The pressure on farm animals to "produce more from less" is ever increasing. Advances in feed formulation and farm management have made it feasible to lower the FCR in broilers and increase egg production in layers. This feasibility, however, is challenged by variations in weather conditions and fluctuating feed quality. These make the bird susceptible to pathogenic microbes which proliferate in the gut and lead to diarrhoea.

The increase in intestinal motility during diarrhoeal conditions reduces feed conversion efficiency in the bird. Toxins in the feed, or produced by pathogenic bacteria like C. perfringens cause various responses from the bird, like inflammation, hypersecretion and loss of gut tissue. These ultimately lead to lowered production in birds, leading to major economic losses.

As the global trend to reduce dependence on antibiotics increases, the alternative use of phytogenic feed additives is gaining more ground. This rationale stems from the fact that phytogenic compounds are relatively non-toxic, leave no harmful residues on meat or eggs and have minimal chances of building up resistance.

Stodi®, an NR-SBP™ (Standardized Botanical Powder) is a polyherbal formulation that aims to help you reduce your dependence on antibiotics. NR-SBP™ works on the principle of preserving the phytoactives derived from plants in their natural coating(tonoplasts), while they get delivered to the animal's gut. A stringent process of standardization and posological interventions have been employed to ensure a minimal variability in the concentrations of phytoactives in Stodi®.

Stodi® consists of a robust set of phytoactives like andrographolides, ellagitannins, punicalgins and various polyphenols. These phytoactives help in controlling different events which occur during diarrhoea. Stodi® has experimentally proven features like astringency activity on the gut mucosa and preventing hypersecretion by reducing the fluidity of the intestinal lumen. It has anti-inflammatory properties and has been proven to normalize intestinal peristalsis. Stodi is also able to reverse damages to the intestinal villi during diarrhoea. The modes of action are linked to the gut enriching effects of the phyto-actives in Stodi, like andrographolides. 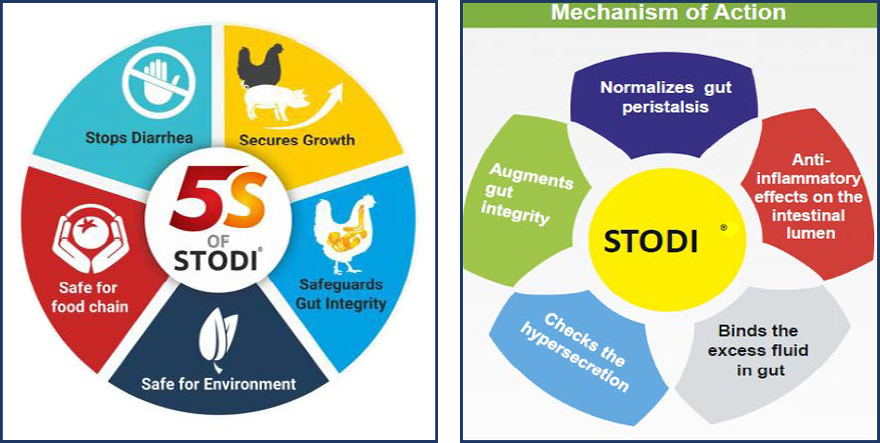 While Stodi helps to safeguard the gut from the physical aspects of diarrhoea, like motility, it has also been proven to enhance the gut immunity and the microbiome. Our in-house trials reported a significant increase in the surface area of GALT (Gut Associated Lymphoid tissue) in the Meckels diverticulum and Ileum. An increase in GALT signifies a superior immune status of the gut, therefore aiding the gut to protect itself from various allergens and pathogenic microbes.

Marimuthu et al., (2019) confirmed that Stodi® was beneficial in increasing the F:B ratio in broilers , a key indicator of superior gut health, by metagenomically evaluating the gut microbe phyla Firmicutes against Bacteroidetes. This increase in beneficial bacterial count lead to an increase in body weight gain and a decrease in FCR, as compared to the diarrhoeal control. It is very likely that the potency of NR-SBP's like Stodi®, containing an effective, standardised quantity of phytoactives are responsible for this improvement in performance parameters. 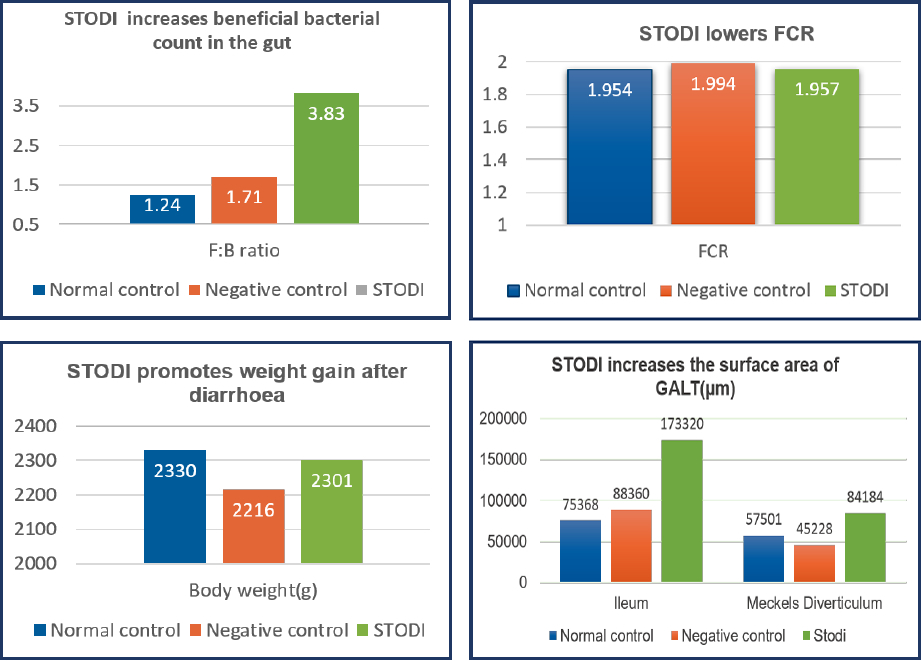 As the awareness of limiting antibiotic usage increases, it is imperative for the poultry industry to seek new avenues to tackle the ever-increasing pressure on the bird to produce more. With the gut playing a pivotal role in production, it has become a necessity to safeguard the gut from external agents like toxins and microbes, while fortifying the gut's defence mechanisms. Stodi® helps your bird dominate diarrhoea convincingly and helps secure your farm's profitability during challenging conditions.

Stodi® is recommended to be used at the rate of 1-2kg/ton of feed, or as per your nutritionist's advice.

Article made possible through the contribution of Natural Remedies
Video >
Technical Paper >
The importance of using the correct phytase at optimal dose
Phytate is a six-fold dihydrogen phosphate ester of inositol, specifically myo-inositol 1,2,3,4,5,6 -hexakiphosphate. Also known as phytic acid, it is considered the main storage f ...
Feed Enzyme Technology: Present Status and Future Developments
Exogenous enzymes are now well accepted as a class of feed additives in diet formulations for poultry and pigs to overcome the negative effects of anti-nutritional factors, and to ...
New enzyme application strategies to maximize feed cost savings, mitigate phosphorus excretion, and reduce carbon emissions
In recent years we are seeing a growing consumer interest in how food is produced, which is influencing the behaviour of the agri-food industry and the manufacture of feed. Althoug ...