As part of Trouw Nutrition's global research webinar series, a download on demand webinar, "Oxides in Livestock Production: Major Risks and Current Alternatives for their Complete Replacement," highlights key concerns associated with using oxide sources of trace minerals to supplement the feed ration – including low solubility, high quality variability and limited bioavailability in the animal. Research exploring minerals' manufacturing and mode of action in the animal suggest these problems can be addressed by using alternative sources of trace minerals, in hydroxychloride-based supplements.

Trace mineral sources provide necessary nutrients for livestock that would not otherwise be part of the basal diet. The addition of trace nutrients, such as zinc (Zn), manganese (Mn) and copper (Cu), can improve the performance of livestock species. Once absorbed by the animal, all trace metals are used the same way. However, minerals in feed only provide nutritional value to the animal when they are absorbed across the intestinal wall into the bloodstream. At that stage, the animal's metabolism determines where and how the trace metal will be used.  The mineral source matters. Some trace mineral sources – such as zinc oxide – are characterized by low levels of solubility and limited bioavailability, meaning they deliver inconsistent amounts of the metal to animals.

Trace mineral deficiencies may result in an animal not achieving its peak performance, while providing too much of the mineral can lead to subclinical toxicity. Uncertainty regarding the amount of mineral absorption occurring in an animal can hamper efforts to formulate diets precisely to meet the needs of specific animals or herds and flocks.

Initially, oxide-based minerals were added to diets to support animal production. Trace mineral nutrition has undergone an evolution. In the 1940s, improvements in sulphate production, manufacturing processes and quality, led to sulphates becoming a preferred alternative to livestock feeding and nutrition compared to oxides. In the 1970s organic trace minerals were introduced to provide improved bioavailability, homogeneity and reactivity as changing genetics needed higher levels of trace minerals. However, the high cost of organic trace minerals coupled with their lower concentration of metals often meant that producers only used them to provide a portion of their livestock's mineral need. 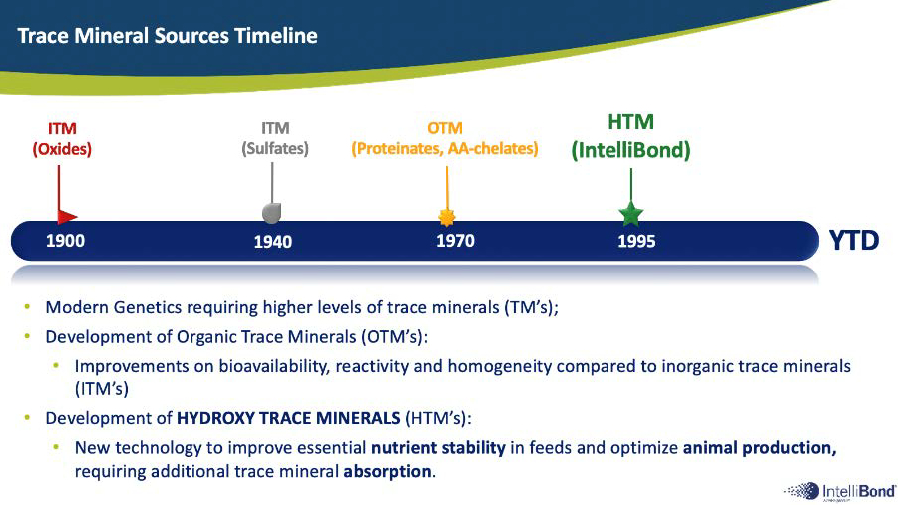 Figure 2  (slide 7) - Trace minerals have been in use since the early 1900s and have developed over time as animal genetics improved.

Zinc oxide use and production methods

Although zinc oxide is a common trace mineral used in animal feed, the inorganic compound (ZnO) is also included in a range of other products such as rubbers, plastics, concrete, batteries, fire retardants and ointments. There has not been great change to how oxides perform when used in feeds as the feed industry is not the primary market for the mineral product.

By volume, the rubber industry consumes the most zinc oxide annually. More than 50% of the zinc oxide generated globally goes into the production of rubber products as the compound is insoluble in water. Similarly, concrete manufacturing accounts for about 30% of the zinc oxide produced. Animal feed use represents about an 8.2% share in the annual industrial use of zinc oxide. In other words, animal feed is not the primary market for zinc oxide and the product was not developed for use in feed.

There are several production methods used to generate zinc oxide – two major processes used are the direct process, also known as the American process, and the indirect process, or French process.

The direct production process uses a range of zinc-containing compounds also named as zinc ores. Compounds are heated to generate metal vapours that are oxidized through air combustion to create zinc oxide. However, because the level of zinc, other metals and impurities can vary widely accordingly to the zinc ore used, the final product tends to have a lower quality than zinc oxide generated through the indirect method. In the indirect process, zinc metal with a purity of 92-99% is boiled to generate a vapour, which is then oxidized. 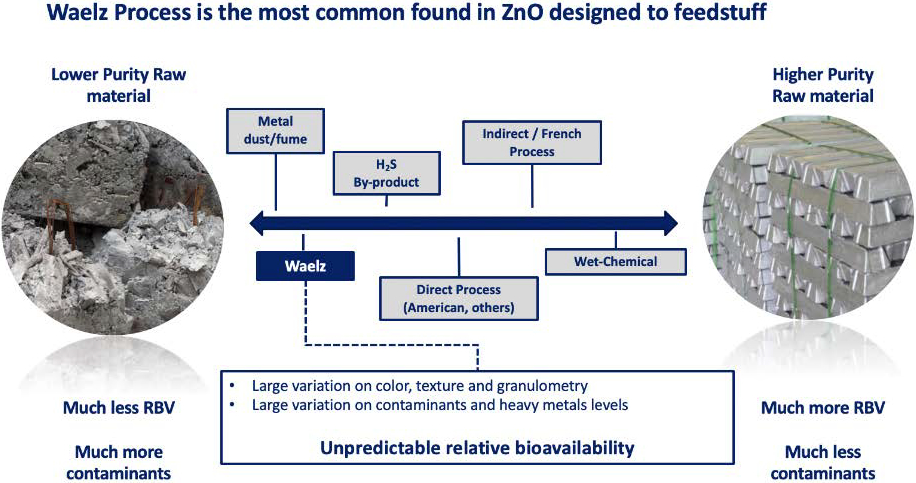 Variations and additional production methods include the wet-chemical process, the hydrosulphide by-product method and the Waelz Process. The Waelz process tends to generate zinc oxide with high levels of impurities including high heavy metal levels. Despite these concerns, the Waelz process is the most common method used to generate the trace minerals intended for use in animal feed or premixes. The pathway produces zinc oxide that tends to vary in colour, texture and granulometry. It also typically has a reduced relative bioavailability value (RBV).

Absorption and bioavailability of zinc

As trace minerals from different sources have a range of absorption efficiencies, they deliver differing levels of the mineral when used in animal feeds. For example, according to the NRC Dairy 2001, when provided at the same level, copper sulphate has a 5% absorption coefficient while copper oxide is at 1%. Similarly, zinc sulphate is absorbed at 20% while zinc oxide is around 10%. Among the different types of trace minerals, oxides are very well known to have lower absorption efficiencies, however, oxide-based trace minerals continue to be used likely because of their low price.

While nutritional guidelines for feed formulation provide estimated efficiency of absorption rates for trace minerals, including zinc and copper, the actual rate of absorption and bioavailability of oxides-based trace minerals may vary and can be hard to predict. In addition to differing results based on product, absorption can be influenced by factors such as species, genetics, gender, physiological state, and animal age.

In this study, three assays looked at livestock weight gain and zinc oxide source – again compared to an analytical, or higher grade, zinc source. The first assay found a range of bioavailability in sources of zinc oxide. The RBV for the minerals in the trial ranged greatly – some zinc oxide sources had RBV percentages of 41%, while others displayed a bioavailability of 89% or 97%. Similarly, second and third assays established a standard regression curve related to the intake of supplemental zinc and looked at different forms of zinc oxide, zinc sulphate and zinc metal. While the relative bioavailability for some sources of zinc oxide approached results found with zinc sulphate, others were much lower and close to results found from using zinc metal which is not used as a supplement in animal feed. The overall variation showed products presenting relative bioavailability values of 39% to 93%.

How zinc oxide is made can greatly influence how bioavailable the trace metal in the supplement is within the animal. Zinc oxide produced through the Waelz process can display great variation in relative bioavailability, which makes it harder to formulate a nutritionally complete ration.  According to the previous study, the ZnO sources presenting lower RBV originated from the Waelz process. Trouw Nutrition conducted a large study with the PARC Institute looking at the use of a selection of zinc oxides, from 18 different suppliers across several different countries and manufactured using multiple processes. In the trial, some zinc sources had an RBV of less than 40%, while others were closer to 60%. However, higher quality zinc oxide is likely to be more expensive and tends to be used more often in areas like the pharmaceutical industry rather than in feed. 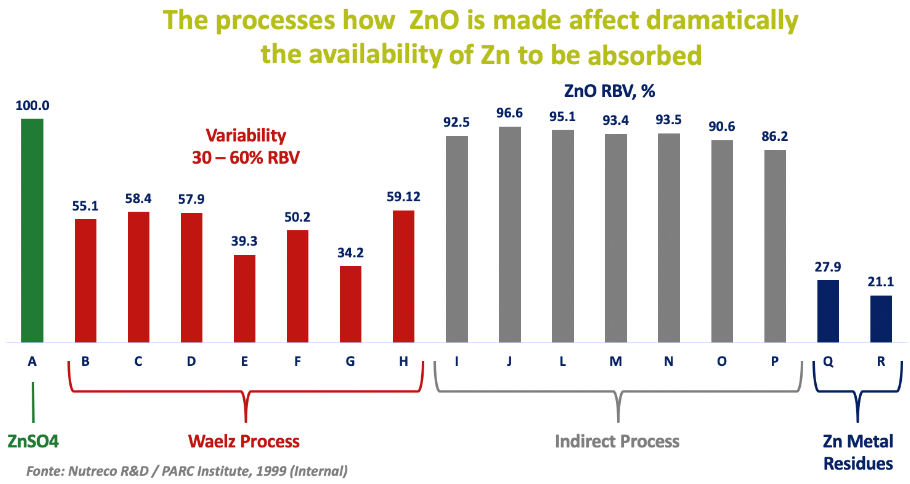 Figure 5  (slide 29) - Research results indicate that zinc oxide absorption rates vary based on the quality of zinc oxide and how it was manufactured.  In general terms, ZnO sources originated from Waelz manufacturing process present the larger variability and lower RBV results.

A research team from the University of Florida, explored the solubility and use of inorganic zinc trace minerals when applied with ruminants. The researchers found that sulphate-based zinc was soluble in a range of solvents, however oxide-based zinc did not dissociate in water, and only partially dissociated in very lower pH buffers such as 2% Citric acid and 0.12 N HCl. When providing trace minerals to livestock, timing of mineral delivery influences absorption. If minerals are soluble too early, which is the case with sulphate sources, they do not reach the absorption sites completely, because of numerous interactions with other metals and antagonists present in the digesta. If they are not soluble enough, which is the case with oxides, they are not absorbable by an animal when the metal reaches absorption sites in the small intestine in a free form. After conducting a linear regression exploring the amount of zinc in animal tissues, researchers found that feed grade zinc oxide had a high variation in RBV when compared to sulphates, in terms of how much was present in different organs and tissues like the kidney, pancreas and liver.

Additional research focused on the solubility of different forms of zinc trace minerals and whether they dissociated in the GI tract – where they would need to be absorbed to enter the bloodstream. Researchers from Trouw Nutrition Masterlab in the Netherlands, examined zinc oxide from different suppliers and produced in several different countries, and compared solubility results to the hydroxychloride trace mineral Selko® IntelliBond® Z. All trace minerals were exposed to a pH 2.0 acidic buffer. Researchers found that 100% of the hydroxychloride-based mineral was soluble in the first 20 minutes. However, none of the four zinc oxide supplements ever completely dissociated when exposed to a pH of 2. Two types of the zinc oxide additive reached a peak solubility of 80 or 90% after about 2 hours. Additional versions of the oxide-based trace mineral examined took four hours to make about 60% of the mineral available. This lack of solubility has tremendous impact in the amount of Zinc that can be absorbed by the animal. 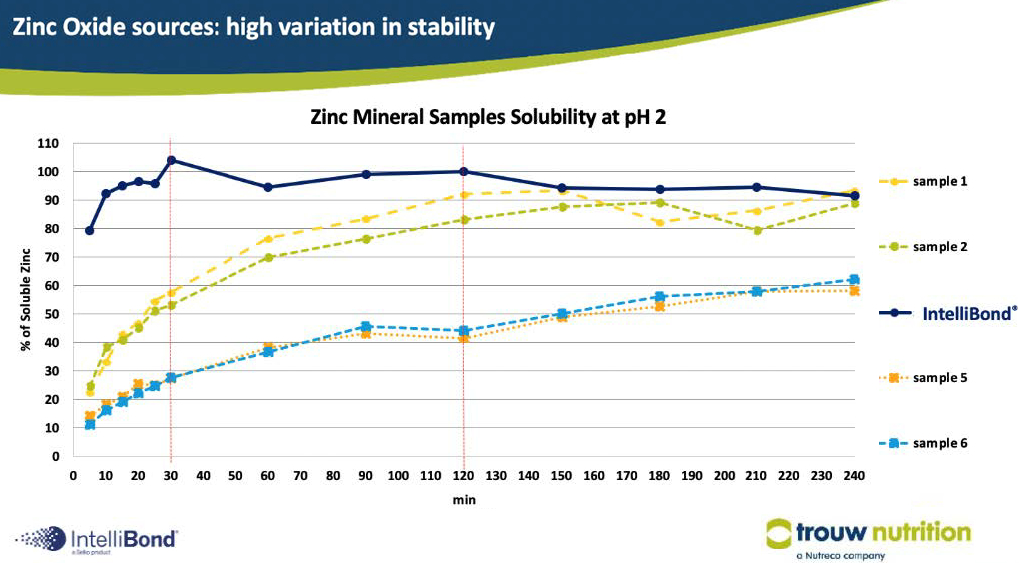 Figure 6  (slide 36) - Solubility of zinc trace minerals changes based on type, meaning differing amounts of the mineral are available to livestock.

In a larger-scale feeding trial done in the United Kingdom, looking at trace mineral use and function, 1,080 male broilers received one of two diets for 35 days. The first diet included 15ppm copper sulphate and 80ppm zinc oxide and the second diet included 15ppm copper from IntelliBond C and 80ppm zinc from IntelliBond Z. Birds were weighed on days 0, 10, 21, 28 and 35. Muscle and blood samples were collected on day 28 to check for gene expression and levels of stress response markers present in blood plasma. Birds receiving the diet with inorganic trace minerals had reduced weight gain, feed intake and overall performance compared to those receiving hydroxychloride-based trace mineral supplements. Additionally, birds getting the hydroxy-based trace minerals had reduced amounts of oxidative stress markers in their blood.

Figure 7  (slide 39) - Comparing the use of IntelliBond minerals and inorganic trace minerals found that the more bioavailable supplement improved performance and reduced signs of oxidative stress.

Selecting trace minerals to use in feeds

Overall, the examination of trace mineral sources found that different types of feed grade zinc oxide can vary in chemical and physical characteristics, while providing varying levels of bioavailability. In addition, the multiple processes and methods used to generate zinc oxide make the prediction of how much of the metal zinc will be available for livestock less accurate and more complicated. Some manufacturing methods — like the commonly used Waelz process — appear to generate zinc oxide with more variation and lower bioavailability compared to zinc oxide manufactured in other ways.