Simple Summary: In animal farming, alternatives to antibiotics are required due to the increase of antimicrobial resistance. In this contest, tributyrin showed the ability to promote gut health, to modulate gut microbiota and to improve protein digestibility, leading also to higher growth performance. However, although the mode of action of tributyrin on the intestinal epithelial cells has been partially explained, its effects on lipid and protein metabolism needs to be investigated. This paper provides information about the influence of tributyrin on production traits, blood parameters, faecal microbiota and faecal protein excretion in weaned piglets.

Abstract: The aim of this study was to investigate the effects of tributyrin supplementation on the production traits, the main metabolic parameters and gut microbiota in weaned piglets. One hundred and twenty crossbred piglets (Large White × Landrace) were randomly divided into two experimental groups (six pens each; 10 piglets per pen): the control group (CTRL), that received a basal diet, and the tributyrin group (TRIB) that received the basal diet supplemented with 0.2% tributyrin. The experimental period lasted 40 days. Production traits were measured at days 14, 28 and 40. A subset composed of 48 animals (n = 4 for each pen; n = 24 per group) was considered for the evaluation of serum metabolic parameters and hair cortisol by enzyme-linked immunosorbent assay (ELISA), and faecal microbiota by real-time polymerase chain reaction (PCR). Our results showed that the treatment significantly increased body weight (BW) at day 28 and day 40 (p = 0.0279 and p = 0.0006, respectively) and average daily gain (ADG) from day 28 to day 40 (p = 0.046). Gain to feed ratio (G:F) was significantly higher throughout the experimental period (p = 0.049). Even if the serum parameters were in the physiological range, albumin, albumin/globulin (A/G) ratio, glucose and high-density lipoproteins (HDL) fraction were significantly higher in the TRIB group. On the contrary, tributyrin significantly decreased the urea blood concentration (p = 0.0026), which was correlated with lean gain and feed efficiency. Moreover, serum insulin concentration, which has a regulatory effect on protein and lipid metabolism, was significantly higher in the TRIB group (p = 0.0187). In conclusion, this study demonstrated that tributyrin can be considered as a valid feed additive for weaned piglets.

1. Introduction
Even if antibiotics remain an essential tool for treating animal diseases, innovative feed additives are required in order to reduce their use in livestock due to increased antimicrobial resistance. In pig  farming, the weaning phase is characterized by high levels of stress resulting in decreased feed intake, growth retardation and a higher tendency to develop gastrointestinal diseases [ 1 , 2 ] that may require the use of antimicrobial compounds. Thus, alternatives include the use of feed supplements able to improve general health status by modulating the digestive process and the intestinal microbiota, such as probiotics, prebiotics and organic acids [ 3 – 5 ]. In light of this, short chain fatty acids (SCFA) play a fundamental role in modulating the intestinal microbial population and in promoting the digestion phase [ 6 ]. Butyrate is a SCFA that is produced by bacteria in the gut [ 7 ]. Aside from its primary function as an energy source for colonocytes, it is a strong mitosis promoter and a differentiation agent for intestinal epithelial cells [ 8 ], as it acts as a histone deacetylase (HDAC) inhibitor [ 9 ]. It showed also in vitro positive effects on hepatocytes [ 10 ]. Moreover, it has a strong antibacterial activity against both Gram-negative and Gram-positive pathogens [ 11 ] and therefore proves to be a valid aid for gut health maintenance. In pigs, different studies showed the improvement of growth performance, the repair of damaged intestinal tissues and the improvement of protein digestibility [ 12 – 14 ]. However, a decreased feed intake associated with its strong odour has been observed when high levels of butyrate were included in the diet. [ 15 ]. Tributyrin is a valid alternative to butyrate, as one molecule of tributyrin releases three molecules of butyrate directly in the small intestine, thus butyrate is rapidly adsorbed. Supplementation of tributyrin showed different in vivo positive effects on growth performance and gut health, also after lipopolysaccharide challenge [ 16 – 18 ]. The higher growth performance and the improvement of protein digestibility suggest that tributyrin could modulate protein and lipid metabolism. Thus, blood metabolites, insulin and leptin, which are positively correlated with body weight and with adipose and also muscle mass, could be modulated by tributyrin supplementation. However, no other studies investigated the effects of in-feed tributyrin on blood metabolites (such as glucose, urea and HDL), insulin, leptin and cortisol in healthy piglets. Thus, the aim of this study was to determine the effects of tributyrin supplementation on the production traits and nutrient metabolism in piglets reared in a conventional herd. In particular, the main blood metabolites, insulin, leptin, hair cortisol and protein content in faecal samples were analysed. Moreover, the effects of tributyrin on gut microbiota were evaluated.
2. Materials and Methods
2.1. The In Vivo Trial
The in vivo trial, complied with Italian regulation on animal experimentation and ethics (DL 26/2014) in accordance with European regulation (Dir. 2010/63), was approved by the animal welfare body of University of Milan (authorization number 31/2019) and performed in an intensive conventionalherd, locatedinLombardy(Italy), freefromdiseasesaccordingtotheexA-listoftheWorld Organization for Animal Health (Aujeszky's disease, atrophic rhinitis, transmissible gastroenteritis, porcine reproductive and respiratory syndrome and salmonellosis).
One hundred and twenty crossbred piglets (Large White × Landrace) weaned at 28 ± 2 days were randomly allotted into two experimental groups, with similar conditions to those under which commercial farm animals were kept before the first day of the trial (six pens per group; 10 piglets each, 50% female and 50% male) After one week of adaptation, the control group (CTRL) received a basal diet, while the tributyrin group (TRIB) received the same basal diet supplemented with 0.2% of tributyrin (Ferraroni Mangimi SpA, Bonemerse, Italy). The iso-energetic and iso-proteic diet provided fulfilled the National Research Council NRC [19] requirements (Table 1). The experimental period lasted 40 days, considering day 0 the first day the two groups received the two different experimental diets.
Piglets of both experimental groups were reared in a unique room, with environmental controlled conditions (temperature: 27◦ C; humidity: 60%). In particular, the room had an unobstructed floor area available to each weaner piglet of 0.40 m 2 , according to the Directive 2008/120/EC. Feed and water were provided ad libitum.
Table 1.  Composition of the basal experimental diet. In the tributyrin (TRIB) group, 0.2% of corn was substituted with 0.2% tributyrin. 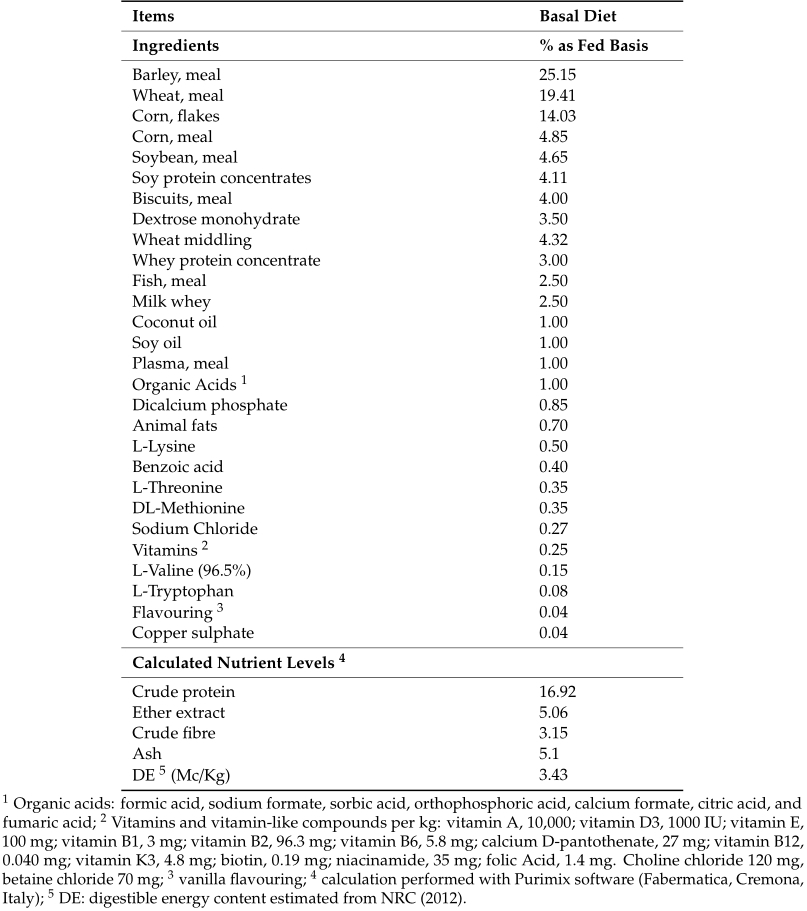 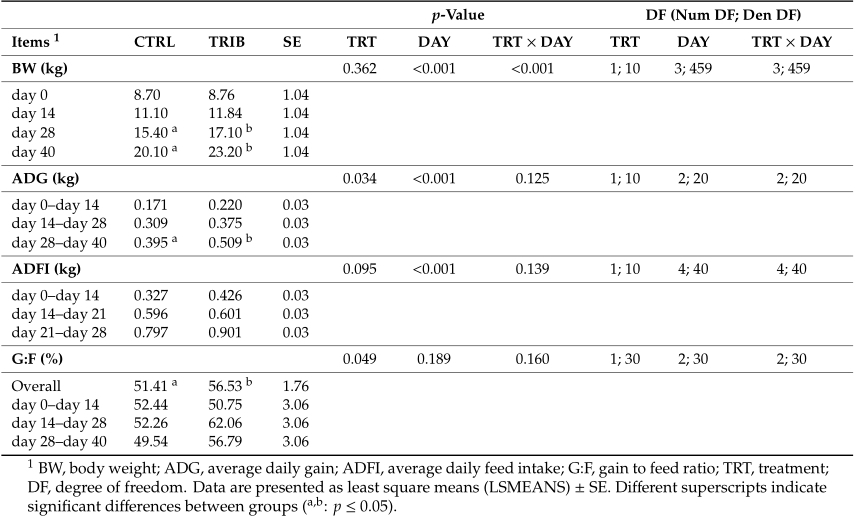 Table3.  Serumconcentrationsofthedifferentparametersanalysedinpigletsfedonadietsupplemented with (TRIB; n = 60) or without (CTRL; n = 60) 0.2% tributyrin. 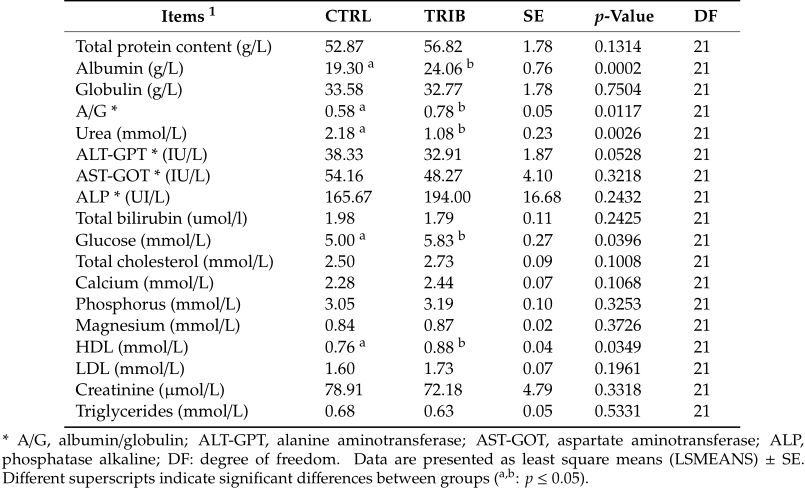 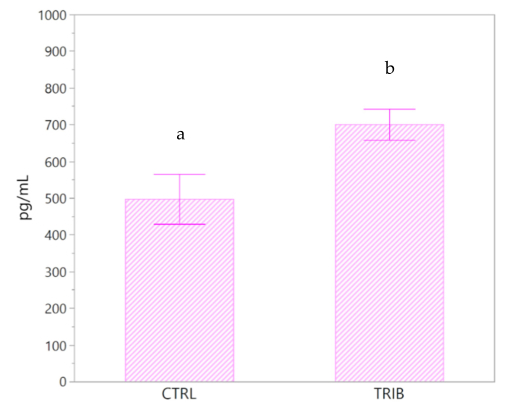 Figure 1.  Serum insulin concentrations (pg/mL) in the control group (CTRL) and in the group of piglets fed a diet supplemented with 0.2 % tributyrin (TRIB). Data are presented as the mean ± SE. a,b: significant differences between groups (p = 0.0187).
3.5. Cortisol Concentration
Hair cortisol differed significantly between the TRIB and the CTRL groups (p = 0.018, DF = 10). The average level of cortisol with the standard error (SE) of the CTRL group was 9.9 ± 0.63 pg/mg  (Figure 2). 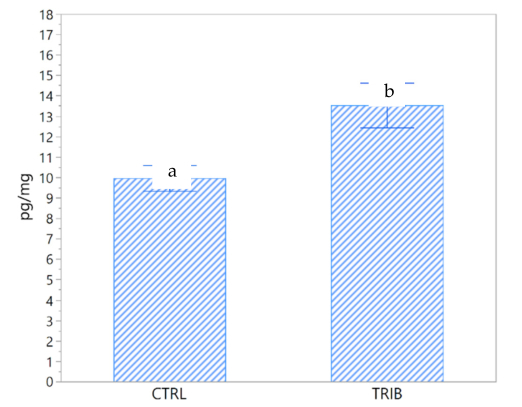 Article made possible through the contribution of Matteo Dell'Anno et al.