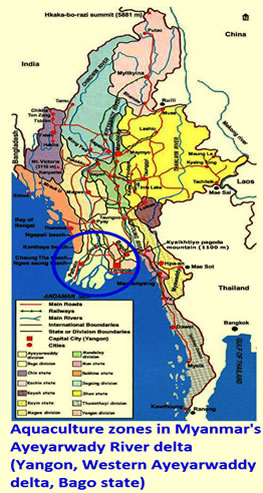 Although Southeast Asian aquaculture is seen as a maturing aquaculture region, Myanmar is an exception to this generality. Economically underdeveloped, with a traditional diet consisting of rice and fish and countless unexploited freshwater growing areas, Myanmar's resource rich, low output aquaculture sector stands in stark contrast to the intensive, overdeveloped fish farming found in neighboring ASEAN countries.
After being disconnected from the world economy for 50 years, stereotypes about Myanmar's aquaculture sector turn out to be only half true. On one hand, official statistics grossly exaggerate aquaculture production levels. On the other hand, new studies imply that much like late 20th century India's poultry sector, Myanmar aquaculture is multiplying its production volume every decade, but has not yet caught the world's attention.
Due to Myanmar's unreliable government statistics, unconventional methods have been used to evaluate its aquaculture production, scale and growth trend. For example, according to a University of Michigan study sponsored by USAID (Development Paper #139, 'Aquaculture in Transition: Value Chain Transformation, fish and food security in Myanmar', December 2015), "Satellite imagery identified more than 200,000 small backyard ponds in the southern [Ayeyarwady River] delta. Satellite data shows that on average, the pond acreage of these two regions roughly doubled from 2000 through 2005, then grew by nearly 3% annually over the next decade.
Using highly detailed satellite photos and ground level surveys to adjust UN FAO data, USAID's study determined that output has jumped 10-fold, with an average growth rate exceeding 18% over the past 15 years –though most of the superfast growth occurred prior to the late 2000s. From approximately 99,000 tonnes in 2000, aquaculture production totaled 823,000 tonnes by 2010 and exceeded a million tonnes last year.

More specifically, from 2004 through 2014, pond area increased by 2.7% annually and yields by 5.8%, making for an 8.7% average growth rate over that decade. Even this growth rate would have been even higher, were it not for the inflection point the industry currently faces.
Despite a tropical coastline slightly over half the length of Thailand's, 95% of aquaculture is done within inland freshwater bodies situated along the Ayeyarwady River delta's numerous tributaries and their associated freshwater lakes, ponds and wetlands. Rice paddies in particular, are used to grow fish during their fallow period, with fish waste helping fertilize the next crop.
The largest proportion of fish farming occurs within 50km of the former capital, Yangon (a.k.a. Rangoon), near where the delta's tributaries reach the coast. Fish farming of comparable scale also occurs 100km to 200km southwest of Yangon, in western Ayeyarwady River delta tributaries near the city of Pathein.
Most fish are grown in ponds designed to store rainwater for rice paddies. USAID's report notes that, "Field visits confirm that they are increasingly used for growing fish." Satellite photo analysis implies that both the actual number of farmed fish ponds and existing fish pond acreage more than doubled over the past 15 years. It is this multiplying of both the number of ponds and the surface area of existing ponds –not intensification– which enabled Myanmar's aquaculture output to take off.
It adds the early development of the Yangon and western Ayeyarwady delta regions is due to the fact that, "Transport times are low, boats can use the river system to deliver fish and feed, energy grids exist, and water is neither too abundant nor too scarce." Another reason is because most domestically consumed aquaculture products end up in Yangon's San Pya Market, while exports are shipped from ports near Yangon itself.
Due to the sector's low technology and outdated farm management methods, from the early 1990s through to the mid-2000s, production increases were achieved by expanding pond areas instead of boosting stocking densities. That resultant 'maxing out' of available pond areas around Yangon and in the southwestern Ayeyarwadddy delta, forced producers to attempt to raise more fish in the same pond space. This is one reason why, from 2004 through 2014, productivity a first rose quickly but soon tapered off.
According to the USAID study's estimates, this decade saw pond area increase by only 2.7% annually but yield per pond hectare increased at a CAGR of 5.8%. The only problem is that exceptionally large but "easy" productivity gains occurred prior to 2010 –from 2010 through 2014, yield growth per pond acre decelerated to a far slower 2.3% annual rate.

With the sector's low productivity making the boosting of stocking density problematic, growth momentum was only maintained by opening up new areas. As a result, the new production frontier has opened up in Bago state. Located northeast of Yangon in an upriver portion of the delta, the southern half of the Bago region has a myriad of undeveloped potential pond areas that are accessible by roads leading to coastal markets.
Even here however, there has been a flattening out of new pond acreage: the exploitation of Bago's northern frontier regions require the construction of roads that will connect it to coastal areas. The good news is that so long as the government constructs new infrastructure, Myanmar fish farms are actually capital rich enough to take advantage of the opportunity.
Interestingly, compared to neighboring (and more highly developed) Thailand, Myanmar's fish farming is more highly consolidated, with USAID noting that a handful of domestic integrators operate over half of its aquaculture sector pond area. These integrators also operate their own hatcheries and provide broodstock to smaller operators. Its analysis, "suggests the existence of a bifurcated sector, however, with small
farms, often family managed and owned catering to the local demands and large farms, often vertically integrated catering to the export markets."

Even at this early stage of development, exports account for roughly 10% of output or 100,000 tonnes annually. Unfortunately, over 95% of exports consist of low-value, carp-like species (eg. rohu, mrigal, catla, common carp). They are mostly shipped to countries with large expatriate South Asian populations. Kuwait (34%), Saudi Arabia (18%), Bangladesh (17%) and the United Arab Emirates (12%) take in over 80% of these shipments.
Although exports have risen from almost nothing in 2004 to near 150,000 by 2017, trade prospects are limited over the next decade. Both domestic production and exports are dominated by low-value carp-like species, which are only popular among Indians and Chinese. With China's market self-sufficient in carp and the Persian Gulf's 12 million expatriate Indian population limited, Myanmar needs to diversify its aquaculture species base before trade can be further developed.
--Besides, unlike neighboring Thailand where 80% of seafood consumed comes from aquaculture, in Myanmar, only 20% or approximately 5kg of the 25kg of per capita seafood consumption farmed. Consequently, there is much potential to substitute aquaculture in place of wild catch, and also for outright consumption gains. In particular, the USAID study noted that whenever a family moves up a quintile (20%) on the country's income scale, its fish consumption per capita rises 16% --but per capita consumption of aquaculture derived seafood products jumps by a much higher 34%.
All this dovetails with an earlier study by Larive International ("Poultry expert visit 15-19 March 2015"), which predicts that that the number of Myanmar citizens with middle class incomes and capable of affording western protein consumption levels) will jump by 400% over the next 10 years –from 3 million of Myanmar's 53 million people in 2015 to 15 million of its projected 60 million population in 2024.
With a quarter of the country's population poised to rise by one or more income brackets and the rest of the country's people steadily growing more prosperous, we can expect per capita aquaculture seafood consumption to rise from today's 5kg to at least 8kg by 2025.

While this creates huge opportunities for early investors, the extent of the industry's raw, underdeveloped state cannot be emphasized.
For example, 85% of production and 95% of exports are accounted for by a carp, a species which is notoriously hardy and known to withstand negligent or unhygienic pond conditions. Higher value, more easily exportable species such as shrimp and tilapia saw their output multiply by up to ten times in slightly over five years –and since then, their output has remained stubbornly stuck in the 50,000 tonne range.
The industry's backward fish cultivation techniques make a good fit with carp, which are traditionally raised in farm cast-offs such as poultry manure and resist polluted water conditions. Larive's report noted, "a lack of knowledge on farm management", particularly with respect to "hygiene, best practices and a failure to appreciate basic biosecurity management." Antibiotics are not merely 'overused' to enable the cultivation of resistant species like carp in poor living conditions: Many operators use them right up to the day of slaughter, resulting in high human antibiotic levels in much of Myanmar's farmed seafood.
Consequently, Myanmar's aquaculture sector is approaching a cross-roads. One-off productivity gains from the introduction (and overuse) of antibiotics have been actualized, rapid production gains cannot come from merely expanding pond acreage. While it is still growing rapidly, this account for the sector's post-2010 growth deceleration.
The good news is that given its mostly untapped and unused resource endowments, Myanmar aquaculture's growth rate can do more than rise back to levels seen ten years ago: By moving away from carp to more value-added species, it could boost returns to all-time high levels not yet seen. For foreign suppliers of everything from feed inputs to aquaculture supplements and pond filtration technology, this country has everything it takes to become one of the world's most promising frontier markets.
The bad news is not the large investment sums all this will take (and which the industry can surely attract): Before they can leverage imported natural supplements, better aqua feed ingredients or state-of-the-art water filtrations systems, Myanmar's fish farms have to adjust to a more value-added mindset: If they attempt to use such imported technologies for the mere minimization of unit costs, they will repeat the mistake they made in overusing antibiotics: The latter resulted in flat shrimp production and unsafe drug residue levels in seafood.
Thus, the question of whether Myanmar aquaculture growth will accelerate is intimately tied to the question of whether it can diversify away from carp into more value-added species. Carp cultivation's rapid growth will inevitably taper off.
Fortunately, a new mindset could trigger sustainable, stocking-density driven growth spurts in the cultivation of shrimp, white fish species and mollusks. The only question is whether domestic Myanmar fish farmers can learn in a few short years the production sustainability/stocking density lessons that neighboring Southeast Asian integrators took decades to learn (and are still learning)?
In retrospect, Myanmar opened its doors to foreign investment just in time for its aquaculture sector days of easy, carp-driven growth came to an end. Investors should monitor opportunities in existing Yangon region and western Ayeyarwady production zones –and also keep track of government investments that could open up the cultivation of frontier pond areas in states like Bago.
Going forward, we expect multinational integrators to leverage this country's untapped marine resources and consumer markets by using the business models they have fine-turned in neighboring countries such as Thailand, China and Vietnam.