In recent years we are seeing a growing consumer interest in how food is produced, which is influencing the behaviour of the agri-food industry and the manufacture of feed. Although originally the pressure was a requirement to improve animal welfare, more recently the environmental impact of feed production has become one of the focus areas. Animal production teams and nutritionists together should specifically examine how to optimise animal protein production not only from a cost and yield improvement perspective, but also considering sustainability factors. Two critical areas to consider are contamination through manure and the contribution to climate change via greenhouse gas emissions. The agrifood industry in general is subjected to significant pressure to improve its environmental credentials and indeed 26% of consumers have stated that they are highly aware of sustainability when buying meat products (Feed Strategy 2019).

The environmental contamination derived from pig and poultry production is a significant societal issue. The manure originating from the farm has a high concentration of nitrogen and phosphorus that if not contained properly, may pollute groundwater and escape into waterways. This would result in the uncontrolled production of phytoplankton algae (eutrophication) and damage the local ecosystem. Since the environmental impact is well understood, regulations and directives have been introduced in Europe to reduce the mineral excretion associated with animal production.

One of the most common methodologies for calculating environmental impact is to determine all emissions in CO2 equivalents (CO2e). One method to do this is to use an accredited model based on IPCC (Intergovernmental Panel on Climate Change) standards. Emissions are corrected for all their polluting factors, expressing them as a single value. Based on a standard IPCC method, feed accounts for around 70% of these emissions for pigs, reinforcing the importance of nutritionists in reducing feed emissions related to pig production.

But the fact is that animal production with similar productive yields and costs can still differ markedly in CO2e/kg of meat. This means the environmental impact of a production system needs to be considered separately from productive or economic benefits. Improving the use of nutrients in the diet will still be key to reducing this value. When the model is used to compare different feeding programs, any effect on CO2e is calculated from the combination of changes in feed composition and animal productive performance. For example, a diet with a low protein content and therefore with less inclusion of soybean meal, will most likely have a lower amount of CO2e per ton of feed, but if the production rates are not so good, the CO2e per kg of meat produced are unfortunately higher. However, if the productive animal performance is not penalised, the CO2e per kg of meat produced will be lower. At the same time, it is also likely that the cost of the diet has been reduced, giving a "win-win" situation.

Reduce the impact with feed enzymes

A specific example to show improvements in environmental impact is through the use of exogenous enzymes in feed formulation. Enzymes have long been recognised as a way to reduce environmental impact, improve animal performance, and lower the cost of feed. In general, the use of exogenous enzymes in animal nutrition has been fundamentally based on the destruction of antinutritive compounds, which increases the digestibility of nutrients and improves productive yields.

In recent times, our understanding in each of these areas has progressed, and it has opened new opportunities to exploit the full potential of the application of enzymes in animal feed.

Extensive research has been carried out to determine the effect of enzymatic application aimed at degrading both phytate and non-starch polysaccharides (NSP) in the diet, thus reducing the antinutritional effects of both substrates. The negative effect of phytate can be significantly reduced by using phytases, which will be responsible for breaking down the phytate molecules releasing phosphorus and other nutrients such as some minerals and amino acids. On the other hand, the use of carbohydrases, in addition to reducing the viscosity in the intestinal tract and improving the overall digestibility of the diet, also changes the structure and characteristics of fibre in the gastrointestinal tract improving productive yields. One of common practice of including enzymes pays off when it comes to achieving a reduction in feed costs when matrix values are used.

The first strategy contemplates the addition of additional phytase "at higher" than normal levels. This strategy is known in commercial and scientific literature as "superdosing" and aims to improve performance by further hydrolysing phytate thereby reducing its antinutritive effects.

The second strategy involves incorporating higher levels of phytase in combination with a carbohydrase and its respective matrix value in order to achieve a more pronounced cost reduction. A matrix considering minerals, amino acids and energy is applied to the combination of enzymes which results in a perfectly balanced diet (and hence lower CO2e) and at the same time provides greater cost savings while maintaining productive performance. With this approach care must be taken to ensure there is adequate substrate (ie phytate) in the diet. This defines the Maximum Matrix Nutrition (MMN) strategy.

A recent study carried out in fattening pigs in the US (Figure 1) demonstrates the benefits of MMN over a control diet, which contains standard levels of phytase or compared with "superdosing". The results show that superdosing with phytase significantly improves the productive yields of the animals, while the use of MMN offers the same performance but at a lower feed cost (5 euros/t).

The use of high doses of phytase not only adds value in terms of performance or cost savings, it can also be used to reduce phosphorus excretion and therefore environmental pollution. For example, globally the pig population consumes seven million tons of inorganic phosphate (dicalcium) annually and 64% of the dietary phosphorus consumed is excreted in faeces and urine. If we analyse the data in more detail, the use of phytase to replace 1.0–2.0 g/kg of inorganic P (phosphorus) supplied in the diet implies that it could reduce inorganic phosphate supplementation by 38-76%. Internal AB Vista studies have shown that faecal phosphorus can be reduced by 25% in the growing phase and 17% in the finishing phase by supplementing the diet with traditional levels of phytase (500 FTU/kg). However, the use of a superdosing level of phytase (2,000 FTU/kg) reduced faecal phosphorus by 30% during the growth period and by 25% during the finishing period (Figure 2).

The increasing interest in understanding better how the different processes in the agri-food production chain influence the carbon footprint has made it possible to develop methodologies that evaluate these processes. As a result of the development of these methodologies, we can now quantify the contribution of phytases not only in reducing P excretion, but also in N and CO2e emissions.

In the same study described above, the carbon footprint of each experimental treatment was determined, and it was observed that CO2 emissions are reduced by applying the superdose strategy (numerically) or the Maximum Matrix Nutrition strategy (P<0.05) compared to the control diet (Figure 3). Depending on the additional gain achieved in this trial, superdosing reduces CO2e by 1.61 kg CO2e/pig whilst MMN reduces it by 6.19 kg of CO2e/pig.

The use of enzymes favours greater the environment by reducing CO2e, nitrogen and phosphorus emissions, due to greater efficiency in the use of raw materials as well as the opportunity to reformulate diets taking matrix values into account. In this context and with respect to the commitment to the environment, AB Vista offers flexible strategies, such as Maximum Matrix Nutrition, that help to obtain better economic results thanks to recent developments in our understanding of the mode of action of phytases, of the substrate level in raw materials and the response that can be expected by providing greater profitability in animal production. 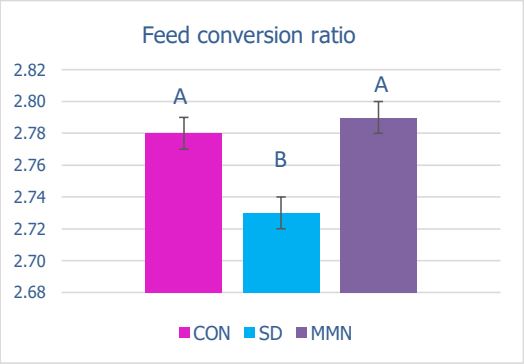 FIGURE 2. Amount (g/day) of phosphorus in pig faeces in the growing and finishing phases (P <0.05).

The positive control (PC) was formulated according to the requirements of the animal. The negative control diet (NC) was reduced in Ca and P levels with no inorganic phosphate added. 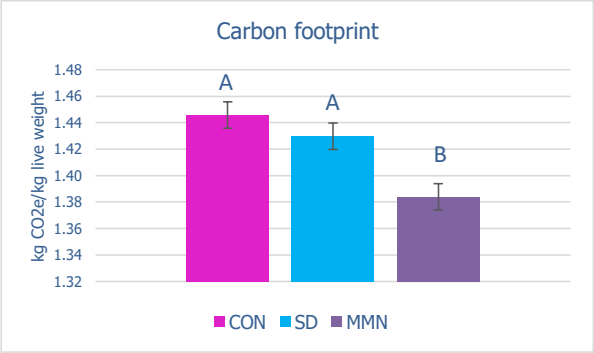 For more of the article, please click here.
Article made possible through the contribution of G.Cordero and G.Ortiz AB Vista
Video >
Technical Paper >
Raising the phytase podium
Phytate is the main storage form of phosphorus in all grains, which represent the basis of most plant-based diets used in animal production. To improve phosphorus availability and ...
Exogenous enzymes as zootechnical additives in animal feed: A review
Enzymes are widely used in the food industry. Their use as a supplement to the raw material for animal feed is a current research topic. Although there are several studies on the a ...
The evolution and application of enzymes in the animal feed industry: the role of data interpretation
Enzymes have been used commercially for nearly 40 years and save significant costs through sparing of expensive nutrients but the mechanism by which this is achieved is still debat ...