September 13, 2019
Two-way volatility for beans, only one direction for corn: Prices firm up prices as a flat, bearish USDA report hides scope for price volatility
Nominally unchanged corn estimates belie the crop's immature state going into Autumn and upward potential. Beans keep bobbing up and down with the US-China trade war.
By Eric J. Brooks
An eFeedLink Hot Topic 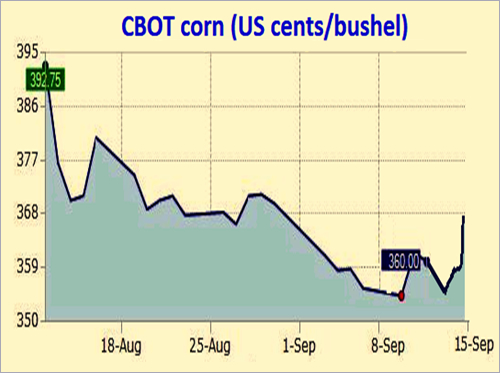 Back in June, we noted that it was possible but not likely that Nature would bless such late planted corn with several consecutive months of near-ideal growing weather -but it Nature did exactly that.
That undermined our earlier predictions of late summer corn price inflation. Even so, we urge a note of both caution and opportunity: In most years, northern hemisphere weather's impact on grain price volatility has faded by mid-September -but this is not a normal US corn growing year.
Keeping its estimated planted acres for corn (90 million, 82 million harvest) and beans (76 million, 75.9 million harvested), the USDA's September WASDE report was implicitly deflationary for corn -but its price actually firmed up! Traders openly defied the report's deflationary message.
On one hand, the USDA downgraded its corn harvest estimate by an immaterially marginal (and bearish) 0.7%, from 353.09 million tonnes to 350.52 million -six million tonnes or 2.2% more than the 344.2 million tonne average figure analysts surveyed by Reuters had expected. It reflected the USDA's nominal downgrading of the projected corn yield from 169.5bushels/acre to 168.2bushels/acre, significantly above the 166.7bushels/acre expected by the analyst community -and quite different from the 160-163bushel/acre figure most analysts expect the agency to arrive at post-harvest.
While its forecast for closing US corn inventories at the end of the 2019-20 marketing year stayed roughly constant near 59.5 million tonnes, its opening inventory was bumped up by a somewhat deflationary 2 million tonnes or 3%, to 62 million tonnes. While ethanol demand for corn was adjusted down 0.64 million tonnes, this less than 0.5% drop was too little for biofuel to materially impact the market.
Moreover, the USDA's world corn forecast also held steady. 2019-20 world corn production was downgraded a mere 0.1% and is still expected to be approximately 1.3 billion tonnes, with output outside China reduced by 0.3% and less than a million tonnes. 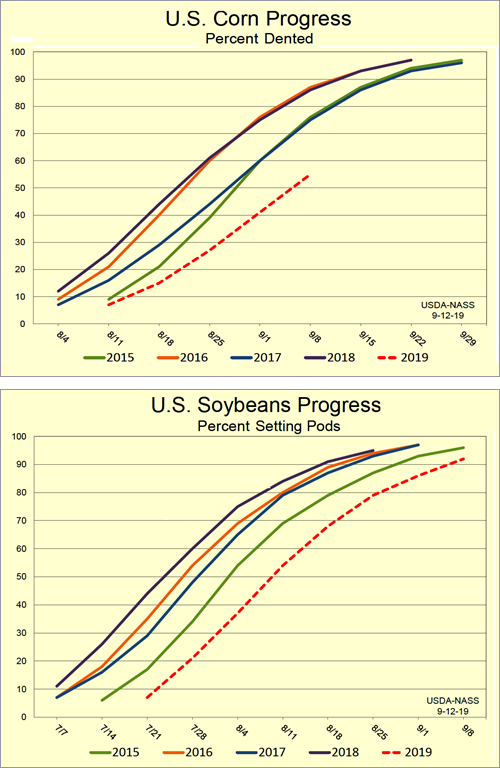 Hence, the needle barely moved on the world (excluding China) corn stocks-to-use ratio, moving marginally from 13.1% to 13.0%.
--On the other hand, it should be noted that 13% is on the border between normal and low world inventory levels.
Furthermore, the market openly defied bloated USDA supply estimates: CBOT corn jumped from a low of US$3.56/bushel a few days before the report to close at US$3.68/bushel within hours of its release --with December corn selling at US$4.06/bushel. Here is one reason why it did so: Even if no bad weather interferes with optimistic USDA harvest estimates, a ratio at this level should push corn above US$4.00/bushel by the end of this year.
The market is clearly projecting higher corn prices going forward, with a slight discount that reflects the uncertainty of South America's upcoming growing season. It also reflected Japan's conditional commitment to source most of this year's corn imports from the US, as part of a tentative trade deal that is to be signed soon. While the USDA did not change its 52 million US corn estimate in response to Japan's willingness to purchase most of its corn from America, it still impacted market psychology.
Interestingly, while corn is more vulnerable to Autumn weather, beans reacted strongly, rising 3.5% upon its release, to US$8.95/bushel. While the USDA's bean estimates were slightly more inflationary, they were not so by much. Yes, the US bean crop is 25% smaller than a year ago, but this is not a new estimate: September's report downgraded the soy harvest estimated by less than 2% to a still large 98.87 million tonnes.
While world inventories were reduced to below 100 million tonnes for the first time in a few years, at 99 million tonnes and a world stocks-to-use ratio of 27%, abundant bean supplies justify a price rally way less than corn does, as the latter is in much shorter supply.
In reality, beans responded far more to China temporarily suspending its 25% tariff to allow the tax-free importing of up to 5 million tonnes of US soybeans. It roughly coincided with news of China purchasing a 600,000-tonne cargo of US soybeans. -That implies that once China buys its 5 million tonnes of US beans, unless it inks a  new trade agreement with America, the soy complex could fall back very quickly.
--Even so, against all this bearishness and three months of failed price rally predictions, market observers continue to believe the USDA is overestimating this year's harvests, particularly for corn.
In a 12 September 2019 interview with Successful Farming, Jack Scoville, an analyst with PRICE Futures Group, stated "Yields will eventually come down more, as they do not jive with what I am hearing from the country… corn should come down more and maybe into the lower 160's [bushels/acre]. The soybean ending stocks are down into a realistic area, corn ending stocks disappointing [too high]." Scoville concluded "a short-term pop [in prices] is in order if not more."
In truth, feed crop markets were responding less to the USDA report said and more to what it did not say: That same morning several weather forecasting firms predicted frost or an overnight freeze in the northern half of Midwestern corn and soybean growing regions around Monday September 23.
On one hand, the accompanying graphs show that as of mid-September, 91% of the soybean crop had set bean pods, compared to around 95% in most years -and the difference is immaterial.
-On the other hand, due to this year's flood delayed planting, only 55% of this year's corn crop is dented, compared to around 85% in a normal year.
Consequently, if this year's first frost or night time freezing reaches America's northern plains around September 23, 15% to 20% of the corn crop is still not sufficiently mature. If one excludes corn growing in warmer, more southerly regions, that still puts 3% to 10% of this year's corn harvest at risk of being destroyed by cold weather. That in turn, could reduce this year's harvest into the 325 to 340 million tonne range, lower projected world inventories by 10 to 25 million tonnes -and push the world (excluding China) corn stocks-to-use ratio into the inflationary 10% to 12% range.
At this point, soybeans are volatile in both directions: While the bean crop is too mature to be damaged by weather, its fate depends on everything from yield adjustments (or lack thereof) to the outcome of unpredictable US-China trade negotiations.
On the other hand, corn was trading near its US$3.50/bushel price floor when it jumped 3% in the face of a USDA report that did bulls no favors. Not only is corn in short supply but its current sub $4/bushel price may discourage its planting in Latin America. With barely 60% of this year's crop mature at the time of this article's mid-September publication, the odds of an early frost slashing yields and this year's harvest is high at this time.
Hence the potential for an early Q4 corn market rally of 30% or more.