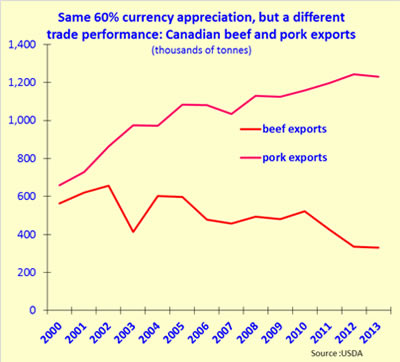 Like their American cousins, Canadians were eating nearly 40kg of beef three decades ago before this red meat's rising relative cost and alleged health effects caused consumption to decline. Curiously, for most of the past 35 years, Canadian per capita incomes (after income and sales taxes) have been 25% to 30% below US levels. Indeed Canadian per capita incomes only approached US levels over the last half decade.
Nevertheless, Statistics Canada reports that per capita beef consumption only fell from 38.8kg in 1980 (roughly on par with US per capita beef consumption at the time) to a USDA estimated 28.1kg in 2013. By comparison, even though Americans had substantially higher incomes, lower unemployment and even lower meat prices throughout this 33 year span, the USDA estimates that America's per capita beef consumption fell from 39kg in 1980 to a projected 24.4kg in 2014.
The reason why Canadians, after enduring 30 years with incomes substantially lower than Americans eat 15% more beef is due to a unique domestic market anomaly: Canada's poultry sector has its production levels constrained by marketing boards to such an extent that in Canada, unlike in the rest of the world, chicken costs more than pork. 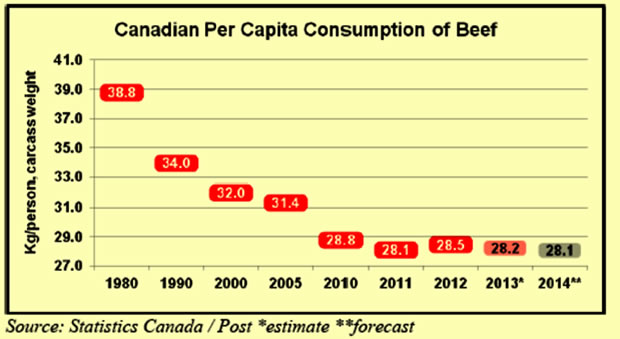 As a result, Canadians had less of a financial incentive motivation to substitute chicken in place of costlier red meat, such that per capita consumption of beef and pork remain several kg higher than in the US, while per capital chicken consumption remains some 25% below US levels. Although Canadian per capita incomes have now caught up to that of the US, the difference in red meat consumption persists: from 2013 to 2014, per capital beef consumption is dropping by 0.1kg in Canada but by 1.2 kg in the United States.
But while Canadians may eat more beef, the country's cattle sector cannot escape the impact of last year's severe Midwestern drought, or its impact on feed costs and supplies. Although Canada's decline in beef cattle numbers is nowhere near as drastic or longlasting as that of its American neighbor, two consecutive years of high feed costs induced a sharp enough fall in inventories to impact exports.
Moreover, while the prospect of excellent US corn and soy harvests and correspondingly large Canadian rapeseed and wheat harvests have pushed feed costs down, cattle prices have also fallen, thereby mitigating the beneficial impact of lower production expenses. Hence, after contracting under the weight of high feed costs in 2012 and 2013, 2014 will see beef cattle numbers stabilize, down by a USDA projected (but immaterially nominal) 0.60% in 2014.
High chicken prices boost beef consumption
But even so, recent years has seen the Canadian beef cattle herd contracting considerably less than its US counterpart, falling from 3.96 million head in 2012, to a USDA estimated 3.93 million in 2013 and 3.90 million next year. Part of the reason is because of the above mentioned higher relative cost of Canadian chicken and the correspondingly higher (and more resilient) beef consumption levels found in Canada.
But there's also another reason: With long-term, multi-year drought profoundly denting US pastureland (and beef cattle production) in America's southwestern states, in recent years, American feedlots and slaughterhouses found it increasingly more cost-effective to import finished or semi-finished beef cattle from Canada. 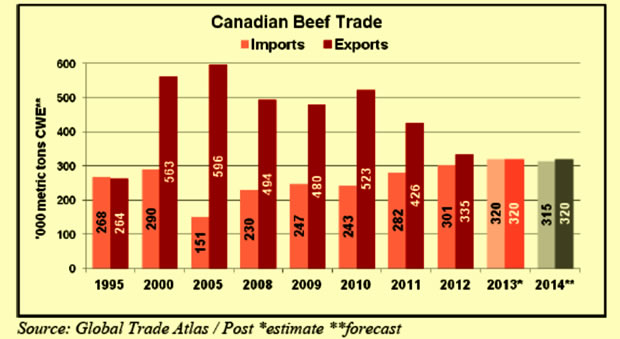 Closed slaughterhouses boost cattle exports
Indeed, the number of finished or near-finished cattle being exported to the United States was boosted by two development over the past 1.5 years. First, the second quarter of 2012 saw financial problems close a large, co-operatively owned Levinoff-Colbex beef plant at St-Cyrille-de-Wendover, Quebec. As Canada's domestic market is 1/10th the size of America's and there are only a few, large scale cattle slaughtering facilities, the closure of this plant forced many cattle producers in eastern Canada to send their culled animals to nearby US plants for slaughter.
The Canadian dollar fell against the US dollar at this time. This made it cheaper for US slaughterhouses to import the cattle after new Canadian environmental regulations made it more expensive to operate cattle slaughterhouses in that country. Moreover, American slaughterhouses are facing falling US cattle inventories, which made the inducement to import these cattle into the US all the stronger.
Roughly six months later, one of the country's largest cattle slaughterhouses in Brooks, Alberta was ordered closed when it was found to be taking inadequate safeguards against BSE contamination of meat. The plant's proposed resumption of full operations was again delayed in the first quarter of 2013, when JBS took over its ownership from XL Foods, creating legal obstacles.
This boosted beef cattle exports to the United States from 720,000 in 2011 to 821,000 in 2012 and 935,000 this year. In fact, given Canada's soft dairy market, the accompanying graph shows that exports of even non-beef cattle were boosted too. However, the expected resumption of full slaughtering operations at the Brooks, Alberta slaughterhouse and a partial recovery in the Canadian dollar's value is being offset by the fact that America is regaining its advantage in feed costs over Canada. All this is expected to cause beef cattle exports to the US to taper off to 915,000 in 2014.
Going forward, a higher number of heifer being retained for herd replenishment is being offset by higher cattle prices, which is inducing farmers to slaughter a higher proportion of their existing beef cattle. The wider spread between cattle prices and feed costs is inducing ranchers to accelerate their slaughtering of cattle, which should offset the slightly higher number of heifers replacing released cattle. The USDA opined that, "Improved cattle prices have prompted [Canadian] producers to send cows to slaughter in a sustained manner throughout 2013, a trend expected to continue into 2014, thus offsetting the higher rate of [heifer] retention."
Indeed, the conservative attitude of Canadian ranchers towards herd expansion can also be seen in cattle weights: After rising in 2012 in response to the prevailing drought and high feed costs (which make it more cost effective to raise fewer but fatter cattle), despite a fall in feed costs exceeding 20%, slaughter weights are expected to remain stable this year.
However, beef production in 2014 is estimated marginally higher than in 2013, with a higher slaughter rate counteracting the impact of flat cattle numbers.
Currency, inventories makes trade position deteriorate
But while domestic demand and consumption is remaining relatively stable, the last decade has done great damage to Canadian beef cattle's international trade position. Although beef cattle numbers have stabilized in recent years, from 2003 to 2010, the industry was squeezed between rising feed costs, multiplied by a Canadian dollar which rose 60% against the US dollar.
The currency's rapid, sharp appreciation Canadian beef very uncompetitive overseas, especially in fast growing East Asian markets. This was especially true after the late 2000s, when countries such as Japan and South Korea unbanned US beef, and Canadian beef suddenly found itself at a large cost disadvantage.
With Canadian cattle inventories falling 25% from 5.44 million head in 2005 to 4.11 million 2010 and domestic demand staying roughly constant, at first exports wilted. They plunged 46% over the last eight years, from 596,000 tonnes in 2005 to 320,000 tonnes this year.
In the process, Canada, formerly the world's third largest beef exporter, has seen itself fall behind India, America, Brazil, Australia, New Zealand and Uruguay to the number seven position. Going forward, with Canadian domestic demand remaining relatively stable, Canadian beef exports can only recover when its cattle herd numbers do, and no turnaround is in sight for at least a year.
Moreover, like its US neighbor, Canada is losing not just its capacity to export but also to supply itself beef. In 2014, the USDA expects 315,000 tonnes of exports outbalanced by 320,000 tonnes of imports –the latter up 112% from a mere 115,000 tonnes in 2005.
And there are both similarities and differences to America's beef trade performance. On one hand, much like the US, Canada is a big eater of relatively cheap burgers, mostly exporting expensive cuts like steak while its fast food chains and food processors find themselves short of ground beef to meet domestic demand. So Canada, like the US, finds that its cattle herd has fallen too low to supply all the low-end cuts it needs, thereby boosting import volumes.
But there are also two important differences. First, whereas Canadian beef exports have fallen off a cliff, six of the last eight years saw US beef exports nearly double in volume, before tapering off under the weight of high feed costs since 2012.
Diversification, structural adjustment needed
Second, whereas US beef imports and exports are diversified, the same cannot be said for Canada. In the early 2000s, 70% to 80% of Canadian beef and pork exports were shipped to the US. As of 2013, only 31% of Canada's pork exports go to the US, but the American market still absorbs 77% of its beef exports. By comparison, only about 10% of US beef exports go to Canada
To be fair to Canada, this situation is the outcome of free trade and market imbalances: Under NAFTA, beef flows with very few restrictions between Canada and the United States. But with Canada having 33 million people and the US 315 million, Canadian beef has ten times as many opportunities to export to the United States than vice-versa. 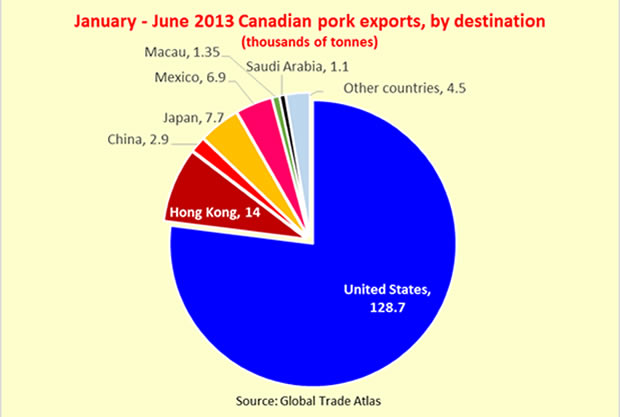 But whereas US beef exports to East Asia have been growing strongly, Canada's have not increased by anywhere near as much. Only China, which recently signed a trade liberalization pact with Canada, saw exports rise from zero in 2011 to a (still inconsequential) 2,986 tonnes in 2013. In Japan where a nuclear accident caused beef imports to more than double, Canadian beef exports increased by 3,000 tonnes in two years whereas US beef export increased by more than 10 times this amount over the same time.
Going forward, with Brazil's currency dropping 15% against the Canadian dollar this year, it is difficult to see Canadian beef making export market inroads in the near future.
One thing is for certain: Canada's beef sector appears to be caught in a chicken-and-egg situation: Exports cannot increase until cattle numbers rise. Moreover, until more beef processing capacity opens, a fair amount of the cattle will be shipped to the United States for finishing or slaughter. At this point, unfinished cattle exports look more likely to rise than exports of processed beef.
With such structural impediments in its way, Canada's beef cattle sector has to restructure itself so that more of its value-added processing remains in Canada, and re-market itself in a way that overcomes the higher production cost base it has faced since the late 2000s.
As Canada's swine sector faced the same huge rise in the Canadian dollar's value and feed costs issues as its beef cattle. Despite these challenges, pork exports increased 15% after 2005 and found new markets in East Asia. Perhaps Canada's cattle producers need to examine the production and marketing model of their nation's swine sector.