September 11, 2019
Booming Thai chicken exports to exceed a million tonnes in 2020
Rising productivity, expanding profits, new Asian buyers offset stagnant traditional importers and slower consumption growth. Exported as much in H1 2019 as it did in all of 2014.
By Eric J. Brooks
An eFeedLink Hot Topic

With decelerating consumption growth more than offset by new foreign buyers and improved broiler farming returns, the news keeps getting better for Thailand's broiler trade. Output expanded by over 6% in both 2017 and 2018, totaling 2.99 and 3.17 million tonnes respectively.
Based on USDA estimates, the four years since 2015 have seen average yearly increases in production (+5.2%), exports (+11.2%) and domestic chicken consumption (+3.6%) well above their long-term trend rates.
Nor is there any let-up in the industry's momentum: Chicken meat output is expected to expand a USDA estimated 4.1% to 3.3 million tonnes this year and a faster 5.9% to 3.49 million tonnes in 2020.
Alongside strong export growth, thin profits or marginal losses that until recently held back its domestic market have moved solidly into the black. Last year chicken prices rose from their January low of THB28/kg (US$0.92/kg) to THB32/kg (US$1.05/kg) in July. This year they rose from THB29.5/kg (US$0.97/kg) in January to peak at THB35/kg (US$1.15/kg) in July.
9% higher July broiler prices were complimented by a 6% reduction in production costs, from THB34/kg (US$1.11/kg) in January to THB32/kg (US$1.04/kg) by July of this year.
On one hand, 2018 saw low retail chicken meat prices and rising personal incomes fuel 5.3% consumption growth to 2.345 million tonnes. With high red meat costs driving prices up nearly 10% on-year, 2019 will see slower consumption growth decelerate to 1.9% and 2.39 million tonnes, followed by a 2.5% increase to 2.45 million tonnes in 2020.
On the other hand, incremental expansion of European and Japanese demand for Thai chicken has coincided with trade liberalization and aggressive entry into new markets including China, South Korea and Southeast Asia. Trade-wise, this has made the 2010s a success to the same degree the 2000s were a failure.
At that time, 13% annual export growth in the early 2000s was followed by 2003's disastrous bird flu outbreak, which resulted in frozen chicken being banned from the EU, Japan and other important world markets. Thailand spent the rest of that decade replacing lost frozen chicken exports with higher value shipments of cooked chicken in the form of ready-to-eat meals.
After 2012, frozen Thai chicken was allowed back into the EU, Japan, Hong Kong, South Africa, Bahrain, Russia, the UAE and Qatar. That triggered on average 11.2% annual increases in export shipments for the four years ending in 2015. At that time it was thought growth would taper off when exports re-gained their old shares of the EU and Japanese markets –but it never did.
In 2019 and for all of 2020, China's African Swine Fever epidemic has boosted meat prices and demand for internationally traded chicken meat, Thailand's included. In Thailand's own neighborhood, ASEAN wide tariff reductions have boosted exports to non-traditional markets such as Cambodia and Myanmar. These new markets are the difference between stagnation and the export boom Thai chicken producers are currently riding.
On one hand, with Japan ramping up domestic poultry output, H1 exports to that country fell 2%, from 235,231 tonnes in H1 2018 to 230,863 this year. –Even so, an 11,850-tonne increase in cooked chicken shipments came close to completely offsetting a 16,218-tonne fall in frozen chicken exports to Japan.
A slight 4,368-tonne decline in Japan-destined shipments was offset by an 8.3%, 10,274 -tonne rise in H1 2019 exports to the EU, which climbed to 136,549 tonnes, from 126,275 tonnes in H1 2018. With EU buyers stocking up inventories in anticipation of Britain's exit from the EU, this year's exports to Europe may exceed its tariff-free quota.
--Even so, in a year when overall chicken exports are rising 13.8%, total H1 shipments to the EU and Japan are only 5,900 tonnes or 1.6%, totalling a collective 368,000 tonnes As a result, Europe and Japan have gone from absorbing close to 85% of Thai exports at the start of the 2010s to around 70% this year.
In early 2017 mass exports of frozen chicken began to enter South Korea's market for the first time since 2003's bird flu epidemic. Similarly, starting in late 2017, China gradually began approving a growing number of Thai chicken processing plants for export.
By mid-2019, Beijing was allowing Thai chicken to be imported from seven out of 19 audited chicken processing plants, with exports higher than expected due China's worsening ASF epidemic. Consequently, from a mere 4,662 tonnes in the first six months of 2018, H1 2019 exports to China skyrocketed 802%, totaling 42,073 tonnes.
Similarly, at 25,000 tonnes, H1 2019 exports to South Korea are running 57% higher than the 15,300 tonnes exported in the first half of last year. As frontier markets, both China and South Korea should see Thai chicken export volumes multiply several times above current levels before slower, more incremental growth becomes the norm.
Due to such unusually strong growth from new, non-traditional markets. Thailand exported 508,606 tonnes of meat in the first six months of 2019 – almost matching the 546,000 tonnes it shipped in all of 2014. The USDA has been forced to revise its 2019 chicken meat export for Thailand twice; first from 900,000 to 935,000 tonnes and more recently, 950,000 tonnes.
In 2020, the USDA expects export growth to taper off to 7.4% –but that will still make Thailand's chicken meat exports total 1.02 million tonnes that year –making it the only nation other than America or Brazil to ever export over a million tonnes of chicken. 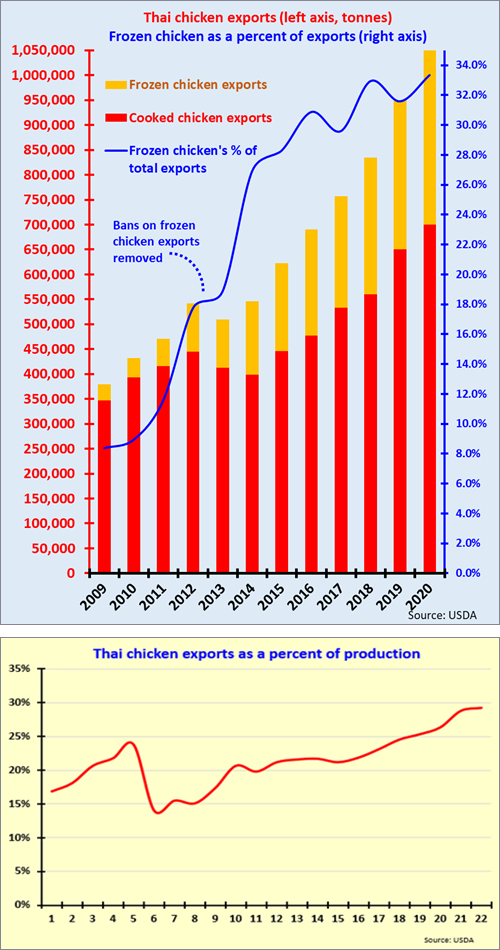 Interestingly, even seven years after large importers removed restrictions on Thailand's frozen chicken exports, cooked chicken continues to account for a majority of its exports. Ten years ago before frozen chicken was allowed back into major foreign markets, cooked chicken accounted for 91% of exports and frozen chicken 9% in 2010.
By 2016, cooked chicken's share fell to 70% and frozen chicken's to 30% --but frozen chicken's share has merely fluctuated in the 30% to 33% range ever since. This is because while Thailand got around an eight-year export ban on frozen broiler meat by selling cooked chicken, the latter has turned into an important source of competitive advantage.
A net feed crop importer that protects domestic corn farmers, Thailand is not a low-cost chicken producer. Wages have also risen by more than those of rival exporters over the past fifteen years. Cost pressure is further intensified by the baht rising 10% over the past five years. On the other hand, cooked chicken's value-processing allows it to fetch a significantly higher unit price than its mostly frozen competition.
Thailand's ability to supply cooked chicken at a competitive price has been further augmented by constant productivity increases: Since 2004, broiler maturity time has fallen 16%, from 49 to 41 days. Over these same fifteen years, broiler weights increased 19.5%, from 2.05 to 2.45kg, but feed conversion efficiency improved 15.4%, with average FCRs falling from 1.95 to 1.65.
These allow Thailand to leverage lower transport costs within East Asia, business alliances with large Japanese conglomerates and high chicken processing productivity into a source of strong competitive advantage –but more for its processed chicken lines than its commodity frozen chicken meat. Hence, while China will probably stimulate demand for raw frozen broiler meat, over the longer term, its greatest competitive advantage will remain in cooked chicken exports.
This bright export forecast is complimented by the semi-mature but still dynamic state of Thailand's domestic market. Based on USDA consumption figures, consumption and per capita consumption have risen at 2.9% and 2.7% annual rates since the turn of the century. In particular, per capita chicken consumption has risen from 21kg in 2000 to 34kg in 2018 and will be 35kg in 2020.
While this is a relatively high level of chicken consumption, with Thai per capita GDP at slightly below US$8,000 (US$18,000 at PPP), there are years of pent-up income growth and at least a decade of strong meat consumption growth left. Hence, we expect the average amount of chicken eaten by every Thai to keep rising around 2.5% annually, totaling approximately 45kg by 2030.
In conclusion, Thai poultry producers will continue to ride out short-term market booms and busts, with the next year looking particularly prosperous, especially for trade-related revenues. Over the longer-term, this nation is blessed with unparalleled expertise in cooked chicken processing, new fast-growing export frontier markets in both North and Southeast Asia, alongside at least a decade of strong domestic demand growth.
Unless some unforeseen event hinders it, Thailand's export-oriented broiler sector has never looked so domestically, internationally and technically competitive.