It is well documented that the weaning period is related to environmental and social changes which negatively impact the physiology, microbiology and immunology of piglets. Under commercial conditions the use of high doses of ZnO (2100 to 3100 mg/kg) in post-weaning diets has proven to be effective in improving animal performance and reducing piglet diarrhea. More recently, such use has been subjected to general discussion, not just in Europe, due to its environmental impact on soil and water and possible relationship to the development of antimicrobial resistance. Now, there is also evidence that high levels of ZnO in diets may regulate gene expression concerning the modifying of piglet immune response.
Traditional alternatives to an effective ZnO replacement are normally associated with a combination of feed additives, such as probiotics, prebiotics, eubiotics, acidifiers, enzymes and plant extracts. However, in most cases, nutritionists have to adopt a holistic approach which includes diets with lower crude protein levels, prioritizing the inclusion of ingredients with high palatability, digestibility, and functional proprieties, aiming not only to promote a faster gut maturation but also needing to control fermentation in the large intestine in the first two to four weeks after weaning.
To address the growing protein challenge for the swine industry, Phileo by Lesaffre invested in the research and development of a purified yeast extract, Prosaf®, which has unique characteristics when compared to the majority of yeast products available on the market. Prosaf® is a primary culture of a selected proprietary baker's yeast strain, produced under a standardized hydrolysis, solubilization and purification process. Its distinguished characteristics include a minimum of 63% protein content, high amino acids digestibility (table 1) and high levels of nucleic and glutamic acids – 7.7% and 10.9% respectively.
Prosaf® distinguished composition of a premium Yeast Extract.
1.   Amino acids digestibility and peptide profile
When formulating diets with a low inclusion level of ZnO, special attention must be given to the adoption of proteins with high amino acid digestibility. As amino acids are digested only in the small intestine, with no absorption occurring in the large intestine, the microflora consequently metabolizes some of the undigested amino acids for their own growth and development. The ileal undigested protein can be used as a substrate for bacterial fermentation by E. coli, for example, or other pathogens. High non-digested protein has a high correlation with post-weaning diarrhea which impacts negatively on growth and performance. Understanding the amino acids standard ileal digestible (SID) profile of major protein sources is not only an important reference for the efficiency of amino acids digestion, but is also a major indicator of the potential gut health of post-weaning piglets.
Prosaf® high amino acid digestibility (Table 1) can partially be explained by its peptide composition. Amino acids can be transported across the brushborder membrane of intestinal epithelial cells, either in their free form or in the form of di- and tripeptides.
Table 1.  Prosaf® standard Ileal digestibility (SID) from piglets of 7.9kgs (5 days post-weaning). 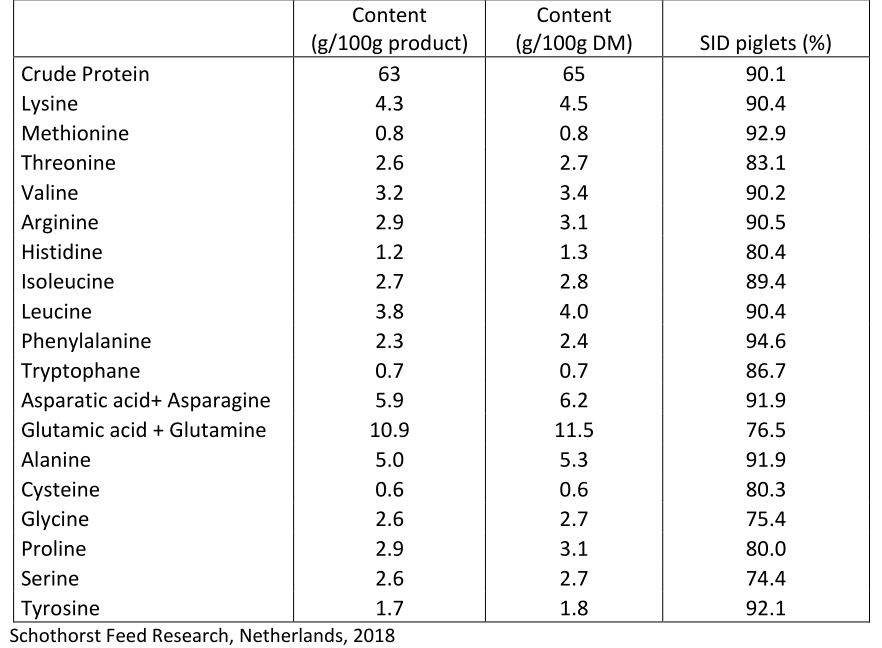 Several authors have demonstrated that the absorption of bi- and tripeptides have a faster route of uptake per unit of time than their constituent amino acids. Prosaf® has predominantly small size peptides composition: 88% of the product is classified under 3.6 kDa, and 38% below 1.0 kDa, which facilitates the amino acid uptake and absorption at the enterocyte level (Figure 1).
Figure 1.  Peptide size distribution of Prosaf® showing a large proportion of small size peptides.

2.   Prosaf® as a source of glutamic acid and nucleic acid
The high glutamic acid content of Prosaf® (10.9%) can beneficially impact on palatability, gut development and, consequently, performance. Of the 20 free amino acids in sow milk, glutamic acid is the most abundant, accounting for more than 50% of the total free amino acid content. High levels of glutamic acid help to influence taste acceptability in post-weaning diets. Glutamine is also a key nutrient for the intestine as around 30% of total glutamine absorbed is utilized by the intestine itself. High levels of glutamine are related to enterocyte proliferation and the regulation of tight junction proteins. Glutamine is also correlated with the reduction of pro-inflammatory signals which are involved to protect cells against apoptosis and cellular stresses during normal and pathologic conditions.
Another important constituent of Prosaf® is its high content of nucleic acid. Several studies using animal models have suggested that dietary nucleotides may affect the gastrointestinal tract by modulating the intestinal microbiota, and by activating immune-enhancing cells. Although nucleotides are synthesized endogenously, it has been suggested that dietary supplementation with a source of nucleotides may exert beneficial effects on small intestinal growth and development, lipid metabolism and hepatic function. Prosaf® distinguished 7.7% nucleic acid composition positively influences the young piglet post-weaning start and immunity.
Prosaf® insures a better post-weaning start.
To validate and prove scientifically the efficacy and potential of Prosaf®supplementation in swine post-weaning diets, several trials were implemented with the priority of determining inclusion rates per phase, alongside combinations of Prosaf®with others functional proteins, and the benefits of the product under low or high farm challenges.
Generally speaking, the best performance with Prosaf® was achieved with 2% inclusion in the first pre-starter diet (normally used during the one week before and first two weeks after weaning) moving to 1% inclusion on the second diet – covering the two weeks after the end of the first diet. Phileo by Lesaffre research has concluded that the full benefit of Prosaf® is achieved when piglets are able to consume between 160g and 200g of product during the first 28 days of post-weaning.
The following trial results demonstrate the ability of Prosaf® to improve piglet performance and health while also showing, above all, a good return on investment.
In the first trial, 192 pigs were assigned at weaning (Day 0 at approximately 23 days of age) according to one of four different treatments: T1: control diet; T2: Prosaf® 1% and 0.5%; T3: Prosaf® 2% and 1%; T4: Prosaf®4% and 2%. All treated groups had Prosaf® included in their diet for the first 28 days post-weaning. The trial was carried out to the end of the nursery phase when the animals were 65 days old. Therefore, from day 52 to 65 of age, all animals were treated with the same diet. During the entire trial, animals consumed mashed feed and all diets were iso-caloric and iso-nutrient. Trial results show that animals from T3 ( inclusion of 2% in first diet and 1% in second diet) had a better average daily gain (+ 12%), feed conversion ratio (- 4%) and final body weight (+ 7% or extra 1.58 kg at the end of nursery) as presented in figures 2, 3 and 4. This result guaranteed a return on Investment (ROI) of 1:3.5 for the Prosaf® group under the T3 inclusion rate.
Figure 2.  Inclusion of 2% Prosaf® in pre-starter followed by 1% Prosaf® in the second diet resulted in the highest performance.

Figure 3.  Next to higher growth rates, FCR was also best with the same strategy.

Figure 4.  As a consequence of the better performance, T3 group performed best, resulting in a ROI of 1:3.5.

The better performance was achieved as a consequence of a great start for pigs treated with Prosaf® in relation to the control group. From the beginning of the trial, the Prosaf® animals had higher feed intake (+ 10% in the first 14 days after weaning) and faster average daily gain (+ 36%). This suggests that the functional proprieties of Prosaf® are helping not only to provide a more palatable diet but also stimulating faster gut development, resulting in a more efficient post-weaning gut.
Another field trial was carried out on a farm under high health challenge. The animals were supplemented with Prosaf® (2% or 4%) for 15 days post-weaning. Prosaf® supplementation decreased the number of culled pigs after weaning by 60%. The improved animal resistance can be explained by the impact of Prosaf® in relation to better gut health and animal wellbeing (figure 5).
Figure 5.  Inclusion of Prosaf® reduces the number of culled pigs after weaning.

Conclusion
When formulating diets with low inclusion levels of ZnO, special attention must be given to diet protein levels, prioritizing the inclusion of ingredients with high palatability, digestibility, and functional proprieties; aiming to control not only the fermentation in the large intestine but also promoting fast gut maturation during the first few weeks after weaning.
Prosaf® has, in its composition, the right combination of bioactive ingredients as exist in high levels of glutamic and nucleic acids, which are associated with high digestibility and palatability. When considering the new scenario of diets which include low levels of ZnO, Prosaf® has a positive impact in increasing piglet post-weaning feed intake and the speeding up of gut development. Due to its high digestibility, it also reduces the supply of undigested protein into the large intestine, a supply which, when not reduced, can potentially cause piglet diarrhea, consequently leading to lower animal growth and performance.

Article made possible through the contribution of Fabio Catunda and Phileo

Video >
Technical Paper >
The importance of using the correct phytase at optimal dose
Phytate is a six-fold dihydrogen phosphate ester of inositol, specifically myo-inositol 1,2,3,4,5,6 -hexakiphosphate. Also known as phytic acid, it is considered the main storage f ...
Feed Enzyme Technology: Present Status and Future Developments
Exogenous enzymes are now well accepted as a class of feed additives in diet formulations for poultry and pigs to overcome the negative effects of anti-nutritional factors, and to ...
New enzyme application strategies to maximize feed cost savings, mitigate phosphorus excretion, and reduce carbon emissions
In recent years we are seeing a growing consumer interest in how food is produced, which is influencing the behaviour of the agri-food industry and the manufacture of feed. Althoug ...