With rapid export growth picking up the slack for stagnant personal incomes, Turkey's once vibrant broiler sector is enjoying 5% output growth this year and is projected for a USDA estimated 4.6% expansion in 2018.  With the winding down of Iraq's civil war and the ISIS terror threat in neighboring countries, exports are again growing strongly.
Hence, after three horrendous years of impeded trade and sporadic bird flu outbreaks, broiler meat exports grew by 35.9% in 2017, from 263,000 tonnes (their lowest volume since 2011) to 357,000 tonnes. They then kept rising; by 23% in 2018 to 439,000 tonnes, a USDA estimated 13.9% in 2019 to 500,000 tonnes, with a 10.8% export growth to 554,000 tonnes projected for 2020.
While 2019's 5% production growth is not as fast as 2017's 13.7% expansion, it represents a recovery from shock produced by the Turkish lira's 60% devaluation from early 2017 through 2019. It badly impacted domestic consumption and limited 2018's output growth to 1.7%. The problem is that the Turkish currency's radical devaluation impacted more than just domestic consumption.
Rival exporters Brazil and Argentina suffered similar currency crashes but are fortunate enough to be self-sufficient in feed inputs. Turkey, by comparison, imports most of its corn and soybeans, which skyrocketed in cost by the same amount the lira fell.
The situation was made worse by Turkish laws against importing GMO soybeans. They force Turkey to buy Brazilian soybeans, which had been made more expensive by China's 25% import tax on US beans. It also made the cost of electricity (which is made from imported fossil fuel), hatching eggs and day old chicks (which are imported from Britain, the US and Canada) rise in tandem with feed costs. All this made the resulting broiler cost-push inflation even worse.
On one hand, all this did not impact exports, as higher production costs were offset by the lira's correspondingly lower value. On the other hand, domestic consumers were badly impacted by this import-driven increase in production costs and live broiler prices: While its export price fell in foreign markets, in Turkey itself chicken meat cost 73% more in July 2019 than it did during the same month in 2017.
Due to such chicken price hyperinflation, consumption went from expanding by more than 10% for the first time since 2010 during 2017 to falling 2.5% in 2018. With a 2.5% consumption fall offset by 23% export growth, 2018 saw output inch up 1.7% to 2.225 million tonnes.  Even so, the years since 2016 have seen the fastest growth since 2012, after which a faltering domestic economy, political violence in bordering nations and bird flu took their toll. While many problems remain, foreign demand is propping up an industry that once had enjoyed comparably strong domestic and export-driven growth.
On one hand, at 439,000 tonnes, 2018 exports came in well ahead of the initial USDA forecasted 387,000 tonnes and up a strong 23.0% on 2017's 357,000 tonnes. Much of this is due to Saudi Arabia, which temporarily banned Brazilian chicken shortly after it signed a sanitary protocol for the export of chicken meat with Turkey. Saudi Arabia's resulting shortfall of Brazilian chicken imports opened up a lucrative export niche for its Turkish poultry meat. Here, however, it faces strong competition from chicken supplied by Brazil and increasingly from Thailand too.
On the other hand, Turkish chicken meat is banned from the EU, as it has been deemed to not conform to the latter's food safety standard. It also cannot compete in Japan's large market against Thai chicken's lower transport cost or Brazilian chicken's feed cost advantage.
In the rest of Asia, Turkey mostly exports sizable amounts of chicken feet to Vietnam and Hong Kong, with the latter smuggling some into China. These, however, provide relatively low revenues per unit compared to higher value chicken parts. It however, does not have a chicken trade liberalization agreement with China, which will import over half a million tonnes of poultry meat this year and 600,000 tonnes next year.
Despite these barriers and challenges, export strong momentum will ride strong Middle Eastern demand into this year, with 2019 shipments projected to rise another 13.9% to 500,000 tonnes  --much higher than the 418,000 tonnes the USDA forecasted just a year ago. 2020 will be an even better year, with the USDA projecting 10.8% export growth, to 554,000 tonnes.
This makes for an impressive trade performance: From almost no exports twenty years ago, Turkey has grown into the world's fourth-largest broiler meat supplier with only Brazil, America and Thailand exporting more. The last two year have seen it overtake both China and Argentina in export volumes.
Unfortunately, such positive statistics veil a highly troubled recent past and difficult circumstances. Even though ISIS-linked terrorists no longer threaten overland shipments, 50% of export volumes still go to Iraq, which has banned Turkish chicken meat, imposed import taxes and repealed them since 2014.
As recently as July 2018, Iraq placed import duties of up to 50% on some Turkish broiler meat parts –but Turkey was fortunate enough for its currency to fall by a comparably steep amount. Hence, it did not impact export volumes to Iraq, which grew 10% to 248,000 tonnes. Unfortunately, it did force exporters to cut their chicken meat export prices to Iraq. That caused revenues from exports to Iraq to stay flat at US$331 million --the same amount as in 2017-- despite exporting 10% more chicken by volume,
For now, export demand has revived: After growing from almost nothing in 1998 at a 30.2% annual rate into 2014, terrorists and bandits on overland roads to Syria and Iraq and protectionist moves on the part of the latter caused them to fall at a -5.6% annual rate from 2013 through 2016. For the last three years however, exports have rebounded, growing at an average 20.5% annual rate. 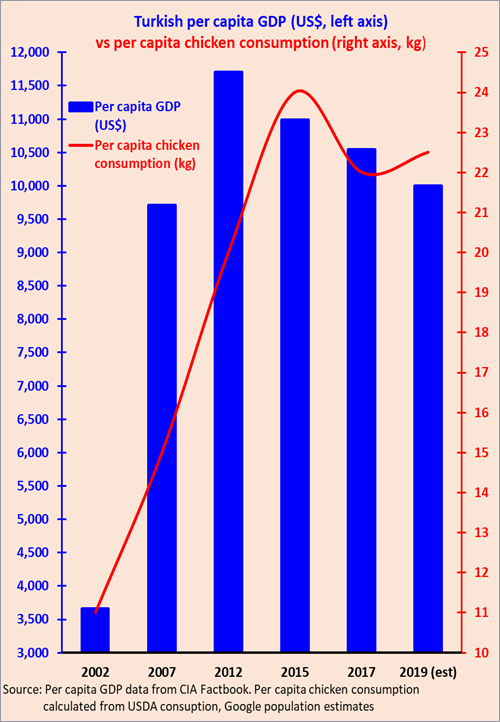 Of course, no one expects exports to continue growing at a 20% rate indefinitely. Current trade arrangements could at most sustain half this long-term export growth rate. Even so, Turkish policymakers are opening up negotiations with their counterparts in China, Russia and the EU in hope of opening up new, large untapped export markets.
While exports have rebounded, domestic consumption growth has not. This is due to two severe recessions, one political crisis and a steep currency devaluation endured by Turkey over the last five years.
For 2019, consumption will partly recover, back to 1.89 million tonnes –Even so, after rising at 6.8% annual rate in the twenty years since 1998, by the end of 2020, consumption will have stagnated in the 1.75 to 1.9 million tonne range for four consecutive years. Per capita consumption enjoyed a meteoric rise from 10kg in 2000 to 25kg in 2015 before slumping back to 22kg at the present time.
Export growth has resumed but neither income growth nor chicken consumption have. From the late 1990s through early 2010s, a 220% rise in Turkish per capita incomes (in US$ terms) led to a 118% increase in per capita chicken consumption.
Over the roughly two decades that chicken consumption jumped from 10kg to 25kg, incomes jumped from roughly US$3,000/year in the late 1990s to US$11,700/year by 2011.  Thereafter per capita incomes stagnated: They fell back towards US$10,000/year and per capita chicken consumption stopped growing too.
Hence, at this time, Turkish poultry's real challenge is to make consumption growth resume. As the attached graph shows, the industry growth rate decelerated in the drive towards maturity, but not by much –until recessions, a political crisis and trade woes simultaneously pummeled the sector in the mid-2010s.
The good news is that despite rising by over 70% in less than two years, chicken remains by far Turkey's most popular meat. On one hand, the currency devaluation caused chicken demand to fall as prices skyrocketed. On the other hand, the lira's decline boosted the price of beef and mutton by even more, so there was no substituting of other meats in place of chicken.
Assuming Iraq does not revert to undertaking permanent protectionist trade barriers and the security situation in the area between Turkey, Iraq and Syria remains stable, there is no reason why imports to these nations will not continue growing by an average of 5% or more for the next decade. Should Turkish poultry manage to negotiate access to large EU, Russian or Chinese markets, exports can continue growing by 10% to 20% annually for five to ten years. If not, in the absence of new Middle Eastern political problems, annual export growth of 5% to 10% can be sustained well into the late 2020s.
The good news is that based on the relationship between incomes and meat consumption in other Islamic countries, Turkish per capita chicken consumption can resume growing quickly until it more than doubles, into the 45kg to 50kg range. The bad news is that while Turkey can grow its broiler sector via trade liberalization, it will take a resumption of sustained economic growth, political and currency stability before the industry's larger domestic sector can grow at a pace comparable to its external poultry meat trade.