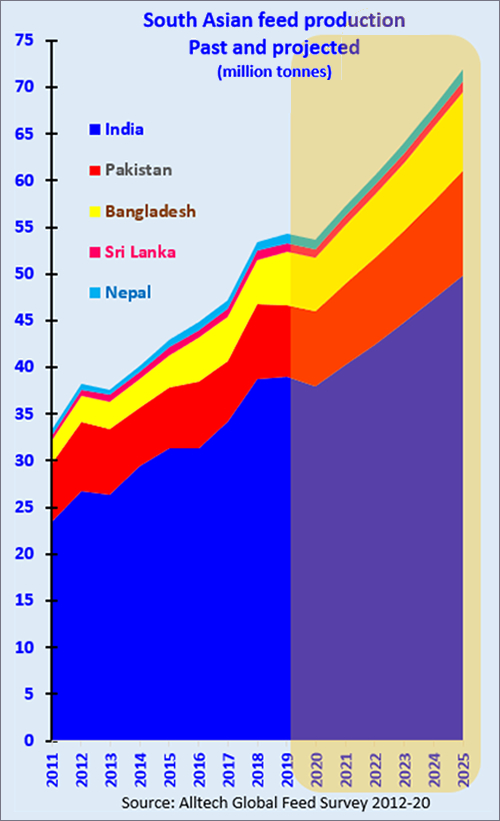 Despite having a 40% lacto-ovo vegetarian population, India's 1.4 billion people account for 77% of South Asia's population, 70% of its meat consumption, 72.5% or 4.35 million tonnes of this region's 6 million tonne poultry meat output and 80% of its 250 million liters milk output.
With per capita meat consumption of approximately 6kg (over half of which is accounted by chicken), 2018 Indian per capita meat consumption is almost double what it was in 2000, with fluid milk and egg consumption more than doubling over this same time.
To satisfy fast-rising protein consumption, Indian feed output grew from barely 10 million tonnes in 2000 to 22 million tonnes in 2010 and an Alltech Global Feed Survey estimated 39 million tonnes in 2019.  On the other hand, this is only 55% of Brazil's feed output  – a nation that has 1.1 billion fewer people. On the other hand, India's vast population and agribusiness immaturity are precisely why feed output can continue growing at close to the 6.6% annual rate it did from 2011 through 2019 for decades to come.
Besides being South Asia's dominant feed producer, India is one of the most geographically diverse and difficult to understand agribusiness landscapes. This is because India contains several large but very different agribusiness markets – each one containing more people than many leading agribusiness nations.
India's one billion Hindus freely consume eggs and dairy products but according to Census India, 56% are lacto-ovo vegetarians and do not eat any meat at all. The remaining 440 million non-vegetarian Hindus mostly eat seafood or chicken. Except for religiously prohibited beef, ruminant meats are consumed but at lower levels than in other religious groups.
Consumption of chicken, dairy products and seafood for protein is especially predominant in India's southern coastal regions. This makes the protein consumption habits of India's one billion Hindu majority resemble those of Indonesia, where protein is mostly sourced from poultry or seafood.
On the other hand, India's approximately 210 million Muslims and 30 million Christians account for almost all its beef consumption. They are 17% of India's population but account for a third of its chicken consumption too. With most of India's Muslims located in its northern states, this creates huge geographic variations in Indian protein consumption – and the type of feed required.
Instead of uniform 3.3kg per capita chicken consumption, over 6kg is consumed in northern states with large Muslim populations but among Hindus, consumption is still near 2.5kg per capita.
Per capita beef consumption is barely 2kg but over half of Indians eat none at all.  On the other hand, among India's 240 million population of Muslims and Christians, per capita beef consumption exceeds 11kg – more beef than Muslim majority Pakistanis consume.
With red meat friendly demographics mostly located in northern India and cattle slaughter banned in many other states, the feed industry implications are strong. First, while they might only be only 240 million of India's 1.4 billion people, the total number of beef-eating Indians is higher than the populations of Muslim majority, beef friendly Pakistan and Bangladesh.
Second, with many Muslims living near India's north-eastern and north-western borders, red meat eating regions are agribusiness extensions of similar religious and red meat eating demographics in neighbouring Pakistan, Bangladesh, and Afghanistan. In 2019, India accounted for 65% or 4.3 million of South Asia's 6.6 million tonne beef production but only 2.81 million tonnes of its beef consumption.
Hence, to understand Indian agribusiness, you need to see it as several vast feed sectors within one country: The export-driven beef cattle sector that serves India's Muslin and Christian populations harvests beef from mature, aging dairy cattle, buffalo cows and bulls whose slaughter is legally allowed. As many of these animals rely on forage or feed suitable for dairy cows, India may be a top exporter of beef but this sector has almost no impact on its feed production.
Poultry dominates feed production, with broilers (12.49 mt) and layers (12.40mt) contributing nearly equal shares to its 64% proportion. Dairy cattle and buffalo account for 30% of feed production. Export driven shrimp and tilapia farms account for another 5.9% of output, with the remaining 0.2% going to ruminant species such as goats or sheep (which mostly rely on foraging).
With poultry, dairy and aquaculture continuing to lead growth, neither their contribution to feed output or the industry's forecasted longterm 5.5% to 6.0% annual expansion is expected to change much.