Gastrointestinal disturbances immediately post weaning can cause heavy economic loss in the pig industry. The weaning transition is a complex period during which the piglets have to cope with abrupt separation from their mothers and adapt to new environment where they are mixed with other litters. In addition, their diet will be switched from highlydigestible (liquid) milk to a less digestible and more-complex solid feed during this transition. Weaned at an early age (21 to 35 d) in intensive production systems has probably exacerbated the level of general stress in these immature animals [1].

In the past decade, various nutritional methods or solutions to minimize the weaning losses have been tested, some of which have been widely implemented in practice. Probiotics, which is a modulator to increase many active behaviors, plays an important role in gut-brain axis regulation [2]. Many references demonstrate different probiotics capacities can enhance productivity in weaning piglets and increase gain:feed (G:F) ratio [3], average daily gain (ADG) [4] and nutrient digestibility [5]. Direct action of the probiotics can achieve a higher bioavailability of feed nutrients, indirect gut health modulation (relieving weaning stress, preventing diarrhea, improving the intestinal microbiota profile, etc.) or perhaps a combination of both may be involved [6]. Liquid feed diets have been widely used in western and southern Europe for 20 years, especially in France and Italy [7]. There has been an increase in the use of fermented liquid and liquid feed in the European Union (EU) since the ban on the use of antibiotics as growth promoters in pig feed [8]. Piglets grew faster on the liquid diet due to a higher feed intake (FI), a better transition from milk feeding and lower risk of dehydration [9]. With the advancement of additives and feeding technology, probiotics and liquid feeding would be used in most swine farms. However, what nutritionists always focus on is the formulation designs. Various nutrition levels and the liquid feed program might influence the effects of additives in pigs. Therefore, we hypothesized there might be an interaction among nutrition levels, the liquid feeding program and probiotics. However, no research has been carried out to determine the interaction among probiotics, the liquid feeding program and nutrition designs. Consequently, the objective of the study is to determine effects of dietary probiotic blend and liquid feed program at different nutritional densities on growth performance, nutrient digestibility, fecal score in weaning piglets.

The protocols used for the current experiment were approved by the Animal Care and Use Committee of Dankook University, Korea.

Chromic oxide (Cr2O3) was added to each diet at 0.2% as an indigestible marker to evaluate the nutrient digestibility on d 5, d 15, and d 25. Pigs were housed in an environmentally controlled nursery facility with slatted plastic flooring and a mechanical ventilation system. The temperature of the room was maintained at approximately 30°C for the first week of the experiment, after which it was reduced by 1°C per week over the next 4 weeks. Each pen (1.8 × 1.0 m) was equipped with a self-feeder and a nipple waterer to allow ad libitum access to feed and water throughout the experimental period.

The individual pig BW and feed consumption from each pen was monitored to calculate the ADG, average daily feed intake (ADFI) and G:F ratio on 0, d 5, d 15, and d 25. Fecal samples were collected from two pigs in each pen (1 gilt and 1 barrow) on the d 5, d 15, and d 25 of the experiment to determine the apparent total tract digestibility of dry matter (DM), N, and energy.

Feed samples were dried at 70°C for 72 h, after which they were ground to pass through a 1-mm screen. The DM and N concentrations were determined according to the AOAC [11]. Representative samples of each ingredient were hydrolyzed for 23 h at 110 1°C with or without performic acid oxidation for Cys and Met, and other AA, respectively, and AA was separated by ion exchange chromatography and quantified by photometric detection after ninhydrin reaction European Commission [12].

The fecal score was determined by the average value of five pigs of each pen by using a 5-grade score system [13]. The standard of this system is as following: 1 = hard, dry pellets in a small, hard mass; 2 = hard, formed stool that remains firm and soft; 3 = soft, formed and moist stool that retains its shape; 4 = soft, unformed stool that assumes the shape of the container; 5 = watery, liquid stool that can be poured. Scores were recorded on a pen basis following observations of individual pigs and signs of stool consistency in the pen.

Data were analyzed as a completely randomized block design, with a 2×2×2 factorial arrangement, using general linear model procedure [14]. Variability in the data was expressed as the pooled standard error of mean, and p<0.05 was considered statistically significant, whereas p<0.10 was considered a tendency.

The results of growth performance and nutrient digestibility of DM, energy and nitrogen are presented in Table 2, 3, respectively. In the phase 2, ADG and ADFI were greater p< 0.05) in probiotics treatments comparing to the non-probiotics treatments. In the phase 3, probiotics, wet feed and high nutrition diet significantly improved G:F (p<0.05). Besides, those pigs fed high nutrition diet appeared to have greater ADG and G:F than that fed low nutrition diet (p<0.05). Moreover, the interactive influence on G:F appeared not only between nutrition levels and feed types but also between nutrition levels and probiotics (p<0.05). Interestingly, there was a significant probiotics × feed type × nutrition density interaction on G:F (p<0.05). Piglets fed the diet containing probiotics had increased ADG, ADFI, and G:F comparing to that receiving the diet without probiotics (p<0.05). Besides, high nutrition diet significantly raised ADG and ADFI (p<0.05). No interactive response was found through the entire experiments (p>0.05). There was no difference in nutrient digestibility of DM, energy and nitrogen as well (p>0.05).

The results of fecal score are appeared in Table 4. An obvious reduction on fecal score was observed in probiotics treatment from d 0 to d 5 (p<0.05). There was an interactive effect on fecal score between feed types and nutrition concentrations from d 5 to d 25 (p<0.05).

The results of this study showed that dietary probiotics blend can increase the ADG, ADFI, and G:F ratio throughout the trial. And the results are accordance with the previous paper of our laboratory [15], which evidenced positive effects on growth performance in the overall period associated with the inclusion of multi-strain probiotics (B. licheniformis and B. subtilis) in the diets. Generally, probiotics or probiotics mixtures could improve ADG [16-18] and increase G:F ratio [19, 20] in post-weaned piglets. However, the influence of probiotics on ADFI is inconsistent. In agreement with our results, Nguyen et al [21] documented that increasing the inclusion of the probiotics mixture (Bacillus coagulans, B. licheniformis, B. subtilis, and Clostridium butyricum) levels in the diets linearly increased the ADG and ADFI for day 0 to 7 as well as ADG for day 8 to 21. However, Zhao et al [22] believed probiotics (Lactobacillus reuteri and Lactobacillus plantarum) blend could not affect ADFI. Different probiotics strains and concentration of probiotics might be an important factor affecting the ADFI. Especially, since probiotics also live on nutrient, they might compete with host for nutrients in the diet or make hosts require more feed. 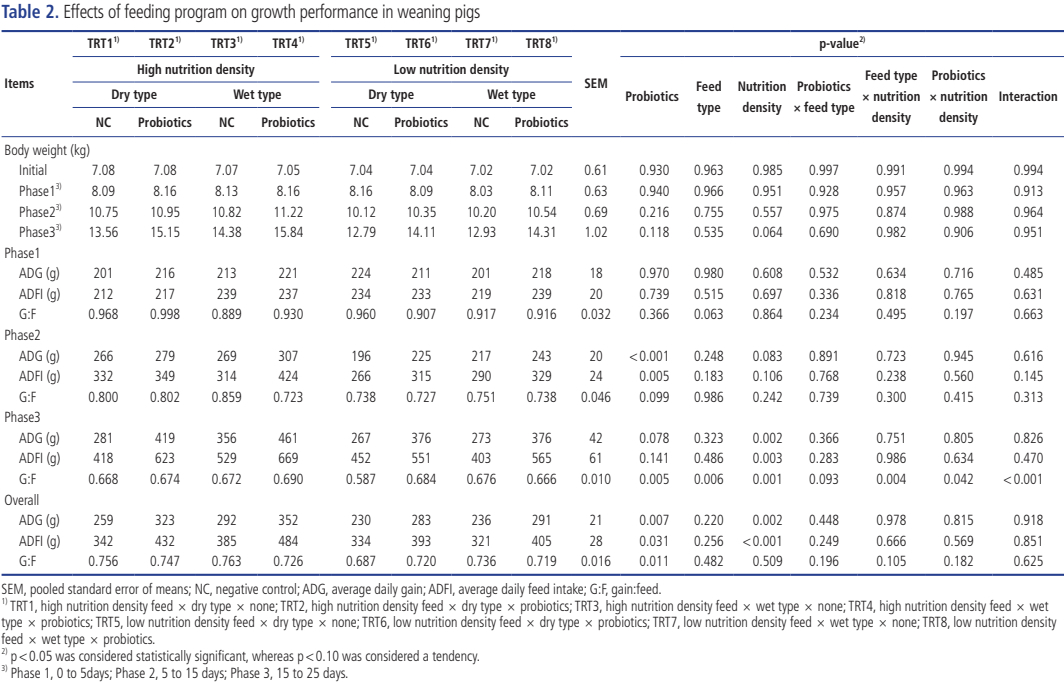 The key factor underlying the poor postweaning performance is the immediate reduction in FI due to the abrupt transition from liquid milk to less digestible feeds [23,24], therefore, sufficient FI is a big challenge for subsequent growth performance. Previous studies indicated liquid feeding reconstituted to 13% DM and fed via liquid feeders in the early weaning period improves FI which resulted in greater body weight gain [25,26]. Whereas, this study showed liquid feed which were reconstituted to 25% DM only enhanced G:F ratio. The difference might result from the different DM. Geary et al [27] reported DM content in the range of 255 to 149 g/kg had no significant effect on DM intake post-weaning 4 weeks. Similarity, when Yang et al [28] fed the piglet liquid feed in a ratio of 1:2 from d 0 to d 28, no difference was found in ADFI, but there was an enhanced G:F. There are three possible reasons for this result. Firstly, water plays a crucial role in the muscle growth, which is a major part of the composition of organ and tissues, so enough water intake could be a reason for better G:F ratio. Secondly, a better transition from milk feeding can reduce the weaning stress and lead to a better G:F ratio. Thirdly, comparing with dry feed treatment, a lower fecal score and a tendency of better energy digestibility in wet feed group presented in this study also contributed to the improved G:F ratio. 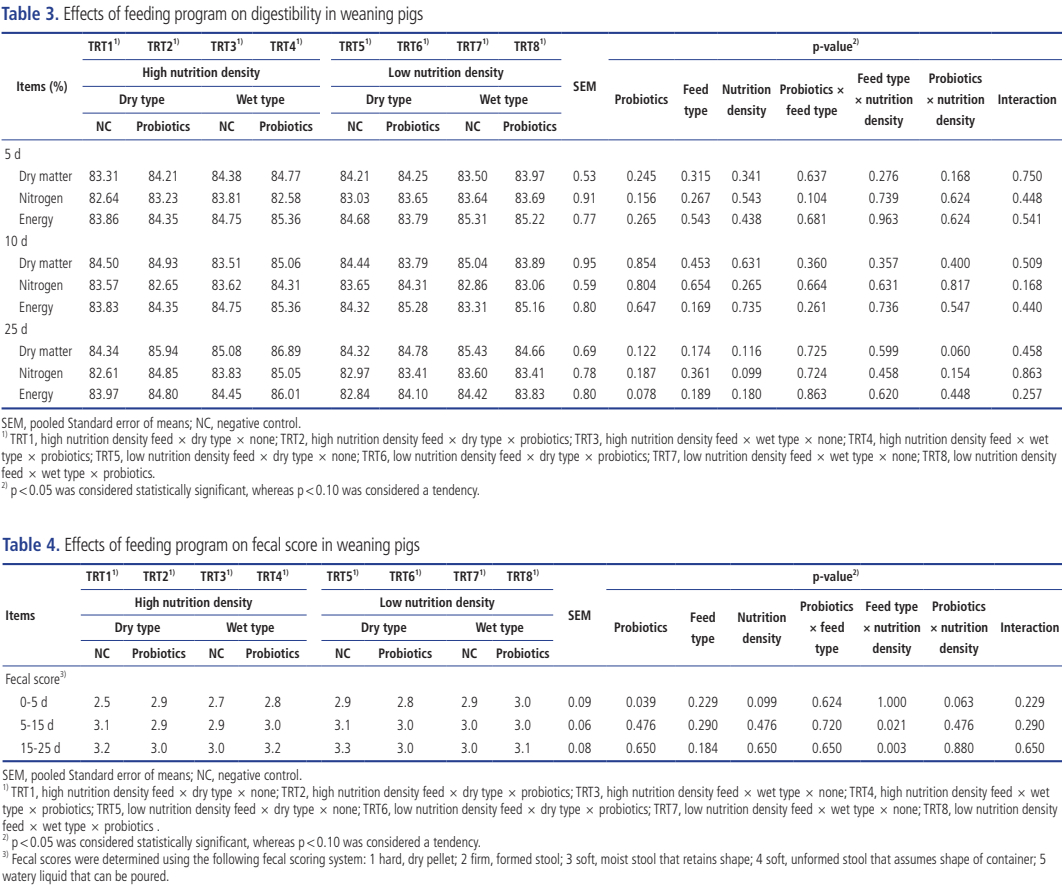 Probiotics and nutrition density showed an interactive relationship in G:F ratio, which meant probiotics improved G:F ratio more dramatically in the high-nutrition diet. Similarly, our previous studies of Meng et al [29] and Yan et al [30] reported supplementation probiotics in high nutrition diets raised nutrient digestibility and reduced fecal gas emissions in growing pigs. And they believed that the interactive effect could be the increased microflora balance, which led to a better metabolism and transformation of feed into body mass. In our viewpoint, piglets fed relatively higher nutrition diet are more likely to suffer nutritional diarrhea, which results from that indigestible substrate inducing an explosive growth of bacteria and a disturbance of the colonization resistance [31]. Normally transient Escherichia coli strains in the gut [32] can multiply and attach. This study confirmed that the reason for positive effect in relatively high nutrition diet might be that probiotics play a role in balancing gut microflora, benefitting intestinal integrity to relieve intestinal stress under high nutrition [33]. However, Lan et al [34] whose paper reported the beneficial effects of probiotics complex supplementation on ADFI is more dramatic with low nutrient density (3,850 kcal/kg vs 4,000 kcal/kg), believed pigs were able to get same energy by increasing FI when low energy diets were provided. The difference interaction between nutrition level and probiotics might be caused by the actual energy in those trial diets and the different growth stages. There was a positive fecal score interaction between high nutrition diet and liquid feed. Relatively, the G:F ratio was improved more dramatically with liquid feed in the highnutrition diet. Those two results might imply that comparing to NRC [10] nutrition recommendation, a higher nutrition formula should be considered when liquid feed is fed to piglets. Interestingly, there was an interaction on G:F among nutrition levels, probiotics and liquid feed in phase 3. Therefore, supplementation probiotics into liquid diet at high nutrition might be a whole solution to improve growth performance and health status in post-weaning pigs. When piglets are fed in different feeding programs or at various nutrition designs, additives applications should be considered specifically. However, the interaction could not be found in overall growth performance.

Article made possible through the contribution of In Ho Kim et al.