Exploring the true value of phytase: phosphorus and beyond

Exploring the true value of phytase: phosphorus and beyond

The integration of exogenous phytase into the feed industry in the early 90's was driven by an increased demand to cap phosphorus excretion by intensive poultry and pig production. In the following years, the research interest in this field opened up new avenues, exploring the value of phytase beyond phosphorus. During these years, a wealth of published information was presented suggesting that the benefits of phytate breakdown were manifold and encompasses 'sparing' of other mineral cations, energy, and amino acids in addition to its core objective i.e. making phytate bound P available to the animals. The scientific developments in basic and applied research in this field constantly shaped the way phytases were perceived and used by the commercial feed industry; hence, it is not surprising that today the phytase molecule itself and its practical application is very different from what it had been at the time of its first use. The current article tracks this evolution and provides an outline of new applications and benefits of phytase in animal feed. The focal point of the discussion is, 1) complete destruction of dietary phytate has been made possible through higher doses of efficient phytases and, 2) attaining the objective of complete phytate hydrolysis adds substantially to the net commercial returns and environmental benefits associated with phytase use.

Reliance on inorganic phosphates – down to none!

For almost two decades post-introduction, use of 500 FTU of phytase targetting 'release' of 0.10-0.12% available-P remained the industry norm. Developments of new phytases capable of releasing higher-P- for-dose (FTU) were introduced and high-dose application of these phytases was explored, making extensive phytate hydrolysis a possibility. This resulted in renewed interest in further removal of inorganic phosphates which not only brings benefits from a commercial but also an environmental perspective. A series of studies by AB Vista demonstrated 1000-1500 FTU of phytase was sufficient to support optimal growth performance and bone mineralization of broilers fed all-vegetable diets practically devoid of supplemental inorganic phosphates. One of these studies observed optimal body weight gain and feed efficiency of broilers when 1500 FTU of an enhanced E.Coli phytase was supplemented to a corn-soy diet containing 2.6 kg DCP per metric ton for starter (1-10 d) with no added phosphate for grower (11-25 d) or finisher (26-42 d) diets. These results were in line with a preceding study in which all the supplemental inorganic phosphate in the grower (15-28 d) and finisher (29-42 d) diets was removed and replaced with 1500 FTU of phytase in a high phytate corn, soy rice bran diet; the starter (0-14 d) diet in this experiment had marginal (1.2 kg per metric ton) added DCP. This was already several years after the idea of zero-dependence on inorganic phosphates was demonstrated for laying diets. Given the value created with such a strategy, it is reasonable to predict that the future poultry industry will have very little, if any, reliance on supplemental inorganic phosphates.

Improved digestibility of energy (AME) and amino acids (AA) by phytases has been well documented. Based on the published information, the improvements attributed to phytase range from 40-150 kcal of AME per kg of diet and from 2-4% increase in apparent ileal digestibility of AA. Figure 1 summarizes the results of a study demonstrating complete recovery of growth performance when 500 FTU were added to negative control (NC) diet formulated with reduced P, Ca, AME, and AA corresponding to the proposed matrix-for-dose of the phytase. Since AME and AA are the key cost components in poultry and pig diets, application of the energy and AA matrix of phytase results in feed cost savings in the range of USD 10-15 per metric ton of feed.

There is evidence to suggest that targeting almost complete hydrolysis of phytate could improve feed efficiency. Figure 2 is based on the average of six independent broiler studies conducted using similar design to explore the potential of incremental doses of an enhanced E.Coli-derived phytase beyond the standard 500 FTU. The set of trials included a control diet (PC) formulated to industry standard nutrients without phytase. In the negative control (NC) the level of available phosphorus and calcium were reduced to the proposed matrix of 500 FTU of the test phytase (-0.15% Av.P and -0.165% Ca). The data suggested that 500 FTU of phytase had a similar feed efficiency to that of PC (and this is how the majority of the feed industry uses a phytase in practice) but increasing the dosage over and above 500 FTU resulted in a linear improvement in the feed efficiency – with an average 4 points improvement in weight corrected FCR at 1500 FTU (super-dose) compared with 500 FTU (conventional) phytase treatment; under most commercial scenarios, an improvement of 4 points weight corrected FCR is equivalent to feed savings worth of USD 10-12 per metric ton. The superdosing benefit appears to relate to the release of nutrients and provision of inositol associated with an almost complete phytate hydrolysis in the gut.

There are two ways phytase, especially at dose commensurate to extensive phytate hydrolysis, could possibly lead to better 'gut-health'; 1) phytate hydrolysis improves amino acid digestibility resulting in  less undigested nitrogen to enter lower gut; this would likely suppress nitrogen-fermentation which is often associated with pathogenic strains, and 2) complete phytate hydrolysis has been associated with up-regulation of intestinal alkaline phosphatase (AP), possibly through increased supply of lower IP-esters especially IP1 and/or via its 'sparing' effect on Zn and Mg which are the key metals for the activation of AP. AP has been shown to reduce antigenicity of bacterial endotoxin lipopolysaccharide (LPS) as e.g. demonstrated in E.Colichallenge models, and 3) phytase use with the appropriate Ca matrix reduces total dietary Ca which has been show to ameliorate negative effects of necrotic enteritis in broiler

Wet litter is one of the common husbandry problems in intensive poultry and pig production causing significant financial losses. These losses are associated with reduced end-product quality, increased infection levels, culls and reduced growth rates. The correction of the problem requires careful attention to multitude of factors, including nutrition. University and field trials conducted by AB Vista suggests the use of phytase in general, and superdose (~1500 FTU) in particular, may help reduce the incidence. Comparing 500 FTU (conventional dose) with 1500 FTU (superdose), the results of one of these studies showed improved litter scores and lowered incidence of footpad dermatitis with a superdose of phytase. It is probable that these observations are linked to the effect of phytase on improved gut-health as discussed above. Besides, by decreasing supplemental Ca and Na, phytase can help minimize the possible impact of these mineral cations on wet-litter.

Trial work at AB Vista explored the effect of a high dose of phytase on reproductive performance of poultry and pigs. It was hypothesized that phytate hydrolysis may influence reproductive efficiency via, 1) improved availability of trace minerals crucial to fertility and hatchability, and 2) provision of inositol which has multiple effects on metabolism of glucose and fats and antioxidant properties. Supporting the above proposal, we observed a significant increase in concentration of Se and Zn in the yolk of commercial layers with diets supplemented with 1500 FTU phytase compared with un-supplemented controls. The observation that 2000 FTU increased semen concentration of PIC boars by 17% and number of doses per collection by 11% compared with control (fed conventional 500 FTU) also demonstrates the value created by superdosing. Further substantiating the original hypothesis, work conducted in France using broiler roosters demonstrated a significant increase in percentage live spermatozoa at 51 weeks of age which tended to be maintained to 61 weeks of age in a group fed a diet supplemented with 1300 FTU of an enhanced E.Coli phytase compared with those receiving 500 FTU of a standard wild-type E.Coli phytase.

Animal protein meals are often expensive but are occasionally forced in specific rations in view of their high digestibility and palatability. Examples of these applications are the use of spray-dried-plasma to promote early feed intake in nursery piglets or specific aqua feeds where animal protein sources like fish meal, feather meal, or poultry by-product meals are incorporated, sometimes even against cost gradient. In such cases, easing out the ingredient constraints often results in significant replacement of these expensive feed ingredients by cheaper plant-based proteins. Increasing the dietary level of vegetable protein meals at the expense of animal proteins offers significant feed cost savings but raises the concern of poor growth performance due mainly through increasing concentration of fibre and phytate in these diets.

A study conducted with a large integrator in the USA demonstrated that 2000 FTU phytase completely recovered the loss in weight gain and feed efficiency of nursery piglets as a result of a 6 and 3% replacement of spray-dried-plasma with soybean meal respectively for 1 to 7, and 8 to 21 d post-weaning. Likewise, in a phytase dose-response study conducted in Thailand, we observed that supplementation of 4500 FTU to negative control diet (no fish meal) restored growth performance of African catfish to that of the experimental control (10% fish meal). These findings suggest that high dose of phytase may be used as a tool to mitigate the high prices of animal protein without compromising the growth performance in a number of animal species.

Phytase is perhaps one of most extensively researched feed additive. It is unique in terms of the coverage of benefits it potentially offers and that these benefits are well beyond, and several-fold in order of what it was initially intended to offer. The commercial returns of phytase use range from USD 2-4 per metric ton (MT) of feed given the target was to 'spare' P, to USD 10-15 per MT when the full nutrient matrix is applied or the enzyme is super-dosed for improved growth performance, to as much as USD 60-80 per MT when it replaces 3% spray-dried-plasma in nursery piglet diets. Smart use of phytase promises enormous commercial and environmental benefits. 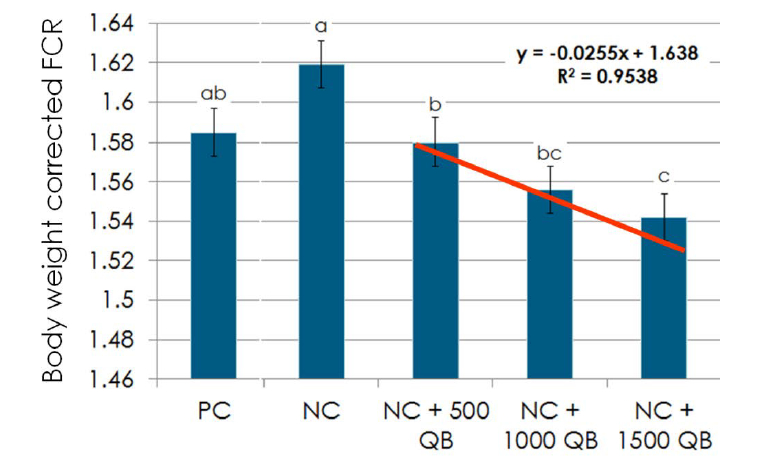 Article made possible through the contribution of Usama Aftab and AB Vista Asia Pte Ltd. Singapore