August 9, 2019
Bad but could be worse: African Swine Fever spreads into Vietnam
China's southern neighbor is now experiencing ASF deaths and mass swine cullings. Domestic meat lines, feed output are all impacted, as are imports of meat and feed crops. Recovery is expected to be quicker and easier than it will be for China but a pork import trend could also be starting.
By Eric J. Brooks
An eFeedLink Hot Topic 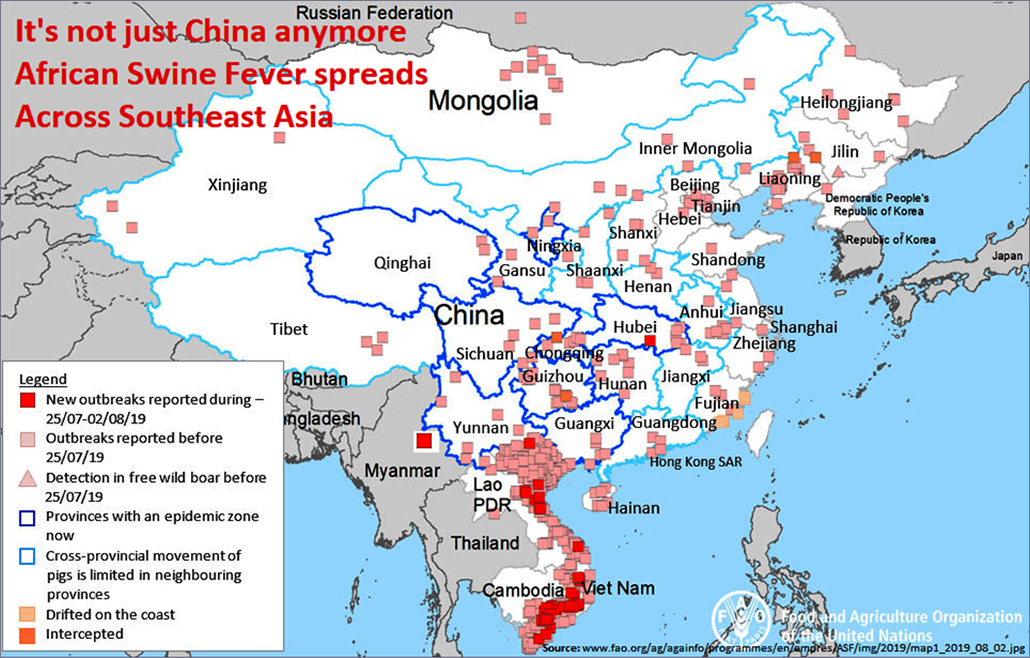 While global agribusiness focusses its attention of China's African Swine Fever (ASF) outbreaks, the epidemic has quietly spread into one of Southeast Asia's largest, fastest-growing feed and livestock markets.
–As the attached map shows, at this time, a majority of the newest, most recent ASF cases are breaking out in Vietnam, not China. While there are now reports of ASF in Cambodia, Laos and most recently Myanmar, at the present time, it is spreading more rapidly in Vietnam than any other nation.
In May, Vietnam's government announced that 1.2 million hogs had died or been culled due to ASF. By mid-June, the number had been revised upward to 2.5 million head. In late July, Rabobank's Q3 Pork Quarterly estimated that as of early Q3 2019, 3.0 million hogs had been lost.
Then, in early August, the UN FAO estimated that 3.7 Vietnamese pigs had either died or been culled due to ASF. This is equal to 13.6% of the 27.3 million hog inventory Vietnam had entering 2019.