To prevent swine dysentery and ileitis, Nor-feed has specifically designed a product called NSOAB9® permitting the modulation of gut microbiota.

Also called Porcine Proliferative Enteropathy (PPE), ileitis is an infectious enteric disease. Its prevalence is getting very high in Europe and in Asia, reaching over 90% of the farms. Due to contamination by Lawsoniaintracellularis, the disease is characterised by thickening of the mucosa of the intestine due to hyperplasia of the crypt enterocytes. Once in the digestive tract, the bacteria are able to overpass the stomach acidity to colonise the intestine.The damages are mostly happening in the ileum, where inflammation of the enterocytes causes immature epithelium development. This results in nutrient absorption reduction, leading to heavy negative impact on swine growth (up to -40% of the feed conversion ratio).

Due to ileitis, mortality is observed to reach up to 5% in cases of severe contamination, especially when pens are clean with a contamination happening at the late fattening stage (>80kg). Pigs might not have set up its immunity to Lawsonia at the earlier stages inducing important deficiency in the body.Losses can reach up to US$20/pig for each infected pig in the herd.

On the other hand, in farmsfacing heavy pathogenic pressure, contamination is more likely to happen on piglets and young growers, with growth performance impacted throughout thefattening period even if mortality rate remains reasonable. This is why, in both cases, ileitis is costly. A loss of 0.5pts on FCR would lead to an increase of feed consumption by 45kg/pig.

Often being confused with ileitis, swine dysentery (SD) is also known to be one of the major diseases on swine farms, and is caused by Brachyspirahyodysenteriae and Brachyspirapilosicoli. Like ileitis, contamination is known to be happen orally and spread to the environment viainfected faeces. SD ranges from mild, mucous diarrhoea with unaltered general condition to severe haemorrhagic diarrhoea. Heavily infected pigs are condemned to remain infected, leading to high mortality rate, reaching 50 to 90%.

To prevent swine dysentery and ileitis, Nor-Feed has specifically designed a product called NSOAB9 based on plant extract and standardised on selected saponins and flavonoids permitting the modulation of gut microbiota. The efficacy of NSOAB9 has been proven via a RT-PCR test, showing a reduction of the targeted pathogens by 90% after 56 days (Figure).

Used preventively in farms with high risk of ileitis and or swine dysentery, NSOAB9 has shown its ability to maintain good performance under degraded sanitary conditions. 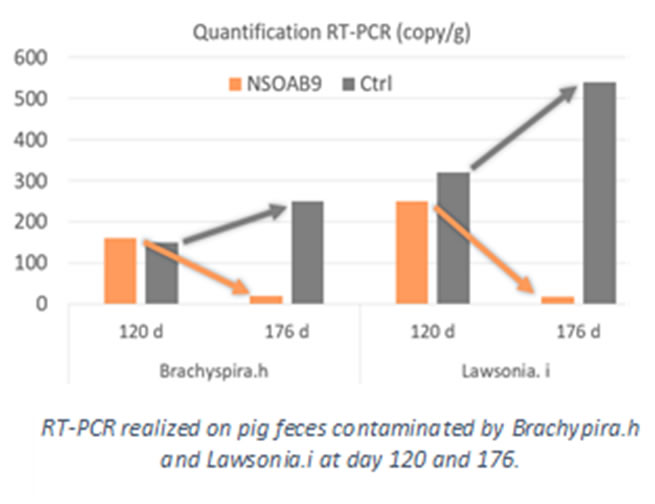