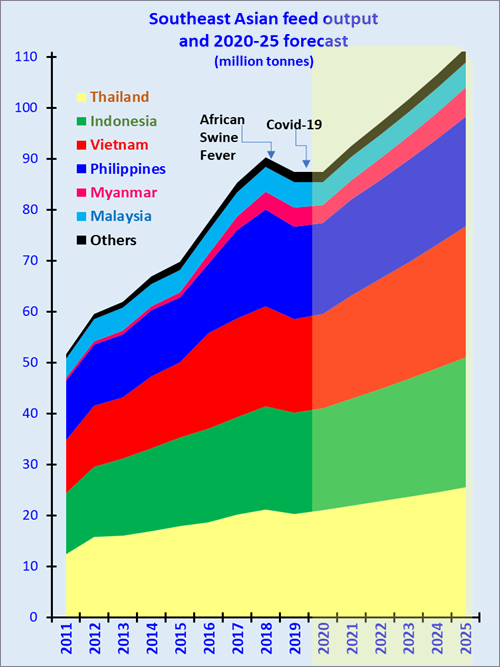 Heavily populated, land-scarce but with rapidly rising disposable incomes, Southeast Asia's 660 million people have replaced  China as the locomotive of global agribusiness growth. From 50.3 million tonnes in 2011 grew 8.2% annually through 2018.
China's stagnant feed output is barely higher in 2020 than it was in 2010, but Southeast Asian feed production has been growing 8% annually, doubling output in under a decade. Vietnam, Thailand, Philippines, Indonesia, and Myanmar are growing as fast as China once did. In world agribusiness "nanyang" (as China calls Southeast Asia) is taking center stage.
Africa may be growing faster than ASEAN but its 1.2 billion people produce 30% less feed than Brazil's 210 million people. India's feed milling is expanding almost as fast as Southeast Asia's –but ASEAN's 660 million people collectively produce twice as much feed annually as India's 1.4 billion.
Moreover, unlike poultry and dairy-centered India, ASEAN mills supply feed to an exceptionally wide spectrum of livestock of aquaculture species. Economically buoyant, ASEAN economies were less impacted by the COVID-19 pandemic than other parts of the world. Southeast Asia's 2019 feed output fell because of ASF but is poised to stay flat in 2020, before rebounding into rapid growth from 2021 onwards.
By 2018, the combined feed output of Thailand(21.1 million tonnes), Indonesia (20.28), Vietnam (19.6), Philippines (19.0), Malaysia (3.8) and other ASEAN nations (1.8) totaled 88.4 million tonnes when first ASF and now COVID-19 beat it back to 85 million tonnes.
Our post COVID-19 projected 5% cumulative annual growth rate (CAGR) for Southeast Asia up to the year 2025 is deliberately conservative, it does mean that within five years, ASEAN feed output will total almost 110 million tonnes. This growth rate is far faster than that of any comparable world agribusiness region and makes Southeast Asia the focus of our attention.
But few nations achieve high-income status and high per capita meat consumption without becoming mass importers of meat, feed inputs, or both. Japan and South Korea opted for mass meat imports and stagnant feed production. Most Southeast Asian governments have opted to localize meat production. Hence, the accelerating rates of feed output and skyrocketing volumes of feed crop imports.
Hence, China's growth was mostly an internal affair but Southeast Asian feed and livestock sectors have always been heavily trade-dependent. With their purchase volume tripling since 2000, five of the top 10 soymeal importing nations are members of the ASEAN economic community. Vietnam (5.35 million tonnes), Indonesia (4.8mt), Philippines (3.10mt), Thailand (2.80mt), and Malaysia (1.43mt) and their ASEAN neighbors collectively imported 17.2 million tonnes of soymeal, accounting for 27% of world market soymeal purchases.
ASEAN corn imports have grown even more rapidly, quadrupling from 4.3 million tonnes in 2000 to over 18 million tonnes today. This occurred despite many protectionist restrictions on the free importing of corn in places such as Indonesia and the Philippines. This in turn caused the region's feed wheat imports to rise from a million tonnes to seven million tonnes in less than twenty years.
In conclusion, once the economic damage from ASF and COVID-19 passes, the fast growth and dynamic potential of Southeast Asian agribusiness will be increasingly actualized by deep-pocketed Thai agribusiness. From Indonesia to Philippines, Cambodia to Myanmar, Southeast Asia's growing food abundance will owe much to Made-in-Thailand agribusiness financing, technology, and farm management techniques.
Even so, a plentiful, ever-expanding supply of imported feed inputs will be required to sustain the Southeast Asian feed and livestock boom. "Nanyang", as China traditionally called Southeast Asia, will soon compete against it for imported feed crops and their derivatives.