July 25, 2019
It's not just African Swine Fever! How ten years of setbacks derailed China's feed and livestock boom
Animal diseases and food safety scandals have devastated one formerly fast-growing Chinese protein line after another –and none has yet recovered to previous output levels or grown at rates once taken for granted.
By Eric J. Brooks
An eFeedLink Hot topic 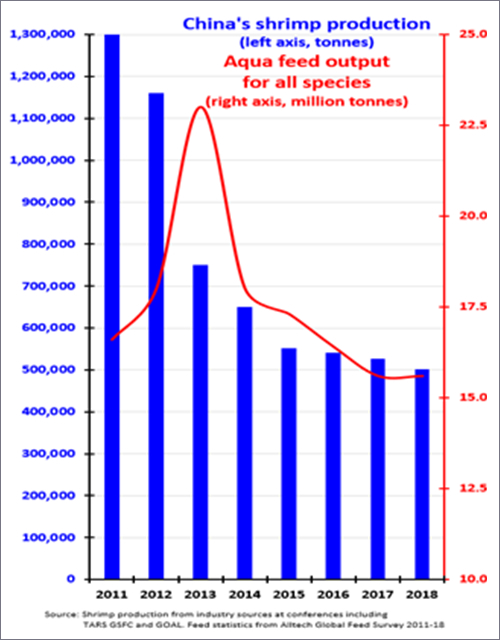 From a peak of 1.4 million tonnes in 2010, output fell to near 500,000 tonnes and never recovered. In less than ten years caused China to turn from the world's second-largest shrimp exporter to its largest importer. Uncontrollable disease outbreaks constrained the output of shrimp and other value-added aquatic species. In many cases, diseases could only be controlled by using antibiotics or other additives at high levels that got China's seafood exports banned from world markets.
This caused China's once rapidly aquaculture output to rise by no more than 2% annually or suffer outright declines in recent years. Aqua feed output fell from an Alltech estimated 23.0 million tonnes in 2013 to 15.7 million tonnes last year.
Chicken was the next livestock line to fall to a succession of disease outbreaks and food safety issues. At first, due to food safety scandals involving antibiotic overuse, illegal additives and the approval of stale chicken for human consumption, output growth halted. It peaked at 13.86 million tonnes in 2012 after the first of these food safety scandals broke out late that year.
Thereafter, the years 2013 through 2019 saw nearly a dozen bird flu outbreaks. On several occasions, these forced the culling of up to 25% of China's broiler flock and resulted in hundreds of human bird flu deaths. Hence, both chicken meat's supply and consumption were badly impacted.
In an attempt to get avian influenza under control, China banned AA grandparent stock imports from the US and many European supplier companies. That forced China to rely on slower growing, feed-inefficient native broilers for up to half its chicken meat, which further depressed output. Even with an ASF-induced pork shortage stimulating broiler output growth of 8.1% in 2019, output remains 9% below its 2012 peak of 13.86 million tonnes.
Poultry was not the only struggling mainstream meat line. Even before ASF hit, China's swine sector was having severe problems. From 2007 onwards, several serious disease outbreaks constrained output, though none on a scale comparable to the current ASF epidemic.
Moreover, China's government placates its urban majority population by keeping pork prices artificially low on occasions like the Mid-Autumn Festival or Chinese New Year, which traditionally accounted for a large proportion of annual hog farming profits. At the same time, it pursued feed grain self-sufficiency by keeping Chinese corn 100% more expensive than world prices.
The resulting combination of artificially high hog feed costs and low pork selling prices decimated hog farming earning and undermined the incentive to expand production. The situation was made worse by hog disease epidemics that broke out in the mid-2010s. Thus, after peaking at 58 million tonnes in 2014, pork output slumped into the 54 million range that had been exceeded in 2012.
–China's government was attempting to "fix the problem" by gradually liberalizing its corn market when ASF hit, creating a problem of catastrophic proportions: Prior to the ASF outbreaks, China owned 50% of the world's pigs.
Chinese culture is far more attached to eating pork than American culture is to eating beef. At 40kg, China's pre-ASF per capita pork consumption is 73% more than the 23kg eaten by Americans. It even exceeds the 25kg of beef eaten per capita by Americans. Pork accounted for 67% of China's meat consumption, swine for 50% of its feed demand.
But the disaster caused by ASF extends far beyond China's swine sector or even the world market for pork. Long before ASF hit, one Chinese protein line after another had fallen victim to uncontrollable disease outbreaks, food safety scandals and import dependence –with deep interlinks between the three.
Unsanitary animal growing conditions caused disease outbreaks and motivated farmers to overuse antibiotics or banned substances. Domestic production would then falter and consumers shun the local product, creating growing dependence on imports of pork, chicken, shrimp and dairy products.
Moreover, government policies designed to promote corn self-sufficiency forced the use of mycotoxin contaminated corn that weakened animal immune systems, damaged fertility and resulted in lower finishing weights.
Similarly, while ASF's entry into China overland from Russia was probably inevitable, the epidemic made worse by official policies that made it profitable to not report ASF cases and send diseased pigs to market.
In conclusion, ASF is merely the most severe symptom of a much larger problem: China's chronic, decade long agribusiness crisis is not so much due to unfortunate microbial outbreaks, illegal farm animal farming methods or government policies but an entire livestock farming paradigm.
The fact no other developed or developing country faces comparable non-stop disease-and-scandal driven constraints on its meat output implies that this problem is rooted in China's approach to livestock farming.
Chuck Warta, president of Cargill's animal nutrition and pre-mix business implied that ASF is about more than China's pig population. He said "This is not a six-month trend for China to recover. This is a 24-month, 36-month kind of resetting of the world's population of animals [not just pigs]"  --and it will require a complete restructuring of how China undertakes animal protein production.