July 17, 2019
"Officially" an Exporter? Flat output, rapid import growth and China's changing role in the world seafood trade
Behind inaccurate official statistics, China's faces production capacity constraints with a rapidly growing appetite. 2018's flat seafood export volumes and a 3.5% increase in revenues were checkmated by an 18% jump in imports volumes and 44% increase in expenditures. The resulting loss of seafood self-sufficiency is transforming China from a top exporter to world aquaculture's most important buyer.
By Eric J. Brooks
An eFeedLink Hot Topic 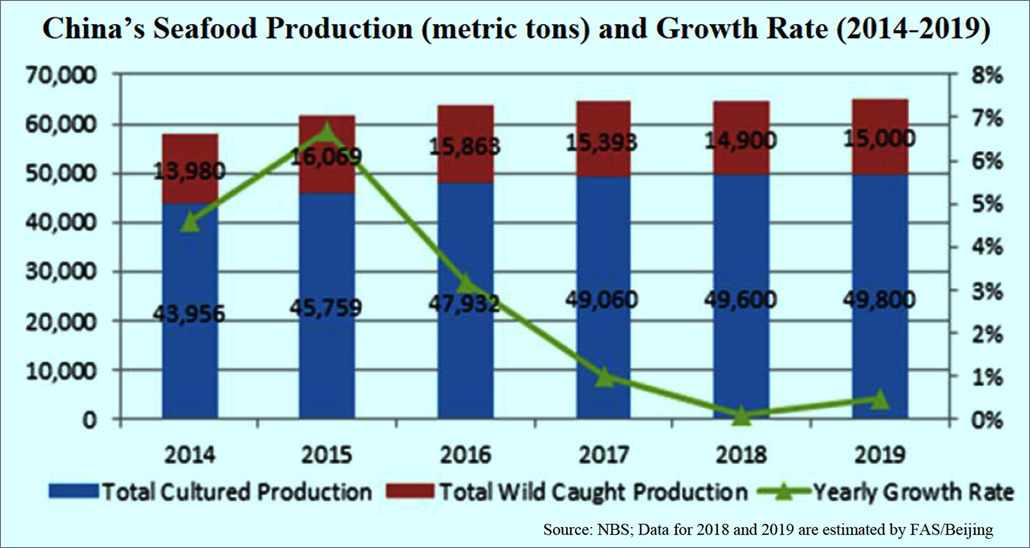 Whether measured by its production, consumption or trade, China thoroughly dominates the world seafood industry, though its role is undergoing rapid transformation, with production dominance gradually giving way to a new role as top buyer and world price setter.
On one hand, with 19% of the world's population, China's estimated 64.5 million tonnes of estimated 2019 seafood output accounts for 36% of world seafood production. It enjoys oligopoly status over many aquaculture lines, with 2019's 49.8 million tonne aquaculture output accounting for nearly 58% of this year's world farmed seafood production.
On the other hand, after growing aggressively and leading world growth for decades, China's seafood output appears to have stopped growing: According to the official 2018 China Fishery Statistics Yearbook, seafood output has been on an undulating plateau, fluctuating in the  64 to 67 million tonne range since 2014.
Not surprisingly, wild-catch production peaked at 16 million tonnes many years ago and currently fluctuates in the 14 to 15.5 million tonnes range, with both pollution and new environmental restrictions on fishing making further growth unlikely.
More surprisingly, China's aquaculture output also appears to have stopped growing: Based on USDA estimates, 2019 will be the third consecutive year that China's aquaculture output is "stuck" in the 49 to 50 million tonnes range. Whereas the industry once enjoyed decades of 10% annual growth, 2019's projected 49.8 million tonnes farmed seafood output is an immaterial 0.4% increase over last year.
Interestingly, the years since 2014 have seen coastal aquaculture (which accounts for 40% of farmed output) continue to inch along with 2.5% annual growth. Inland aquaculture dominates farmed seafood output but has seen flat output "stuck" in the 29 to 30 million tonne range since 2014.
The latter reflects the exhaustion of unexploited frontier aquaculture regions, urbanization encroaching on fish farming regions coincident with the overuse and degradation of once productive inland ponds. Consequently, future aquaculture expansion cannot involve expanding water resource usage and depends purely on technical innovation and productivity gains –a field in which Chinese producers have at best a spotty past record.
Fish accounted for 54.6% or 26.8 million tonnes of China's 2017 49.06 million tonne aquaculture output, with traditional native carp species accounting for 18.1 million tonnes of finfish production. While dominating output volumes, carp are a low-value added line primarily produced for domestic consumption.
Out of the remaining 8.7 million tonnes of finfish grown, tilapia's FAO estimated 1.75 million tonne 2018 output accounts makes it the second-largest line by volume and the most important one by value and trade. The warm southern provinces of Guangdong, Hainan, Guangxi, Yunnan, and Fujian account for 96% of tilapia output
Led by pangasius, catfish species make up the second most important finfish line by value and third most by volume, with their 2019 output at a USDA estimated 800,000 tonnes. Sichuan, Jiangxi, Guangxi, Guangdong, Hunan, and Hubei account for two-thirds of China's pangasius output, which faces fierce cost competition from its southern neighbor Vietnam.
Whereas tilapia output was mostly exported and pangasius primarily consumed domestically, both these species have encountered world market challenges. In particular, China's dominance over the world tilapia trade is eroding. It cannot boost its production by more than 3% annually at this time but lower-cost tilapia producers in regions as diverse as Egypt, Ghana and Brazil are expanding output at 5% to 10% annual rates.
Bivalve and mollusk family shellfish account for the next largest volume segment after finfish, with a USDA estimated 2018 output of approximately 15 million tonnes. Encompassing a large array of fresh and saltwater species including oysters, clams, snails and cockles, they are of intermediate value but mostly domestically oriented.
Accounting for a doubtful 4.5 million tonnes of output, crustaceans are Chinese aquaculture's most value-added but troubled farmed seafood segment. While encompassing many species such as crab, crayfish and lobster, shrimp accounts for at least a third of China's crustacean output by volume and at one time was a leading farmed seafood, export earner. It also led world shrimp exports for most of the 2000s.
After setting a (still unbroken) world record output near 1.2 million tonnes in 2011, diseases such as EMS devastated China's shrimp production and rendered a large proportion of productive ponds unusable to this day. As recently as two years ago, FAO statistics claimed that China was growing over a million tonnes of shrimp, but no one in the world shrimp sector took those estimates seriously.
--Whereas the FAO recently revised China's 2018 shrimp output estimate into the 800,000 to 850,000 tonnes, speakers at recent seafood industry conferences stated that production could be as low as 500,000 tonnes. What we do know for certain is that a nation that was a world-leading shrimp exporter ten years ago is overtaking America to become the leading shrimp importer. 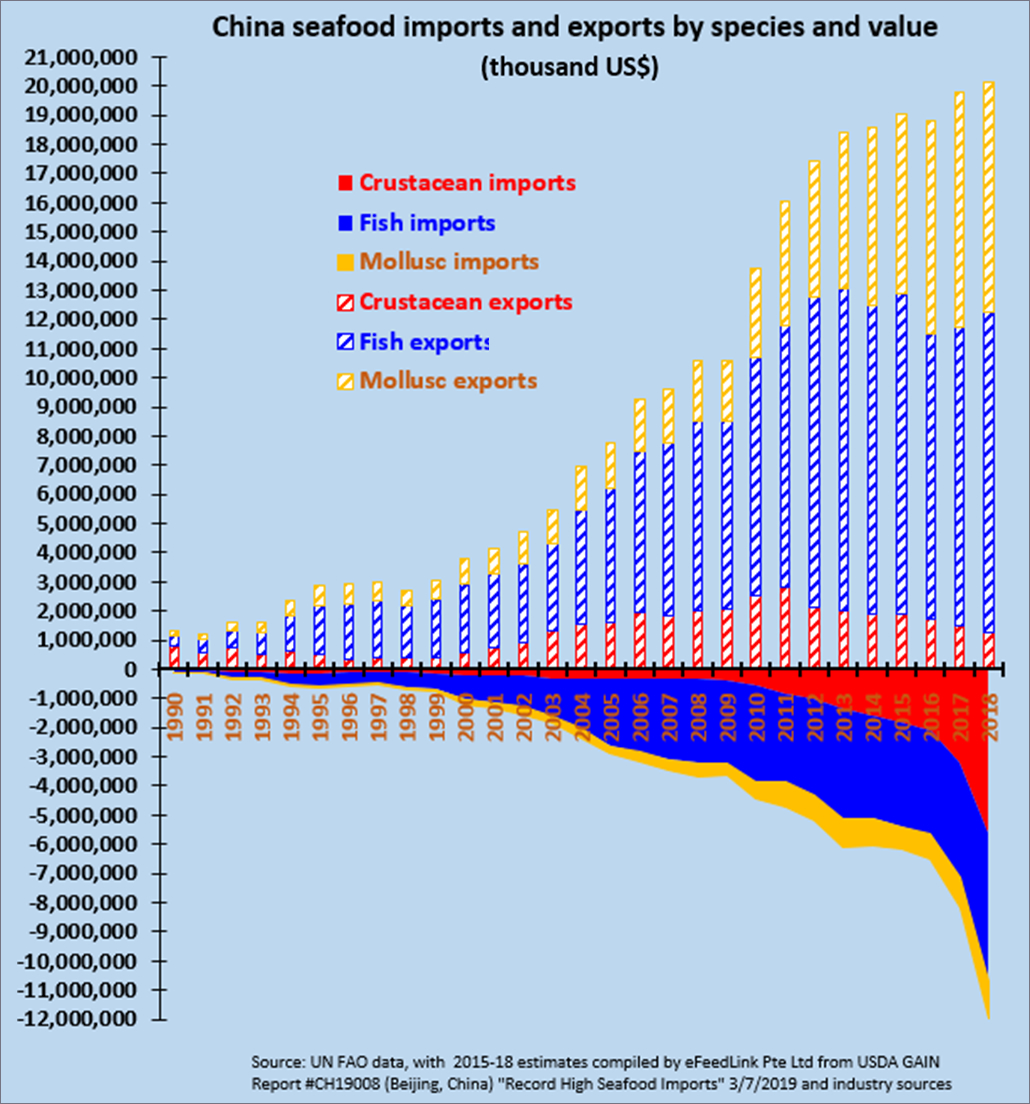 China's shrimp sector troubles are a big part of the reason why its actual aquaculture production might be lower than what is being estimated by official Chinese, USDA and FAO. This uncertainty surrounding actual aquaculture output and its clearly faltering output expansion coincided with rapid seafood consumption growth –and that is at the heart of China's changing world market role.
For the past five years, both domestic aquaculture and wild capture production have remained roughly constant –but demand is growing by 3%+ annually. Moreover, demand for certain seafood lines whose production has either fallen (eg. Shrimp) or are not grown domestically (e.g. salmon) has grown substantially faster.
This means that while China remains the world's top seafood exporter by volume, it now roughly imports as much as it exports and will become a net seafood buyer in years to come.
--But that estimate is based on official statistics, which tend to overstate domestic Chinese production and exports while undercounting exports. When we adjust trade figures to trade volume levels estimated by industry stakeholders, we discover China is already a net seafood importer by volume –and will become a net buyer by value by the early 2020s.
After rising 8.1% in 2017, the USDA reports that China's 2018 seafood import volume increased an even steeper 18%, to 3.45 million tonnes. The value of imports increased even more rapidly, totaling US$11.9 billion, up US$3.62 billion or 43.6% more than the value of seafood purchased in 2017.
By comparison, at 4.1 million tonnes, seafood export volumes were unchanged over 2017. While the value of these imports increased by 3.5% to US$20.5 billion, up a mere US$0.8 billion over 2017's USDA estimated US$19.8 billion.
Constrained by stagnant production growth and higher production costs than new, emerging producers, US-China trade war politics have added a new source of frustration to Chinese seafood exporters: America's 25% import tax on once easily importable seafood lines such as scallops or tilapia has made it difficult for even producers with rising output to profitably export their output.
Moreover, there is a strong tendency to understate total seafood imports. For example, whereas "official" 2018 Chinese import volumes for all crustacean species 381,000 tonnes, the fact that much larger quantities of shrimp alone were smuggled into Vietnam is known by everyone in the industry.
Rather than being around the official 192,000-tonne figure valued at US$1.36 billion a panelist at this year's Global Seafood Market Conference estimated total (official and smuggled) imports of shrimp alone at 650,000 tonnes.
That implies a 2018 shrimp import value of US$4.60 billion –US$3.24 billion more than official figures. China Aquatic Products Processing and Marketing Alliance (CAPPMA) president Cui He estimates official and smuggled shrimp imports of 800,000 tonnes in 2019, with a value of at least US$5.5 billion.
Nor do official Chinese import statistics include fishmeal imports, which amounted to 1.4 million tonnes and represented an import expenditure of approximately US$2.0 billion. All this implies that China's net seafood trade balance is far different than official statistics would lead one to believe.
All this does not capture the impact of unofficial Chinese imports of species such as pangasius or tilapia from Vietnam (which are considered cheaper and of higher quality than locally produced ones), which amount to several hundred thousand more tonnes of unofficial seafood purchases.
--Even so, by merely factoring in the real level of shrimp and fishmeal imports, China's real 2018 volume of seafood product imports amounts to approximately 5.3 million tonnes –29% or 1.2 million tonnes more than it exported.
Revenue-wise, if one includes the real level of shrimp and fishmeal imports, US$20.5 billion of exports still offset US$16.5 billion of imports. But this is the key metric: Even on the basis of unadjusted USDA trade figures, 2018 saw China's seafood exports stay flat in volume terms and rise just 3.5% in value terms –while imports jumped 18% by volume and an even steeper 44% by value.
Nor is this a short-term trend: From 2008 through 2018, exports increased 30% while imports rose 50%. Over this same time period, the value of seafood exports doubled but that of imports more than tripled. This trend has accelerated in recent years:  Since 2014, the value of exports increased by 19.4% while that of imports jumped 98%.
This reflects more than imports outpacing exports or the depletion of domestic aquaculture production capacity: It is a symptom of how China's increasingly affluent consumers are substituting less expensive domestically raised species such as carp with pricier imported seafood lines such as salmon.
Whatever one makes of the above adjustments, the following facts and implications are clear: After decades of rapid growth, China's collective seafood output appears to have hit a "wall" of near-constant production in the years since 2014.
Alongside flat wild catches, the declining output of aquaculture species such as shrimp is being offset by higher output of other species; and this has made for five years of nearly flat seafood production. While this has constrained export volumes, China's appetite for high-value species such as salmon, shrimp or shellfish continues to increase by 3% to 5% annually.
This has created a situation where the volume and value of exports are rising incrementally but imports are rising at rates 20% to 40% annually. Once a solid net exporter, this is already tipping China's physical seafood trade into net importer status. In dollar terms, we can also expect China to buy more seafood than it sells no later than the mid-2020s.
China's change from seafood net exporter to dominant, leading importer will impact the world seafood trade in the 2020s as much as America's mid-20th-century switch from petroleum exporter to importer transformed the world energy market.