July 14, 2020
Bird flu, COVID-19 lockdowns keep EU poultry output flat, reduce exports 10%
Polish and Hungarian supply, Spanish and Italian demand all affected.
By Eric J. Brooks
An eFeedLink Hot Topic
As is the case in Asia and America, the EU sector is also facing COVID-19 based supply and demand challenges. Faced with oversupply and slack prices, EU producers endured 2019 thin margins or net losses, with production rising an AVEC estimated 1.6% to 16.03 million tonnes, up from 15.78 million in 2018. This was mainly due to a 4% increase the output of leading producer Poland (to 2.735 million tonnes).
It was complemented by a 6% increase in Spanish production from 1.6 to 1.7 million tonnes. This enabled Spain to overtake France and Germany to become Europe's second-largest poultry meat maker.
Demand-wise, the lockdown and recession are forcing millions of newly unemployed, cash strapped Europeans to substitute chicken in place of more expensive red meat. Hence, EU per capita chicken consumption is expected to continue on its rising trend in 2020, up 0.8% to 23.6kg.
Supply-wise, six months of serious bird flu outbreaks in Poland, Ukraine, and Hungary will seriously impact EU poultry meat exports. Several months after breaking out rampantly in late 2019, South Africa, China, South Korea, Singapore, Japan, Taiwan, United Arab Emirates, and the Philippines banned all Polish and Hungarian chicken meat imports. Hong Kong, Kazakhstan, Cuba, and Saudi Arabia banned  exports from afflicted regions of these nations and Ukraine.,
441,000 tonnes of 2019 Polish chicken exports were shipped to non-EU nations. These bans will reduce Poland's non-EU exports to below 300,000 tonnes in 2020. Together with a impact of the ban on Hungarian supplies, that will cause a significant fall in EU chicken exports of up to 10%, from 2.49 million tonnes in 2019, down to just below their 2017 level of 2.3 million tonnes. On the other hand, with Polish poultry exports to EU nations holding steady, its overall poultry meat shipments should only fall 5.4% to around 1.3 million tonnes, compared to 1.48 million in 2019. 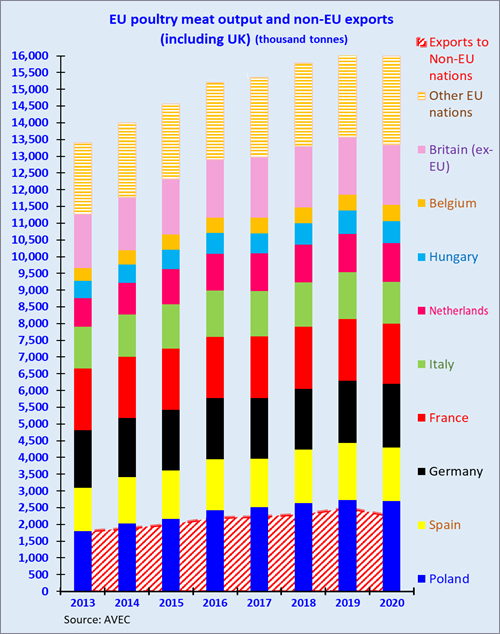 With nearly half of Spain's 190,000 tonnes of non-EU chicken exports going to recession-bound South Africa or sub-Saharan nations, Q1 2020 non-EU shipments were down 18% from 2019 levels. They are on-trend to fall by 21% or 40,000 tonnes this year, to 150,000 tonnes. Both Poland and Spain would have suffered even worse declines were it not for their diversion of some export losses to China's fast-growing market.
With the Continent's poultry consumption holding steady, EU poultry meat imports will fluctuate in their 830,000 to 850,000-tonne range of recent years. Leading the way in 2019 EU import market share were the UK (265,000 tonnes) and Brazil (225,000).
Exporting 237,000 tonnes to the EU in 2019, Thailand will boost its shipments to Britain and the EU above 2019 levels, replacing Brazil's COVID-19 constrained supplies. Moreover, with the EU closing a legal loophole that favored Ukrainian exports over Polish ones, its share of internal EU chicken imports will increase at Ukraine's expense, with the latter's 2020 exports at 400,000 tonnes, about 2% below 2019 levels. Hence, Polish non-EU export losses will be partly counterbalanced by higher shipments to European nations.
In tourism-dependent Spain and Italy, a steep drop in foreign arrivals will induce a USDA estimated 6% contraction in Spanish and Italian poultry meat output. Alongside rising domestic chicken demand, output constraints will prevent western European nations from boosting exports.
These include higher feed costs and stricter environmental laws in the Netherlands, high labor costs in France, and underinvestment in new modern production facilities in Germany. Thus, we expect Europe's poultry meat output to stay flat. Combined with a drop in Polish, Hungarian and Spanish exports, lower consumption in tourism-dependent nations will offset rising consumption in Eastern European EU members.