The Dry Grape Extract (Nor-Grape® 80) developed and commercialised by Nor-Feed, is now the first botanical sensory additive authorised for animal nutrition by the European Commission.

Nor-Grape 80 is increasingly used in aquaculture, providing various benefits such as improvement of zootechnical performance and better quality of aquaculture products.

1-   The benefits of active antioxidants present in grape extract

The Dry Grape Extract is rich and standardised in total polyphenols, procyanidins and anthocyanins, active molecules well known for their strong antioxidant potential. It is used worldwide to reduce oxidative stress which is the disbalance between antioxidants and free radicals. This phenomenon can be caused by many factors (water temperature, water quality, level of dissolved oxygen, stress…) and may have dramatic effects on the fish growth, health and the quality of its products. Its potential applications in aquaculture are numerous. In particular, grape polyphenols have been shown to have a protective effect on fish meat when added directly on it after slaughter (Pazos et al. 2005, Gai et al. 2015, Magsood et al. 2013).

A trial was set up in an experimental station in the south of France (CREUFOP, Montpellier) on sea bass (Dicentrarchuslabrax) to establish if such a protective effect would be observed on the meat when orally supplementing the fish (drip loss during storage and cooking, or oxidation state) and whether it would at the same time benefit the fish by improving its antioxidant defences.

Sea bass of 120 to 170-gram were divided in two homogeneous groups: a control group ("CTL"), fed a classic grower extruded feed (43% proteins, 20% fats), and a Dry Grape Extract group ("NG"), fed the same feed supplemented with 40ppm of Nor-Grape80. The fish were fed for 66 days, until slaughter.

-          Total glutathione peroxidase was measured on blood samples at slaughter.

The measure of total glutathione peroxidase on blood samples evidenced a significantly higher level (p<0,05) in sea bass supplemented with the Dry Grape Extract (Figure 1), demonstrating a beneficial effect of the grape extract on the stimulation of endogenous antioxidant defences. 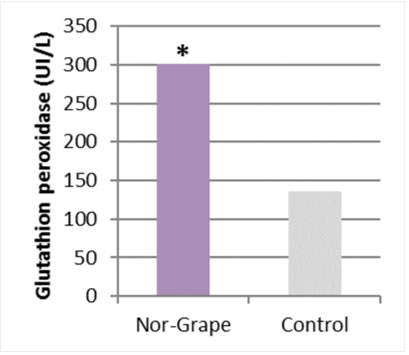 Furthermore, the improvement of the oxidative stability of the filets in the NG group resulted in a significant reduction of drip loss during cooking (-25%, p<0,01, Figure 2). 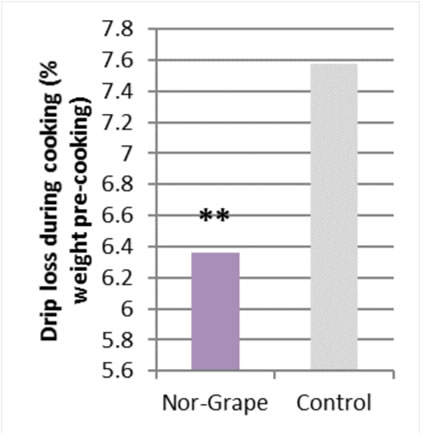 4-   Conclusion and other applications demonstrated

The supplementation of the diet with 40ppm of Nor-Grape 80 for 2 months before slaughter therefore increased the fish antioxidant defences. This resulted in an improved meat quality by improving the oxidative stability of the meat leading to a reduction of drip loss during the cooking process.

Other studies on the use of Dry Grape Extract in aquaculture have demonstrated similar improvements on the products' quality (meat, eggs) as well as growth performances improvement in several species (fish and crustaceans). This demonstrates the need for a combination of synergistic water- and fat-soluble antioxidants in aquaculture to better protect fish against oxidative stress. 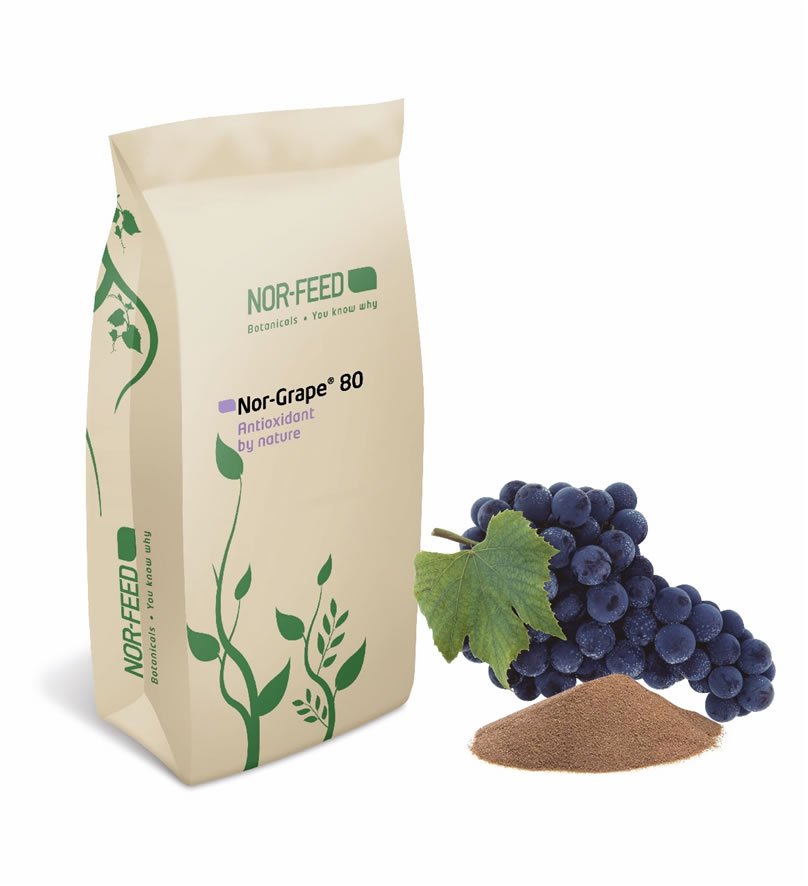 Video >
Technical Paper >
Influence of feed form and particle size on gizzard, intestinal morphology and intestinal microbiota composition of broiler chicken
Feed structure (particle size) and form (mash, pellets) play very important roles in ensuring the optimal utilization of nutrients by determining the level of feed intake. Modern m ...
Dietary fibre and intestinal health of monogastric animals
Animal performance, feed efficiency, and overall health are heavily dependent on gut health. Changes in animal production systems and feed regulations away from the use of antibiot ...
Driving enteric health through manipulation of intestinal microbial fermentation without supplementation of in-feed antimicrobial growth promoters
Consumer- and legislation-driven pressures to remove or reduce the use of antibiotics in monogastric animal production in Asia-pacific region has been increasing, and most of the c ...