The ultimate mission of dairy producers is to produce high quality milk, regardless of their milk volume goals. Somatic cell count (SCC) and protein content affect dairy product flavor, shelf life and cheese yield. And producers must keep contaminants such as aflatoxins out of milk to meet regulatory standards, market expectations and consumer trust.

Many factors affect milk quality, including weather, hygiene, animal genetics and product handling. Diet often plays a critical role as well. Deficiencies in energy or essential nutrients can hamper cows' resistance to mastitis pathogens. Maintaining the cow's immune system can help her ward off bacterial challenges that cause high SCC.

One management solution to consider for bolstering immunity is feeding CELMANAX™ to your lactating cows. The Refined Functional Carbohydrates™ (RFCs™) in CELMANAX support the immune system to help cows become more resilient against environmental challenges, including bacteria that impact milk quality. RFCs also optimize digestion and mitigate aflatoxins that can carry over in milk when cows eat contaminated feedstuffs. 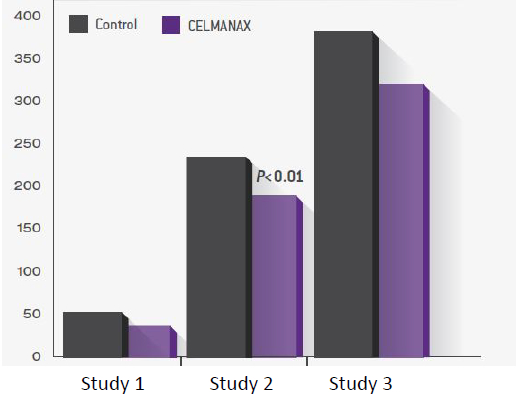 Another milk quality concern is potential carryover of aflatoxin in milk, caused by Aspergillus flavus fungus and related species of molds in feed. Although many types of mycotoxins occur commonly in feed, a specific concern for dairy feed is aflatoxin B1, which converts to the metabolite aflatoxin M1 during digestion. Aflatoxin M1 can then transfer to the cow's milk. At high levels, aflatoxin M1 is toxic to humans and animals.

It's important to know that thresholds limits for aflatoxin M1 in milk vary from country to country. For example, in Europe the maximum aflatoxin M1 content allowed in milk is 50 parts per trillion (ppt), while the U.S. maximum is 500 ppt. Milk with levels exceeding this amount must be discarded. If your lactating cows eat feed containing aflatoxins at 20 parts per billion (ppb) or greater, realize that their milk may exceed the tolerance levels for aflatoxins in milk.

Regardless of the tolerance levels in your region, it's important to consider the risk of aflatoxin contamination. The levels of feed contamination vary from year to year based on growing conditions, but mycotoxins are almost always present. A 10-year study of mycotoxins in feed, involving 72,821 samples from 100 countries, found that mycotoxin contamination is the rule rather than the exception.

In research4 at two dairy production sites affected by alflatoxins, feeding RFCs helped mitigate aflatoxins carried over in milk. Cows in the study consumed feed contaminated with about 10 ppb of alfatoxin B1. As a result, a significant number of them secreted aflatoxin M1 in their milk—more than 40 percent of the herd at one of the sites.

The study showed that supplementing rations with RFCs effectively blocked the transfer of aflatoxin M1 to the milk of cows fed the contaminated feed. Within three to seven days of starting on the feed additive, the cows in the study no longer secreted aflatoxin M1 into milk. (See Figure 2.) 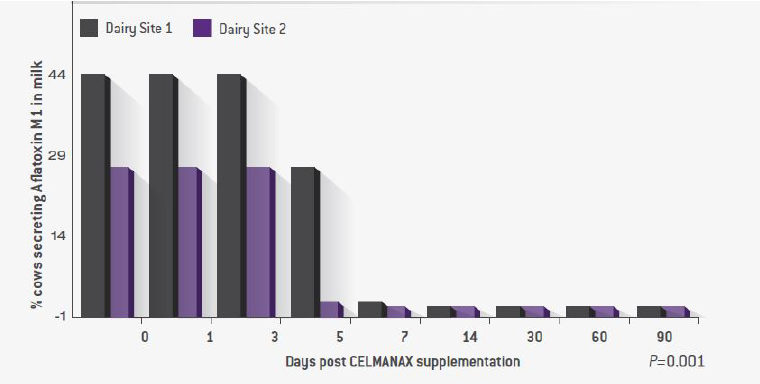 4 Baines D. Evaluation of prebiotics and probiotics to reduce toxicity of pure and mixed-feed mycotoxins in vitro and to prevent carry-over of aflatoxin B1 in dairy cows. Symposium on Gut health in Production of Food Animals; Abstracts 202-1 and 202-2. 2014

Article made possible through the contribution of Elliot Block, Ph.D. and Arm & Hammer Animal and Food Production
Video >
Technical Paper >
Mitigating mycotoxins in poultry
Mycotoxins are prevalent in nearly all feed grains worldwide. Produced by fungi in cereal grains, corn and corn byproducts such as distillers dried grains (DDGS), mycotoxins in fee ...
A wide overview on mycotoxin risk management
Effective management of mycotoxins is key for animal production, especially with the trends moving towards antibiotic reduction or even antibiotic free production. There are differ ...
Mycotoxins and biomarkers of exposure win the battle against mycotoxins
The difficulty in the mycotoxins detection in raw materials and feed, due to their heterogeneous distribution and their commonly low specific clinical manifestation, makes that man ...