Zhou succeeds Dr. Jiang Weiming, who has helmed DSM China since 2007. Dr. Jiang will continue to serve at DSM as special advisor to the Global Co-CEOs. 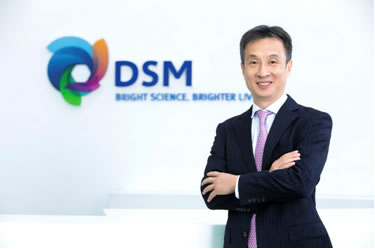 Zhou's responsibility includes driving DSM's growth in China, focusing on innovation and sustainability, and reinforcing a talent pool of capable and skilled workforce. He will also spearhead DSM's purpose-led, performance-driven strategy and align this with the sustainability goals of China's 13th Five-Year Plan, and the Healthy China 2030 blueprint.

Zhou joined DSM China in January 2020 and has since worked closely with Dr. Jiang to ensure a smooth transition, including spending time at DSM's headquarters in the Netherlands and deepening understanding of DSM's diversified portfolio of businesses.

Geraldine Matchett and Dimitri de Vreeze, co-CEOs of Royal DSM, said: "Joe Zhou's rich experience and successful track record running multinationals in this market make him the ideal person to lead DSM in China. He has all the strengths and capabilities to deliver on our commitment of creating a brighter world for all to the local market. We'd like to also express our sincere gratitude to Dr. Jiang Weiming for his extraordinary leadership and contributions over the last 13 years, which has laid a solid foundation for DSM's continued success under Joe's appointment."

Zhou brings a wealth of knowledge and business acumen from his previous roles, including 19 years with Alcatel Lucent in Australia and China. At those organsiations, he held various positions including commercial, operations, strategy, and general management roles. Zhou was instrumental in the establishment of a major joint venture, Alcatel Shanghai Bell, and continued to lead its successful international business unit.

Zhou said: "DSM is uniquely positioned in the market as a global leader of innovative and sustainable solutions that brighten people's daily lives through science. My priorities as China president will be to fulfill DSM China's commitment to innovation and sustainability, with purpose-led strategies to create value across the areas of "People, Planet and Profit" to all our stakeholders. I am equally committed to providing effective leadership that empowers our talent to realise our goals together."

Under Dr. Jiang's leadership, DSM China grew steadily and significantly increased its product portfolio, expanding its local footprint while deepening the company's commitment to sustainability. During the COVID-19 health crisis, the company also affirmed its commitment to China by actively supporting the frontline fight against the spread of the pandemic with its health and nutrition expertise.