Feeding the world's population is an ever-increasing challenge. It is expected that in 2023 the earth's 8 billionth citizen will be born. Supplying the population with sufficient food is a more pressing issue today than it has ever been, increasing the pressure on livestock producers to produce sufficient, safe protein sources for human consumption efficiently and sustainably. The use of antibiotic growth promoters had been once considered necessary by many proponents to ensure optimal animal health and growth or production efficiency. However, concerns about the linkage of antibiotic use in food animals to the development of drug resistance in pathogens in animals and, ultimately, in humans have prompted attempts to limit the use of antibiotics in animal production whenever feasible (National Academy USA, 1999), thus livestock production systems all over the world will have to cope without them. Much has been said and written about potential alternatives for the in-feed antibiotics. Scientists report that curbing the use of antibiotics in subtherapeutic disease prevention and growth promotion might offer the greatest opportunity to reduce the amount of antibiotics used in food animals. As such, experience has for instance shown that acidifiers are the most reliable product group of the non-antibiotic growth promoters available, as reported by Papatsiros and Billinis (2012). But all those attempts are directly focussing on the animal itself.

On the other hand, feeding a world with reduced antibiotic levels can also achieved by using the full potential of the already existing production systems, which is currently not done. Cutting the current level of food and feed waste, which represents up to 50% of the 4 billion tonnes of food production every year, according to the IMECHE-report (2013), may be another way to help us rise to the challenge.

Preservation - part of the solution

Feed or raw material wastage during storage happens world-wide, but differs in its nature and development due to climate conditions. While in a developed country such as Australia, wastage of up to 0.75% in grain is the maximum loss which may still be tolerated, whereas in Ghana up to 50% may be experienced. India and Pakistan on the other hand will lose annually 21 and 3.2 million tonnes of feed raw materials, respectively. In order to avoid such microbial losses, feed hygiene assurance is a fundamental issue. However, microorganisms are ubiquitous and total sterility cannot be achieved.

The application of organic acids in livestock nutrition and feed preservation has been known for decades and is documented by many scientific studies. Acidifiers make a fundamental contribution to feed hygiene, since they suppress the growth of mould and thus restrict the potential production and detrimental effects of mycotoxins as well as preventing contamination and nutrient losses by bacterial and mould growth in the feed. Furthermore, bacterial degradation of the feed is inhibited. Consequently, the feed's safety and animal health are guaranteed by adding organic acids, and can secure animal performance and safeguard overall economic animal production.

Organic acids are well known for inhibiting a broad spectrum of moulds, bacteria and yeasts. The efficacy of different organic acids for inhibiting microbial growth can be compared using their minimum inhibitory concentration (MIC, Table 1).

Propionic acid has a broad efficacy and is the most efficacious of the organic acids against fungi. On the other hand, formic acid is more efficacious against bacteria, while benzoic acid is highly effective against yeast. In feed legislation, these organic acids are registered as preservatives, but at higher inclusion levels in feed, their positive effects on animal health and performance are also well documented.

Even in a hygienic environment, feed can be infected to a certain degree with fungi, bacteria or yeast, with a typical recontamination pattern during the journey from the feed plant after pelleting to the farm silo (Figure 1), especially when no chemical stabilizer, such as an organic acid, is added. 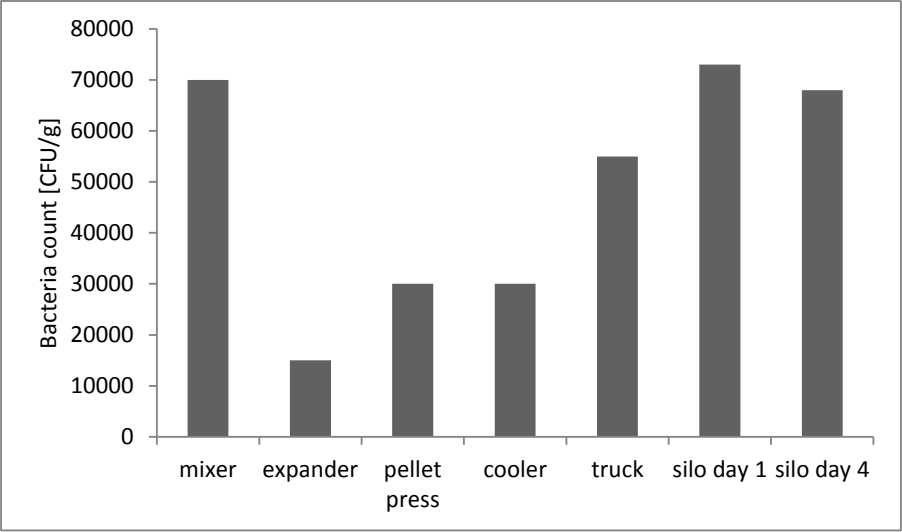 Figure 1: Recontamination pattern from a commercial feed mill to farm silo with bacteria without acidifier – modified after Peisker 2011

Successful preservative products need to guarantee the preservation and stabilisation of feed, while offering easy, user-friendly handling to the customer. This need formed the impetus behind the development of a non-corrosive premixture of propionic acid and its salt with benzoic acid (Kofa®Feed, ADDCON, hereafter referred to as NC-preservative).

A series of preservation trials were carried out under standardized conditions at the Chamber of Agriculture in Lower-Saxony, Germany. A number of commercially available compound feeds, obtained from pig and poultry farms, were used for the trials. The feed samples were blended with 10% cereal waste, to mimic natural microbial infection. The moisture content of the feed was kept at 15%. Prepared feed was treated with different concentrations (1, 3, 5 and 10 kg/t) of Kofa® Feed (premixture of propionic acid, sodium propionate, benzoic acid) and stored for 28 days under aerobic conditions in an incubator at ambient temperature (25°C), representative of the typical maximum length of storage of compound feed. Relative humidity was kept stable at 80%.

Results under challenge conditions (constantly high relative humidity, high moisture content of feed) as well as a high initial microbial contamination revealed that the NC preservative is able to inhibit the growth of spoilage indicating bacteria and moulds highly significantly (P<0.001), as well as that of yeast in poultry and pig feed.

Figure 2 shows the highly significant impact of the NC-preservative against yeast. Inclusion of 1 kg/t of the product resulted in a significant reduction of yeast by 98%, while the higher doses achieved a significant >7 log reduction (or a reduction by 100%) of yeast in the layer feed.

Figure 3:  Reduction in spoilage indicating moulds (log CFU/g) in pig feed stored with or without NC-preservative for 28 days (P<0.001)

The use of 1 kg/t NC-preservative resulted in a significant >3 log reduction (or a reduction by 99.95%) of moulds in the stored feed for fatteners (Figure 3).

Many experts consider mould counts of 106CFU/g as high, and expect a negative impact on the animal fed with such a feed (e.g. Manitoba Agriculture, Food and Rural Development). It has been shown in a wide range of trials that the combination of ingredients in Kofa Feed is able to have a significant impact at dosage levels between 1 and 3 kg/t against bacteria, moulds and yeast in compound feed for various species.

The control of feed hygiene is of eminent importance as it inhibits the loss of its nutritional value and prevents stress on the animals caused by large numbers of microbial contaminants. A wide range of trials under European conditions, have shown that the combination of ingredients in the NC-preservative is able to have a significant impact at dosage levels between 1 and 3 kg/t against bacteria, moulds and yeast in compound feed for pigs and poultry. As such, Kofa Feed plays a vital role in achieving a state of biosecurity. Since biosecurity techniques should be based on an understanding of pathogen transmission (National Academy USA, 1999), knowledge of all potential entry routes for pathogens to a herd is an essential prelude to developing a comprehensive biosecurity program. In this regard, eliminating the entry vector "feed" for pathogenic bacteria and moulds by using effective preservatives, is a key part of those programs in order to achieve a sustainable animal nutrition perspective with reduced usage of antibiotics.

For feed mills that prefer to use dry mould inhibitors, ADDCON also supplies a similar product in powder form (ADDCON XF Superfine), which, due to its small particle size, mixes as well as liquid products. This product contains the acid salts of the three most important organic acids with antimicrobial action – formic acid, propionic acid and benzoic acid.

Several trials conducted in Europe and Asia confirm the beneficial impact on feed hygiene in poultry and pigs. For example, in laying hens, the efficacy was established at a governmental institute in the Ukraine. The State Scientific Control Institute of Veterinary Medicinal Products tested the preservative under commercial conditions over a four month storage period. Feed containing 1.0 kg/t Addcon XF Superfine with a moisture content of 12% was stored at temperatures between 18 and 23°C. Microbial counts and feed quality parameters were measured and compared to negative controls. Initial microbial counts were in the range of 50,000 CFU/g for both groups, which is within the normal range for eastern European feed, according to a Polish study from 2013. After 120 days of storage, microbial count and crude protein level were measured. Final microbial count in the control group increased by a factor 10, while in the treated group, it remained within the same range. This increased microbial load resulted in a decrease in feed nutrient content, as measured be the crude protein content, which decreased in the controls from 15.2 to 14.9%, whereas it remained stable in the control group. This test showed that ADDCON XF Superfine is very effective in preserving layer feed during storage and maintaining its nutritional value at low dosages.

To ensure we can sustainably meet the food needs of the estimated over three billion extra people on the planet by 2075, initiatives need to be taken to reduce the substantial quantity of food wasted annually around the world. As reported by the Institution of Mechanical Engineers in the UK (IMECHE), a potential 60-100% more food could be provided by simply eliminating losses, while simultaneously freeing up land, energy and water resources for other uses. This is an opportunity that should not be ignored. Reduction of microbial spoilage during storage, which poses a major threat to feed- and therefore food security, due to the use of sustainable preservatives, such as organic acids, can easily be implemented as part of this strategy. Such management approaches which provide stringent control on feed hygiene and feed quality – like the use of feed preservatives, can be used to support the reduction of disease incidence and thus drug use in food-producing animals and should be therefore an indispensable part of any biosecurity- and antibiotic reduction system.