The use of antibiotics at sub-therapeutic levels, to improve the productivity of chickens has been practiced in many countries for decades despite its drawbacks. As a result, today we are seeing the emergence of multiple bacteria that are resistant to many of the commonly used antibiotics. This is also a direct threat to human health as many of these multi-drug resistant bacteria contaminate the meat and are passed on to the human population.

In addition, the pace of development of new antibiotics is slowing down alarmingly due to high R&D costs and marketing uncertainty.

According to the Centers for Disease Control and Prevention, USA, report, every year two million Americans are exposed to antibiotic resistant bacteria and 23,000 of them die as a result. Not much data on this is available in developing countries, but what data we do have is alarming!

Campylobacter jejuni is the most common cause of diarrhoea cases (13.5%) in children in India. Ciprofloxacin – a drug from the quinolone class of antibiotics was once the drug of choice to treat the infection. Unfortunately, today the bacterium is completely resistant to this drug. Another study, on risk factors for antibiotic-resistant E. coli in children in a rural part of the southern state of Tamil Nadu, India, suggests that children living in proximity to poultry farms may be at higher risk for carrying strains resistant to fluoroquinolones, tetracycline, and gentamicin.

These few examples are quite scary and good enough to stress the necessity to move away from the indiscriminate use of antibiotics in animal farming and look for more sustainable alternatives. Antibiotics need to be used only during serious disease outbreaks, while following all mandatory requirements.

Organic acids are looked upon as the most promising alternative to the antibiotics (Papatsiros and Billinis, 2012), as in addition to its antimicrobial property, organic acids provide many extra benefits such as improving the intestinal health, optimising the intestinal pH and thereby improving the nutrient digestibility. Organic acid controls the development and growth of mould and bacteria by the virtue of its inherent antimicrobial property and are in use as a preservative in food industry since ages. Since half-a-century they also have been used in the animal industry.

There are many additional advantages of using an organic acid in the diet over the use of antibiotics. A big advantage of organic acids is for instance that the lactic acid producing bacteria generally grow at a relatively lower pH and hence are not affected much. Thus, organic acids control pathogenic bacteria and support the beneficial bacteria.

Numerous studies support the theory that organic acids also help in improving the digestibility of the feed by virtue of improvements in digestive enzyme activity, microbial phytase activity, and increased pancreatic secretion etc. As a result, they not only improve nutrient retention in the animal, but reduce nutrient induced pollution of the environment by for example, phosphorus and nitrogen. Though it is now established that the use of organic acids is a suitable and sustainable alternative to antibiotic usage, there seems to be a lack of information within the farming community in developing countries about the levels of inclusion in the diet. Hence sometimes we see a lack of consistency in the results. The inconsistency in the results is mainly attributed to the buffering capacity of the ingredients in the diet and the inclusion levels of the acids. The ingredients that contribute most to the buffering capacity are protein and minerals.

Organic acids lower the buffering capacity of the diet, thereby leading to better acidification of the feed in the upper gastrointestinal tract, which is important for better enzymatic (pepsin) activity. Hence the type of ingredients, feed formulations and the inclusion levels of the organic acids are very important to achieve consistent results.

Several different organic acids are being used in poultry production. Each organic acid has its own spectrum and potential. The antimicrobial effect of organic acids increases with increasing concentrations and is also influenced by the molecular structure of the acid.

A MIC (Minimal Inhibitory Concentration) study done by Strauss and Hayler in 2001 can be a good tool to evaluate the proper inclusion levels for various organic acids to be used in feed (Table 1). This study shows that formic acid is the most potent organic acid in the control of a wide range of pathogenic bacteria with importance to human and animal health, with the lowest MIC levels compared to other acids, like propionic and lactic acid. 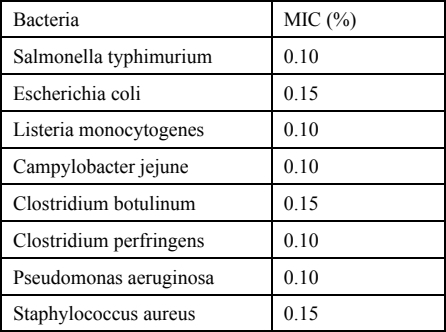 Apart from the inclusion levels of the acids, another important influencing factor is the quantity of the supplemented acid that reaches the lower intestine, as this is the region where the chances of multiplication of pathogenic bacteria are highest due to conducive pH and nutrient availability.

Studies done by Maribo et al. (2000) and Kirsch (2010) have shown that, despite formic acid being the strongest antibacterial, the amount of supplemented acid that reaches the small intestine is barely 4-5%. This corroborates with a study done by Thompson and Hinton (1997) which showed that even with the addition of a combination of formic and propionic acid in high concentrations to the feed, these acids could only be recovered from the crop and gizzard. This clearly indicates that control of pathogenic bacteria in the lower intestine is difficult in practice, when using the commonly available forms of organic acids.

Quite encouraging data is available on the other hand on the diformates - the double salt of formic acid (one molecule of mineral and two molecules of formic acid/formate, traded as Formi NDF), which shows about 85% of the formic acid enters the small intestine when used in diformate form (Figure 1).

As the amount of formic acid reaching the small intestine (SI) is quite high, one can see well documented results with diformates at much lesser dosage as compared to the single salts.

Figure 2: Effect of sodium diformate (traded as Formi NDF) on gut microflora in poultry (after Lückstädt and Theobald, 2009)

The availability of higher amounts of active ingredients in the gut will have an influence on the overall gut microflora. Such a study (Figure 2) showed that the number of pathogenic bacteria in poultry has been lowered by about 99% whereas the number of beneficial bacteria is improved by one log (Lückstädt and Theobald, 2009).

A university trial with broilers in Vietnam (Lückstädt et al., 2012) has also shown significant improvement on the litter quality, completely agreeing to the above-mentioned results. The E.  coli number in the faeces were reduced by 96-97% (Figure 3) and showed similar or even better results compared to the use of an AGP. This observation is more interesting as we can safely hypothesise that using the diformate will help to reduce the contamination level in the farm, thereby improving overall hygiene and reducing disease incidence. 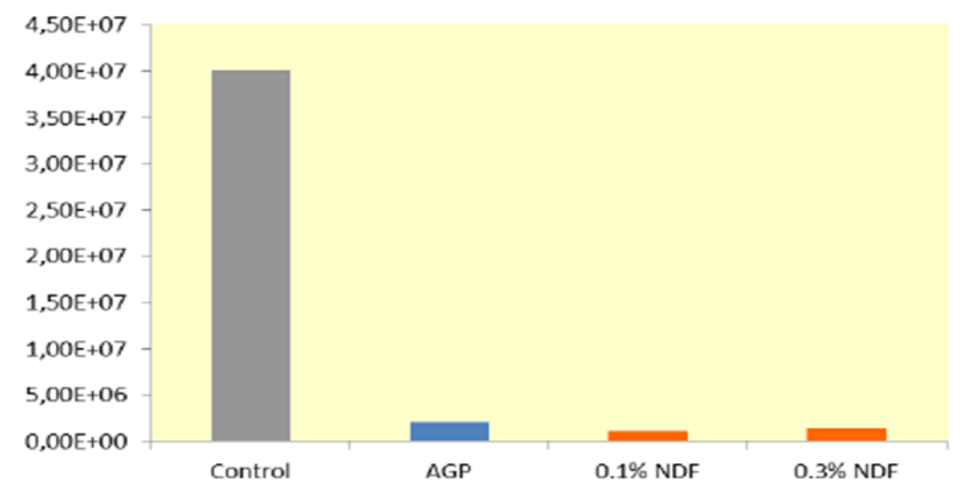 Latest data from India report a reduction of the total Coliform count in layer and broiler breeder faeces by more than 98% after usage of Formi NDF at 1 kg/t for at least 25 days.

Thus, there is sufficient data to safely say that sodium diformate does have a better activity than the commonly available acidifier products as well as antibiotic feed supplements. This can be attributed mainly to the high formic acid content in the molecule and the double salt form in which the molecule is delivered. And it explains why, in the case of diformates, consistent results are reported under both research and commercial conditions. This approach will further help the different antibiotic reduction initiatives present in the region, thus ensuring sustainable animal nutrition for future generations – who can then still live with functional antibiotics used in human medicine.

Article made possible through the contribution of Christian Lückstädt, Anant Deshpande and ADDCON