June 15, 2020
Asia to dominate world egg market through 2050
Decelerating growth in China and Northeast Asia is being more than offset by rapid expansion in Southeast Asia and the Indian subcontinent.
By Eric J. Brooks
An eFeedLink Hot Topic 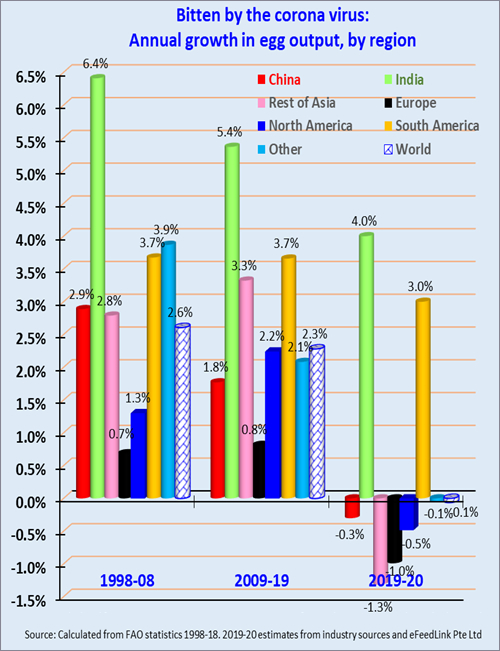 Asia dominates world egg production: Its share of world egg production increased from 58.9% in 1998 to 62.9% last year.  Within Asia itself, Chinese dominance is gradually giving way to co-dominance shared with India.
At this time, China's 2019 output of 33.1 million tonnes account for 38.8% of the world's eggs. It produces five times more eggs than second-ranked America (6.67 million tonnes) and six times more than third-ranked India (5.45 million tonnes). China, in fact, exceeds the combined egg production of the next nine biggest producers.
On one hand, as China gets wealthier, it will spend most of their additional income on higher-priced red meats. Consequently, from above-trend 2.9% annual output growth in the ten years to 2008, Chinese egg production increased at a below-trend 1.8% annual rate since 2009.
On the other hand, India has seen egg output rise by 6.4% yearly in the 2000s, 5.4% annually after 2009 and is expected to see 3% growth even in this coronavirus impacted year. With a population of 1.3 billion, per capita income well below $10,000, per capita egg consumption of 3.7kg and religious restrictions on meat consumption, India's fast-growing egg market will one day rival that of China or even exceed it.
We project Indian egg consumption poised to expand 5% annually over the next decade, it will overtake the output of second-ranked US and total 9.2 million tonnes by 2030. India's fast-expanding market is complemented by similar rapid egg consumption growth in neighboring Pakistan, Bangladesh, Bhutan, and Nepal. In all, South Asia is a market of 1.8 billion consumers across five nations that have average per capita consumption below 5kg and decades of 4% to 6% annual consumption growth ahead of it.
Alongside India, over 625 million of Southeast Asia's 665 million people combine per capita incomes in the US$2,000 to US$9,000 range with per capita consumption that averages approximately 6kg. Within ASEAN, only low population Brunei (population 0.5million), Singapore (5 million), and Malaysia (32 million) have high, wealthy nation egg consumption levels.  At 21.3kg, tiny Singapore's per capita egg consumption is third-highest, after Mexico and China.
In the other 95% of Southeast Asia, per capita egg consumption ranges from approximately 2kg in Cambodia (population 16 million) and Laos (8 million) to 4kg in Vietnam (97 million) and Philippines (109 million) to 6kg in Indonesia (270 million) and Myanmar (55 million) and 13kg per capita in Thailand (70 million).
Combining very low per capita consumption levels comparable to those of India with 3.5% to 6% annual consumption growth, these nations are far more open to trade than the Indian subcontinent. Consequently, while Southeast Asia has only a third or South Asia's population, from a foreign investor's perspective, it offers more profitable growth potential.
Latin America is the only market to rival Southeast Asian continent in growth potential. One day far in the future, Africa will take over from Asia as the world layer sector's growth frontier. But for now until the middle of the 21 century, Asia will be both the main market and growth center for all things eggs related.
With the rapid growth in markets like India, Indonesia and Myanmar offsetting decelerating expansion in China, Japan, Malaysia, and South Korea, Asia will continue to account for roughly 60% of egg production into the foreseeable future –but other markets are also growing rapidly, or preparing to start doing so.