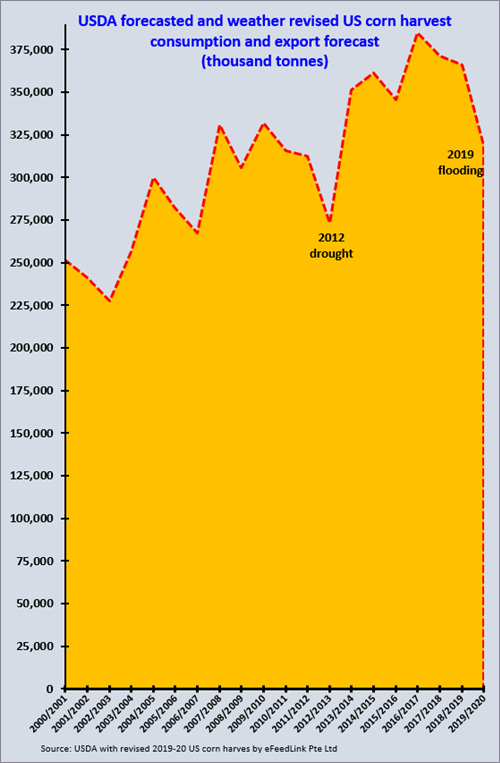 Being a conservative organization, the June USDA WASDE report's US feed crop estimates are badly trailing ground-level realities. This is actually good news if you are a bullish corn buyer or speculator: Even though corn prices increased after the report, they did so by less than they should have: Conservative official estimates are keeping corn prices softer than they should be for at least another month or two.
In our last feed crop report in late May, I forecast "The crop yield will be 167bushels (4.24 tonnes/acre) on the 55 million acres already planted and 154 bushels/acre (3.91 tonnes/acre) on the 20 to 25 million acres that will eventually be planted with corn." –which gives an overall yield estimate of around 163bushels/acre.
The analyst community was more optimistic on crop yields: Before this week's USDA WASDE report, a Reuters' analyst survey showed they expected the USDA to slash this year's corn crop yield to 172.4bushels/acre. –The USDA actually slashed its yield estimate to 166bushels/acre. Unless perfect corn growing weather follows without an early frost, I am confident the USDA will slash its final corn crop yield estimate to 163bushels/acre –and most likely even lower.
Amid rain-drenched fields and with just 83% (or 74 million acres) of estimated crop acreage planted as of June 10 (versus the average of 99% for this time of year), the USDA cut its American corn harvest estimate 9%, from 381.8 million tonnes down to 347.5 million tonnes. It did so in two ways.
Alongside slashing its corn yield by 5.7%, from 176 bushels/acre to 166/bushels/acre, it reduced its estimated corn planted area to 89.8 million acres. We believe that both these revisions are too conservative.
First, the analyst community anticipated USDA corn planted acreage of 86.7 million tonnes. We assume a lower acreage of 85 million tonnes, which is higher than our initial 75 to 80 million acre estimate. –This concedes that corn's recent rally and improving weather conditions motivated a larger corn planted acreage than we anticipated, though not as high as USDA or average analyst estimates. 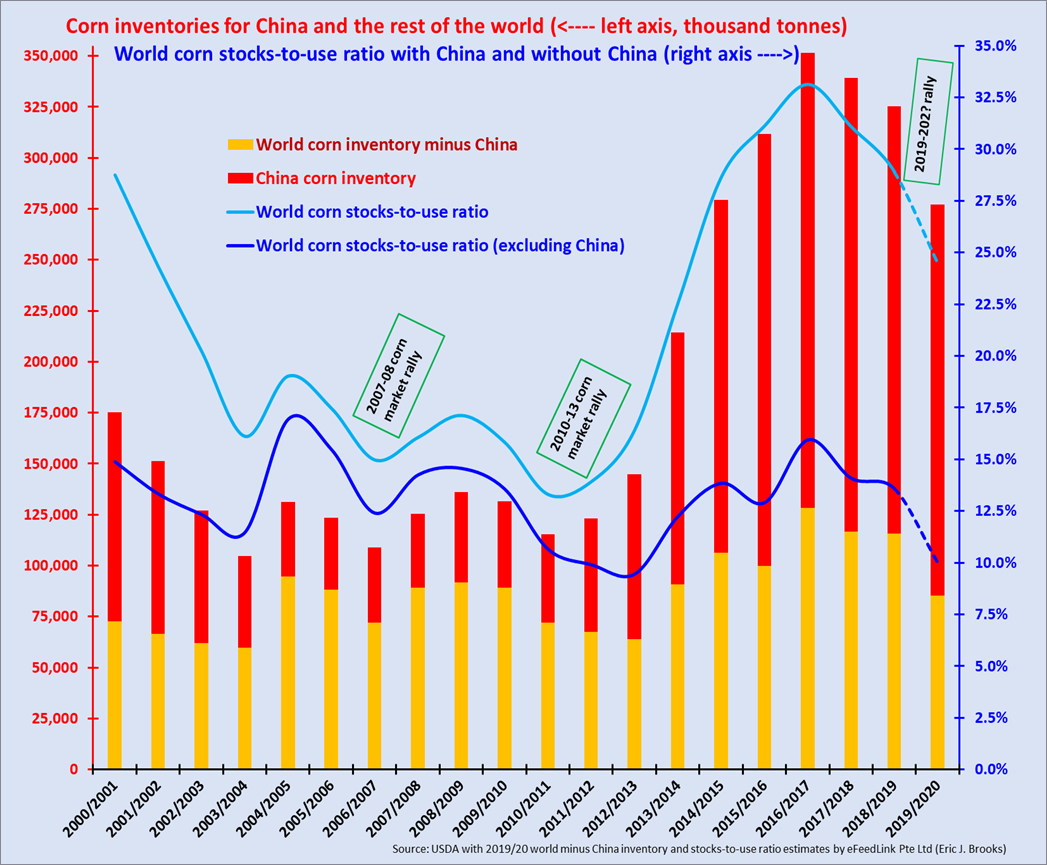 Second, there's a process at work that partially counteracts the impact of extra acreage After the start of June, corn yields drop steeply in inverse proportion to their planting date: The later the corn is planted, the more its crop yield will suffer. 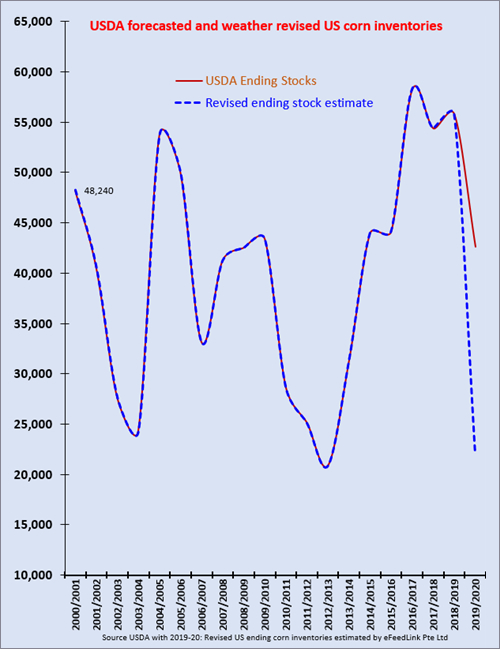 On one hand, we keep our corn yield estimate for the first 55 million acres planted before late May constant at 167bushels/acre.  On the other hand, our previous report assumed a 154bushel/acre yield on 20 to 25 million corn acres planted in June –and an overall corn yield of 163bushels/acre.
We now assume that 30 million acres will be planted with corn in June (and 85 million acres total), but their yield will only be 150bushels/acre –and this will drag this year's average corn yield to 161bushels/acre –and this  year's expected US harvest to just 319 million tonnes –far less than even the revised 347.5 million tonne USDA estimate.
This would be the smallest US corn crop since 2012's drought-shriveled 273 million tonnes and has bullish medium-term market implications. Even based on the USDA's more optimistic 347.5 million harvest estimate, US livestock farmers were expected to use 7.8 million tonnes of corn less than last year.
Based on our more pessimistic corn supply forecast, we expect the USDA American feed corn estimate to be slashed by another 5 million tonnes, to around 12 to 13 million tonnes below last year's level. Due to high world corn demand, US corn exports will only fall marginally, from 55.8 million tonnes last year to 54.6 million tonnes this year. Consequently, corn inventories will be run down to make up for this year's poor harvest –and that will have profound price implications
Whereas USDA figures project American closing corn inventories to fall from 55.81 million tonnes (and 15.2% stocks-to-use ratio) to 42.6 million tonnes (and 11.8% stocks-to-use ratio), that is too conservative for a harvest set to come in more than 27 million tonnes below current USDA estimates.
Based on our 319 million tonne harvest estimate and 12 million tonne reduction in feed corn use, America's closing 2019-20 corn inventories would be reduced to a skimpy 22 million tonnes and a US stocks-to-use ratio in the 7% to 8% range.
Even this conservative USDA report impacts world corn supplies –but the worst is yet to come. Initially, the USDA expected world corn inventories (excluding China) to jump from 115 million tonnes to 122 million tonnes. The current USDA report slashes world corn inventory to 98.6 million tonnes. This is the third consecutive fall in corn inventories and makes for a world (excluding China) stocks-to-use ratio of 11.5% --but even this is based on overly optimistic USDA supply forecasts.
Based on our more realistic corn yield and planted acreage estimates, the fall in US corn inventories will only be partly counterbalanced by larger Brazilian and Argentine harvests. World non-China inventories are likely to fall to around 85 million tonnes, and the stocks-to-use ratio near the inflationary 10% level.
Over the longer-term, we are now well into the first chapter of a multi-year bull market. Corn's impending H2 2019 foray into the US$5.00/bushel to US$6.00/bushel range will be the first of several peaks followed by retreats and new advances. The market will only enter a late, inflationary phase with new price records after China exhausts its corn inventories sometime in the early 2020s –and this could coincide with India becoming a major world market buyer of corn, soya beans or both.
For now, many of these supply-side adjustments will be made in two phases. First, in late June the USDA will adjust actual corn planted acreage based on on a ground-level, more realistic survey. Second, while important corn crop yield adjustments start in July, this crop's late planting mean that price-moving crop yield changes will more likely be made official in August or even September.
Indeed, several weeks of good June growing weather could even see a deflationary upward revision in corn yields during July followed by a dip towards 160bushel/acre levels in August or September. Any other outcome assumes that after extremely late corn planting, several months of ideal growing weather will coincide with a late Fall frost in northern corn belt regions. Such coincidences are always possible, but not likely to occur.
Hence, given the USDA's tendency to over-estimate crop sizes early on and the realities of late June planting, it appears that American farm statistics have done buyers a favor. Even though corn's price jumped to US$4.30/bushel on the latest report, its conservative estimates will prevent corn from going into the US$5.00/bushel to US$6.00/bushel range until Q3 is well underway. Consider this your last corn buying opportunity before the market roller coaster gets volatile –in an upward direction.