June 11, 2019
China revives the world poultry trade - but for how long?
After years of disappointing growth and losing the Russian market, 233,000 tonnes of 2019's 343,000-tonne increase in world chicken imports is due to China's ASF epidemic. This short-term import surge cannot make up for a post-2010 deceleration in emerging African and Middle Eastern markets.
By Eric J. Brooks
An eFeedLink Hot Topic 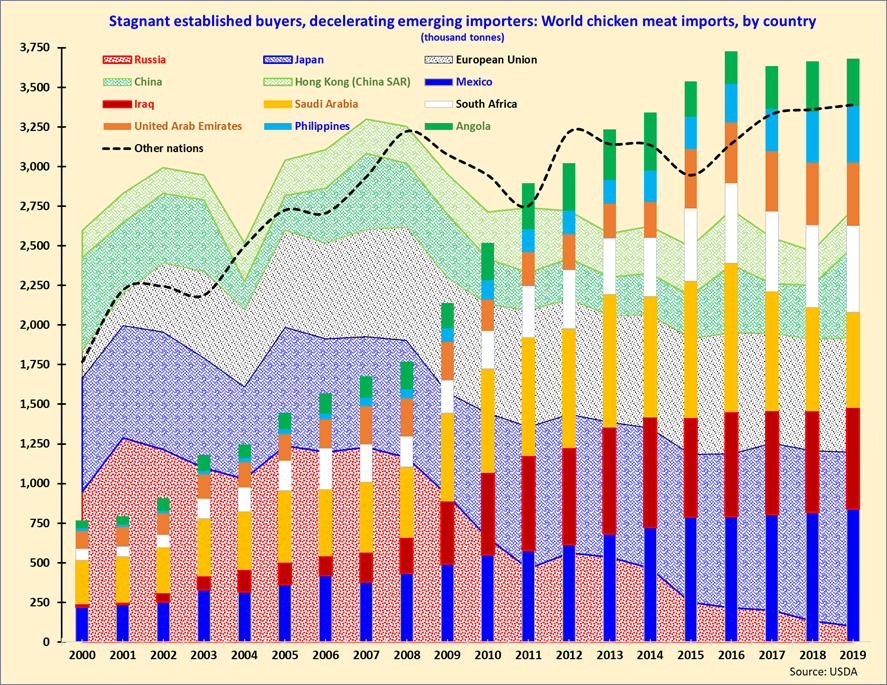 Having endured a decade of disappointing growth, trade restrictions and disease-related misfortunes, the world poultry trade's 2019 recovery is riding on the disease-plagued swine sector's coattails. It is a wonderful medium-term stimulant but does not address longer-term issues. 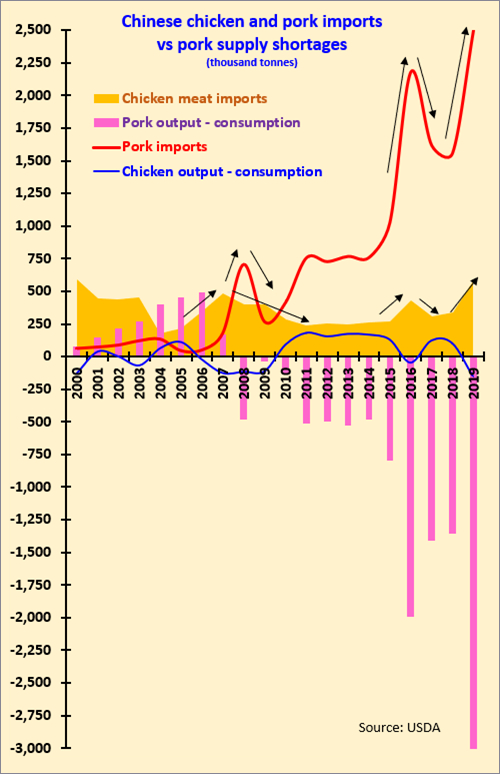 On one hand, the early 2000s Russian, Japanese and EU stranglehold over world chicken imports has given way to a diversified group of Middle Eastern and African nations, which collectively now buy twice as much poultry meat as Japan and Europe put together. The chicken import volumes of these nations overtook those of traditional large importers in 2011, but stopped growing rapidly after 2015.
In fact, our world poultry meat import graph shows that the collective poultry meat imports of traditional large importers (Russia, Japan, EU, China) have actually fallen by more than 15% since 2006 –and even the new boom in Chinese chicken import volume doesn't change this: Almost all growth in poultry meat imports is now happening in the Middle East and Africa.
On the other hand, as the cheapest, most feed efficient and supposedly healthy protein line, the world chicken trade was supposed to lead all others in growth –and it did, at least until recently. In the 1990s world chicken meat imports increased a USDA estimated 8.1% annually.
From 2000 through 2009, this fell to a still healthy 6.3% annual rate from 2000 through 2009 inclusive. –But from 2010 through 2018 (before ASF spread to China), world chicken imports only increased 2.7% annually, compared to 3.1% for beef imports and 3.8% for pork imports respectively.
Moreover, the years since 2015 were even worse, with imports rising an average of 2.3% from 2015 through 2018 inclusive. Depending on which estimates you take, 2018 saw world poultry imports rise a nominal USDA estimated 0.5% or fall by a Rabobank 2%. In both cases, they were below their 2016 peak level –but good news has finally come.
For 2019, the USDA expects world poultry imports to increase by 3.7% or 343,000 tonnes to a record 9.698 million tonnes. The real question is whether the rapid trade poultry trade increases once taken for granted can be sustained over the long-term or merely due to exceptional one-off events. On the basis of our analysis, the latter seems more likely –though the long-term forecast is gradually turning upward too.
How much has ASF boosted the world chicken trade? Two-thirds or 233,000 tonnes of 2019's 343,000-tonne increase in world chicken meat imports is due to China's African Swine Fever (ASF) epidemic. It is inducing a massive, 8.1% increase in Chinese chicken production –and even larger 10.4% increase in broiler meat consumption. As a result, Chinese chicken imports are rising a whopping 68%, from 342,000 in 2018 to 575,000 tonnes this year. 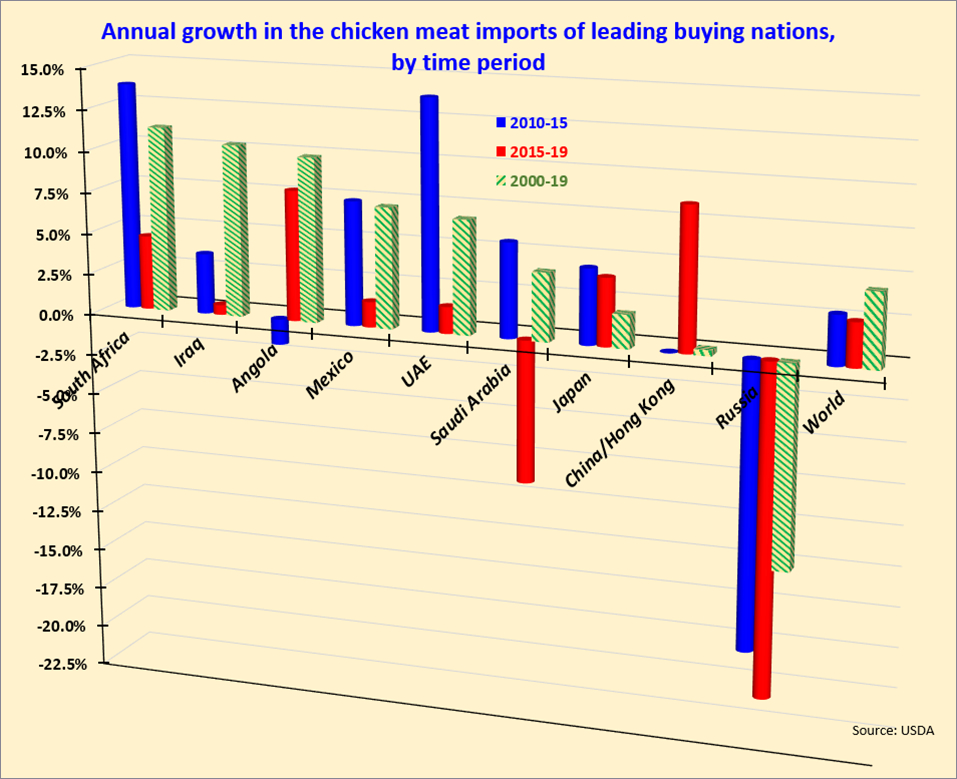