Strong gut health plays a vital role in reducing disease incidence and achieving optimal broiler performance and farm results. While antibiotic growth promoters (AGPs) have been widely used in flocks, more and more bans on the use of AGP's and growing concerns about antimicrobial resistance are driving a strong need for gut health supporting feed additives.

Trouw Nutrition conducts ongoing research on how the use of feed additives can help modulate the microbial gut communities in livestock. Alkyl esters present an interesting approach. Alkyl esters of lauric acid have proven their value in achieving efficacy in lower parts of the small intestine. Recent data have reconfirmed the added value of alkyl esters of medium chain fatty acids (MCFA) compared to free MCFA and triglycerides.

Gram positive bacteria such as Clostridium and Streptococcus are susceptible to the action of compounds interfering with the cell membrane structure. MCFA damage cytoplasmic structures and causes segregation of the inner and outer membrane, resulting in more effective reduction of growth of these bacterial species compared to compounds with shorter chain lengths.

Screening tests have shown that MCFA are effective in reducing Gram positive bacteria growth. The hypothesis is that MCFA destabilise the cell wall of Gram positive bacteria because of the higher lipid content. The antibacterial mode of action for medium chain fatty acids has been described in different ways. Adsorption of free MCFAs onto the bacterial cell surface, destruction of the proton motive force across the cell membrane, surface-activity effects on the cell membrane and fatty acid-induced cellular lysis have been mentioned to explain their anti-microbial activity mechanism.

An alkyl ester is a chemical compound derived from an acid in which at least one hydroxyl group is replaced by an alkoxy group. During digestion, lipid molecules are broken down into smaller particles by pancreatic lipase. However, since the structure of alkyl esters is different compared to the standard dietary lipids (triglycerides), hydrolysis of alkyl esters by pancreatic lipase is 10-50 times slower compared to triglycerides. As such, the alkyl fatty acids can escape quick digestion in the upper regions of the small intestine. Consequently, the amount of ‘free' lauric acid is higher in the lower parts of the small intestine and thus can display a stronger antibacterial effect in these parts of the intestinal tract. The jejunum is usually the site with the most intensive absorption of nutrients. Multiple scientific studies have shown that alkyl esters present a significant impact on the amounts of lauric acid in chyme content of the jejunum compared to the ‘free' form of lauric acid. Levels of monoglycerides are lower in all gut segments compared to ‘free' C12 and alkyl ester C12 (Figure 1). 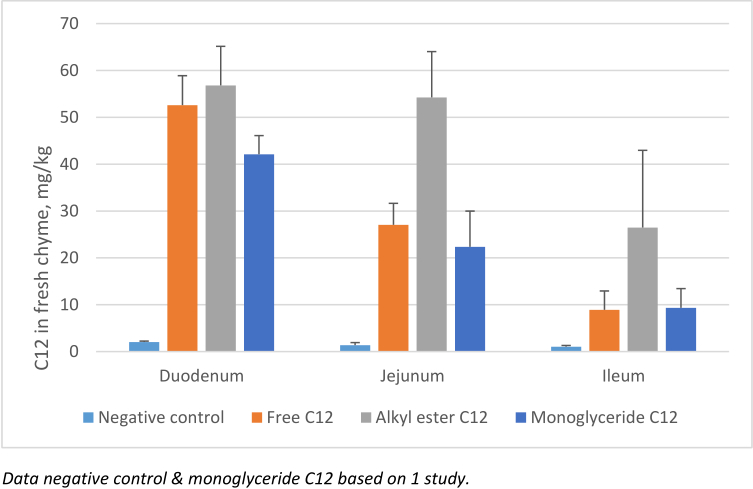 The level of intestinal microbial activity affects animal growth efficiency. The microbial community in the gut competes for nutrition with the host. Furthermore, the undigested protein of feed origin, endogenous protein and microbial proteins which bypass the small intestine are available for the microbiota in the caecum. Toxic metabolites produced during this fermentation can impact intestinal cell turnover and even growth performance. Additionally, microbiota accelerate turnover rates of enterocytes and goblet cells such that the high cell turnover is accompanied by extremely high rates of metabolism and protein synthesis. This results in higher populations of immature cells that are less efficient in absorbing nutrients. Furthermore, intestinal microbes decrease fat digestibility by deconjugating bile acids.

Catabolism of bile acids in the gut causes a decrease in lipid absorption and produces toxic products that inhibit growth of chicken. The reduction in microbial activity in the intestine is the suggested physiological process through which antibiotic growth promoters improve animal performance. Unlike free MCFA, which are utilized in the stomach and duodenum, alkyl fatty acids can reach the further parts of the small intestine, directly benefiting the microbiota and host tissues in that region. An in vivo study executed in Spain compared microbiota of female broilers fed either a negative control, C12 or alkyl ester C12 diet. The total bacterial count in the jejunum for broilers fed the alkyl ester C12 diet was significantly (p < 0.05) reduced after 21 days.

Next to the total microbial counts, diversity and stability of the microbial community is related with better feed conversion ratio in healthy and challenged broilers. Higher diversity of microbial genera has been associated with higher resistance and better production performance in broilers and other species. The above is possibly associated with the different roles that gut microbiota plays in the gastrointestinal tract. Specific bacterial genera are known to each have specific role in the gastrointestinal tract such as the generation of specific compounds which have multiple effects on digestive processes and gut integrity, development of host-defense mechanisms and resistance against pathogen colonization by blocking attachment via competitive exclusion. For these reasons, maintaining a high microbiota diversity is important. A reliable way to display the structure of a microbial community is through phylogenetic visualization, which shows the number of specific bacterial genera in a sample. The phylogenetic representation of jejunal samples from broilers at 21 days of age showed that alkyl esters help to increase diversity, as estimated by the number of different bacterial genera identified in jejunum content samples, by 22% (Figure 2).

Figure 2  Pyrosequencing microbial community profile in jejunum of broilers subjected to diets with and without alkyl esters at 21 days of age. (source: NIZO Food research). 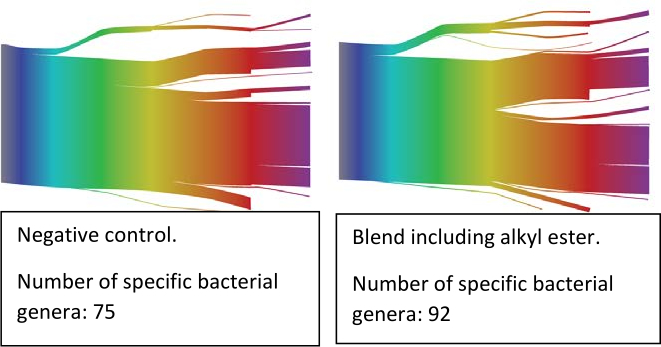 Both triglycerides and free MCFAs are absorbed mainly in the duodenum; and for some bacterial species, like Clostridia, the jejunum and ileum are the primary absorption site. A tendency (p = 0.079) to reduce Clostridium perfringens, a gram-positive bacterium causing gut health issues and reduced performance in poultry, in jejunum was found when alkyl esters of lauric acid were added to the diet (Figure 3). 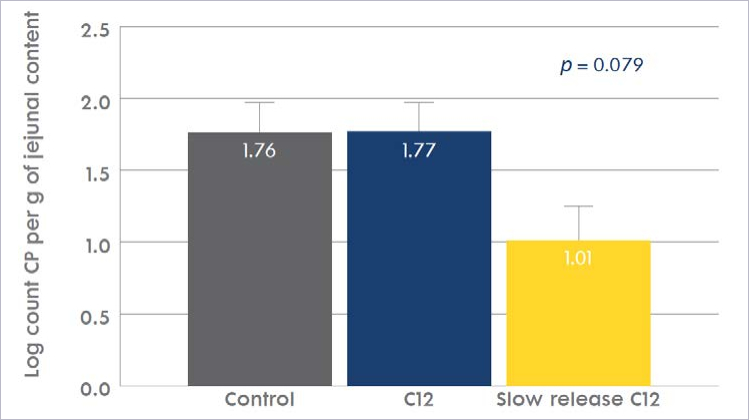 Internal studies have shown that the addition of alkyl esters of C12 to broiler diets are able to significantly increase performance parameters. The results of a 42-day broiler study indicated that alkyl esters of C12 may have beneficial effects on young broiler performance, especially on the digestive process, leading to over 2% lower FCR in the first 3 weeks of age (p = 0.01) (Figure 4). In a re-used litter challenge study, final body weight at 42 days of broilers fed a diet including alkyl esters tended to be higher compared to a negative control diet (Figure 5). 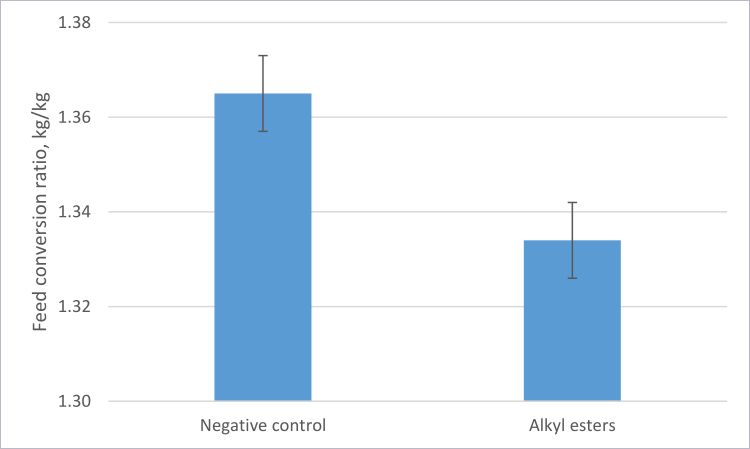 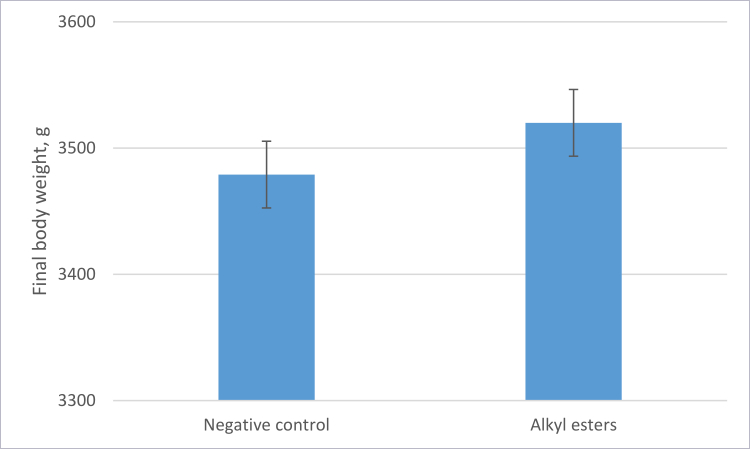 Alkyl esters of MCFA's reach lower parts of the gastrointestinal tract compared to free MCFA and triglycerides. This results in improved microbial diversity and lower microbiota counts which is reflected in improvements in zootechnical broiler performance. Based on this strong mode of action and performance results patented alkyl esters of MCFAs are included in Trouw Nutrition Gut Health feed additives, in combination with other ingredients to achieve multiple mode of actions for optimal gut health support.