May 29, 2019
The Rain & The Damage Done: Estimating the impact of America's flood-drenched corn fields
Official USDA corn harvest numbers have been washed out by this year's incessant rainfall. We give you an early quantitative assessment of the impact on world corn supplies, demand and prices.
By Eric J. Brooks
An eFeedLink Hot Topic 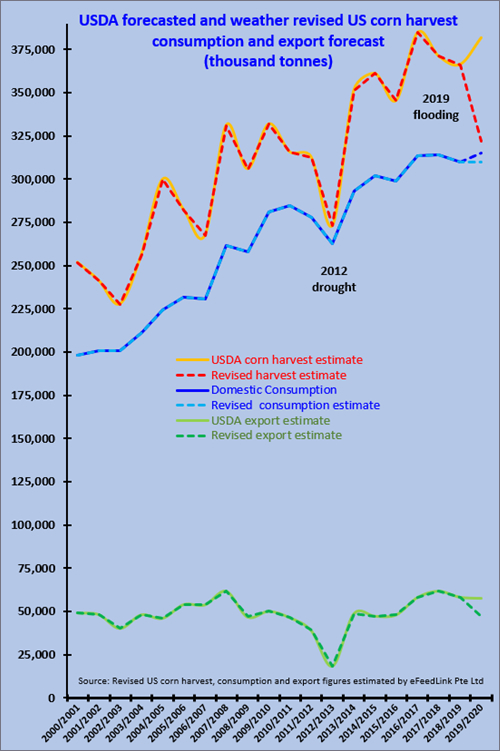 While oilseeds continue to languish in oversupply, feed grains appear to be on the cusp of a highly inflationary uptrend. Corn reserves entered a downtrend two years ago and prices were initially expected to trend upwards around 2020-21. Highly unusual US crop growing weather appears to be pulling this timetable forward by a year. America's Midwest is coming off the wettest 12 months on record, with major implications for both this year's corn harvest and world markets.
A month ago at the start of America's crop growing season, the USDA forecast a 381.8 million tonne US harvest, 315 million tonnes of domestic corn consumption and 57.8 million tonnes of exports, with inventories increasing from last year's 53 million tonnes to 63 million tonnes this year –this forecast now reads like fiction amid great uncertainty about what the actual figures will be.
Markets have already responded to the situation: CBOT Corn was selling for US$3.50/bushel less than a month ago but increased 20% in price, closing at US$4.20/bushel as of May 28. We try to make reasonable long-term estimates that may not necessarily be reflected in next month's USDA report revisions.
For the US as a whole, as of May 26, only 58% of acres intended for corn growing had been planted, compared to the 90% norm for that time of year.
On May 28, the website Seeking Alpha reported, "Illinois had 95% of its corn and 79% of its soybeans in the ground at this time last year. This year it has planted only 24% of its corn and 9% of its soybeans. Indiana had planted 86% of its corn and 70% of its soybeans this time last year. This year's plantings are 14% and 6%, respectively. Ohio had 69% of its corn and 40% of its soybeans in the ground last year. This year it has 9% and 4%, respectively.
Just as meteorologists had predicted, May is ending on a rainy note, with abnormally high precipitation expected to continue into the first week of June. Even without current, ongoing rainfall that is scheduled to persist for another ten days, large portions of Midwestern farmland are too water saturated to commence the mechanized planting of corn and soybeans.
They may remain in this condition until mid-June or later. By that time the northern half of the Midwest's corn-growing window will have closed and even the southern plains' growing season will have been significantly shortened.
In places where crops are planted, if unusually wet soil conditions persist, yields will be significantly below normal levels. Even if the land dries up enough to enable near-normal corn growth, the rain-shortened growing window means that cold Autumn weather could cut the growing season short and depress yields even further.
How bad is it? Rather than the USDA forecasted 92.8 million acres of corn planted, most analysts expect 75 to 80 million acres –but there is much uncertainty. Based on the USDA's estimate of 58% of acres planted on May 26, by May 30th, approximately 60% or 55 million acres had been planted.
This year's corn yield was forecasted by the USDA to be 176 bushels/acre (4.47 tonnes/acre). Realistically speaking, we can expect the 60% of acres planted as of May 30 to have average yields at least 5% below USDA estimates. –Optimistically speaking, relative to the 176bushel/acre USDA forecast, that gives those 55 million acres of corn already planted a yield of 167bushels/acre.
As for the 20 to 25 million acres that will be planted after May 30, statistical studies show that crop yields fall by an average of 1.1bushels/acre for every day their planting is delayed after May 30. Given that rains will continue over many crop growing regions into the first week of June, we can assume that most of this acreage will not be planted with corn for until the week of June 8 to 15. That would put the crop yield of these late planted acres at 154bushels/acre.
Roughly speaking (and with much uncertainty due to unknown summer weather), this assumes:
1)  75 to 80 million acres will planted with corn instead of 92.3 million acres forecast
2)  The crop yield will be 167bushels (4.24 tonnes/acre) on the 55 million acres already planted and 154 bushels/acre (3.91 tonnes/acre) on the 20 to 25 million acres that will eventually be planted with corn.
3))  If the rest of the US crop growing season has normal, good crop growing weather, that will lead to a US corn harvest of between 312.1 million and 331.7 million tonnes, with 322 million tonnes being the "average" corn harvest estimate at this time.
4))  Assuming higher corn prices reduce exports to 47 million tonnes (from the 57 million forecasted) and domestic consumption to 310 million tonnes (from the 315 million tonnes USDA forecasted), this reduces US 2019-20 closing corn inventories from the 63 million tonnes forecasted to just 18 million tonnes.
5))  Under this scenario, the US corn stocks-to-use ratio falls from 14.8% to a razor-thin 5.0%.
6))  Depending on the eventual size of the next Latin American crops (which will increase as corn's price rises), the world (minus China) corn stocks-to-use ratio will fall from the current 13.5% to a highly inflationary 8% to 10%.
7))  With China included, the world corn stocks-to-use ratio falls from the current 29% to 24% --Nevertheless, this high value must be discounted by the fact that China will never place its surplus corn on the world market, thereby neutralizing its deflationary impact. 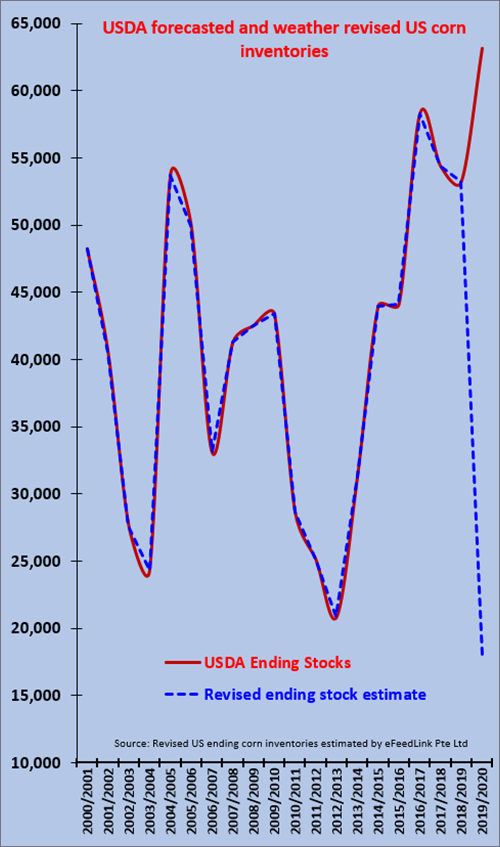 Conclusions and implications
Everyone knows this year's US corn harvest will be much poorer than expected. No one knows by exactly how much, which depends on the next three months of crop growing weather.
Hence, these numbers are by no means the final word on this year's US corn harvest. Unexpectedly good weather cannot be predicted any more than unusually bad weather can. An ideal crop growing season could push this year's harvest above 340 million tonnes. Any more bad weather over Q2 and Q3 could make it fall below 300 million tonnes.
While everyone expected a market upturn after 2020, such rallies are usually sparked by an unexpected "supply shock" –and in corn's case, bad weather capable of sparking a multi-year rally came earlier than expected.
Markets, like life itself, are very non-linear, full of unexpected events, false starts and unforeseen interruptions.
Having said that, current US growing weather has already reduced net short positions from several hundred thousand a few weeks ago to under 100,000 by the end of this week.  This year's bumper crop of Latin American corn is capable of interrupting this rally, especially if it coincides with a sharp improvement in US crop growing weather.
Nonetheless, the medium-term market trajectory is clear: Barring a vast improvement in US crop growing weather, to induce South American farmers to plant more corn later in the year, the golden grain needs to go to over US$5.00/bushel, with beans' price no more than 2.2 times corn's cost.
Price weakness caused by summertime South American corn selling or reports of better US crop growing conditions can be used as buying opportunities.