Gut health and mycotoxins - What do we know so far

Gut health and mycotoxins - What do we know so far

The gastrointestinal tract represents the first barrier against ingested chemicals, feed contaminants and natural toxins. Following ingestion of mycotoxin-contaminated feed, intestinal epithelial cells can be exposed to high concentrations of toxins. This is especially important when considering toxins with poor intestinal absorption, such as fumonisin B1 (FB1; Bouhet et al., 2004). The biological actions of mycotoxins can cause direct intestinal damage. Trichothecenes affect actively dividing cells, such as those lining the gastrointestinal tract. They directly affect protein synthesis in eukaryotic cells due to the interaction with the ribosomal units, preventing either initiation of protein synthesis or elongation of the polypeptidic chains (Ueno, 1984). It should be noted that the gastrointestinal tract (GIT) is also sensitive to trichothecene-induced apoptosis, affecting mainly the gastric mucosa, gastric granular epithelium and intestinal crypt cell epithelium (Bondy and Pestka, 2000). The toxic action of trichothecenes results in extensive necrosis of oral mucosa and gizzard lesions (Leeson et al.,1995). The T-2 toxin inhibits DNA, RNA and protein synthesis in eukaryotic cells, affecting the cell cycle and inducing apoptosis both in vivoand in vitro(Rocha et al., 2005). It should also be mentioned that the primary effect of T-2 toxin is executed through its contact with the mouth epithelium (beak cavity and tongue).

Direct impact of mycotoxins on the gastrointestinal barrier

Another important effect of some mycotoxins, such as FB1 and ochratoxins A (OTA), is that they alter the barrier function of the intestinal epithelium, which is measured as a decrease in the transepithelial electrical resistance. It is likely that the environment surrounding the tight junctions is somehow altered by continuous exposure to FB1 (Bouhet et al., 2004; McLaughlin et al.,2004). Poults fed grains naturally contaminated with Fusariummycotoxins had decreased villus height in the duodenum and decreased villus height and villus surface in the jejunum during the starter period. In turkeys fed the same diet contaminated with Fusarium mycotoxins, the width and villus surface of the duodenum, villus height and surface of the jejunum and submucosal thickness of ileum decreased during the grower phase (Girish and Smith, 2008). Broilers fed diets contaminated with 0.5 mg deoxynivalenol (DON)/kg had shorter and thinner villi, which resulted in lighter small intestines compared to birds fed control diets (Awad et al.,2006). 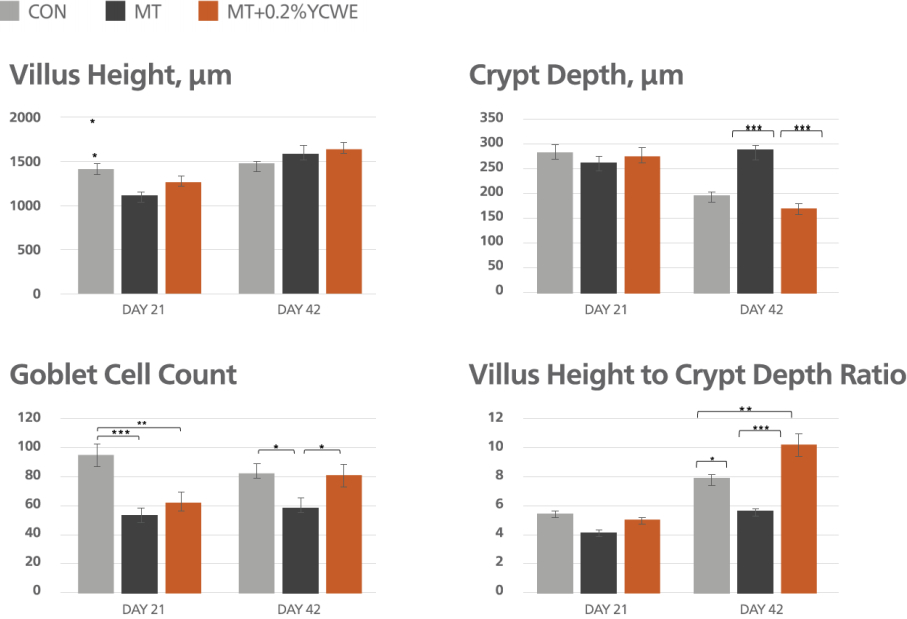 Aflatoxins fed to broiler chickens decreased pancreatic secretions, whereas aflatoxins fed to layers increased the production of pancreatic enzymes (Osborne and Hamilton, 1981). Intestinal morphology (intestinal crypt depth) and the specific activity of intestinal disaccharidase and maltase were also altered by feeding AFB1 (Applegate et al., 2009). This generates a change in the chemistry of the luminal environment. The bacteria that are most suitable to the new luminal environment will have more chances of successfully multiplying.

In addition to the morphological changes induced to the intestinal villi by DON, it is suggested that this mycotoxin inhibits Na+ transport and Na+-D-glucose co-transport in the jejunum of layers. This results in reduced glucose uptake when the intestine is exposed to DON concentrations of 10 mg/L (Awad et al., 2005a). Similarly, in layers, DON affects the intestinal absorption of the amino acids that are co-transported with sodium, such as L-proline (Awad et al., 2005b).

So, the quality and quantity of nutrients available in the intestinal lumen changes since absorption capacity is altered. It is likely that species of bacteria that can successfully ferment the new "luminal diet" will predominate in the lumen.

Sub-chronic ingestion of DON, comparable with concentrations occurring in contaminated food and feed, was reported to impair the intestinal transfer and uptake of nutrients. Black, sticky diarrhea was reported in a flock of 6,700 laying hens in India after they consumed a feed batch contaminated with FB1 (6.5 mg/kg feed) and AfB1 (0.1 mg/kg). Hemorrhages of the proventriculus and accumulations of fluid in the intestine were commonly seen in the postmortem examinations. The disease was then experimentally reproduced in day-old chicks and laying hens by feeding the contaminated diet (Prathapkumar et al., 1997).

In an experimental necrotic enteritis(caused by Clostridium perfringens) infection model, broiler chickens fed a diet contaminated with 5 mg DON/kg of feed were more prone to developing necrotic enteritislesions compared to chickens on a control diet (Antonissen et al., 2014). In that case, DON acted as a predisposing factor by damaging the intestinal mucosa, leading to leakage of nutrients into the intestinal lumen, therefore providing the necessary growth substrate for extensive proliferation of C. perfringens. Another predisposing factor to necrotic enteritisis mucosal damage caused by coccidial pathogens. The interaction of toxins from Fusariumwith strains of Eimeriaresponsible for coccidiosis in poultry has been investigated. Realistic (Girgis et al.,2010a) and occasional (Girgis et al.,2010b) doses of Fusariummycotoxins have also shown delayed intestinal recovery, up-regulation of IFN-γ and delayed recruitment of CD4+ and CD8+ cells after Eimeriachallenges in chickens. Similarly, chickens challenged with strains of Eimeriaand fed with either individual doses of DON and fumonisins (FUM) or in combination (1.5 mg DON/kg and 20 mg FUM/kg diet) showed a higher occurrence of lesions in the GIT and more oocysts in the jejunum and excreta compared to only Eimeria-challenged birds on the control diet (Grenier et al.,unpublished data). Further, high (and unrealistic) doses of OTA to broilers (Koynarski et al.,2007a) and turkeys (Koynarsky et al., 2007b) have resulted in more severe lesion scores and greater incidence of bloody diarrhea after an Eimeria challenge. Besides, typical upregulation of pro-inflammatory cytokines following coccidial infection was stronger in the jejunum of birds fed DON and fumonisin in combination, suggesting an exacerbation of the inflammatory response that might lead to tissue damage.

Although mycotoxins are an unavoidable problem and can have a detrimental effect on gut health and the microbiome, there are some key management practices which can help to reduce the risk of such occurrences. Alltech believes that effective mycotoxin management is about seeing the whole challenge, from the farm to the feed mill and from risk assessment to feed management. To effectively manage the inevitability of feed mycotoxin contamination, it is crucial to understand the level of mycotoxin challenges so that the right steps can be taken to mitigate any adverse effects on animal performance, production efficiency and food safety. Using a combination of powerful management tools, the Alltech® Mycotoxin Management Program provides a complete holistic solution to help producers take control of mycotoxin contamination and protect their business. The program is built around next-generation risk identification technology, data analysis and insights and mycotoxin binder solutions that are designed to reduce the damaging effects of mycotoxins on animal health and production potential.

Find out more at knowmycotoxins.com

Article made possible through the contribution of Dr. Radka Borutova, Dr. Alexandra Weaver and Alltech