Surface tension allows some spiders (and other insects) to walk on water and raindrops to coalesce into beautiful patterns on a surface. But when it comes to animal feed, surface tension has a much less attractive effect – keeping water at the surface of the feed particle where it can threaten the safety, nutritional value and shelf-life of feed.  While adding water during feed manufacturing might sound like a good practice to improve the moisture content of final feed or improve feed mill efficiency, the desired benefits may not be achieved if surface tension is not reduced.

What is surface tension and why does it matter?

The cohesive forces between liquid molecules are responsible for the phenomenon known as surface tension. Surface tension is a physical property of all liquids. At liquid-air interfaces, surface tension results from the greater attraction of liquid molecules to each other (due to cohesion) than to the molecules in the air (due to adhesion). The net effect is an inward force at the water's surface that causes liquid to behave as if its surface were covered with a stretched elastic membrane. Water has the highest surface tension of any liquid next to mercury. Droplets too big relative to the small surface greatly decrease the chances of moisture being absorbed into the feed particle.

High surface tension explains the challenge of feed particles absorbing moisture during feed production. Because of the relatively large droplet size resulting from water molecules' cohesion, the surface area of the droplet is relatively small (as opposed to smaller droplets) and decreases the likelihood the droplet will be absorbed by feed particles.

Beyond hindering moisture's dispersion, higher surface tension also has a negative effect on thermal (heat) conductivity during pre-conditioning. In contrast, a lower surface tension of liquid leads to improved wettability of feedstuffs which has practical implications in terms of improving both the moisture penetration and heat conductivity of animal feed. In feed manufacturing, heat/ thermal conductivity is the ability of feed particles to transport heat via steam to the inside of feed particles. The combined effect of higher and more effective moisture dispersion, along with improved heat conductivity may generate positive effects such as improved starch gelatinization and microbial reduction.

The following data presents the effect of an applied surfactant on droplet size.

Better dispersion of moisture leads to improved thermal/heat conductivity of the feed. Figure 1 demonstrates that the thermal conductivity increases as the moisture content increases. This allows for an improved penetration of steam into the feed particles. 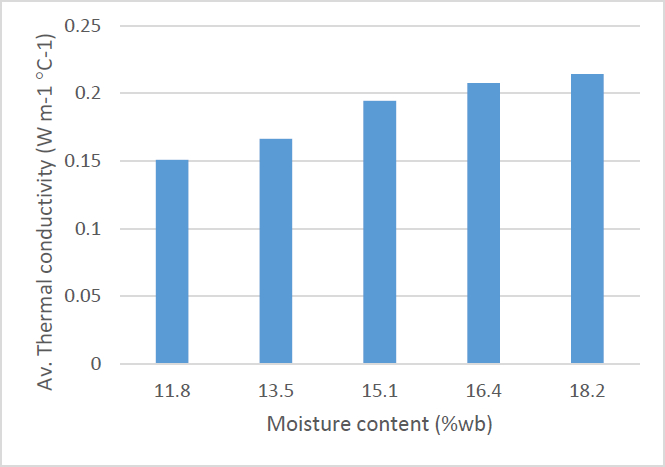 As noted above, a reduction in surface tension allows for better dispersion of moisture during feed processing and better absorption of moisture by feed particles. Surfactants composed of blends of buffered organic acids deliver a benefit beyond the surfactant itself when it comes to improved water and thermal distribution.  Not only is water spread more evenly and effectively in the feed, but ingredients that affect harmful microbes are enabled to be more widely dispersed in the feed. 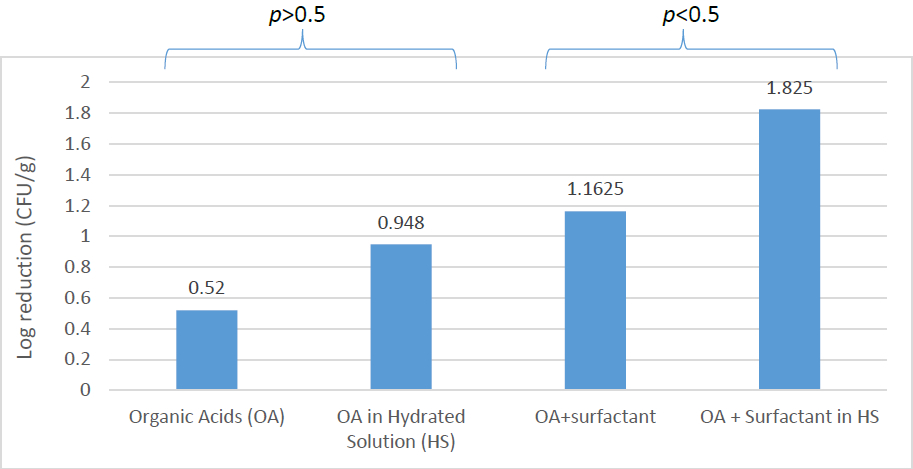 3.  Positive effect on tempering of grains during rolling flakes

Grain tempering uses water and time to temper (soften) the grain. Bran outer layers become more flexible and more readily separated from the endosperm during rolling. It is essential that moisture is absorbed and does not stay at the surface of the grain. The surface tension of water, however, affects the time needed for the liquid to be absorbed.

Mixing the water with buffered organic acids and surfactants has been shown to deliver a positive impact on the tempering times, as well as the quality of the flakes obtained by the roller mill.

Adding a surfactant during tempering was shown to decrease moisture loss after flaking (P = 0.05). Reducing the surface tension of the water can also improve flake durability.*

Not all surfactants are equal

Surfactants reduce surface tension by causing water to be dispersed in smaller droplets. However, not all surfactants are created equal and potency is required to assure the most effective dispersion. Trouw Nutrition, a Nutreco company, performed extensive benchmark research and validation studies to select and combine organic acids and surfactants to significantly reduce surface tension. Figure 1 shows how 23 products – including three Trouw Nutrition products and single emulsifiers – performed in a comparative study evaluating reductions in surface tension.

Figure 3.  Surface tension of a 5% dilution in water

Besides utilizing organic acids and surfactants in a hydrated solution, it is of vital importance that the dosing of such hydrated solutions be accurate and concise. Trouw Nutrition offers various dosing equipment solutions that enable application of a hydrated solution to be fully automated and integrated on the feed production lines. This service is part of the company's Feed Safety programme, which offers solutions to feed producers and home-mixing farms looking to maintain the highest possible feed quality standards.

Article made possible through the contribution of Dr. Prince Nanda, Jeffrey Huijsmans and Trouw Nutrition