Leading the fight against Avian Influenza

Leading the fight against Avian Influenza

The need to combat Avian Influenza (AI) on poultry farms has arguably never been greater than it is today. As governments and health authorities fight to contain the devastating impact of Covid-19, it is vital to avoid any easing of focus on other issues, such as AI with its potential to cause serious zoonotic damage.

AI is a highly contagious viral disease which can have a great impact on poultry health and production, causing high mortality levels and a significant depression of egg production in infected layers. It is also extremely dangerous to some humans, resulting in death rates of up to 60% in severe cases. In addition, there is a risk that the Avian virus could combine in the future with an existing human virus, becoming an even more alarming threat to life.

Fighting AI is therefore vitally important, requiring farmers to adopt the strictest possible biosecurity measures across all production units, alongside addressing the core health of poultry stock as an added defence against infection.

The disease itself is due to an Orthomyxovirus which carries different levels of pathogenicity, depending on its serotype. H5 and H7 are considered to be the most highly pathogenic strains.

First noticed in 1958, AI initially caused note-worthy outbreaks only once every three or four years. More recently, we've become used to dealing with several new clusters each year. Pathogenicity remains extremely variable, ranging from some birds developing 'safe carrier' status to others suffering morbidity and mortality rates of up to 100%.

The virus most commonly appears in its low pathogenic form (LPAI) which, while causing relatively frequent outbreaks, carries a much lower infection impact than the more dangerous high pathogenic strain (HPAI).

No treatment presently exists for HPAI, with vaccination against it being forbidden in most countries; the only exceptions being situations where infection levels would otherwise spiral out of control.

The best line of defence for poultry farms is to do everything possible to stop the virus from getting into production areas in the first place. In cases where it breaks through, however, the focus needs to switch to getting rid of it as rapidly as possible.

•  Establishing protective barriers around the site.

•  Creating a site entry process for approved visitors. Some units use a three-stage system which requires visitors
to change their clothes, wash, and then put on clean farm clothing, all before working in poultry areas.

•  Introducing footbaths and changing the solution every day.

•  Establishing a designated unloading process for deliveries, ensuring that vehicles and drivers are kept well away
from production areas. Vehicles should also be disinfected on arrival, at least the wheels.
•  Fitting grills to air entries to stop wild birds and insects from getting in. This is vital, given that one trial, based
in Japan, revealed that 30% of flies, captured within a 2 km radius of a contaminated farm, had the virus.
•  Clearing plants and weeds from production zones to remove habitat options for rodents and other wildlife.
Figure 1  (from Jean-Pierre Vaillancourt): Danish poultry farmers disrobe, wash and then don sanitized clothing and boots before mingling with the chickens. There is no vegetation against the houses to keep out bacteria-carrying rodents and insects.

It's also important to ensure farm areas are easy to clean and disinfect, both to prevent a virus taking holding within a production area and to remove it quickly if it does. Areas surrounding production units should be concreted, rather than left as bare earth or rough stone. Interior floors should also be finished in concrete and walls should be smooth to ease cleaning.

Buying new poultry stock involves the inevitable risk of importing the virus. Sourcing should therefore be from suppliers who have good protective management in place.

Vaccination should be considered wherever such action is authorised, taking care to separate infected and vaccinated animals after the procedure has been completed.

Well-planned cleaning and disinfection routines as essential, alongside control and eradication activities aimed at rodents and insects.

Farmers should monitor stock constantly, looking for signs of changes in feed or water intake, the appearance of disease symptoms or rising mortalities, such as 4% losses on a single day or even a 1% loss which continues for two consecutive days.

Maintaining good communication with neighbouring farmers is also valuable, enabling any signs of infection to be shared on an early alert basis.

Ensuring birds are in the best health possible is another key aspect of equipping stock to withstand an AI attack. In this context, researchers at Phileo by Lesaffre have developed two solutions to help make birds more resistant to disease, including raising their natural defences against AI.

The first product to consider is Safmannan®, a premium yeast fraction which been shown in poultry trials to improve gut integrity, increase resistance to pathogenic bacteria and enhance stock immunity levels. As a result, birds receiving Safmannan® as a feed supplement have shown an improved response to several types of vaccinations, including against Newcastle Disease (ND) and AI.

In a broiler trial (Gomez-Verduzco et al., 2009), meanwhile, featuring 840 day-old Ross 308 chicks, with vaccination against ND given at 10 days, higher immune responses were recorded in Safmannan® supplemented birds than in a control group. Measured at 17 days, the Safmannan® birds had 3.86 antibody titres (log2) against the ND vaccine, compared with 3.11 for the control birds.  Measured again at 24 days the Safmannan® v control result was 7.71 to 5.55 in favour of the supplemented birds (Figure 2). 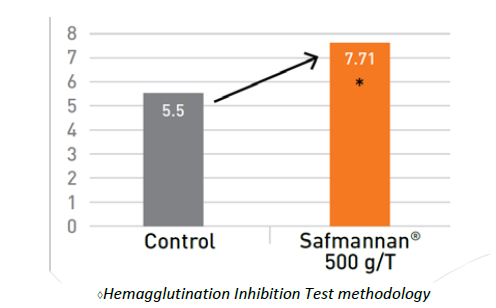 Another trial, this time dealing with laying hens which were vaccinated against both ND and AI, showed similar immune response benefits for the Safmannan® birds. Measured in terms of antibody titres against AI (log2), the Safmannan® hens scored 5.7 compared with 3.4 for the control group. The equivalent ND result was 7.2 to 5.8 in favour of the Safmannan® group (Shahir et al, 2013).

There is also trial evidence that Safmannan® improves bird performance. Studied over a test period running from weeks 22 to 34, Safmannan® supplemented layers produced two eggs per hen more than hens in a control group. This result was achieved despite the hens facing high disease pressure and undergoing vaccination.

A broiler trial in Pakistan, meanwhile, focusing on H9N2 LPAI, found that virus excretion in birds given Safmannan was significantly reduced in the trachea as little as five days after challenge and disappeared completely eight days after challenge. This compared with virus excretion which was still ongoing at eight days in a comparative control group (T. Akhtar et al., UVR, 2016).

The second Phileo development is Safglucan®, a yeast cell wall fraction which has been shown in trials to have even more effective impact on poultry immunity than Safmannan®.

Used on an experimental farm in Mexico in a trial involving 64 male birds, Safglucan® was studied according to its impact on birds after they were vaccinated against ND. Results showed Safglucan® supplemented birds had a faster and stronger vaccine response than birds in a vaccinated control group (Figure 3).

While attention to on-farm biosecurity is a priority for farmers in combatting AI, it's also clear that in countries where LPAI vaccination is authorised, Safmannan® and Safglucan® can help improve the protection of birds. In addition, when poultry stock become contaminated, the two supplements have a proven capacity to help reduce the spread of AI from farm to farm by lowering both the quantity and duration of virus excretion by infected birds.

Article made possible through the contribution of Phileo
Video >
Technical Paper >
Raising the phytase podium
Phytate is the main storage form of phosphorus in all grains, which represent the basis of most plant-based diets used in animal production. To improve phosphorus availability and ...
Exogenous enzymes as zootechnical additives in animal feed: A review
Enzymes are widely used in the food industry. Their use as a supplement to the raw material for animal feed is a current research topic. Although there are several studies on the a ...
The evolution and application of enzymes in the animal feed industry: the role of data interpretation
Enzymes have been used commercially for nearly 40 years and save significant costs through sparing of expensive nutrients but the mechanism by which this is achieved is still debat ...