The immune system is constantly under siege by different stressors. Stress, whether from disease or environmental factors, plays a critical role in the overall health and well-being of poultry flocks. Environmental stressors, such as poor flock management, low feedstuffs quality and feed contaminants such as mycotoxins, are some of the factors associated with immune function suppression in birds. Viral and bacterial infections can also cause immunosuppression. These various stressors often lead to a decrease in resistance to infectious diseases and the inability to mount a proper immune response, even in the face of adequate vaccine programs.

In the poultry industry, immunosuppressive viral, bacterial and protozoal diseases are mitigated and controlled with vaccines. However, producers continue to experience challenges in controlling outbreaks of diseases affecting their flock's productivity, despite appropriate vaccines and vaccine programs. In this article, we explore how mycotoxins — a common but often underdiagnosed problem — could be one factor involved in vaccination program failure.

The main role of the immune system is to recognize foreign organisms and materials as non-self, as well as to mount a response to the challenge [1]. The two branches responsible for mounting a response are based on innate or adaptive immunity. The innate immune function is considered the first line of defence. It is composed of physical and chemical barriers, such as skin and gastric secretions, as well as the inflammatory response process through cellular components, such as white blood cells. In contrast, adaptive immunity is involved in pathogen recognition, neutralization and elimination through the production of antibodies and memory cells that help rapidly recognize pathogens. For both systems to successfully mount a defence, factors such as virulence, type of challenge and the bird's well-being and immune status must be taken into consideration [2, 3]. Therefore, it is important to maintain the integrity of the immune system of birds when considering vaccination programs to help control disease.

The use of vaccines and vaccine programs plays a crucial role in the mitigation and control of infectious poultry diseases [4]. Their goal is to minimize the duration and spread of the disease, reduce clinical signs and decrease production loses. Although the use of vaccines is considered an economical alternative within the poultry production system, they still accrue a significant cost. Therefore, vaccine and vaccine program failure would have an economic, as well as an animal welfare, impact, and problems should be fully investigated.

Some of the areas for vaccine failure can be attributed to problems with the vaccine itself, user or application failure and bird factors such as immunosuppression. Some characteristics of immunosuppressed birds can include improper vaccine reactions, increased secondary bacterial infections, uniformity problems, atrophy of immune-associated organs, a decrease in performance parameters, increased morbidity and mortality. Immunosuppression in poultry may go unnoticed, as it can manifest differently from flock to flock.

One suspected agent of immunosuppression circulates in the flock's feed, feeding systems and bedding materials. Mycotoxins, or secondary metabolites from fungi, can cause immunosuppression. Mycotoxins often go unnoticed unless a well-established mycotoxin testing and action plan is in place. Typically, the number of mycotoxins tested for at the feed mill level is limited to, maximum, four common types, but this excludes a vast majority of existing mycotoxin contaminants. In fact, mycotoxin analysis of global poultry feeds in 2020 shows an average of 8.2 mycotoxins, with 99% of samples containing two or more mycotoxins (Alltech 37+® mycotoxin analytical services laboratory; 397 samples analyzed by UPLC-MS/MS). Over 56% of these samples contain fumonisins, type B trichothecenes, zearalenone, fusaric acid and other emerging mycotoxins. Although grains, grain derivatives and other feedstuffs tend to be more commonly affected, materials such as bedding can also be contaminated.

Effects of mycotoxins on control of diseases and vaccination program outcomes

Poultry are susceptible to most mycotoxins. Therefore, it is vital to consider mycotoxins as one of the potential causes of immunosuppression [5, 6]. Mycotoxins can impact the innate and acquired immune responses in birds, which in turn decrease the response to vaccines. Although mycotoxin effects on rapidly differentiating and proliferating cells are complex, the common mechanism for immunosuppression is through inhibiting protein synthesis [7]. As a result, signals for the synthesis of antibodies and immunoglobulins are downregulated [3, 5].

Chronic exposure to mycotoxins, even at lower levels, can lead to immunosuppression. Some of the more commonly studied mycotoxins that can directly interfere with vaccines are aflatoxin, trichothecenes, fumonisins and ochratoxins. Others, such as cyclopiazonic acid (CPA), rubratoxins and citrinin, can also cause immunosuppression and vaccination failure [7-9]. Studies looking at vaccine response in the face of a mycotoxin challenge have consistently reported a reduction in titers, decreased white blood cell counts, reduced immunoglobulin levels, low immune organ weights and overall reduced body weight gains[7].

Viruses known to cause immunosuppression are typically controlled through a combination of various vaccinations and stress reduction programs [10]. Mycotoxins can hinder the effectivity of the vaccine against the same viral agents known to cause immunosuppression, and despite vaccination, problems such as infectious bursal disease virus (IBDV) and Marek's infections continue to be seen in flocks. Contamination of feed with aflatoxin was reported to lower antibody titers of IBD, infectious bronchitis (IB) and Newcastle disease (ND) in immunized birds [11, 12]. Aflatoxin and T-2 toxin have been reported to affect Marek's vaccine programs [13, 14]. Fusarium spp., such as deoxynivalenol (DON), are shown to influence titers to IBV and NDV [15]. Furthermore, mycotoxins can also impact progeny from breeders fed aflatoxin-contaminated feed, with higher embryonic mortality, decreased chick liveability and reduced capabilities of the progeny to fight infections [9, 16].

Vaccines to control bacterial diseases are also important in the poultry industry [17]. As the use of antibiotics and antibiotic resistance continues to affect poultry production, vaccines associated with foodborne pathogens such as Salmonella spp. are of interest. Mycotoxins have been reported to increase the susceptibility of the gastrointestinal epithelium to bacterial infections, such as Salmonella spp., E. coli and Clostridium spp. [5, 18-20]. It is reported that DON and T-2 toxin can enhance the uptake and survival of Salmonella into macrophages, which play a key role in the clearance of bacterial organisms [19, 21]. These mycotoxins increase pro-inflammatory cytokines and chemokines in the gastrointestinal tract and alter T- and B-cell responses. Response to diseases, such as E. coli and Clostridium, is also affected by mycotoxins. DON-contaminated feed is shown to increase the incidence of necrotic enteritis in broilers, due to intestinal damage leading to protein malabsorption [18]. The increase of nutrients available to Clostridium perfringens could allow for a conducive environment for the microorganism to thrive and toxins to be produced.

The use of coccidia vaccines in the poultry industry is another common tool used to help prevent the production losses typically associated with coccidiosis. Mycotoxins may delay the recovery following a coccidiosis challenge, affect the gastrointestinal morphology, exacerbate lesion scores and increase oocyst number [22].

Clinical signs associated with mycotoxins are often similar to other etiological agents. Mycotoxins at chronic or lower levels may not raise any red flags regarding performance and disease susceptibility, but because mycotoxins tend to affect immune cells and gastrointestinal function, these may be the first places to look for mycotoxin exposure.

In the house, some of the first signs that appear with intestinal dysfunction are slicked or wet floors and increased feed passage in the manure. Ammonia levels can also be elevated. On external examination of the birds, there may be increased footpad dermatitis lesions, increased dirty feathers, poor feather coverage or ruffled feathers. Birds may back off feed and increase water consumption.

When examining the birds in a necropsy, mouth lesions and gizzard erosions can be present, with or without proventriculitis. Observation of the intestines can show increased mucoid enteritis, cellular sloughing of the villus epithelium, lack of integrity of the gut wall and foamy or pale watery cecal contents. Immune organs, such as the bursa of Fabricius, thymus and spleen, may show decreased weight and appear atrophied. The liver can show increased pallor, friability and may be swollen; the kidneys may appear pale and swollen, with increased urate deposits in the glomeruli and ureters. Other organs and organ systems may also be affected; however, depending on the mycotoxin type, length of exposure and affected species, these clinical signs may vary. Although these symptoms, and many others, can be associated with mycotoxins, it is important to rule out other potential causative agents. 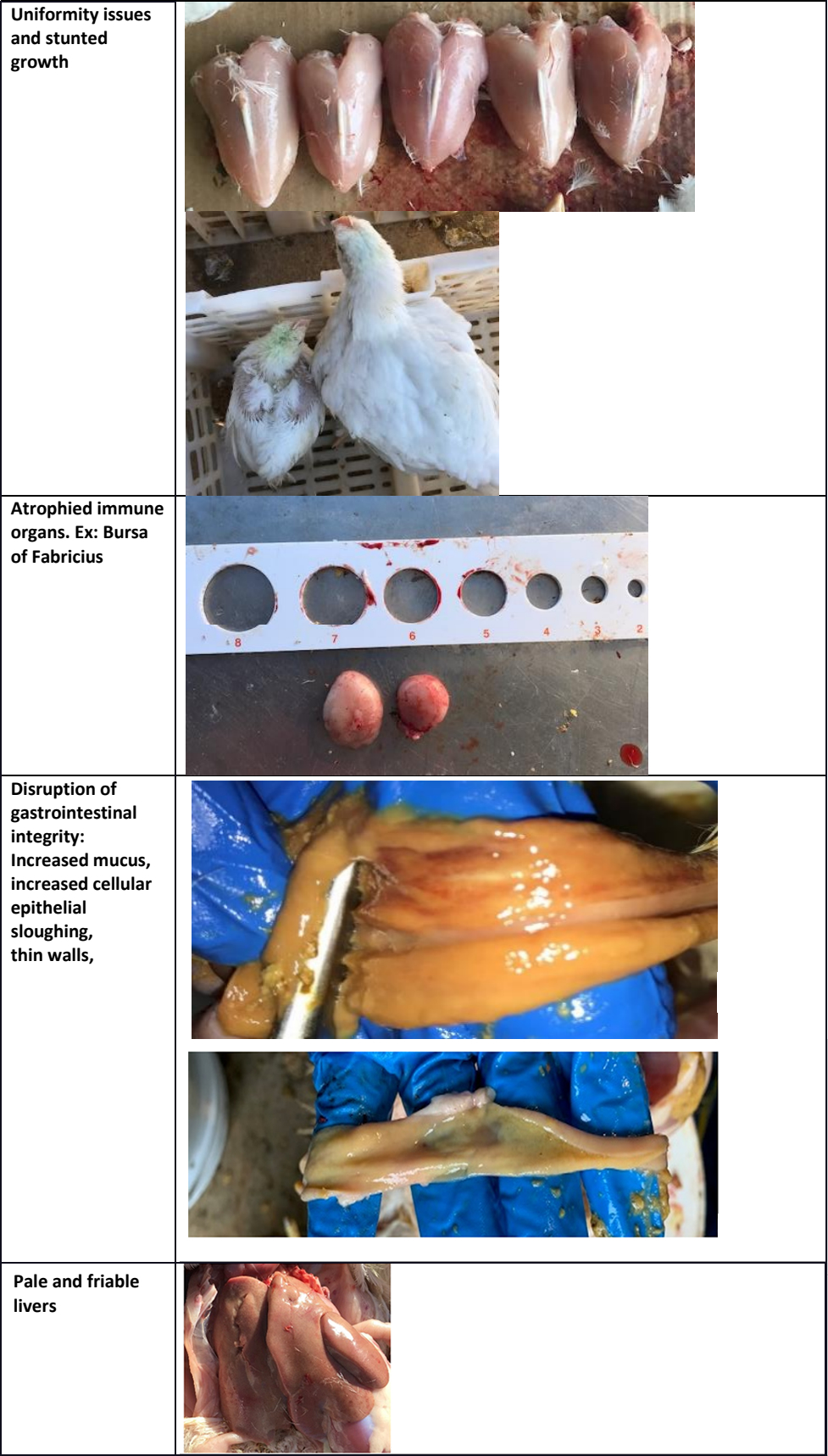 This list is not exhaustive, there are other clinical lesions associated with potential mycotoxin immunosuppression.

Recognizing mycotoxins as a problem and steps to prevent further damage

Painting a whole picture as to how mycotoxins are affecting a vaccine or vaccine program is not straight forward. Mycotoxins influence the virulence of pathogens through an increase in the invasiveness of immune cells and changes in microbial toxicity factors. Although the role of mycotoxins in the alteration of the immune system has been studied, further research is still needed to establish the roles of less well-known mycotoxins and chronic exposure to mycotoxins. However, when a vaccine fails, a thorough investigation should certainly include a complete mycotoxin analysis panel. Evaluation of feedstuff components before they are included in the feed and mycotoxin mitigation strategies can increase the success of vaccine programs in the field. Adsorbents that manage the risk of multiple mycotoxins simultaneously, such as Alltech'sMycosorb A+®, can also be used to mitigate the clinical signs associated with mycotoxins and potentially help vaccine programs.

Article made possible through the contribution of Dr. Dulmelis DG Sandu, Dr. Alexandra Weaver and Alltech

Video >
Technical Paper >
Working smarter: How multi-tier aviaries can help solve labor issues
As the cage-free egg trend continues to grow in North American markets, the amount of skilled and consistent labor required to maintain operations has not followed. One of the top ...
Eggshell quality: 3 solutions for older laying birds
Older laying birds are still a valuable asset, as long as they are managed for performance and productivity. Eggshell quality is one of the elements that, without proper management ...
Advantages of multi-tier aviaries in cage-free egg production
Cage-free facilities remain a dominant trend in North American egg production, driven by the growing demands of consumers, supermarkets, restaurants and others in the food supply c ...