Expert views on effectiveness, feasibility, and implementation of biosecurity measures for mitigating Tier 1 disease risks in the US swine, beef cattle, and dairy industries

Expert views on effectiveness, feasibility, and implementation of biosecurity measures for mitigating Tier 1 disease risks in the US swine, beef cattle, and dairy industries

Understanding disease transmission routes and implications for biosecurity is critical to mitigating livestock disease outbreaks and maintaining efficient and profitable production. The goal of biosecurity is to eliminate pathogen exposure and minimize endemic pathogen impact, particularly important for foreign animal diseases that threaten U.S. animal health and the economy. We elicit swine, beef cattle, and dairy expert views on the effectiveness, feasibility, and implementation of both biosecurity measures targeting disease transmission routes and specific biosecurity measures. Biosecurity targeting direct animal-to-animal contact, semen, people, and vehicles and other fomites was identified as the most effective and feasible for the swine, beef cattle, and dairy industries. Efforts targeting airborne and arthropod transmission were ranked low for effectiveness and feasibility across all three industries. The swine industry had higher estimated implementation of biosecurity against most disease transmission routes. All-in and all-out production had the highest estimated implementation in the swine industry. In the beef cattle industry, performing daily observations by producer/employees had the highest estimated implementation. Reduced environmental viral load through pathogen reduction had the lowest estimated implementation in the swine and beef cattle industries. In the dairy industry, monitoring production records for health status changes had the highest estimated implementation, and line of separation in place for all employees entering premises had the lowest. Swine experts considered separation line for all animals entering/leaving premises and reduced environmental viral load through pathogen reduction the most and least effective and feasible, respectively. Stabilization and monitoring for affected premises and daily observations by producer/employees were identified as most effective and feasible by beef cattle and dairy experts, respectively. All-in and all-out production was rated least effective and feasible by both beef cattle and dairy experts. 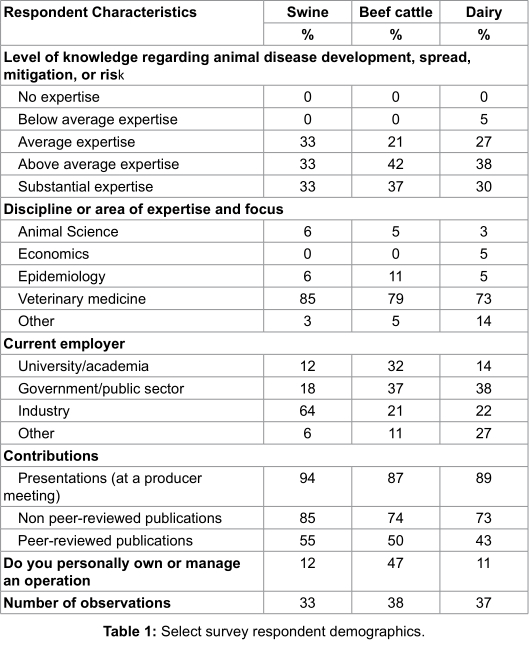 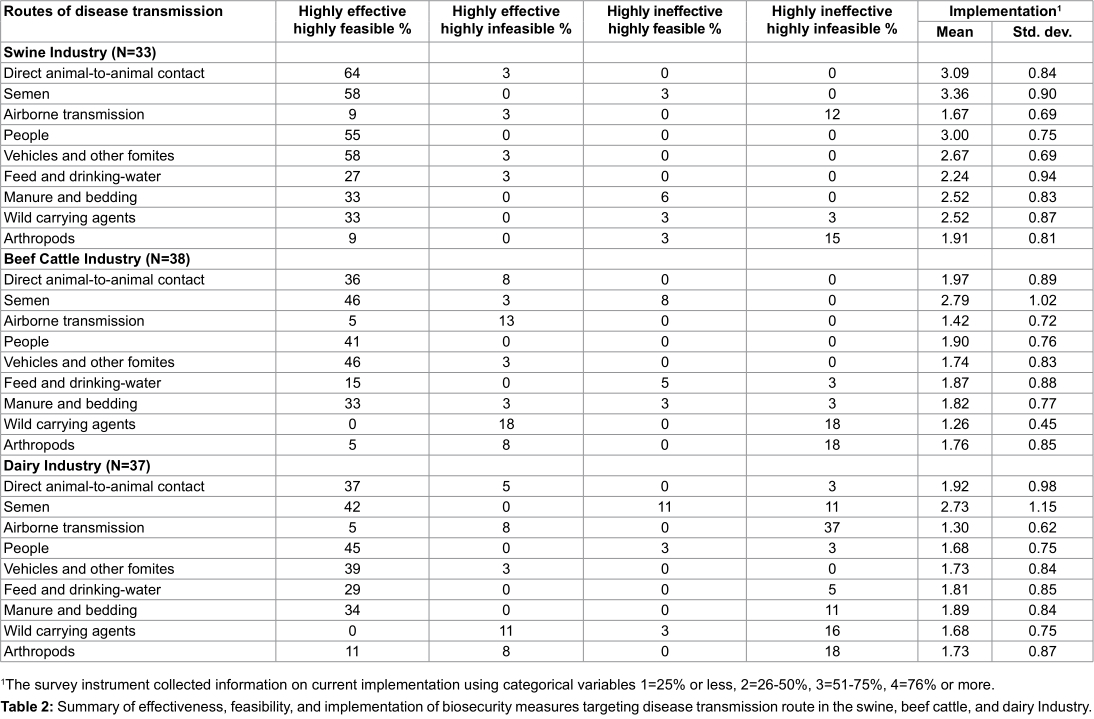 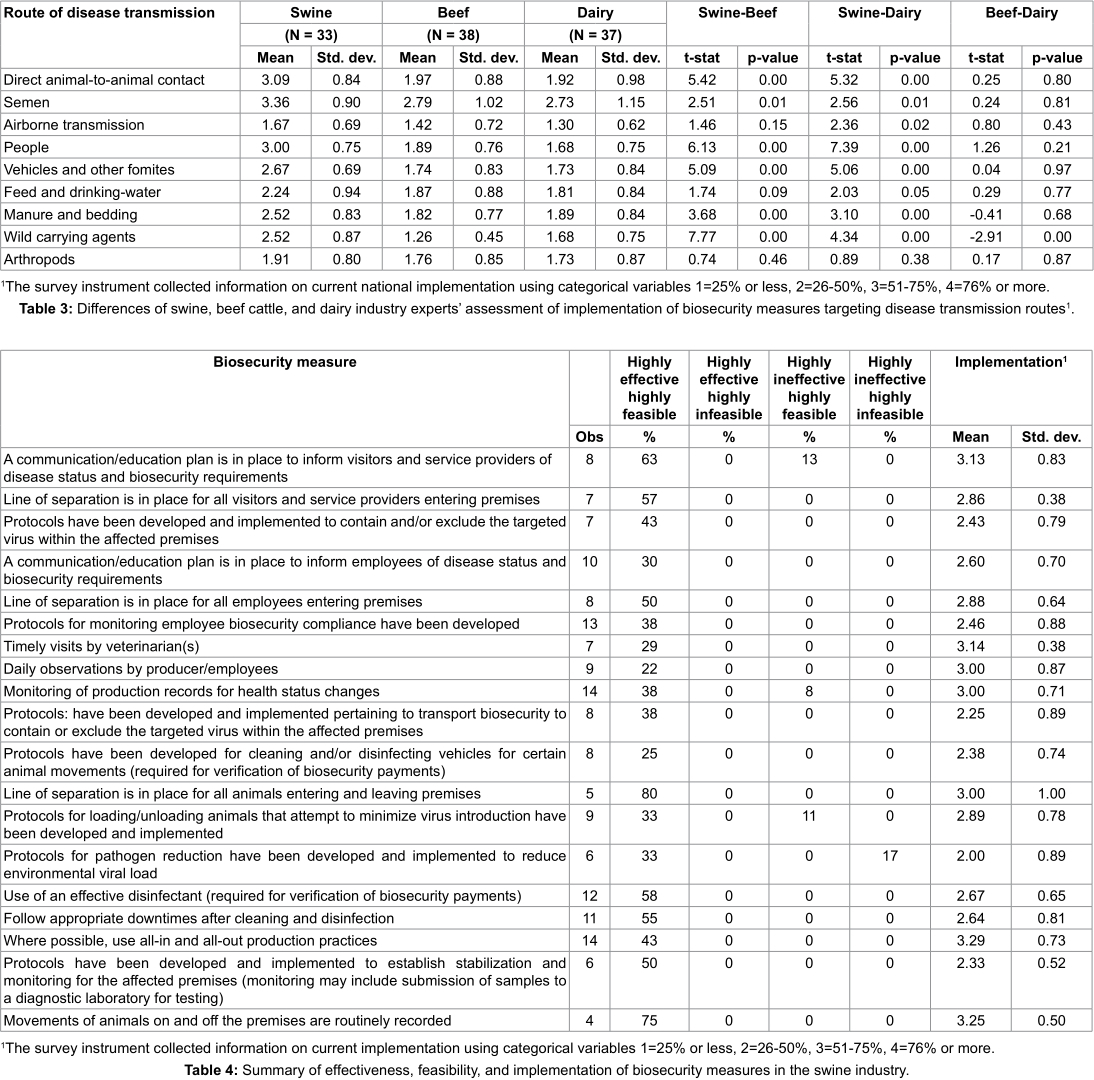 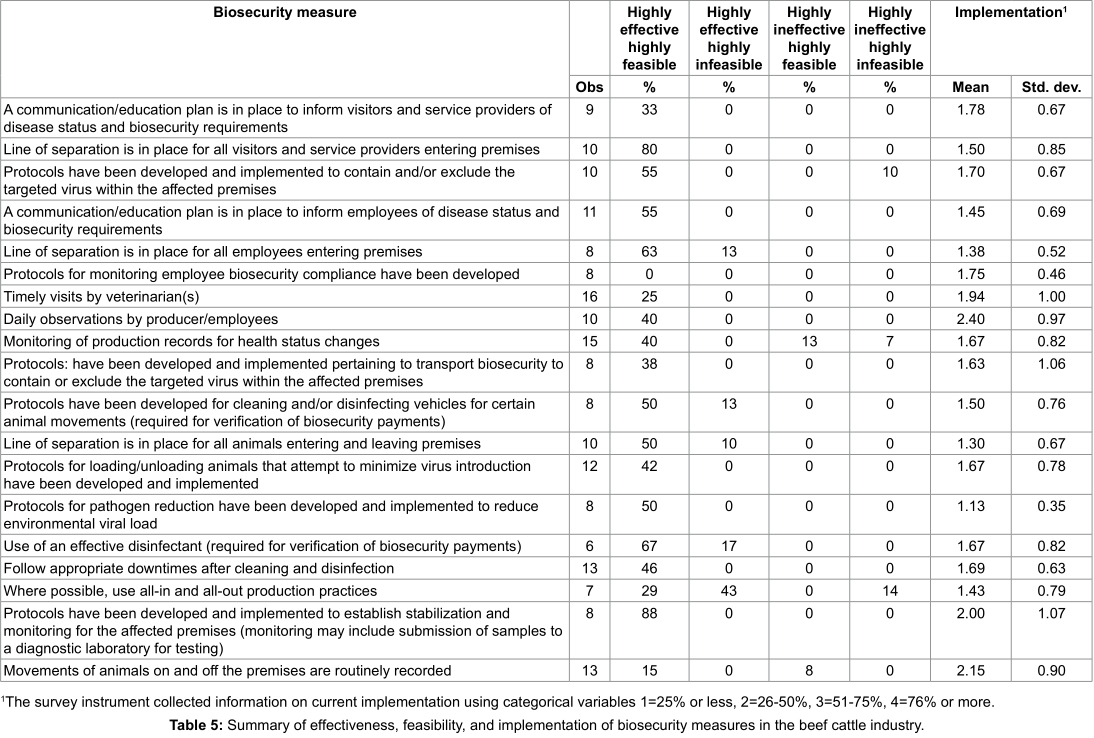 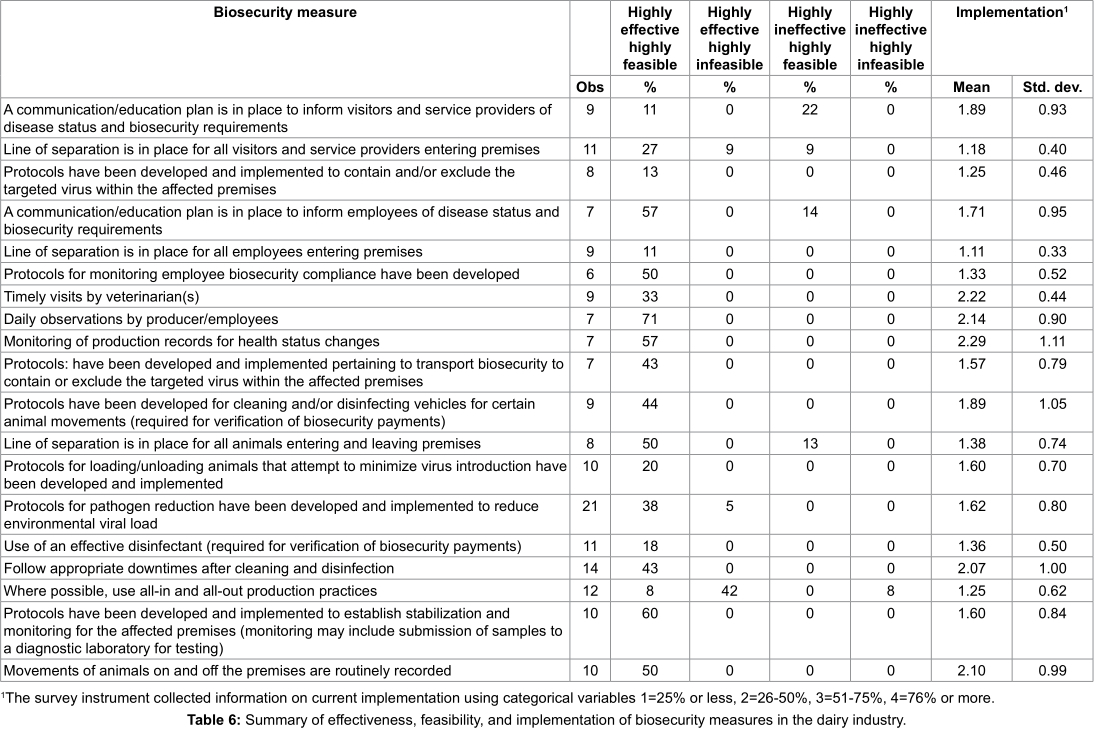 Biosecurity measures
Swine industry experts estimated that over 50% of the industry was implementing all-in all-out production (where possible), recording movements of animals, accessing veterinary services in a timely manner, communicating biosecurity requirements with visitors and service personnel, monitoring production records for changes in health status, observing animals daily, and maintaining a line of separation for animals entering and leaving the premises. Of these practices, maintaining a line of separation for animals entering and leaving, was ranked as being both highly effective and highly feasible by the greatest number of experts (80%). However, maintaining a line of separation for all visitors and service providers and for all employees was ranked as highly effective and highly feasible by fewer experts (57% and 50%, respectively) and is estimated to be implemented by fewer than 50% of the industry. Establishing a premises line of separation for people and animals is a key component of Secure Food Supply guidance to support continuity of operations in the event of a foreign animal disease outbreak (http://www.securepork.org/plan-components.php). As such it is an important biosecurity measure to mitigate a Tier 1 disease risk.
Another key component of Secure Food Supply guidance is observation and reporting of animal health status. Accessing veterinary services in a timely manner, monitoring production records, and observing animals daily are all implemented widely by the industry, despite being ranked highly effective and highly feasible by fewer than 50% of expert respondents. Managed movements of animals would be part of a foreign animal disease response. Recording of movements is important for tracing disease (forward or back) and has been implemented by more than 50% of the industry.
All-in all-out production is used by over 70% of nursery pig [25] and over 80% of feeder-to-finish farms [26] and has been shown since the early 1990s to improve health and performance [27], primarily by facilitating the control of respiratory diseases and reducing variability within lots of hogs marketed. Premises with all-in all-out production were able to implement protocols to eliminate porcine epidemic diarrhea virus from herds (personal communication). The integration of movement between premises specializing in different production phases requires pre-planning to address movement management in the event of a foreign animal disease outbreak.
Interestingly, the list of biosecurity measures, informed by the literature, from which experts were asked to evaluate a subset does not include any practices designed to minimize disease transmission risk by means of airborne or arthropod-borne spread. Efforts to minimize feed and water contamination do not appear on this list either. Manure management as a measure to prevent feed and water contamination and vector control in general do commonly appear in biosecurity recommendations in the United States [28].
Conclusion
Experts report differences in effectiveness, feasibility, and current implementation of biosecurity measures targeting disease transmission routes and recommended biosecurity measures among swine, beef, and dairy industries. With this information, a targeted set of disease transmission routes and biosecurity measures can be examined that would allow for a more in-depth and refined study, enhancing the power of future studies, and improving the ability to formulate recommendations. All biosecurity measures come with a cost and ineffective and infeasible methods should be avoided. Likewise, transmission routes that impose the greatest risk should be the focus, rather than low-risk transmission routes.
The information and infrastructure needed to achieve adequate biosecurity can vary significantly by industries. Variations in the management and marketing structure of each livestock industry, including size and reliance on extensive movement of animals, can complicate progress towards achieving sufficient biosecurity. Prioritization of the most effective and feasible biosecurity measures will ensure resources are applied where biosecurity advances are of the highest importance and that will offer the greatest return on investment.

Article made possible through the contribution of L. Schulz et al.