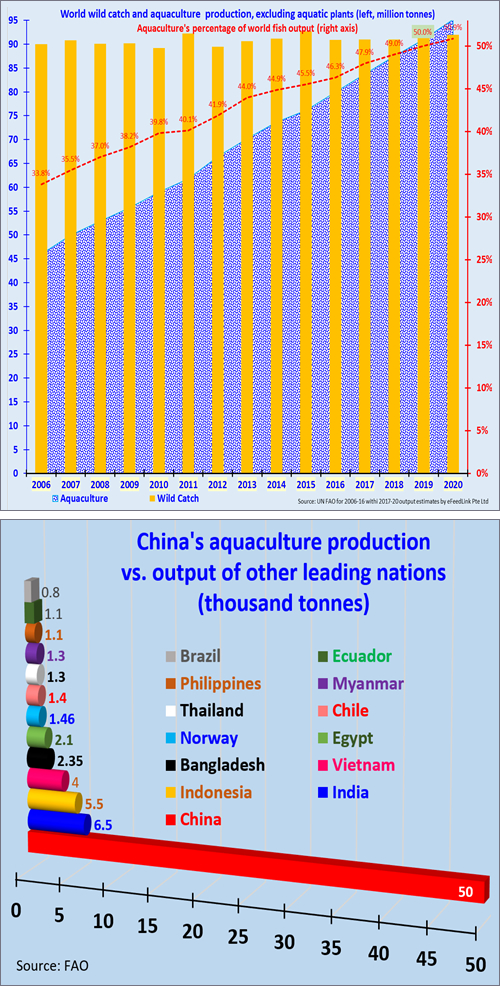 World aquaculture's production growth has profoundly decelerated but continues to far exceed that of all other protein lines. This is unfortunate because it was fish farming's substitution in place of flat wild ocean catches that made it possible for the global seafood consumption to rise 3.2% annually since 1960, which is double the world population growth rate.
Expanding fast enough to overtake population growth amid flat or declining wild catches, rapid aquaculture expansion enabled world per capita seafood consumption to rise from an FAO estimated 9kg in 1961 to 20kg in 2016 and a projected 21kg by 2020.
After an annual expansion rate of 10.8% in the 1980s and 9.5% in the 1990s, the FAO's State of the World's Fisheries and Aquaculture (SOFIA 2018) report notes that average annual growth decelerated to 5.8% in the sixteen years ending in 2016 –this, however, does not capture the full extent of the industry's deceleration since 2010, with estimated 2013-18 annual growth of 4.5%.
Moreover, world aquaculture's growth slowdown is reflected in aqua feed statistics: Alltech's Global Feed survey figures show that from 2011 through 2018 inclusive, annual world aqua feed production growth averaged 4.4%, which is less than half the rate it was growing just two decades earlier.
The past decade has seen fishmeal prices repeatedly break their all-time records and the sector's one-time key feed input's availability shrink at the same rate as farmed fish production expanded. Coinciding with a secular slowdown in the world's largest aquaculture market and intractable disease outbreaks in the most valuable farmed species, the growth leading shrimp and salmon sectors both faltered in the early 2010s, with the latter entering a five-year price doubling rally.
At the same time, aquaculture's broad spectrum of cultivated species means that it does not lend itself easily to sweeping generalities: Species-wise, production of high-value, growth leading salmonids and crustaceans faltered but most other seafood kept expanding at growth rates comparable to those seen before 2010.
Geographically speaking, aquaculture stopped expanding aggressively in its core China and Southeast Asian heartlands, which collectively account for over 75% of world aquaculture output. At roughly 50 million tonnes, China single-handily accounts for approximately 60% of world aquaculture output. At the same time, Chinese aquaculture growth may have come to a standstill not yet recorded in official statistics.
Seafood conference panelists agree that FAO statistics overstate world shrimp production by up to a million tonnes, with most of the statistical error accounted for by China. Shrimp production there has fallen by from over a million tonnes at the start of the 2010s to just over 500,000 tonnes last year.
Moreover, shrimp cannot be the only faltering Chinese aquaculture line whose stagnation is not reflected in official FAO statistics: Alltech Global Feed Survey statistics show that from 2011 through 2018 inclusive, rapid 9.8% annual aqua feed  production growth outside of China was greatly offset by -0.8% yearly fall in its output in China.
This nominal annual fall in Chinese aqua feed output is offset by improving feed conversion ratios, it still implies that its aquaculture production growth has leveled out. The exhaustion of frontier cultivation areas and faltering production of several mature finfish and crustacean species is offset by growth in other lines, keeping Chinese production level near 50 million tonnes, or just under 60% of world aquaculture output.
Going forward, Sondre Vevstad, an executive with Denmark-based Danske Bank, states that Chinese policymakers still intend to grow aquaculture output to 62.3 million tonnes or 30% by 2025, with most production increases coming after 2020. Even this ambitious goal implies that for the years 2015 through 2025, the dominant aquaculture producer's long-term growth rate will average less than 3% annually.
Fortunately, China's stagnation is partly offset by rapid growth in South America, Central America and the Indian subcontinent. India's cultivated shrimp crop jumped from slightly under 100,000 tonnes in 2009 to 640,000 tonnes last year.
Similarly, Ecuadorian shrimp production increased from under 150,000 tonnes at the turn of the decade to 500,000 tonnes in 2018. The same story is repeated in the world whitefish market, where expanding tilapia and pangasius output in Latin America, Indonesia, Vietnam and Egypt is offsetting decelerating Chinese production growth of these fish lines. 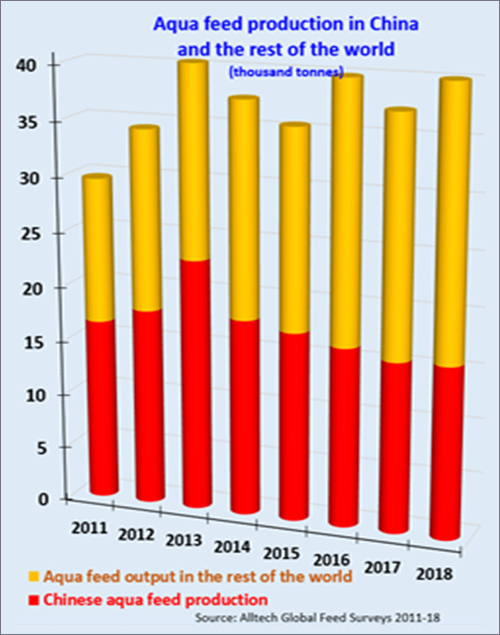 At the same time, profound differences between the physical quantity and monetary value of farmed seafood produced keynote the industry's contradictions even more than regional growth slowdowns. Volume-wise, of the 80.1 million tonnes of aquaculture output in 2016 (the last year of finalized FAO statistics), 54.1 million tonnes (67.5%) was accounted for by finfish. This is followed by 17.1 million tonnes (21.3%) of molluscs output and 7.9 million tonnes (10%) by crustaceans, with Pacific whiteleg and Tiger shrimp accounting for 3 million tonnes of this line's output. Aquatic animals such as turtles, frogs and jellyfish accounted for a residual 1% of production.
On one hand, accounting for two-thirds of physical output, finfish only made up 59% or US$138.5 billion of 2016 world finfish farming revenues. This reflects the physical dominance of low-value, North East Asian based cultivation of carp species, which accounted for 30.5 million tonnes or 56% of finfish output.
On the other hand, despite accounting for only 5.7% or 3.06 million tonnes of finfish production and 3.8% of total aquaculture output volume, salmonid species generated approximately US$25.7 billion in exports.
While making up a tiny quantity of farmed fish volumes and cultivated in a handful of countries, salmon accounted for 18.1% of FAO estimated US$142.5 billion 2016 aquaculture export revenues, having overtaken shrimp in 2013 as the most valuable traded seafood species. Going forward, with salmon trading at a price floor 100% higher than 10 years ago and shipments by Chile (+250,000 tonnes), Norway (+150,000 tonnes) and other nations collectively 450,000 tonnes in three years, salmonid exports should total near US$31 billion or 18% to 20% of farmed seafood exports in 2019.
Although not captured in the latest SOFIA report's dated statistics, shrimp is in the midst of a strong, though tentative output recovery: Based on the estimates of recent aquaculture conference panelists, 2018 saw farmed shrimp set a new 3.4 million tonne world output record after languishing up to 30% below its 3.3 million tonnes secular peak for many years after 2012.
Going forward, the 4.5% world aqua feed expansion rate of recent years strongly implies that 4% annual aquaculture growth will be "the new normal" during the 2020s. –But large industry disparities and serious longterm issues are hiding behind these conservative sounding industry metrics.
Current top exporters enjoying 10%+ increases in aquaculture and aqua feed production are taking advantage of untapped frontier areas. Former leading exporters with falling aqua feed production ran into sustainability issues soon after running out of new frontier regions and attempting to boost stocking densities. Current top exporters from India to Norway openly wonder if they can stay ahead of nature-based output constraints as the supply of new, frontier production regions dwindles.
Similarly, a simultaneous tripling of aquaculture output and a 50% drop in world fishmeal supplies over the same time is problematic on two fronts. 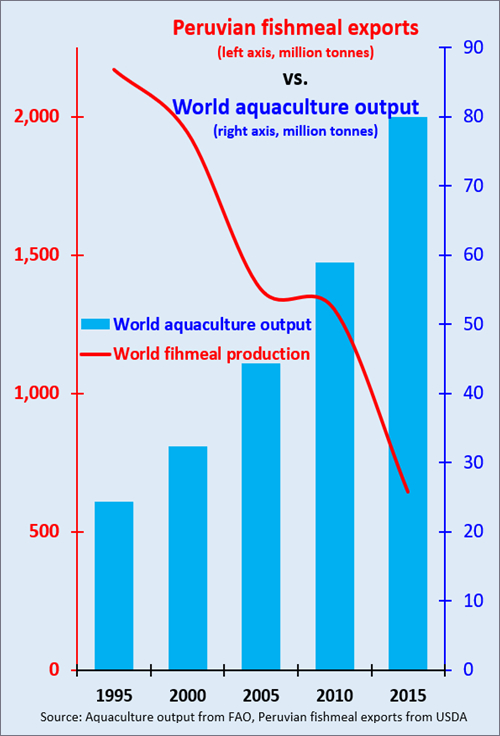 From a technical perspective, research suggests that for some high-value species, rising disease and stocking density problems and a huge reduction in fishmeal feed rations are more than coincidental: The substitution of plant-based proteins in place of fishmeal may have exacerbated the challenge of maintaining optimal fish and crustacean performance amid steadily rising stocking densities and long-term pond waste accumulations.
Reputation wise, the forced removal of fishmeal from feed rations results in falling omega 3 fat levels and skewed fatty acid ratios. Together with antibiotic overuse in lines such as shrimp or tilapia, these
input scarcity based issues threaten to tarnish the reputation of farmed seafood as being healthier to consume than land-based meats.
Aquaculture was designed to enable infinite sustainable growth and transcend the biosphere's hard natural limits on edible fish populations. How ironic then that in ecologically respectful Norwegian salmon farms, technologically sophisticated Thai shrimp farms, and off anchovy-overfished Peruvian coastline, Nature is screaming out the same message: "The moment you run out of frontier cultivation areas, as soon as you boost stocking densities too high, I will constrain you as surely as the oceans did."
In established, mature production regions, re-emerging Nature-based limits to sustainable growth manifest as an inability to achieve output levels taken for granted a decade ago. In many farms across the world, profit maximization requires facing a trade-off between stocking densities, heavy reliance on antimicrobials and the risk of having one's product blocked for food safety reasons.
In commodity markets, input scarcity triggered years of hyperinflation, reversing a 30-year trend of constantly falling prices for value-added lines such as salmon. We now also see a divide between nations where aqua feed production continues to rise rapidly and others where its stagnation or fall reflects an inability to deal with increasingly tight natural capacity limits.
The good news is that even with 4% annual average growth, aquaculture will continue growing twice as fast as any other protein line. The bad news is that as other densely populated Asian nations follow China in testing natural capacity limits, future growth will require prices high enough to stimulate expansion into untapped Latin American and African coastal regions. Over the next decade, this will dilute Asia's near 90% share of farmed seafood production as natural forces increasingly challenge aquaculture's promise of ecologically sustainable, elastic supply expansion.