ICC Brazil was one of the exhibitors at the 20th South Brazil Poultry Symposium (SBSA), one of the biggest technical symposiums on poultry farming in Latin America. 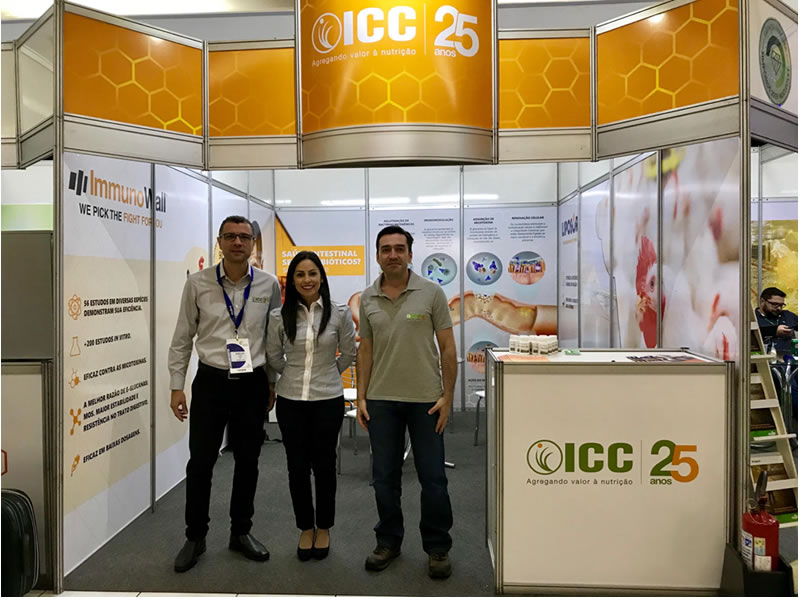 The event, which took place at Chapecó (State of Santa Catarina), at the beginning of April, brought together professionals from Brazil, Uraguay, Paraguay, Argentina, Chile, Peru, Mexico and Bolivia.

According to the Southern Region Commercial Manager, Alexandre Silva, the event was an opportunity to strengthen the brand and to discuss its products. "The event gets bigger every year and is becoming a benchmark in the poultry segment. ICC's growth is evident by the quantity of products it presents year after year," Silva explains, pointing out that the exhibition is a way of testing the market, since companies seek to publicise solutions which they view as representing the current concerns of the production sector.

Over the three days of the event, ICC Brazil presented ImmunoWall® and Liposorb® at its booth. The first product is composed of a high quantity of ß-glucans and MOS genes, ensuring that animals maintain a balanced level of intestinal microbiota and improve their immune system responses, resulting in the reduction of contamination by pathogens. The second is an emulsifier which helps animals digest lipids (fats) in their feed; it also helps the machinery in feed production, optimising factory efficiency and producing pellets which are more uniform in size, as well as improving their quality. About 1,000 people visited ICC Brazil's booth.

Besides Silva, the National Sales Manager Ricardo Barbalho and the R&D Researcher and Analyst Liliana Borges also attended the symposium.