Salmonella is a genus of gram-negative bacteria that is responsible for one of the most frequent global causes of food-borne diarrheal diseases in humans. As a zoonotic pathogen, it is not only a substantial burden on human health; some serovars also have a negative effect on the health of production animals.

The demand to produce food in a safe, sustainable and affordable way is going hand in hand with the request to use less antibiotics during feed production. In this context, the development of strategies that include feed and drinking water additives that can help in improving animal performance and reducing the risk for Salmonella infection, has gained special interest.

The use of these supplements should be part of a holistic Salmonella control program, that entails the implementation of measures at the level of biosecurity, feed production, farm management and veterinary interventions (Figure 1). Within such a program, additives can help to control Salmonella in the feed, in the drinking water, and in the animal itself. 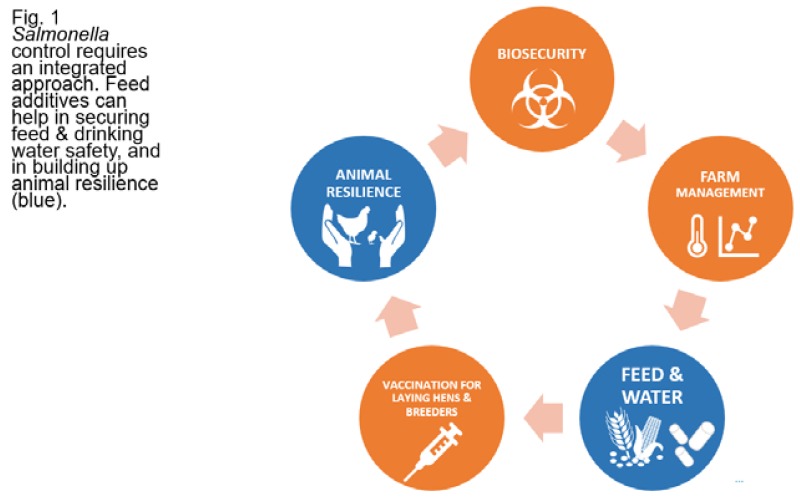 Feed for livestock animals is already long recognized and under increased scrutiny as a vector for pathogenic bacteria such as Salmonella. Due to the complexity to control Salmonella, several measures need to be taken to reduce its contamination, growth and survival, both by physical and chemical methods.

Physical methods include irradiation and thermal processing. The latter is traditionally done via pelleting, and involves treating feed with heat, steam and pressure during a specific duration. In this way, it is only a point-in-time strategy and does not reduce or eliminate the possibility of post-processing contamination.

The inclusion of chemical additives, like organic acids or formaldehyde, either alone or in combination with other mitigation techniques, helps to decrease the risk of contaminated feed. The main difference between the effects of acids and formaldehyde is that formaldehyde kills Salmonella immediately, while acids work slower, but act longer. Usage of formaldehyde in animal feed is nowadays in many countries restricted or even banned as it has been demonstrated to have carcinogenic properties. Moreover, the formaldehyde is very volatile and extremely aggressive, forcing the implementation of protective measures for workers handling the product.

The efficacy of acids depends on numerous factors such as feed composition, moisture level, physical form, the composition and inclusion level of the acid blend and the chemical form of the active ingredients (e.g. pure acids or salts of acids). A novel development is to use a blend of essential oil components or medium chain fatty acids (MCFA) to work synergistically with organic acids.

Adisseo offers a complete range of Salmonella inhibitor products including powdered and liquid formulations to allow Salmonella control in feed raw materials and finished feed. In particular, Salmo-Nil® liquid utilizes a synergistic blend of buffered formic and propionic acid combined with lactic acid that can effectively reduce Salmonella and other pathogen contamination in feedstuffs by slowing down the multiplication or by killing the pathogen. In addition, in the Salmo-Nil Pro® liquid version, organic acids are combined with essential oil components and MCFA that has proved to be more effective in reducing the Salmonella levels at a much faster rate.

After the implementation of good farm and animal management practices, and the treatment of drinking water and feed, the question arises whether any additional interventions are possible within the animal itself. Indeed, it is known that Salmonella can take advantage of a sub-optimal intestinal health status to occupy a niche in the enteric environment and to increase colonization, systemic spreading and shedding. As such, some feed supplements that support gut health will not only improve animal health and performance but can also have the potential to create an intestinal environment that is more resilient to Salmonella growth.

The potential of butyrate, a signaling molecule

Two types of feed supplements that stand out in that respect, are butyrate and probiotics. In the gastro-intestinal tract (GIT), butyrate has evolved as a crucial nutrient signaling molecule enabling the exchange of information between gut microbiota and the host: beneficial bacteria produce butyrate , which triggers gut barrier maintenance and immunological responses that in turn favor these bacteria.

Although butyrate production is high in the hindgut of monogastrics, several cell types alongside the entire GIT are responsive to (low concentrations of) butyrate, resulting in a wide array of physiological mechanisms that can be instigated by butyrate, dependent on where it is delivered in the digestive tract. Of special importance, when it comes to helping in reducing Salmonella pressure, are its ability to trigger the secretion of antimicrobial Host Defense Peptides (HDP's) in the GIT lumen, to decrease inflammation and to downregulate Salmonella's Specific Pathogenicity Island 1 (SPI1) genes, which are needed for host colonization and invasion.

Bringing butyrate where Salmonella is

But butyrate is easily absorbed and metabolized in the first part of the digestive tract, the stomach. Therefore, if butyrate is not adequately protected from gastric absorption it will not be able to elicit effects associated with direct delivery to the lumen of the more distal GIT regions, where Salmonella resides. For example, Sunkara and co-workers (2011) have demonstrated that butyrate can stimulate the production of antibacterial HDP's in explants from the mid-gut (jejunum) and hindgut (caeca), which were isolated from the chickens. However, when unprotected butyrate was fed to broilers in an in vivo experiment, HDP expression was only significantly upregulated in the upper-GIT (crop), and not in the jejunum or caecum. We argue that this observation reflects the delivery of butyrate only in the upper digestive tract, and not as in the lower gut regions.

That is why for Adimix® Precision, a protective fat matrix was developed that is superior in increasing butyrate concentrations in the upper-, mid- and hindgut, as compared to other fat-coated products or butyrate glycerides. We believe that such an in vivo delivery profile is essential to explain the positive results observed with Adimix® Precision in Salmonella infection experiments in poultry (van Immerseel et al. 2005) and in swine (Walia et al. 2016; Lynch et al. 2017).

Probiotics are living organisms that can confer beneficial effect to the host when administered in the right amounts. Depending on the phylogeny of the probiotic strain, it has the potential to exert beneficial effect as a gut health supporting feed supplement in many ways. Bacillus subtilis, for example, is a well-known probiotic species, as it can express a wide variety of metabolites, several of which with the capacity to modulate the gut microbiota, the intestinal barrier and the immune system. In addition, they can be supplemented to the feed as spores, which are able to withstand feed processing at high temperatures.

Shedding light in the black box

Bacillus subtilis can contribute to create an intestinal environment more resilient to Salmonella, for example by reducing inflammation and by secreting metabolites that affect gut bacteria. But the genetic variation within this species is considerable, resulting in profoundly different outcomes when strains are tested for metabolic, antibacterial and anti-inflammatory in vitro. In addition, if the metabolic profile isn't at least partially characterized, and if germination and activation of spores is not documented in vivo, probiotic products are bound to remain a 'black box', which hinders the evaluation of their optimal use and the acceptation by potential users.

Therefore, Adisseo has put much effort in the screening of a bacterial library to select a strain with optimal characteristics: Bacillus subtilis 29784 (Alterion®). Moreover, in a recent study, scientists have been able to visualize germinated active cells of Alterion® inside the gut of birds for the first time. Research like this will be crucial to establish trust in this product and to further investigate its potential providing support to chickens during various production challenges.

From supplements to solutions for animal producers

In summary, tackling Salmonella in production animals to increase food safety requires a multi-faceted approach that involves hygienic measures at several levels along the production chain, including the breeding facilities, feed factories, farms, slaughterhouses and means of transportation. In such an approach, a selection of Adisseo additives can help to fight Salmonella in drinking water, feed and in the digestive tract of animals (Figure 2). 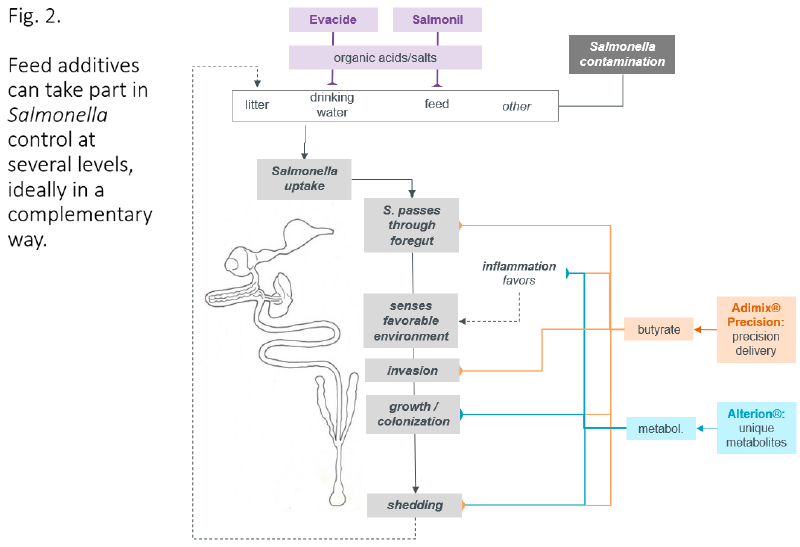 To ensure that these products can be part of a solution for the industry, they must be developed and investigated in a way that secures their maximum efficacy in field conditions. In addition, additive producers should not only discuss the working mechanisms of their products with feed or animal producers, but also their practical applications, cost and return on investment. Only then can we ensure that feed supplements are optimally used to address the challenges and opportunities of the livestock sector and will contribute greatly to animal health and food safety.

Article made possible through the contribution of Edwin Pei Yong Chow, Tim Goossens and Adisseo
Video >
Technical Paper >
Raising the phytase podium
Phytate is the main storage form of phosphorus in all grains, which represent the basis of most plant-based diets used in animal production. To improve phosphorus availability and ...
Exogenous enzymes as zootechnical additives in animal feed: A review
Enzymes are widely used in the food industry. Their use as a supplement to the raw material for animal feed is a current research topic. Although there are several studies on the a ...
The evolution and application of enzymes in the animal feed industry: the role of data interpretation
Enzymes have been used commercially for nearly 40 years and save significant costs through sparing of expensive nutrients but the mechanism by which this is achieved is still debat ...