Evolution of Biosecurity from the anecdotal approach, to application of the scientific method towards a total culture change

Evolution of Biosecurity from the anecdotal approach, to application of the scientific method towards a total culture change

Agriculture is one of the easiest sectors of the economy to disrupt and is vulnerable to natural orintentional threats. In livestock agriculture, due to the globalization of food production, intensification and concentration of animals in larger farms the need for improved biosecurity has become unavoidable.

In Great Britain, a foot‐and‐mouth disease epidemic in 2001 and an outbreak of bovine spongiformencephalopathy (BSE, also known as mad cow disease) that peaked in 1992 cost the country billions ofdollars in livestock losses and limited export capabilities.  Industries that support livestock (feed, fencing, pharmaceutical, veterinary, etc.) were also heavilyaffected, and there was a negative effect on tourism. Both of these disease events were unintentionalbiological disasters. More recently, the swine industry has been rocked by two major epidemics. One was the geographical spread and increased severity of Porcine Epidemic Disease virus (PEDv) in Asia and North America. The other, African Swine Fever (ASF) started in 2007 with outbreaks in the Republic of Georgia that were spread though people to other parts of the region initially. EventuallyASF spread to China and many other countries in South East Asia and Europe, probably by illegal movement of infected pork meat.

In modern swine production a high level biosecurity is a must, not only for farms located in pig dense areas with high infection pressure, but for all farms due to the fact that they frequently receive, and deliver biological material (i.e. animals and feed). A lot of research projects have been dedicated to demonstrate how viruses, for example PRRS virus PED virus or ASF,  are shed from pigs, and transmitted between farms. This has led to a common understanding of the critical importance of good external biosecurity, to avoid introduction of new viruses, with high focus on clean transports, separate and clean load out areas, downtime for visitors etc (Biocontainment).

When it comes to internal biosecurity, and especially farm management and pig flow, the implementation of preventive measures is also necessary. As it is difficult to change the location of a farm, internal biosecurity, pig flow and management become even more crucial, in order to prevent internal transmission of pathogens like PRRS, Influenza or Salmonella.

Table 1.  Summary of some of the many areas that can affect disease entry and dissemination on pig farms. 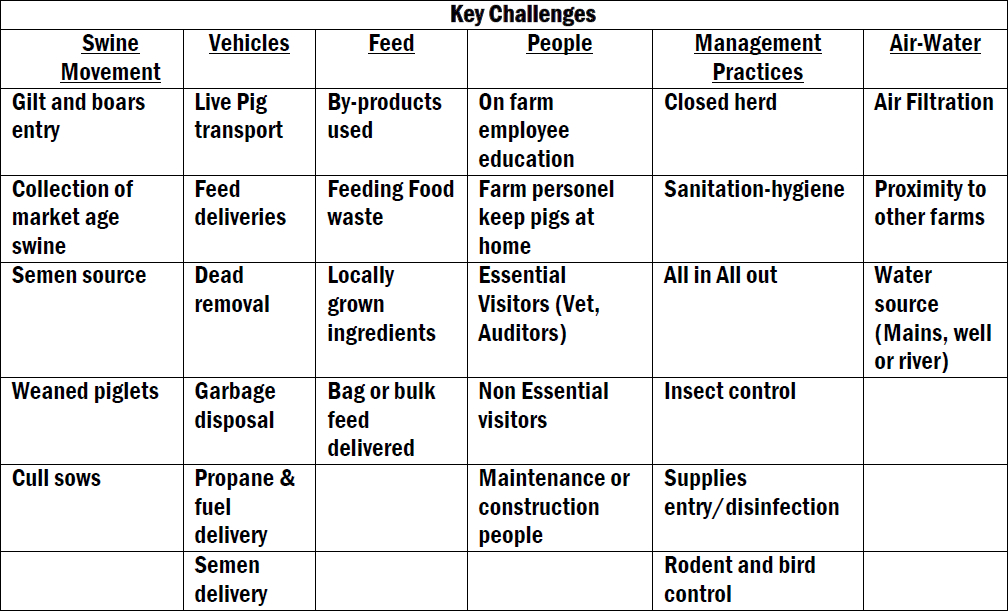 In Asia, one of the key common loopholes of biosecurity systems are vehicles. While farms are strict (and getting stricter) on people who go in and out of the farm, delivery vans and animal transport trucks freely go in and out of the clean and dirty area with none or inappropriate disinfection facilities. The most commonly usedsystem; disinfectant tire dips at the entrance to a farm, are often left exposed to direct sunlight or rain and not properly maintained. Cleaning and disinfection of animal transport vehicles between farms is almost non-existent, with just some few exceptions. Feed biosecurity is the second most common culprit in Asia, with the challenge of usingfeed bags(which are often reused and can be contaminated) rather than feed bulk deliveries. Use of animal-derived protein, also losing popularity, still remains a dangerous option in feed ingredients. The presence of backyard farms(sometimes feeding food scraps), more as keeping a tradition than a way of living, is the third biggest challenge in the region. It is also in this sector where Veterinary advice and animal health programs remain difficult to come by.

Due to highly populated regions in many parts of the world were people and livestock co-exist, governments create zoning of areas for urban or agricultural use. In the process, most farms need to "fight" for land and co-exist in designated areas. As such, the distance between farms are an epidemiologist's nightmare. The first impulse, is to create high walls, but in-farm roads remain common and bodies of nearby natural water source are shared.

In these cases, the application of Area Regional Control (ARC or ARC & Elimination) programs are usually the ideal means of Bio-management.

Figure 1.  An actual farm aerial view showing Farm X nearby a swine and poultry farm to its west sides 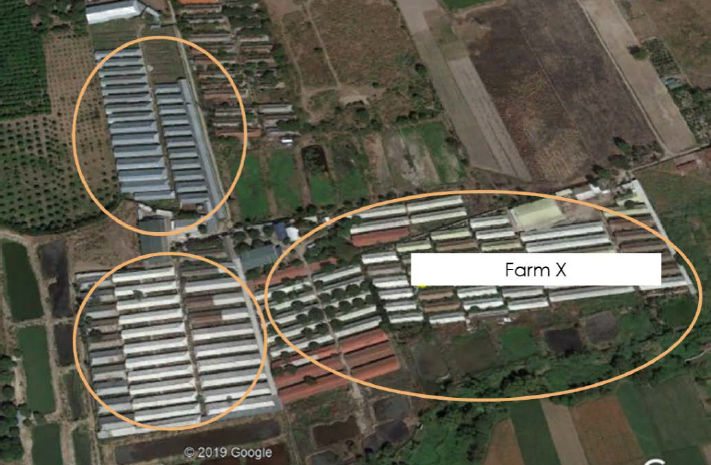 Evolution: The Tools of Biosecurity

Disease control is based on three pillars; Prevent infection, maximize immunity and minimize exposure. Biosecurity is only one aspect of the entire animal health arsenal. The development of policies and protocols have now metamorphosed into simple yet effective Apps and checklists to assure that the risks are understood and then mitigated.

One of the foundations upon which prevention, control and eradicationof diseases is identifying and controlling internal andexternal risks factors for introduction and spreading of pathogens intothe farms. One of the earliest systematic approaches was PADRAP (Production Animal Disease Risk Assessment Program) whichwas developed to support evaluation and management of risks that are predictive of clinical PRRS episodes on individual farms. A correlation between lower scores and lower occurrence of PRRS outbreaks was demonstrated in US production systems.

The systematic collection of risk evaluations allows for benchmarking the different production sites. For example, in Spain 91 sow farms completed PADRAP on-line between 2014 and 2015 to assess the current biosecurity status. The results werecompared to other swine farms round the world in thePADRAPdatabase, mainly in the US. This study found that several farms were above the global median scores and the dispersion was very high, indicating that increasing efforts to improve biosecurity in farms with high scores, mainly in high pig density regionswas needed.

More recently, to help farmers and vets to evaluate and improve the level of biosecurity, pig flow and management procedures, Boehringer Ingelheim has developed the Comprehensive Online Management and Biosecurity Assessment (COMBAT) tool focused on the evaluation of risks of introduction and spread of PRRS on farms. The tool is an APP based on fast and easy questionnaire of 55questions covering External, Internal, Location and Management risks.COMBAT questions can be answered directly in the application (COMBAT App). The relative risk of not being able to prevent, control or manage a PRRSV infection is calculated in 4 different categories: Internal risks, External risks, Location risk, Management and pig flow risk (all related to 10 Golden Rules for PRRS control). The weighted risk is calculated based on published literature and previous risk assessments carried out by BI Veterinarians. The risk evaluation output can be visualized in a bubble chart.This tool allows pig producers to evaluate areas for improvement and benchmark against other farms. The aim of the tool is to identify the most important risk parameters related to PRRSV by highlighting the areas of risk and correcting high-risk practices.  This tool can be incorporated into the 5 Step process by analyzing the system constraints, in a holistic PRRS control program.

Based on the same approach Boehringer-Ingelheim has also developedASF COMBAT, a 35 item App based questionnaire that focuses on risks associated with ASF covering 6 aspects of Biosecurity including People, Animal, Location, Management, Feed and Transport.

We often think of biosecurity tools as something inanimate and static. In reality, the development of Biosecurity sensors and devices is a growing trend.  Dynamic, real time systems to restrict access to sites, track movements of people and objects within and between farm or visualize high risk areas (CCTV) are allowing biosecurity to move to another level.  For example, recently pTRACK a beacon and tracker based system allows farms to document high-risk movements in the farm and implement interventions and training of farm staff to reduce risks of internal transmission.

Also growing is the ability to detect pathogens at the farm level with new technologies (Point of Care diagnostics) which allow reliable testing to rapidly detect new pathogen entries and set up control interventions.

Figure 2.  The use of Closed Caption Television (CCTV) in strategic locations in a farm is a new trend in farms today (photo courtesy of Dr. Tom Gillespie) 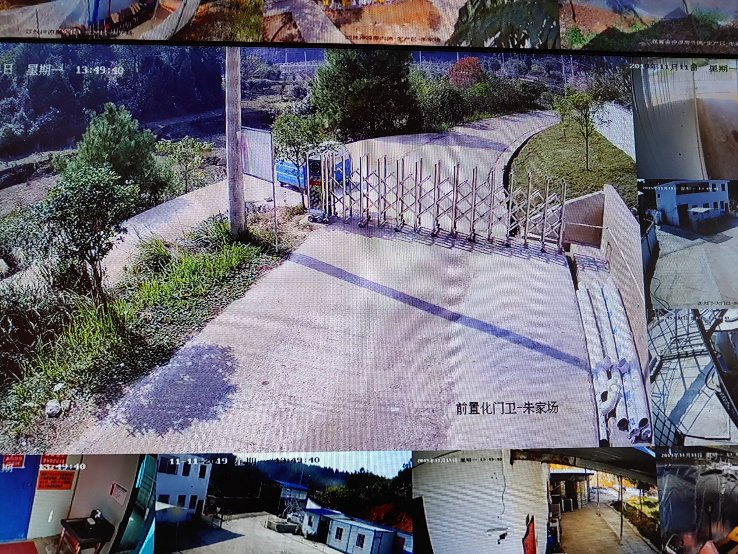 From Standard Operating Procedures to Creating a Biosecurity Culture

Because the risks of bringing new disease agents onto the farm do not go away and daily behaviors and actions continuously provide opportunities for breakdowns it is essential that all the personnel involved in pork production are aware of the risks.More importantly, they need to understand how they can mitigate them. Creating specific job profiles focused on biosecurity is also one trend that is helping increase the awareness and implementation of Biosecurity in Farms. However, this alone is not enough.

Prevention of disease entry requires more than a biosecurity manual or Standard Operating Procedures for the production system.  Successful swine operations require people at all levels that are motivated,educated in biosecurity and diseases and open to continuously review current practices and make improvements. New infectious challenges arise every year, as SARS COV 2 has demonstrated.  This requires a culture of biosecurity.

In the ground-breaking book "The Oz Principle" Connors, Smith and Hickman detail how individualsand organizations can become successful once they have adopted a culture of individual accountability.  The use of tried and tested excuses like "no one told me what to do" "that's the way we have always done it" "I'm too busy to do it" will not protect the farm from an outbreak.  They talk about behaving"above the line" a concept that is very applicable to create a biosecurity culture (see it, own it, solve it, do it).  Behaviors like cover your tail, wait and see, tell me what to do, finger pointing or it is not my job (below the line accountability),which we witness commonly on farms,will not allow a pig production system to prevent the introduction and spread of pathogens. This remains a huge challenge for many production systems around the world.

As global trade increases, so does globalization of diseases. We have seen that first hand with the COVID-19 situation. Swine production is not immune to this trend. As countries continue to trade, Transboundary diseases will increase. The challenge in the past of just farm-to-farm transmission will now be country-to-country. It is up to all the stakeholders to band together and form National, Regional and even Global Biosecurity policies to prevent or mitigate this risk.

Article made possible through the contribution of Boehringer Ingelheim