Many stressors are associated with intensive rearing practices in poultry production systems, one of which is mycotoxins. Mycotoxins are natural toxic secondary metabolites produced by fungi that can be found in feedstuffs such as cereal grains and their by-products. These compounds can negatively affect livestock through direct and indirect effects (1, 2). Mycotoxins can occur prior to harvest, as well as after harvest, transport and storage. Once these metabolites are formed, they are chemically stable and continue to persist in the contaminated ingredient even after becoming a finished feed. Although mycotoxins can occur individually, contamination with multiple types of mycotoxins on a single feedstuff source tends to occur more frequently (3–5). The exposure of birds to multiple mycotoxins increases risk through additive or synergistic interactions (6–8).

The effects of mycotoxins on the laying bird

Mycotoxin effects can vary depending on species, health status, age, exposure time, mycotoxin type and concentration. Consumption of mycotoxins can affect any system in the body and potentially cause lesions and clinical signs. Common types of mycotoxins that affect poultry through feedstuffs are aflatoxins (AF), ochratoxins (OTA), fumonisins (FUM), type B trichothecenes — such as deoxynivalenol (DON) and zearalenone (ZEA) — and type A trichothecenes, which include T-2/HT2 toxins (9). However, further advances in mycotoxin research indicate that the interactions between mycotoxins and the role of lesser-known mycotoxins have a greater impact on animal systems than previously thought(10). As a result, the effect of mycotoxins can be quite complex.

Mycotoxins can modify DNA and RNA and hinder protein synthesis, which has the potential to be mutagenic, embryotoxic, teratogenic and carcinogenic (8, 11). In broiler breeders and egg layers, profitability greatly depends on the quality of the egg, including fertility and hatchability. Mycotoxins such as AF, OTA, trichothecenes, moniliformin, ZEA and FUM have been found to be toxigenic to egg production and quality (10, 12, 13). Eggshell integrity, particularly eggshell thickness, shape, color, texture and cleanliness, can be affected by mycotoxins (14). Some mycotoxins act directly on pathways that affect quality, while some act indirectly. For example, AFB1 can directly affect the eggshell by inflicting hepatic damage and thus decreasing vitamins, minerals and enzymes involved in eggshell formation (10). Indirectly, T-2 toxin and other trichothecene mycotoxins can cause eggshell quality issues through a reduction in feed intake, which could lead to a decrease in available nutrients needed for eggshell formation and an overall drop in egg production (10, 12, 15, 16).

Although eggshell quality may be crucial for table egg layers, it is also important in broiler breeders, as the shell is involved in gas exchange and provides a natural barrier from the outside environment to keep pathogens from translocating into the egg (17). An increased number of cracks and thinner eggshells can harbor harmful pathogens that could be introduced into the incubators and increase the number of exploders, contaminating the rest of the batch with bacteria. Mycotoxin exposure from litter bedding systems is also critical. Studies show shifts in the gastrointestinal microbiota by mycotoxins, which can influence the number of dirty eggs and potentially translocate harmful pathogens into the hatchery and the progeny housing (5). Additionally, the presence of fungi and mycotoxins can further increase during egg storage, particularly if exposed to high humidity and temperatures, which is ideal for fungal growth. Research shows that, under these conditions, there is potential for translocation of fungi into the egg (5).

Fertility and hatchability can be affected by mycotoxin exposure (12, 18, 19). Effects are not restricted to female fertility, as male birds also show signs of dose-dependent infertility (18, 19). In males, mycotoxins such as diacetoxyscirpenol (DAS) can reduce reproductive organ weights and cause degenerative processes of the testis, which leads to reduced spermatozoa quality and an overall diminished in semen quality (19). Furthermore, hatchability may be impacted simply due to changes associated with the chemical composition of the egg and not with sperm storage in the hen.

Mycotoxin carry-over effects on the progeny

Although the mechanism of action for early embryonic death is not completely understood, one theory relates to the thickness of the eggshell, which affects gas exchange and allows for moisture loss during incubation(13). Additionally, mycotoxins can accumulate in tissue and fat and eventually reach eggs (20). Components to poor hatchability are the embryotoxic and teratogenic effects of mycotoxins on chicken embryos. Mycotoxins such as FUM are known to affect sphingolipid and enzymatic metabolism, particularly those related to the development of the embryonic chick brain (8, 11). Observed early embryonic death lesions are associated with hydrocephalus — abnormal neck and beak formation (11, 21). Other pathological changes, such as tissue enlargement and hemorrhages, can be observed in the heart, kidneys, muscle, lungs, intestines and testes. Incomplete closure of the umbilicus has also been reported in similar studies (21, 22).

Mycotoxins are well known for their properties as immunosuppressive agents (23). Immunosuppression is a key concern, particularly in poultry production systems, where immune function plays an essential role in maintaining overall health and welfare while improving performance and preserving profitability (24). The progeny of breeders exposed to feed-borne mycotoxins show a higher incidence of unthrifty and immunosuppressed chicks (18). Breeders exposed to AF and OTA are reported to have chicks with decreased cellular and humoral responses (25).

How to manage mycotoxins: Testing and mitigation techniques

Prompt recognition of mycotoxin contamination is vital for minimizing risk. Routine testing of feeds and feedstuffs for mycotoxins by approved methodology can assist in mycotoxin detection. Both assessment of individual mycotoxins, such as with Alltech® RAPIREAD, or more advanced assessment such as Alltech 37+® that provides results of multiple-mycotoxin contamination, can help producers and nutritionists understand mycotoxin challenges. Furthermore, investigation of internal damage within the bird can also be performed, as pathological changes can suggest the presence of mycotoxins. However, these are not always definitive.

Currently, several forms of intervention can be applied to the feed to mitigate the effects of mycotoxins in the body and from potentially going further down the chain into the eggs and the progeny. Adsorbents such as Mycosorb A+® that contain glucomannans extracted from the outer cell wall of yeast can physically bind mycotoxins and help to limit them being absorbed from the gastrointestinal tract (26, 27). Dietary additions of these adsorbents have shown to be very practical in animal production systems to reduce mycotoxin effects (Figure 2) associated with performance losses (13, 28-30).

The impact of mycotoxins on poultry is complex. Whereas sometimes clinical mycotoxicosis is evident, chronic exposure may not be clinically obvious. Subclinical mycotoxicosis is thought to be a common occurrence in production, but diagnosis can be difficult. However, the ramifications of contaminated feed and bedding materials used in poultry production systems can be detrimental to achieving optimal performance, animal welfare and profitability. In birds such as broiler breeders, realistic mycotoxin contamination doses may decrease egg production and shell quality and increase embryonic mortality without having clear effects on the breeder. Their impact on laying-type birds and their progeny should be considered when establishing a mycotoxin reduction program. Understanding the direct and indirect implications of mycotoxins, in addition to testing of feed materials, helps to better diagnose the issue. Furthermore, adsorbents that manage the risk of multiple mycotoxins simultaneously should be used to mitigate the clinical signs associated with mycotoxins and potentially help maintain good egg production and decrease the risk of carry-over to the progeny. 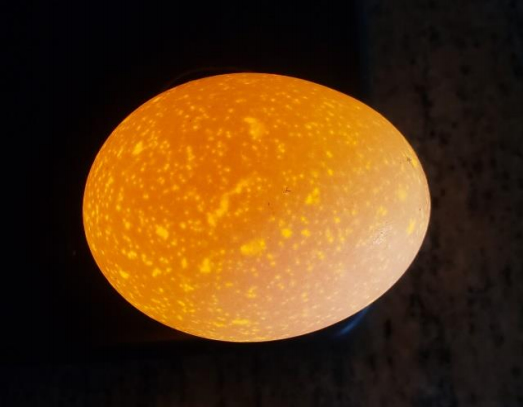 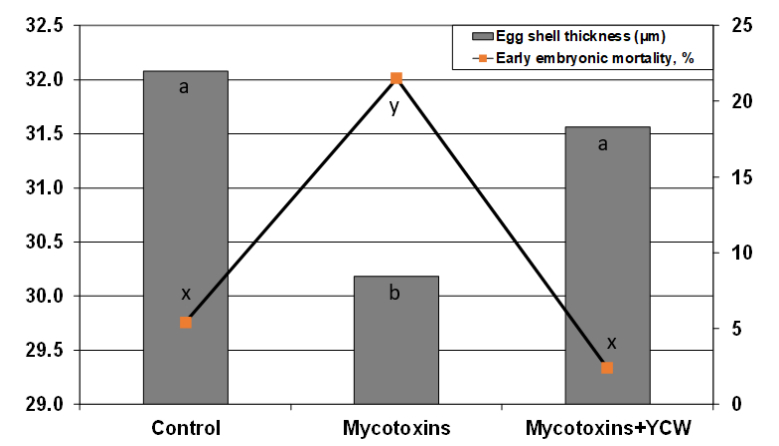