Possibilities for the biological control of mycotoxins in food and feed

Possibilities for the biological control of mycotoxins in food and feed

Abstract:  Seeking useful biological agents for mycotoxin detoxification has achieved success in the last twenty years thanks to the participation of many multidisciplinary teams. We have recently witnessed discoveries in the fields of bacterial genetics (inclusive of next-generation sequencing), protein encoding, and bioinformatics that have helped to shape the latest perception of how icroorganisms/mycotoxins/environmental factors intertwine and interact, so the road is opened for new breakthroughs. Analysis of literature data related to the biological control of mycotoxins indicates the ability of yeast, bacteria, fungi and enzymes to degrade or adsorb mycotoxins, which increases the safety and quality of susceptible crops, animal feed and, ultimately, food of animal origin (milk, meat and eggs) by preventing the presence of residues. Microbial detoxification (transformation and adsorption) is becoming a trustworthy strategy that leaves no or less toxic compounds and contributes to food security. This review summarizes the data and highlights the importance and prospects of these methods.

Mycotoxins are secondary metabolites synthesized by an array of fungal genera, usually Fusarium, Penicillium and Aspergillus. They are natural contaminants which commonly occur in food and feed and pose a threat to animal and human health. These hazards contaminate agricultural commodities either directly or they reach animal tissues, milk and eggs through a "carry-over" mechanism after feeding animals with contaminated feedstuffs [1,2]. From regulatory and food safety viewpoints, the most significant and prevailing types of mycotoxins are aflatoxins (AFs), zearalenone (ZEA), fumonisins (FUMs), trichothecenes (TCT) (deoxynivalenol (DON), T-2 toxin (T-2) and HT-2 toxin (HT-2)), ochratoxins (OTA), ergot alkaloids (EAs), patulin and citrinin. If these substances are present in a particularly high amount in feed and food, or in lower dosages but over a long period of time, they can cause a variety of adverse effects, from acute to chronic, both in humans and animals (Table 1).

The economic ravages induced by mycotoxins are based on increased veterinary and human health care costs, decreased livestock production, expenses of contaminated food and feed disposal, research investments and implementation of different mitigation measures to reduce the severity of mycotoxin problems, and even the possibility of fatal outcomes [8]. The World Health Organization (WHO)—International Agency for Research on Cancer (IARC) evaluated the carcinogenic potential of AFs, OTA, TCT, ZEA, and FUMs [9,10]. Escola et al. [11] emphasized that mycotoxin occurrence above the detectable levels worldwide was up to 60–80% and that even low presence should not be neglected as common mycotoxin mixtures, due to their synergism, could induce combined adverse health effects. Based on their detrimental effects on humans and animals, mycotoxin limits in several food and feed commodities have been prescribed by different national and international regulations. Nevertheless, as noted by Mastanjevic et al. [12], certain updates on legislation have to be made to provide for the health of animals and, subsequently, humans.
Mycotoxin presence in feed and food is an issue of growing concern worldwide, especially as the planet is facing the emerging effects of climate change [1]. Based on the results of the investigation of milk samples routinely used for human consumption, Mehta et al. [13] suggested a need for steps to be taken to control potential contamination of animal feed and thus to mitigate mycotoxins concentration in milk. A similar conclusion was raised by Souza et al. [14] who established good analytical methods in order to contribute to suppression of the transfer of unwanted compounds from feed to milk. The importance of laboratory control and the improvement of monitoring tests are emphasized within the work of Moradi et al. [15] considering T-2 toxin detection, or Su et al. [16] in relation to the level of DON contamination of barley and the possibility to sort the grain into different classes accordingly.
During the decades-long struggle with mycotoxin problems, many treatments have been tried: from physical, through chemical to biological. For instance, Horkey et al. [17] concluded after their investigation of effects of fungicides on mycotoxin occurrence in barley that they are partially successful and able to suppress some toxins, while not others. However, it is not just grains that are affected. The green plant mass is also at risk, as well as silage. That is why reliable solutions are being sought for these matrices as well [18,19]. Various methods have been implemented to ensure decontamination of affected commodities or to diminish the exposition to mycotoxins, but not all strategies are suitable for different purposes [20,21]. The approach based on biological agents is very promising in terms of efficiency and specificity, with the positive impact on the environment, food safety and food security. Therefore, the aim of this paper is to summarize the main achievements in this viewpoint as schematically presented in the Figure 1. 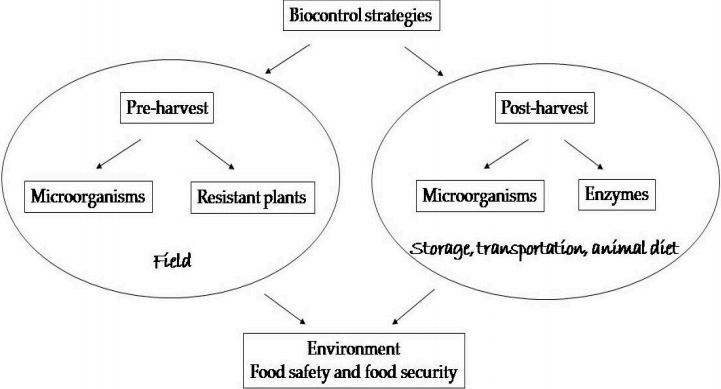 Article made possible through the contribution of K. Nešic et al.

Video >
Technical Paper >
What poultry producers should know about endotoxins
Effective endotoxin management is a crucial task for poultry producers, allowing them to safeguard their animals' health and productivity. In this second part of our two-part s ...
Mycotoxins in poultry: A hidden factor affecting flock health
The immune system is constantly under siege by different stressors. Stress, whether from disease or environmental factors, plays a critical role in the overall health and well-bein ...
Immunomodulatory effects of heat stress and lipopolysaccharide on the bursal transcriptome in two distinct chicken lines
Transcriptome analysis identified genes and pathways involved in bursal responses to heat stress and LPS and elucidated that these effects were greatest in the combined treatment. ...