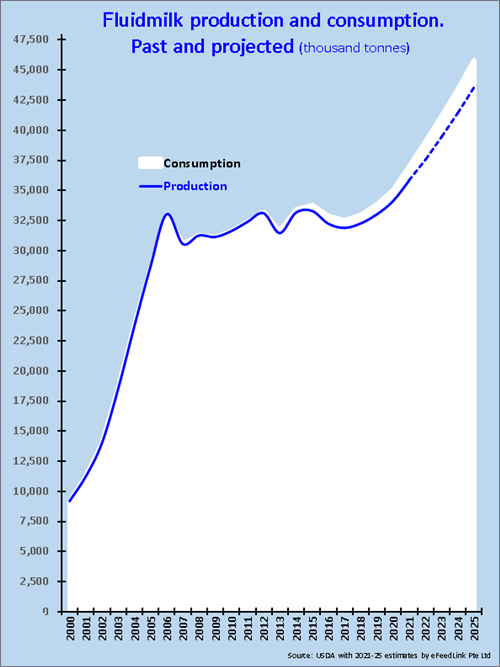 Enduring a decade of stagnation after 2008's melamine contamination crisis, the worst seems to finally be over for China's beleaguered dairy sector. Rising 16.5% annually and jumping from 9.2 million tonnes in 2000 to 32.3 million tonnes in 2008 (when the milk in melamine scandal broke), fluid milk output only increased 0.2% annually in the nine years to 2017.
As the accompanying chart shows, from 2008 through 2019 inclusive, China's fluid milk output stayed on an undulating plateau of 31 to 33 million tonnes, thereafter growing a mere 2.3% yearly annually from 2017 to 2021.
Demand-wise, milk output stagnated for a decade but China's economy, personal incomes, and dairy consumption kept rising. As a result, from less than 6% in 2008, imports now account for approximately 33% of China's dairy consumption: In fluid milk terms, 2020 dairy consumption was equivalent to 51 million tonnes, of which 17 million was imported –an eight-fold increase in just 12 years.
The quality and character of imports also evolved. China first became a world-leading importer of commodity milk powders and infant milk formula. Later of fluid milk, cheese, yogurt, and other processed, high-end dairy goods. In 2020 for the first time, revenues from yogurt exceeded the value of fresh milk sold.
The quantity and sophistication of China's dairy demand have both increased, a supply-side revolution is also underway. Despite COVID-19's severe economic disruption, fluid milk output grew 3.3% in 2020 and is projected to increase 4.7% in 2021 (to 35.7 million tonnes). From 2021 through 2025 inclusive, Chinese government estimates expect 6% annual fluid milk output increases; even eFeedLink's more conservative forecast projects 5% annual growth.
This sudden improvement in dairy fortunes reflects ten years of investment in consolidation and technology. No matter what metric one examines, we see a transformed, increasingly competitive sector poised to embark on decades of solid, sustained growth.

2008's melamine contamination scandal was followed by years of countless milk safety scandals that were only publicized in China itself. Small farms with 5 or fewer cows held back productivity and accounted for most post-2008 dairy food safety scandals. To remedy this, government subsidies encouraged and accelerated industry consolidation.
Policymakers encouraged the acquisition of dairy farms by large processors who had an interest in high-quality milk. After 2015, waste management laws forced small farms that couldn't afford pollution abatement technology to abandon dairy farming or sell out to larger-scale integrators.
Consequently, in 2008, China had 2.6 million dairy farms averaging fewer than 5 cows; many of them still milked by hand. This fell to 1.3 million farms by 2016, and 660,000 farms with an average of 18 cows per farm in 2018. 60% of cows were milked by hand in 2007 but 99% were mechanically milked by 2018.
A shrinking number of large-scale dairy farms and processors made it easier for policymakers to enforce strict, new food safety laws. Reports of dairy food safety scandals tapered off after 2015, as China's top three dairy companies currently own approximately 6 million of China's 13.9 million milk cows and account for 50% of dairy consumption.
An oligarchic industry structure is emerging, consisting of a few large producers with ample funds to invest in leading-edge technologies that smaller producers could not afford. By 2022, there will remain fewer than 500,000 dairy farms with an "average" of 30 cows per farm –but this is skewed by the fact that half China's dairy cows are now in herds of 500 hundred or more and owned by fewer than five companies.
Compared to 2007, 82% fewer farms produced 11.6% more milk in 2020. Economies of scale and unit cost reductions gained from this consolidation offset high feed costs, scarce forage, and rising farm wages that place Chinese dairy farms at a competitive disadvantage to western dairy exporters.
Leveraging their large capital pools, integrators imported productive dairy breeds in place of traditional cattle, feeding them imported high-quality feed in place of traditional farm scraps. These measures were implemented alongside the importation of modern farm management techniques, efficiency-boosting supplements, and clean, well-ventilated cattle housings.
As a result, from 3.8 tonnes/year of milk in 2010, China's average 2020 dairy cow productivity is approximately 7.0 tonnes/year, with top integrators achieving 8 tonnes/year. Compared to China's 84% increase in dairy cow productivity, US dairy cow productivity increased 9.3%, from 9.7 tonnes/year in 2010 to 10.6 tonnes/year in 2020.
Thanks to all these changes, we expect from 2021 through 2025 inclusive, fluid milk output to expand 5.0% annually, while milk demand increases by 5.5%. A narrowing gap between milk supply and demand will cause import volumes to grow far more slowly than before.
Led by high volume, low-cost dairy powders, total import volumes of WMP, SMP, butter, cheese, and milk rose 53% yearly from 2008 through 2014. After 2014's dairy market crash, imports increased only 8.5% yearly through 2020. Demand growth shifted from high volume, low-cost dairy powders to fluid milk and high-end goods such as butter and cheese. Post-2014 imports of expensive fatty goods skyrocketed, their internationally traded volume a fraction that of dairy powders. As a result, import volume growth fell by much more than import value.
WMP and SMP imports total over a million tonnes but rising domestic milk self-sufficiency will limit 2021-25 annual dairy powder import growth to 2.0% to 2.5%. With milk quality rising and imports already accounting for a large part of the consumer market, fluid milk import growth will decelerate to 3.5%.
Powered by growing demand for fast food and western food products, fatty dairy good imports such as butter and cheese will continue rising by more than 10% annually. However, as they account for 10% of import volumes, overall dairy imports will only rise 4% annually through 2025.
That is still several times faster than the growth of China's population and enough to maintain its leading position in the world dairy trade. But from here on in, the story will shift from China's impact on the world dairy trade to its flourishing domestic production.