where 't' is the age of the animal (days of age), 't_start' is the time (days of age) when the perturbation starts, 'CFI(t)' and 'Target_CFI(t)' are the CFI and the target CFI (kg) at day 't', respectively, and 'Target_CFI(t_start)' is the target CFI at day 't_start'. The shape of the response of the resilience mechanism is different in the modified procedure compared to the original procedure. In the original procedure, the resilience capacity of the pig during the perturbation becomes progressively bigger (grey curve of figure 2 in Nguyen-Ba et al., 2020), whereas in the modified procedure the resilience capacity causes a constant increase in DFI during the perturbation (Figure 1).
Pigs in the group DD received the DON challenge twice. Each perturbation was modelled with independent resistance and resilience mechanisms as shown in Figure 1. Equations are described as:

where 'Perturbationi (t)' is the dynamic change in CFI at time 't' when the pig responds to a perturbation i (i = 1 and i = 2 correspond to the first and second DON challenge, respectively) and 'Ratioi (t)' represents the ratio associated with perturbation i as described in equation (1). Target_DFI(t) represents the target trajectory curve of DFI. Changes in DFI (relative to the target DFI) in the response to each DON challenge depend on the dynamic effects of 'Perturbationi (t)'. The sum of the changes relative to the target DFI results in the actual DFI as:

The value of Perturbationi (t) will be negative during the period of the perturbing factor and positive thereafter. The independence of the mechanisms of disturbance and recovery means that an animal may be recovering from the first challenge (through compensatory DFI) while, at the same time, it is affected by another challenge resulting in a reduction in DFI.

Figure 1 Change in daily feed intake (DFI) of a pig in reponse to receiving a diet contaminated with deoxynivalenol (DON) in two periods. Black lines = response mechanisms. The target DFI corresponds to no change in daily feed intake (grey line). Values smaller than 0 indicate the effect of resistance mechanisms and values greater than 0 indicate the effect of resilience mechanisms. The left panel (a) illustrates the response mechanisms where the reduction in DFI during the perturbation (k1) is counteracted for by a resilience mechanism (k2, the proportional change in DFI relative to the ratio between the actual cumulative feed intake and the target cumulative feed intake), which results in an attempt for compensatory feed intake (k4). The right panel (b) illustrates the actual change in DFI. The k3 corresponds to the difference between k1 and k4. During the second perturbation, the actual DFI is the result of the constant resistance and resilience mechanisms of the second perturbation and the declining resilience mechanism of the first perturbation.
Because the change in DFI is constant during the period when the DON-contaminated diets are distributed, two other traits were estimated. The constant reduction in DFI during the DON challenge resulting from the resistance and resilience mechanisms can be calculated as k3 = k1/(1 + k2). Likewise, the instantaneous increase in DFI once the feeding of the DON-contaminated diet stops is given by k4 = k1 × k2/(1 + k2).
In the original procedure, all four parameters of the perturbation model (t_start, t_stop, k1 and k2) were estimated. With the current dataset, it appeared difficult to estimate all these parameters, because the period of distributing the DON-contaminated diet lasted only 7 days. For group DD, this would require the estimation of 11 parameters and, with 55 DFI observations, this can easily lead to an overparameterisation of the model. It was therefore decided to fix t_start and t_stop at the start and end times of the distribution of the DON-contaminated diets.
Statistical analysis
Parameter estimates for the target CFI and results from the B-spline functions were compared among the four groups to evaluate the capacity of the procedure to detect perturbations. The quantification of the response to DON challenges was carried out in the three challenged groups (i.e., DC, CD and DD). Since the parameters t_start and t_stop were fixed, only the resistance and resilience parameters were estimated. The k3 is the constant reduction in DFI during the perturbation and is easier to interpret than k1. The model was therefore parameterised to estimate k2 and k3, and k1 and k4 were calculated from these parameter estimates.
All statistical and modelling procedures were performed using R software version 3.6.1 (http://cran.r-project.org/). The optimisation was performed by the non-linear function 'nlsLM' of the package 'minpack.lm'. To characterise the pig's response to a perturbation, equations (2b) and (3) were solved using the 'ode' function of the 'desolve' package with an integration step size (dt) of one day. The optimisation was done using the 'optim' function. Statistical comparison was carried out using a one-way ANOVA test (the R base function 'aov'). Pearson correlations between parameters were calculated using the R base function 'cor'. In all analyses, differences were considered as statistically significant if P < 0.05 and as tendencies if P < 0.1.
Results
Estimation of the target cumulative feed intake and detection of perturbations
The estimated parameters of the target CFI (t0, CFImid-point and CFIlast) and the average daily feed intake (ADFI) were compared among the four groups (Table 1). No significant differences were found in the parameter estimates of the target CFI among the four groups.
In general, the procedure detected deviations in the CFI for all groups, even in group CC. However, the magnitude of the deviations in group CC was very small. Multiple deviations identified by the procedure indicate that the CFI of pigs was affected by factors other than by the DON-contaminated diet alone. As the objective of this study was to quantify the response of pigs to DON challenges, only the deviations related to DON-challenged periods were examined. The identified deviations are shown in Figures 2 and 3, respectively, for the start of the deviation and for the time at which the maximum difference between the CFI and the target CFI occurred. The procedure identified that most deviations started and reached the maximum value near the distribution of the DON-contaminated diet. However, there were cases where the starting time and the time of the maximum deviation between the CFI and the target CFI were before or after the distribution of the DON-contaminated diet, especially for group CD.
Table 1  Estimated model parameters of the target trajectory of cumulative feed intake of pigs that received a diet with or without deoxynivalenol (DON)-contaminated cereals 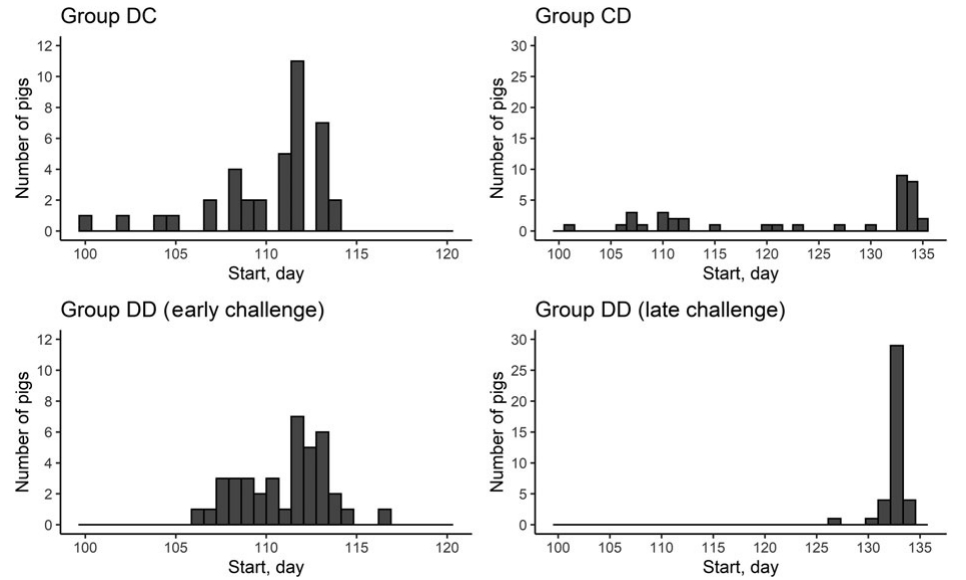 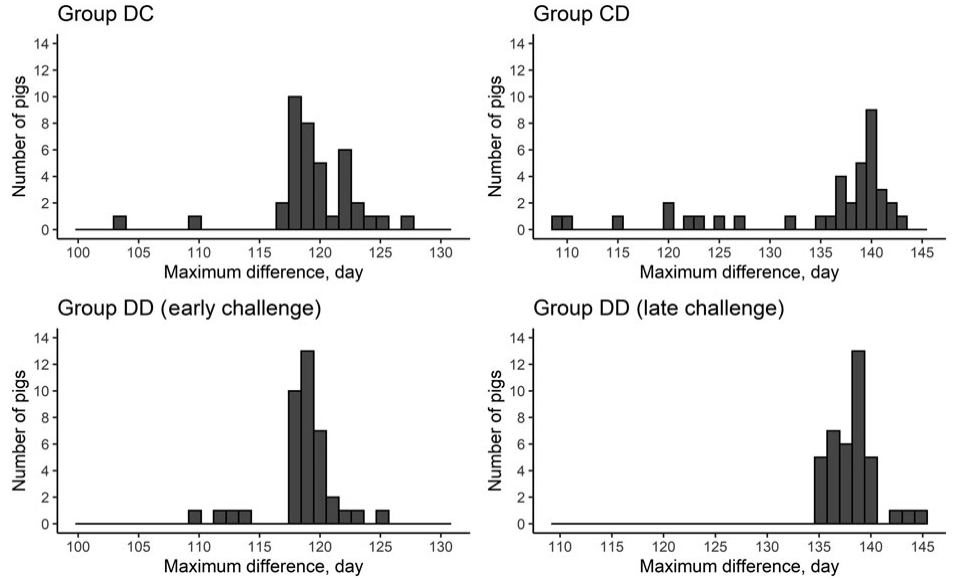 Figure 3  Capacity of the data analysis procedure to identify the day from which pigs started to recover after having received a diet contaminated with deoxynivalenol (DON). The procedure determines the day when the difference between the actual cumulative feed intake and the target cumulative feed intake is maximal. In groups DC and DD (Early challenge), pigs stopped receiving the DON-contaminated diet from 119 days of age onwards. In groups CD and DD (Late challenge), pigs stopped receiving the DON-contaminated diet from 140 days of age onwards.
Characterisation of the response of pigs to a diet contaminated with deoxynivalenol
For five pigs (four in group DD and one in group CD), the estimation procedure did not converge and data for these pigs were not considered further in the analysis.
The estimated model parameters are given in Table 2. Between the two groups receiving the DON-contaminated diet early on (i.e., group DC and the first perturbation of group DD), no significant differences were observed in the estimated values of k2 and k3. Between the two groups receiving the DON-contaminated diet later on (i.e., group CD and second perturbation of group DD), k3 was significantly lower and k2 significantly higher for pigs that received the DON challenge for the second time (group DD) compared to that of pigs that received this challenge for the first time (group CD).
The effect of age or BW can be assessed by comparing the results of pigs receiving the DON-contaminated diet early on (i.e., group DC and the early challenge of group DD) with those of pigs receiving the DON challenge for the first time later on in life (i.e., group CD). For k3, no difference was found between the early and late DON challenge (0.46 for groups DC and DD v. 0.42 for group CD; P = 0.39). However, pigs those challenged early in life had a significant lower value of k2 than those challenged later in life (0.85 for groups DC and DD v. 1.59 for group CD; P < 0.001).
The results for the calculated model parameters k1 and k4 are also given in Table 2. The k3 can be interpreted as the result of a negative effect on DFI (through k1) and a positive effect on DFI (through k4). The responses of k1 and k4 resembled those observed for k3 but were more variable. The values of k1 ranged from 10% to 346%, whereas those of k4 ranged from 0 to 246%.
The correlations between k2 and k3 for the two DON challenge periods are given in Figure 4. The correlation was moderately negative for the early challenge period (P < 0.001) and only tended to differ from zero for the late challenge period (P = 0.08).
Discussion
The capacity of an animal to minimise the effect of environmental perturbations and to quickly retrieve its pre-perturbed condition, usually termed resistance and resilience, are important elements in sustainable livestock production. The complex and dynamic nature of the mechanisms of animal's response to a perturbation makes modelling a promising approach to propose and to quantify the underlying mechanisms. This study demonstrates that a modelling and data analysis procedure can be applied to characterise resistance and resilience traits of animals, allowing to identify variability among growing pigs in their feed intake response to a DON-contaminated diet.
Estimation of the target cumulative feed intake
Determining the production potential of an animal is important for animal breeding but can be difficult to estimate because deviations of this potential can occur due to disturbances, resulting in the actually measured production trait (Berghof et al., 2018). Differences among animals in average feed intake have been correlated to heritable health-related traits (Putz et al., 2018). However, disturbances and the corresponding response of the animal may vary over time. Average performance traits are not suitable to capture the dynamic aspects of robustness, and they may even mask the underlying mechanisms of resistance and resilience. For example, a reduction in DFI may be followed by a period of full compensatory DFI and the average DFI of such an animal may not be different from a situation without a perturbation. On the other hand, an animal that is affected by a constant perturbation throughout its life will have an average production lower than its true potential without a perturbation (Berghof et al., 2018).
Table 2  Model parameters for the resistance and resilience potential of pigs that received a diet contaminated with deoxynivalenol (DON) during one or two periods 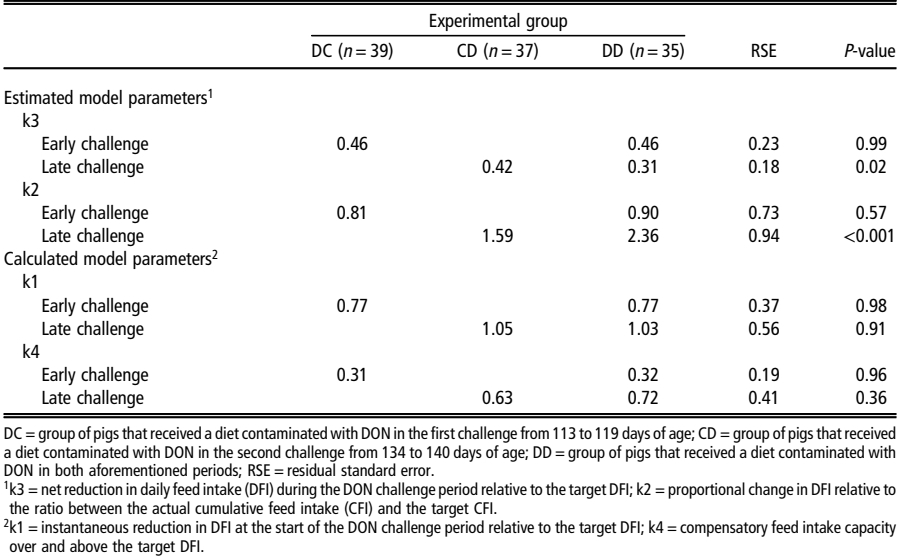 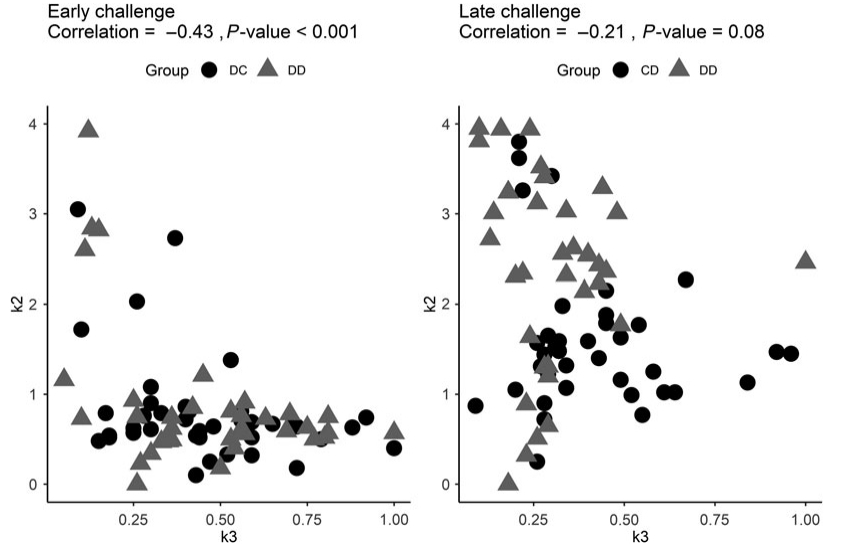 Article made possible through the contribution of Radka Borutova and Alltech