Low doses of mycotoxin mixtures below EU regulatory limits can negatively affect the performance of broiler chickens: A longitudinal study

Low doses of mycotoxin mixtures below EU regulatory limits can negatively affect the performance of broiler chickens: A longitudinal study 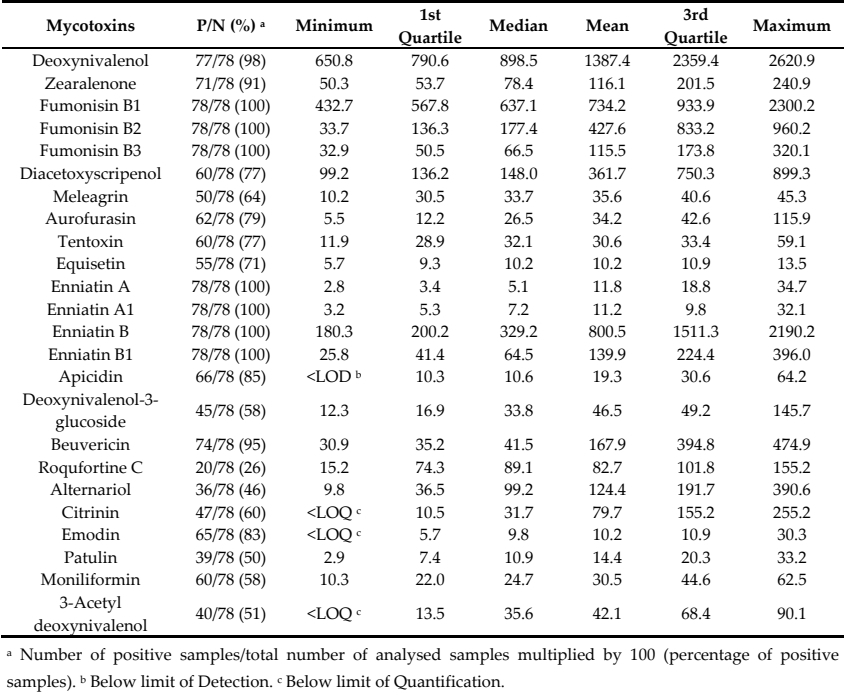 2.1. Animal Performance
The average feed intake and average body weight recorded for birds across performance trials are shown in Table 2. A significant positive correlation (p < 0.05) between feed intake and body weight was observed on Days 7, 14 and 21. However, during Days 22–28, no significant relationship was observed between feed intake and body weight of broiler chickens (Table 2). The FCR of broilers in each trial was calculated as a ratio of total feed consumed to live body weight at the end of the trial. A significantly higher FCR was recorded for birds in performance Trials 1, 2, 8, 9, 14 and 15 (p < 0.05), when compared with birds in other performance trials (Figure 1). Regarding mortality, the highest mortality was recorded for birds in Trial 1 (6%), the lowest for birds in Trial 15 (1%), while other trials had mortality rate between 2% and 4%. No relationship was found between mortality and broilers exposure to mycotoxins.
Table 2. Average feed intake (FI) and body weight (BW) of broiler chickens across eighteen trials on Days 7, 14, 21 and 28, with Pearson's correlation coefficient between body weight and feed intake. 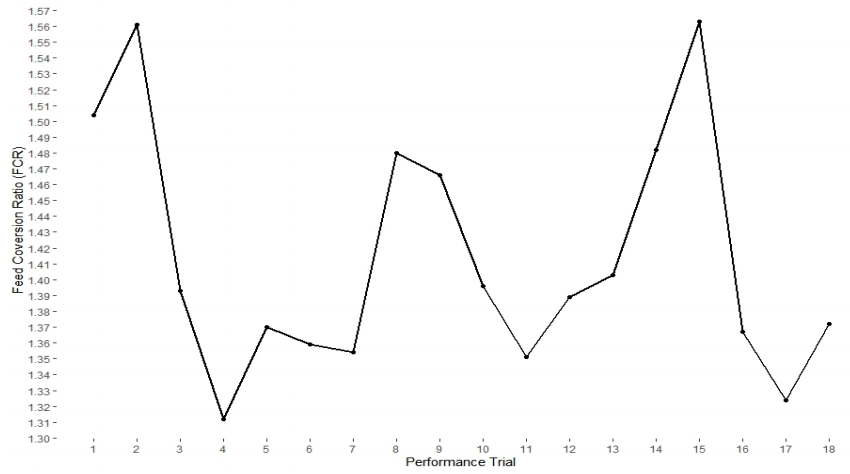 Figure 1. Feed conversion ratio (FCR) of broiler chickens fed naturally contaminated diet. FCR of broilers in each performance trial was calculated as a ratio of total feed consumed to live body weight of chicken at the end of the trial.
2.2. Impact of Multiple Mycotoxin on Broilers Performance
Mean mycotoxin levels in feed samples given to birds in each performance trial were analysed using a two-way analysis of variance, with post-hoc tests. The results show that DON, ZEN, FBs, ENNs, BEV and DAS were the only mycotoxins with significantly higher levels in feed samples given to birds in Trials 1, 2, 8, 9, 14 and 15 (p < 0.05) (Figure 2). A strong positive relationship (p < 0.05) was observed between FCR and DON (R2 = 0.85), FBs (R2 = 0.53), DAS (R2 = 0.86), ZEN (R2 = 0.92), ENNs (R2 = 0.60) and BEV (R2 = 0.73). Furthermore, a multiple linear regression model was used to explore the relationship between mycotoxin interaction and effect on broilers FCR. Three-way interaction regression models were fitted, with FCR as dependent variable and the six toxins as independent variables. The order of interaction term was based on the toxicological relevance or sensitivity of broilers to mycotoxins (i.e., ZEN > DON > FBs > ENNs > BEV > DAS), thus ten possible three-way interaction terms were evaluated (Table S3). Only the interactions among ZEN, DON and FBs (p = 0.01, R2 = 0.84) as well as ZEN, DON and DAS (p = 0.001, R2 = 0.91) had a significant effect on broilers FCR. None of the other interactions were significant. Predicted values of FCR based on the level of occurrence and interaction between toxin mixtures are shown in Figures 3 and 4. Figure 3 shows that: (a) at minimum concentrations of FBs and DON (560.8 and 650.8 µg/kg, respectively), ZEN, regardless of the concentration, had no influence on broilers FCR, but, at maximum level of DON (2620.9 µg/kg), increasing ZEN concentration had an impact on FCR values; and (b) at maximum levels of FBs (3500.1 µg/kg) and minimum level of DON, even a slight increase in the level of ZEN drastically increased the value of FCR. However, the opposite effect was true when high level of DON was present. As shown in Figure 4, the presence of maximum level of DAS (899.8 µg/kg) and minimum levels of DON caused a sharp increase in FCR as the ZEN concentration increased. The assumptions for a valid linear regression in terms of linearity of variables, normality, multicollinearity and homoscedasticity were all met. 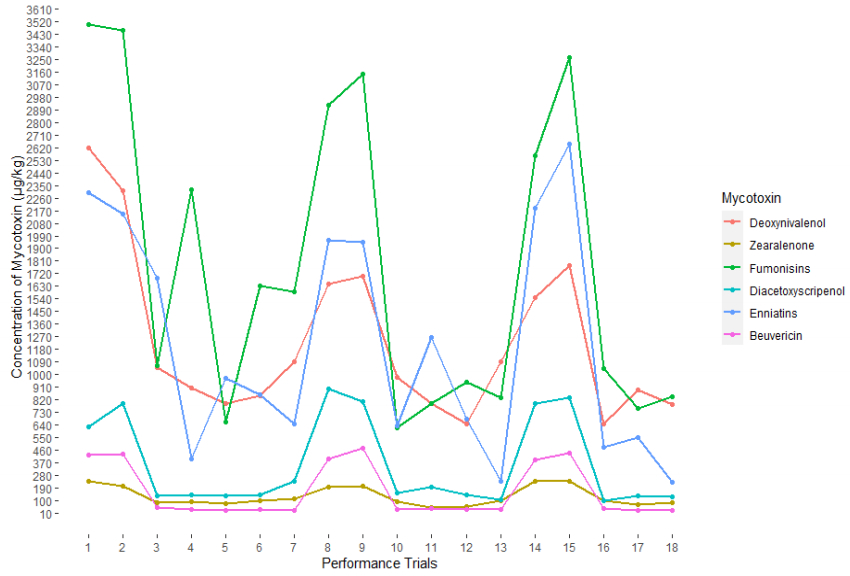 Figure 2. Mean concentrations of deoxynivalenol, zearalenone, fumonisins, diacetoxyscirpenol, enniatins and beauvericin in broiler feed samples collected from May 2017 to December 2019. In total, 18 successive performance trials were carried out during the study period. 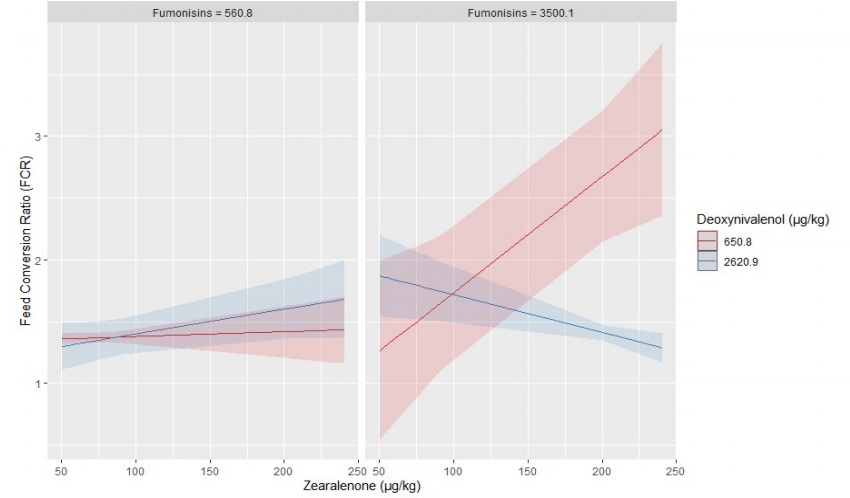 Figure 3. A three-way interaction plot with predicted values of broilers feed efficiency (FCR) based on level of occurrence and interaction effect among mixtures of zearalenone, deoxynivalenol and fumonisins. The shaded area around the fitted effects represent the 95% confidence interval. Deoxynivalenol and diacetoxyscirpenol (moderator variables) were held constant at minimum and maximum values. 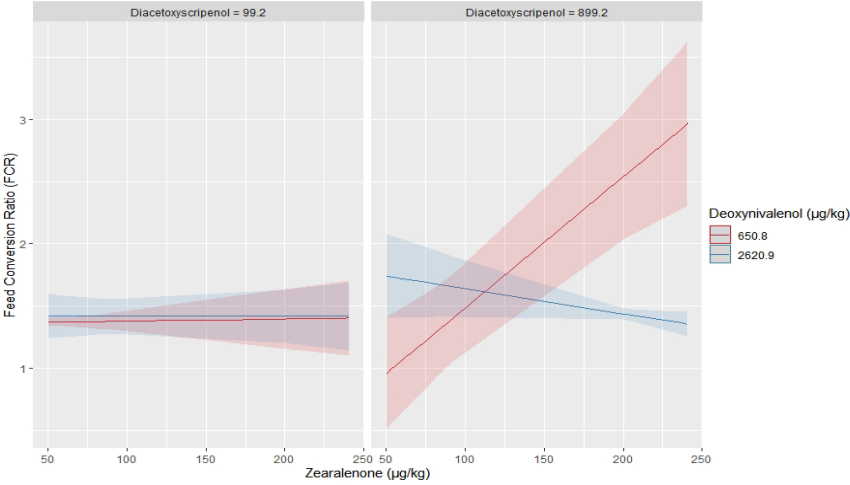 Article made possible through the contribution of C. Elliot et al.