Mycotoxins and pigs: Does low risk mean no risk?

Mycotoxins and pigs: Does low risk mean no risk? 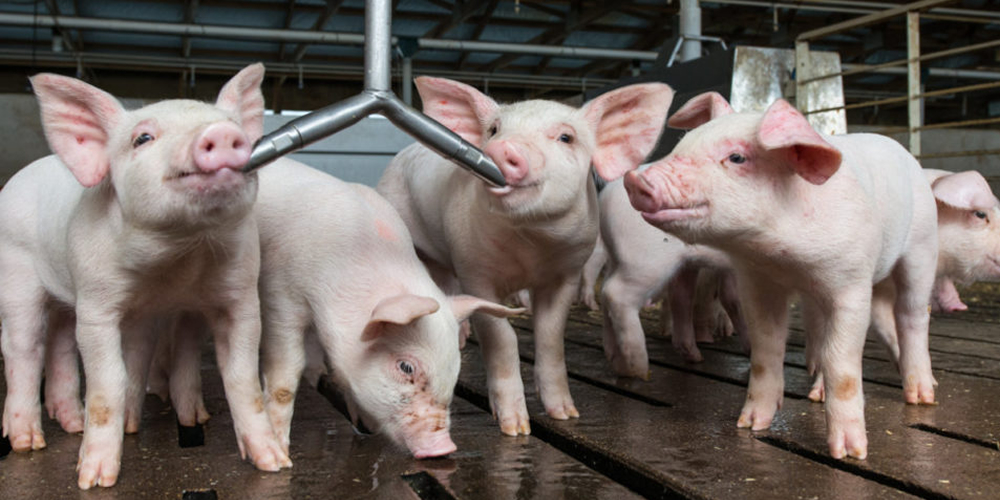 Produced by molds and frequently occurring in a wide variety of feedstuffs used in pig production, mycotoxins are a dynamic challenge that require consideration and proactive management by pig producers across the globe. Over the past four months of Alltech 37+® mycotoxin testing of corn, soybean, wheat and barley, 81% of all samples globally contained two or more mycotoxins, with an average of four mycotoxins per sample. When Alltech's Risk Equivalent Quantity (REQ) metric is applied to these results, it shows a higher risk to both nursery and breeding pigs and a moderate risk to grower-finisher pigs.

Of all the animal species, pigs are among the most sensitive to the negative impact of these unwanted toxins, and considering their high frequency of occurrence, along with the concentrations in which they are found, it is extremely likely that mycotoxins are routinely consumed by animals. Thanks to continuous innovations in mycotoxin management and control, acute mycotoxicosis outbreaks are now considered rare events in modern animal production. However, even low mycotoxin levels — which often go undetected — can be responsible for reduced production efficiency and an increased susceptibility to infectious diseases. Additionally, these mycotoxins have been known to interact with other stressors, leading to sub-clinical losses in performance, increases in the incidence of disease and reduced reproductive performance. For animal producers, these sub-clinical losses are often of greater economic importance than losses from acute effects — but, again, these lower levels are even more difficult to diagnose.

What does "sub-clinical" mean? This term describes an early stage or mild form of a medical condition, no symptoms of which are detectable.

The adverse health effects associated with the contamination of feed materials by mycotoxins may lead to acute intoxications, which can be life-threatening. More common, however, are sub-acute and, often, sub-clinical alterations of organ function that impair weight gain and reduce productivity. Some of the most significant effects of low mycotoxin concentrations can be observed in the immune and antioxidant systems, where mycotoxin contamination often remains undetected.

Mycotoxin effects on the immune system

While impeded growth and reduced productivity are economically significant, the intrinsic activity of many mycotoxins in an animal's immune system is of even more concern. The presence of moderate to low amounts of mycotoxins in daily feed rations increases the susceptibility of animals to viral, bacterial and parasitic diseases (Bondy and Pestka, 2000). This elevated susceptibility to disease necessitates an increase in therapeutic interventions with antibiotics and anti-parasitic drugs. This, in turn, increases the cost of animal healthcare and the use of anti-infective agents — particularly antibiotics — with a consequent increase in the risk of induction and the spread of antimicrobial resistance. The immunosuppressive effects of mycotoxins may also result in the incomplete protection of farm animals against viral diseases following vaccination, as their antibody formation is impaired.

Increased cellular oxidative stress is a common result of exposure to many mycotoxins, due to the associated increase in the production of oxygen and hydrogen radicals and the depletion of cellular defence mechanisms, such as glutathione (Surai, 2002). Cellular oxidative stress and enhanced radical production lead to lipid peroxidation and cellular necrosis. Many mycotoxins also affect the transport of vitamins and provitamins, which encourages lipid peroxidation, impairs vital cellular function and induces programmed cell death (i.e., apoptosis), followed by cell necrosis (Fink Gremmels, 2008). The incorporation of mycotoxins into membrane structures causes various detrimental changes that are associated with the peroxidation of long-chain polyunsaturated fatty acids (PUFAs), or lipid peroxidation. This, in turn, alters membrane permeability, flexibility and other important characteristics that can affect membrane function. Moreover, it is not currently clear if mycotoxins stimulate lipid peroxidation directly by enhancing the production of free radicals or if the increased tissue susceptibility to lipid peroxidation is the result of a compromised antioxidant system (Figure 1). 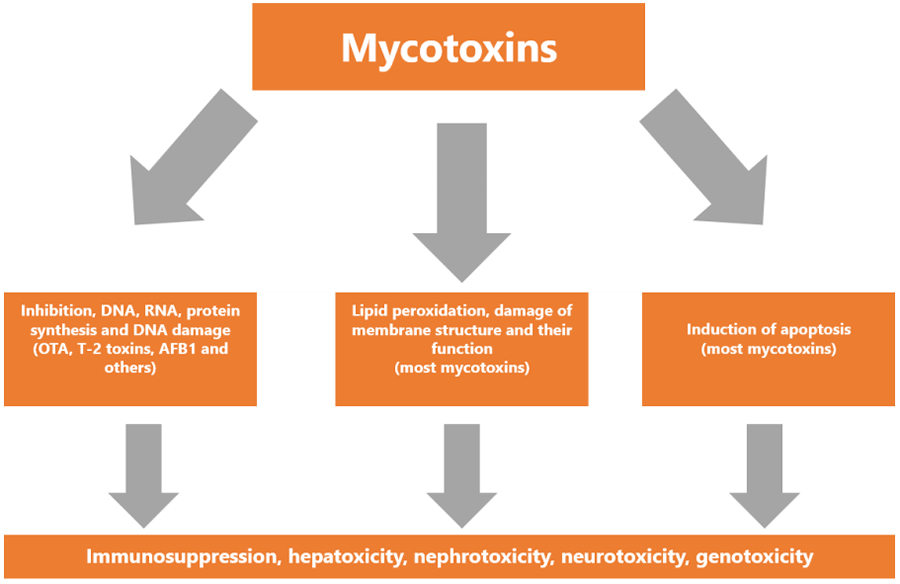 Signs that pigs may be ingesting low levels of mycotoxins:

•  The immune system being the only thing apparently affected

•  Live vaccines having harmful effects on the animal (vaccines do have the potential to become active and
cause disease, especially in animals with weakened immune systems)

•  Antibiotics used as therapeutics are not performing, even when used at higher dosages or for longer periods

•  An impaired transference of antibodies from breeding animals to their offspring

•  Respiratory diseases of unknown origin or that are difficult to diagnose

Although lower-level mycotoxin contamination may not always be of great concern to every pig producer, it is clear that, by not paying closer attention to it, the industry may be unnecessarily incurring what are often avoidable economic losses. Underestimating these long-term sub-clinical effects can notably hamper both the pig's immunity and its antioxidant status, with subsequent negative impacts on areas like productivity, reproduction and disease status.

While there has been significant progress in the area of mycotoxin control, it is still generally impossible to eliminate them entirely from the animal feed supply chain. Fortunately for pig producers, there are steps that can be taken — from crop planting to the delivery of the feed to animals — that can help mitigate the mycotoxin challenge. One of the key tools within this cycle is mycotoxin detection. Until the actual risk is identified and quantified, it can be very difficult to establish effective mycotoxin control programs or make successful use of in-feed mycotoxin binders, such as Mycosorb A+®, that are designed to remove mycotoxins from the pig's digestive tract before they have a chance to cause serious harm.

In experiment 1, 120 growing pigs (56 kg) were fed one of four diets for 35 days: without or with mycotoxins (180 µg/kg aflatoxin B1 and 14 mg/kg fumonisins) and without or with YCWE (0.2% inclusion). Pigs fed mycotoxins had reduced ADG and G:F only in the first week of the trial. Jejunal immunoglobulin G (IgG) was increased after 28 days, which tended to be reduced by the YCWE inclusion. Serum DNA damage was measured by 8-OHgG, which showed that mycotoxins numerically increased oxidative stress while the inclusion of YCWE reduced the levels of DNA damage.

In experiment 2, 48 nursery pigs (6 kg) were housed individually for 48 days. These pigs were fed one of four diets: without or with mycotoxins (180 µg/kg aflatoxin B1, 1 mg/kg deoxynivalenol and 9 mg/kg fumonisins) and without or with YCWE (0.2% inclusion). Pigs receiving mycotoxins had reduced body weight, ADG and ADFI. The reduction in ADG was recovered by the inclusion of YCWE. Mycotoxins reduced the apparent ileal digestibility (AID) of measured nutrients whereas the inclusion of YCWE increased the AID of the nutrients. Additionally, a measure of oxidative stress to proteins, protein carbonyl, was increased when pigs consumed mycotoxins but was reduced when YCWE was included during the challenge. Mycotoxins also altered intestinal villus structure, intestinal immunity and the proportion of bacteria with mycotoxin degrading ability. On the other hand, the inclusion of YCWE tended to improve intestinal structure and immunity while also reducing the proportion of pathogenic bacteria in the jejunum.

It was concluded by these researchers that the effects of mycotoxins on performance, gut health and immunity were greater in nursery pigs than grow finish pigs. However, it was also mentioned that these impacts may depend on the overall health status of the pig. Additionally, it was observed that YCWE at 0.2% had a positive effect, improving pig health and growth.

Depending on the risk of levels of mycotoxins in your animal's feeds, Alltech has a proven range of mycotoxin binding solutions that are designed reduce the risks that these unwanted toxins can poses to your herd's health and performance. Mycosorb® is designed for moderate risk situations, while Mycosorb A+ which also contains algae is designed to address higher risk mycotoxin challenges.

Please contact your local Alltech representative to find out more.

Article made possible through the contribution of Radka Borutova and Alltech