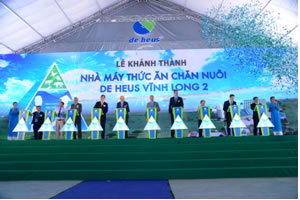 The site is Royal De Heus' seventh factory in Vietnam.

De Heus has already established a factory in Vinh Long, which specialised in aqua feed. The new factory, called 'Vinh Long 2', will produce feed for cattle, pigs and poultry.

Vinh Long 2 is the first plant with a river port. By the waterways, the logistic of incoming raw materials and outgoing finished products can be organised in a more efficient manner between Vietnam, Cambodia and the Mekong Delta.

"We are very proud on this new factory in Vinh Long," Gabor Fluit, business group director of De Heus Asia, said. "It is built and equipped based on the latest technological and production insight, this guarantees an excellent quality. Moreover, our customers will benefit from the new river port. For us, the new factory and river port are an important next step in our ambition to contribute to the further agricultural development in Vietnam."

Along with the inauguration of Vinh Long 2, De Heus Vietnam also announces its milestone as Vietnam has been chosen as the official headquarter of Royal De Heus in Asia.