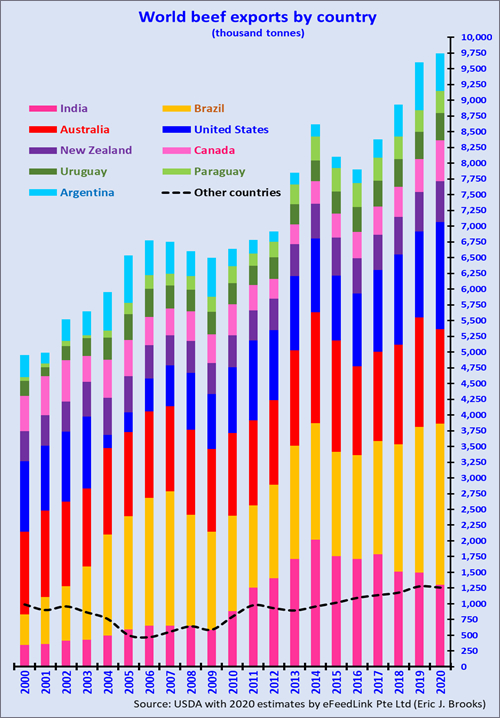 This was followed by wildcat strikes as dockworkers refused to load beef on to ships bound for China, followed by a two-week export moratorium. Fearing shortages, the government stopped all beef exports for the first two weeks of April. The loss of reputation will be felt in China, which absorbed over 75% of China's 2019 beef exports or 573,000 tonnes.
--While Argentina's government makes it difficult for China to import its beef, Australia responded to Covid-19-induced shipping disruptions by underwriting airfreight export shipments to China. Australia is also providing subsidies support to ensure that its shipping and airport infrastructure can keep exporting beef to China throughout the entire Covid-19 crisis –just as Argentine ports fall victim to Covid-19 induced wildcat, anti-China strikes at shipping ports and beef export restrictions.
Strong Chinese demand should lift Australian beef exports over their 1.4 million tonne USDA forecast and make them exceed 1.5 million tonnes. While the USDA rightly states production is being constrained by herd rebuilding, its assumption that Australian beef consumption will only decline 1.4% or 20,000 tonnes appears unrealistic, given the economic downturn's severity.
Rising unemployment will make Australian beef consumption fall by 6% to 9%, easily freeing up an additional 100,000 tonnes of beef for export. Hence, Argentina's Chinese market losses will mostly be Australia's gain, as Argentine beef exports fall below their 2020 USDA estimate of 675,000 tonnes to as low as 600,000 tonnes.
Moreover, to meet its Phase 1 trade deal export commitments to the United States, China could use Argentina's supply disruption to substitute more US beef in place of Argentine imports. Because China's Phase 1 export commitments to the US are a dollar figure rather than a physical volume, Beijing can most easily meet its trade promises to Washington by importing expensive US meats –of which beef has the highest export price.
This will entail breaking America USDA forecast of 1.43 million tonnes of beef exports and shipping a record 1.7 to 1.8 million tonnes instead –and this should not be as difficult as a Q2 beef industry stakeholder imagines: The USDA currently projects 2020 US beef consumption to stay flat, fluctuating near 12.4 million tonnes –but with Goldman Sach's stating that America's economy may suffer a -20% to -40% annualized decline in Q2 and Q3, flat US beef consumption is an overly optimistic expectation.
American beef consumption will decline by more than 400,000 tonnes (-3.2%) on-year and fall significantly below 12.0 million tonnes in 2020. That will free up additional beef for export to China. Hence, the Phase 1 trade deal and America's severe recession makes possible a 2020 US beef export increase into the 1.7 to 1.9 million tonne range.
Similarly, top exporter Brazil will happily supply China several hundred thousand tonnes more beef than it did last year. 22% of Brazil's beef exports go to China, where it accounts for 31% of imports. Thanks to Chinese demand, Brazil exceeded 2019 forecasts, exporting 2.314 million tonnes, up 14.5% from 2.021 million tonnes in 2018.
Falling Brazilian beef consumption and a downturn in Argentine exports will force China to buy more beef than it expected from Brazil. Depending on the pace of China's economic recovery, Brazilian beef exports will reach their earlier USDA forecasted 2.58 million tonnes volume –and exceed the more conservative 2.5 million tonne forecast published in April.
Supply-wise, from 2014 through 2019, beef export shipments have shifted away from India (-528,000 tonnes) and Australia (-262,000 tonnes) and towards Brazil (+464,000 tonnes), Argentina (+566,000 tonnes) and the United States (+204,000 tonnes).
For 2020, 100,000 tonnes less beef from India and 100,000 to 160,000 tonnes fewer shipments from Argentina will be offset by rising exports from Australia (+100,000 tonnes), Brazil (+266,000 tonnes) and the United States (+330,000 tonnes). Should the trade war get nastier, China may opt to buy more Brazilian beef at America's expense, but the overall import total will be nearly the same.
The USDA expects world beef exports to fall by 2%, from 10.878 million tonnes to 10.665 million this year. –But supply-wise, cattle's long maturation time means that beef production cannot be "switched off" as easily as that of poultry or pork.  At the same time, beef's impressive post-2010 performance is due to rising Chinese imports and stable East Asian demand offsetting falling western consumption.
A strong Chinese recovery will accelerate the world beef trade's eastward shift and mop up surplus supplies created by falling western consumption. We thus project 2020 beef exports rising 1.1%, to a record 11.0 million tonnes. Coronavirus be damned: Beef will keep surprising agribusiness stakeholders and enter a second decade of unexpectedly high fast growth.