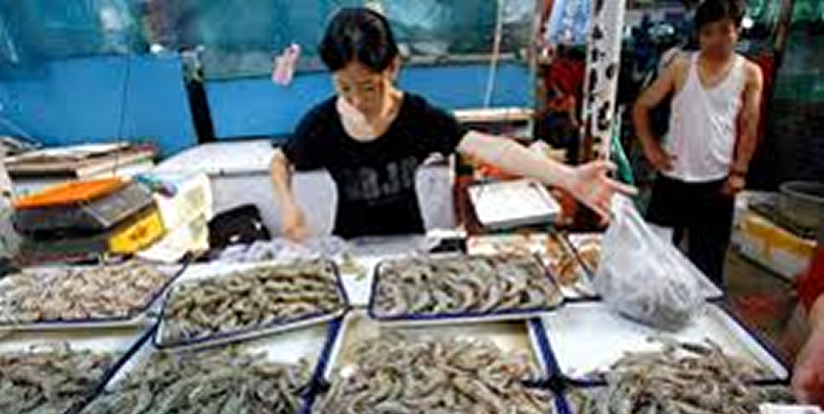 April 13, 2018
A brief survey of Chinese aquaculture
It accounts for two-thirds of world aquaculture and remains a top seafood exporter but a constellation of factors are making imports grow faster than exports.
By Eric J. Brooks
An eFeedLink Hot Topic 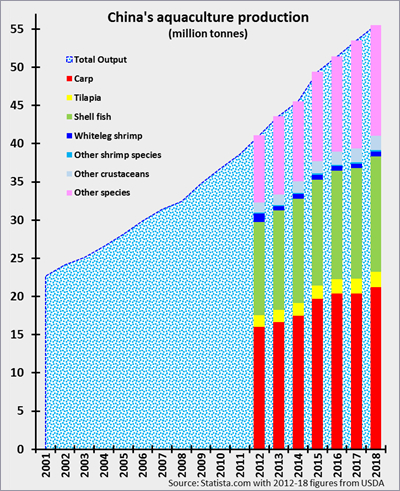 At a USDA estimated 69.96 million tonnes, 2017's seafood output is up 1.4% from 2016's 69.01 million tonnes and 67 million tonnes in 2016. Based on preliminary USDA estimates, approximately 53.46 million tonnes of this 2017's production was from aquaculture, up 4% from 51.42 million tonnes in 2016 and 49.40 million tonnes in 2015.
Among aquaculture seafood types, the 29.51 million tonnes of finfish grown in 2016 makes it the most popular category, accounting for 57.4% of output. Despite the soaring popularity of modern, high-value lines like crustaceans, traditional carp remains the most commonly cultivated species. Even though production of other species has grown more quickly, it accounts for 69% of all finfish grown and 39.6% of overall aquaculture output. Due to it millennium-spanning history of being cultivated, carp is grown in all of China's regions and provinces.
After carp-dominated finfish, shellfish species such as oysters, mussels, clams and scallops are the second oldest line. With the quantity of farmed shellfish exceeding wild catches by a factor of 18, they constitute the second largest Chinese aquaculture line after finfish. With 80% of shellfish grown in Shandong, Fujian, Guangdong and Liaoning provinces, finite cultivation competes with high demand and returns. Their production usually rises by 3.5% to 4.0% annually, from 12.2 million tonnes in 2012 to over 15 million tonnes this year.
Tilapia by comparison, is a modern, higher value line which has 96% of its production concentrated in just five southern Chinese provinces; Guangdong, Hainan, Guangxi, Fujian and Yunnan. Totaling a USDA estimated 1.78 million tonnes in 2015, 1.87 million in 2016 and 1.93 million tonnes in 2017's tilapia's production growth has decelerated from its 10%+ pace of previous decades.
Constrained by everything from lower-cost Vietnamese tilapia and pangasius imports to lower returns, tilapia production continues to increase at a roughly 3% annual rate and should total near two million tonnes in 2018. With China's own domestic whitefish consumption rising and cheaper producers competing against it, its exports are down from the 600,000-tonne range to around 400,000 tonnes today. Even so, it continues to grow about a third of the world's tilapia and more than twice as much as Egypt, the second largest producer. 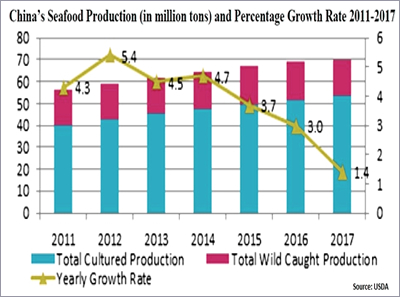 Alongside competition from Vietnamese imports, China's tilapia growers also compete for a share of the whitefish market against domestic catfish growers of species similar to pangasius. Growing by around 3% annually, China's catfish production is concentrated in Sichuan, Jiangxi, Hubei, Guangdong, Hunan and Hubei, which account for 68% of output. It has grown from approximately 660,000 tonnes in 2012 to a USDA estimated 715,000 tonnes in 2015, 739,000 tonnes in 2016 and a projected 784,000 tonnes this year.
Despite the industry's profound success and global dominance, the last five years have seen once lucrative shrimp turn into the sick man of Chinese aquaculture. In this aquaculture line, official Chinese and FAO statistics showing over a million tonnes of annual shrimp output are to be given no credence: If they were true, China would still be a leading shrimp exporter and not a top importer.
At the Global Seafood Market Conference (GSMC) held in January, panelists estimated that China's 2017 Pacific whiteleg shrimp production at 525,000 tonnes, approximately half the 1.06 million tonnes grown as recently as 2012. Devastated by diseases such as EMS and EHP, many Chinese shrimp ponds have been rendered unusable while numerous others can only sustain a fraction of their previous stocking densities.
While less popular species such as monodon or greasy back shrimp have held up their output, they cannot make up for such a steep decline in China's production of whiteleg shrimp. Thus, after peaking near 1.3 million tonnes during the early 2010s, total Chinese shrimp production across all species has stag has stagnated in the 700,000 to the 800,000-tonne range since 2013. This year will be no exception: Even if whiteleg shrimp output 'recovers' by 19% and 100,000 tonnes as the GSMC panel expects, China's cumulative 2018 output of all shrimp species would be lucky to achieve 830,000 tonnes.
While shrimp production is stuck at pre-2010 levels, consumption has jumped from 700,000 tonnes in 2005 to an estimated 1.9 million tonnes this year. Consequently, a country that was once a leading shrimp exporter is now the top importer. While India and Ecuador officially export approximately 30,000 tonnes of shrimp to China annually, import volumes ten times higher than official figures are smuggled in through Vietnam.
A similar story is underway with tilapia and especially pangasius, whereby lower cost Vietnamese supplies are smuggled into China and do not appear in official statistics. According to buyers and traders, the cost of imported Vietnamese now acts as a ceiling on the selling price of domestic tilapia.

The increasing import dependence for supplies of value-added lines such as salmon, shrimp, and whitefish is part of a larger, gradual process underway: Despite having 19% of the world's population and 67% of world aquaculture output, China's appetite for seafood exceeds even its dominant production share.
While frontier seafood cultivation regions have been dwindling for some time, the USDA notes that 2016 was a type of watershed year: With the best aquaculture zones already developed and facing political pressure from urbanization and environmental concerns, China's aquaculture growing area stopped expanding. A 6.5% reduction in marine cultivation and 0.5% decrease in freshwater cultivation produced a 1.4% drop in overall aquaculture acreage.
In its early 2018 GAIN report on China's seafood industry, the USDA reported that "Following serious pollution caused in some provinces during 2016, such as Zhejiang on the eastern coast of China, the government closed some aquaculture farms and compensated farmers for the closures. The government also designated some coastal line/offshore waters as special marine species protection areas or eco-repairing regions. In Hubei and Hunan provinces, the freshwater aquaculture area declined significantly as the government banned or limited aquaculture farming in many reservoirs and large lakes since 2016. In addition, farmers are facing higher rental rates to use water resources (including ponds and ocean waters) which are chipping away their profits and limiting their ability to expand aquaculture farming."
At the same time, the production problems faced by mature lines such as shrimp imply that for many seafood lines, stocking densities cannot be increased much higher. No one expects China's shrimp production to ever match its consumption again. With China's 13kg per capita seafood consumption expected to triple by 2050, production of many whitefish, salmon and many other aquaculture lines will not be able to keep up with demand.
The inevitability of this long-term secular trend can already be seen in Chinese seafood trade statistics. While it continues to enjoy a healthy overall seafood trade surplus, rapid export growth is tapering off but the value and volume of imports continue to grow. For example, after leveling out around 3.85 to 4.00 million tonnes for a few years, China's 2017 seafood import volume continues to fluctuate in the 3.9 million tonne range.
According to the USDA, in the first ten months of 2017, China's seafood imports increased 10.8% by volume (to 2.17 million tonnes) and 16.9% by value (to US$6.6 billion). –Nor do these trade statistics take into account smuggled in imports of lines such as shrimp or whitefish. Hence, the real seafood import level is somewhat higher than recorded.
While exports still enjoy a wide lead over imports, they rose by a mere 3.9% in volume (to 3.29 million tonnes) and 2% by value (to US$6.6 billion).
The tendency for both the volume and value of imports to increase faster than exports started about five years ago. The next few decades will see China's per capita seafood consumption multiply while its maxed out aquaculture acreage remains roughly constant. It implies that by the late 2020s, for an increasing number of seafood lines the world's dominant aquaculture producer and exporter will also become its leading importer and price setter.