White Feces Syndrome (WFS) is the cause of significant crop failures of white shrimp in Indonesia, Thailand, Vietnam and India. The present series of field trials in collaboration with shrimp producers in Malaysia and Indonesia, aimed at evaluating the potential role of a health promoting feed additive in WFS prevention and treatment. 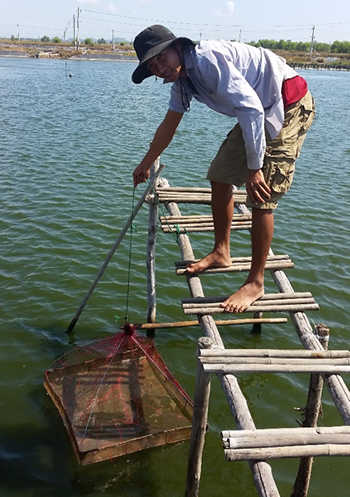 In 2016, White Feces Syndrome (WFS) has been reported to be a disease problem affecting significantly shrimp farmers in Indonesia, Malaysia, Thailand, Vietnam, and India.  WFS has been reported since 2010 in Penaeus monodon. From early times, the development of WFS has been related with the presence of high loads of organic matter in the culture pond caused by high stocking densities and high water temperatures resulting in higher feeding rates. The improvement of hygiene and biosecurity measures are helping to reduce the severity but in some cases are not enough to stop the condition and its effects.

WFS is easily identified by the presence of white strings in the surface of the water and edges of the pond, and affected shrimp show white hepatopancreas and gut. The disease is mostly associated with the described initial acute symptoms, followed by chronic mortalities and stunted growth that will heavily affect the yield of the culture. Different potential pathogens have been associated with the appearance of WFS, including microsporidian parasites, bacterial pathogens and gregarine-like inclusions, but till date WFS could not be induced under controlled conditions by a specific pathogen.

The affection of the digestive system (hepatopancreas and gut) leads to malnutrition. After a strong WFS outbreak, growth is never recovered to the pre-outbreak levels, typically around 0.25g/day in South East Asian intensive shrimp farms. Although some farm strategies manage to restore the macroscopic condition of the hepatopancreas and gut, growth continues to be stunted. As a result, WFS outbreaks cause many production cycles to fail since farmers prefer to harvest instead of growing WFS affected animals which show slow growth and poor feed conversion.

Functional feeds containing gut health promotors deliver with every meal an adequate concentration of natural antimicrobial activities into the digestive system. These feeds are a key component of any strategy to prevent diseases in aquaculture, particularly where opportunistic bacteria are suspected to be a major cause of mortality. However, the success of this approach will depend on the efficacy of the gut health promotor. The gut modulating feed additive ideally is heat stable and can therefore be easily incorporated into industrial aquafeeds and be present in every meal from the starter feed onwards, without requiring major adaptations of the production protocols. Natural feed additives combining different action mechanisms such as direct bactericide/bacteriostatic properties as well as Quorum Sensing Inhibition (QSI) properties at concentrations below MIC, are most promising to control bacterial diseases caused by opportunistic bacteria such as Vibrio spp. The inclusion of such botanical feed additive under standard industrial conditions at the feed mill improved survival under production conditions in a semi-intensive shrimp farm in Panama and Ecuador with 18 to 24% compared to the control group during two independent production cycles (Cuellar-Anjel et al., 2011; Valle and Coutteau, 2015). In these production trials, the main disease challenge at the farm consisted of White Spot Disease (WSSV) and Vibriosis. The gut health promotor was applied from the first starter feed onwards and continued throughout the entire cycle till harvest. Loc et al. (2015) was able to confirm the effect of a synergistic phytobiotic product in a controlled challenge trial with Vibrio parahaemolyticus (Early Mortality Syndrome, Acute Hepatopancreatic Necrosis Disease, EMS/AHPND strain) under laboratory conditions; showing 62-107% increased survival in shrimp that had received the additive during 3 weeks prior to the experimental infection, compared to unsupplemented control groups. Furthermore, the addition of the phytobiotic product in the diet resulted in consistently lower Vibrio spp counts in the shrimp's digestive system compared to the control, illustrating the capability of gut modulating additives to protect the shrimp's gut microbiota throughout a Vibrio spp challenge. The inclusion of natural products with bactericidal and quorum quenching activities is an important factor in current bio-security protocols to prevent the vertical spread of opportunistic bacterial pathogens such as Vibrio spp, Photobacterium spp, Flavobacterium spp, Tenacibaculum spp. Furthermore, a healthy gut microbiota enhances the overall health status and immune defenses, which may explain the positive effect of gut modulators on reducing the impact of certain endo as well as ectoparasites on productivity in fish and shrimp. 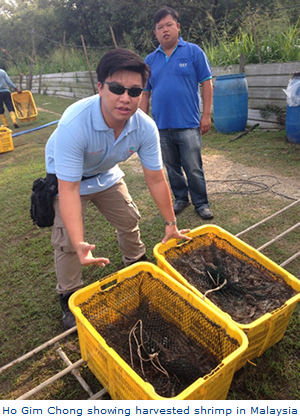 The three field studies reported in this study explored the preventive and/or curative effect against WFS of a health promoting, functional feed additive with broad spectrum activity (SANACORE® GM, Nutriad), added to the feed either at the farm by top-dressing or at the feed factory, or a combination of both strategies.  Field trials were executed in close collaboration with shrimp producers following standard operational procedures in Malaysia and Indonesia.

The first trial was conducted in a shrimp farm located in the Penang region, Northern Malaysia. The farm was historically affected by EMS and WSSV outbreaks, as well as WFS, usually around day of culture (DOC) 60. The trial followed standard operation procedures of the farm and was run in 8 ponds in total, 6 as treatment and 2 as control. For the treatment ponds, the functional feed additive was top-coated in the farm and applied to the ponds since the first day of culture in all feedings until harvest. Due to mortality and stunted growth, the control ponds were harvested at DOC 42, while treatment ponds were continued and harvested as planned at DOC 129. Production data for final mean body weight (MBW), survival (SR), and feed conversion ratio (FCR) are shown in Figs 1 & 2 and Table 1. The average harvest yield in the treatment ponds was 13.6 MT per ha, whereas the control ponds resulted only in 1.7 MT per ha due to the emergency harvest. 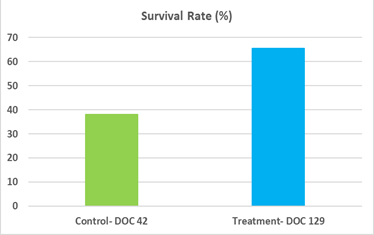 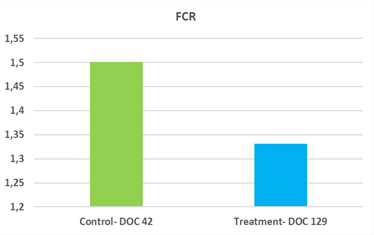 The trials in Indonesia were conducted in 2 different farms located in the Subang-Karawang regions in Northern Jakarta, an area that is heavily affected by WSSV and WFS. In both farms, the previous two crops were aborted with an emergency harvest due to stunted growth and mortality of the shrimp caused by WFS.

The second farm trial aimed at evaluating a preventive protocol for the application of the functional feed additive through the addition of a basal level via the feed, complemented during specific WFS episodes by additional dosage via top-coating application at the farm.  However, the protocol was adapted during the trial due to late arrival of the treatment feed and the additive. As a result, the first exposure to the feed additive in the treatment group started only at DOC 20. Furthermore, the incidence of a WFS outbreak around days 23-26 in the treatment ponds and its subsequent successful curative treatment with boosted levels of the feed additive during one week, resulted in the decision of the farmer to treat also the control ponds when they exhibited WFS on DOC 28.

The application of the curative protocol to the control ponds avoided their flushing and maintained them in the trial.  All ponds, control and treatment, received 7 days of boosted levels of the feed additive as curative treatment, followed by standard diet (control ponds) or standard feed supplemented with prevention dosage of the feed additive (treatment). Recovery from WFS happened in both control and treatment. However, subsequent daily growth was significantly different for treatment and control groups. Whereas the control group did not recover growth, the treatment group recovered average daily growth to acceptable levels within 20 days following the curative treatment (Fig. 3 &4).

During DOC 60-80 approximately, a reduction of growth was detected in both groups which could be ascribed to a reduction of feeding rates in the farm due to operational issues. Similar to the trial in Malaysia, the harvest was advanced to DOC 85 in control ponds due to the stunted growth, while treatment ponds were partially harvested on DOC 85 and finally harvested at DOC 100. Comparing results, final survival was improved in 10% (Fig. 5). Shrimp size of the treatment group was increased with 25% compared to the control group at DOC 85, and 42% at the final harvest of treatment group at DOC 100 (Fig. 6 and Fig 7). The treatment ponds yielded 70% more biomass than the control ponds at final harvest (Fig. 8).

A third trial was run as a confirmation trial without control in the Northern Jakarta area. The farm had suffered crop failures during two subsequent stockings prior to the trial caused by WFS in combination with WSSV and other diseases. Due to the high probability of failure, the farmer did not accept to maintain control ponds and decided to run four ponds with the treatment proposal. In this trial, the preventive protocol was fully followed with the addition of the functional feed additive to the feed from the arrival of the shrimp in the grow-out ponds.  In this trial, a first, mild outbreak of WFS occurred rather late at DOC 62-66. No additional curative treatment was applied and the shrimp recovered without subsequent stunted growth. This promising outlook made the farmer decide to continue the culture in all four ponds. During DOC 83-88, a second outbreak of WFS appeared, which induced the farmer to harvest.

Final harvest results of both farm trials in Indonesia are compared in Table 2. The preventive approach using the feed additive (trial 3) showed a very interesting performance with survival amounting to 68% in average for the 4 ponds, despite the absence of any curative treatments during two outbreaks of WFS, in an area where previous crops failed repetitively. The curative approach using the feed additive (trial 2) showed a clear impact on survival and productivity, with a 10% improvement of survival at harvest despite the 15 days longer period of culture. However, comparison is difficult since the control shrimp also received the curative treatment during 7 days when WFS outbreak occured before DOC 30.
CONCLUSION

The current farm trials were performed in "black" areas, i.e. culture areas where previous cycles failed repetitively before the trial. This was confirmed by the need to execute emergency harvests on the control ponds in two trials due to high mortalities and / or stunted growth.

These trials demonstrated the capacity of the functional feed additive treatment to delay or control the severity of WFS outbreak, and - most importantly for the farmer -  recover the shrimp growth to normal levels following the WFS event. The inclusion of the additive showed the improvement of the production yield, especially when applied as a preventive strategy since the first day of stocking, thanks to improved growth as well as survival. Furthermore, the curative treatment showed very positive effects, even when applied only during the WFS outbreak.

The results were achieved in different farms and countries, were production strategies, daily routines and farming conditions are different. This further confirms the broad spectrum action radius of the feed additive and its capability to reduce the impact of WFS on economics of shrimp farming in SE Asia.