Highlights of trace mineral use

Trace minerals are added to animals' diets to ensure animals receive the necessary amount of minerals to support internal functions. While oxides and sulphates served as the original mineral additives, more bioavailable types of trace minerals, like organic and hydroxy trace minerals, were developed to provide better performance. All types of trace mineral have to be free in the intestine to be absorbed by the animal. Mineral types have different chemical structures, which influences the solubility, reactivity and bioavailability of nutrients. Trace minerals, like sulphates, that dissolve in a neutral pH are more reactive to moisture and other dietary components, while more stable minerals such as organic or hydroxy trace minerals are less likely to dissolve outside of the digestive tract. Reduced solubility allows more mineral to be deposited where it needs to be absorbed by the animal's system. More reactive trace minerals also can interact negatively with other dietary nutrients and interrupt the function of some feed additives. 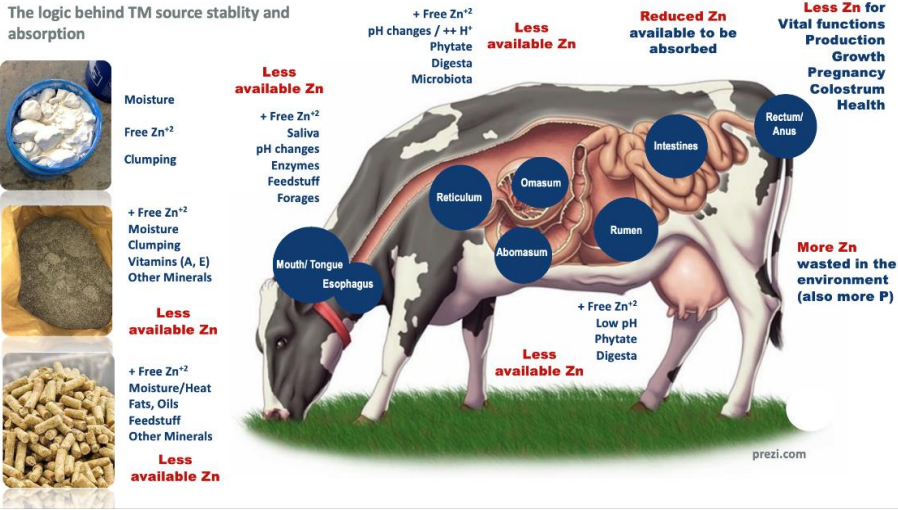 Figure 1: Different kinds of trace minerals have different types of bonds, which changes their stability, solubility and reactivity. Minerals that are more reactive, or dissolve in a neutral pH can bind to other nutrients or elements making them unavailable for the cow. 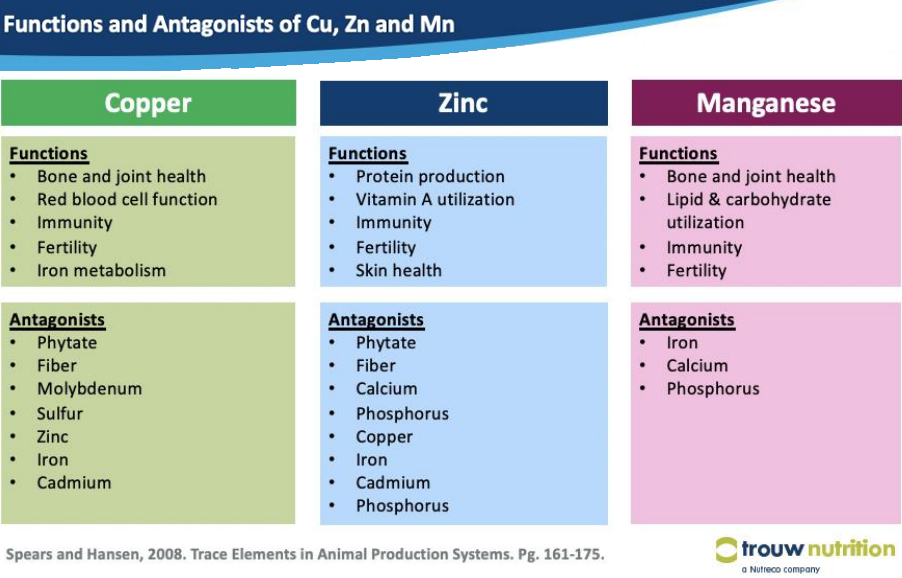 Figure 2: Trace minerals support several bodily functions like the immune system and red blood cell production, but they can also negatively interact with other important nutrients including iron and calcium.

When referring to bioavailability in trace minerals and animal nutrition, "bioavailability" is the efficiency with which an element is absorbed in a usable form by the animal. Different biomarkers can be tracked to determine how much of a mineral is actually used. Multiple studies have explored the bioavailability of various trace minerals by source when fed to cattle and dairy cows. In a project at North Carolina State University published in 2004, researchers explored the use of different types of copper trace minerals in the diets of growing cattle.1 In the trial, 60 steer received diets with one of four copper supplements – 5 or 10ppm copper sulphate or 5 or 10ppm hydroxy copper – for 98 days. Liver samples were taken before the trial started and on day 98 to check for copper level. The liver biopsies demonstrated that cattle taking the hydroxy copper supplement retained almost twice the amount of copper. 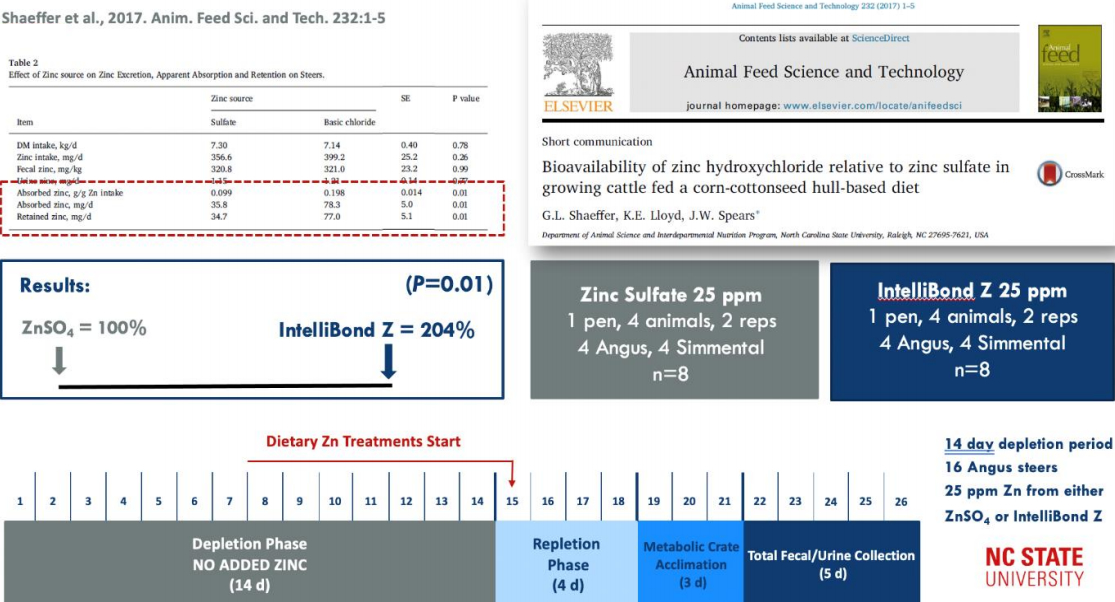 Figure 3: Hydroxy zinc provides about twice the absorption and retention rate when compared to the use of zinc sulphate in cattle diets.

Researchers also looked at the influence of trace minerals on metabolism, performance and stress markers in cattle and dairy cows. In a trial done at Cornell University in 2014, researchers supplemented transition dairy cows with copper, zinc and manganese using sulphate minerals, a combination of 75% sulphate and 25% organic minerals or hydroxy minerals.3 They found that dairy cows on only the hydroxy minerals had lower plasma TBARS throughout the study, a reduced oxidative stress response, smaller total antioxidant production and were quicker to reach peak milk production. 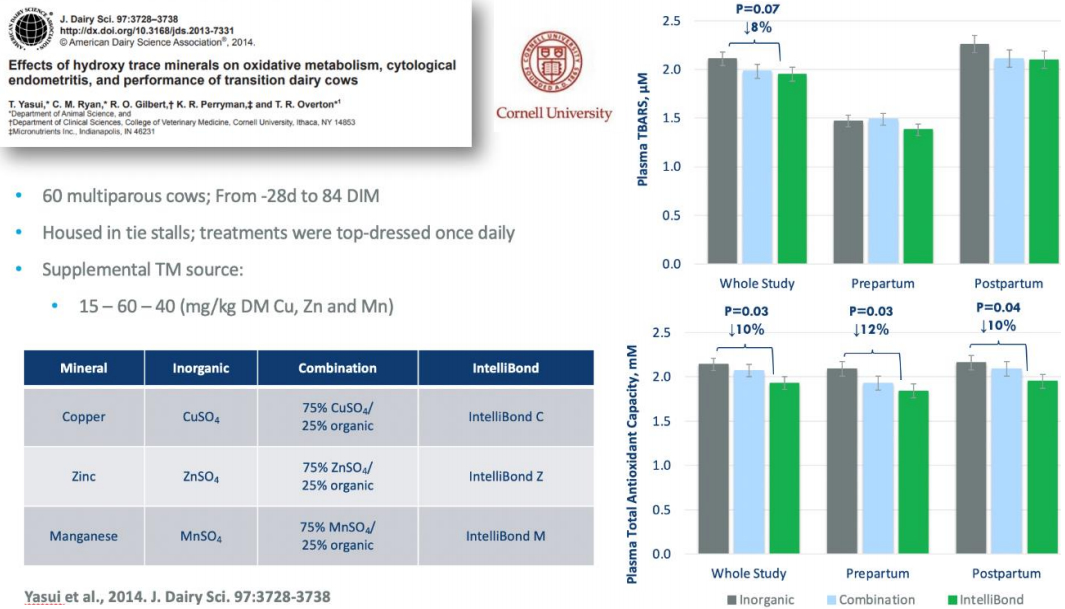 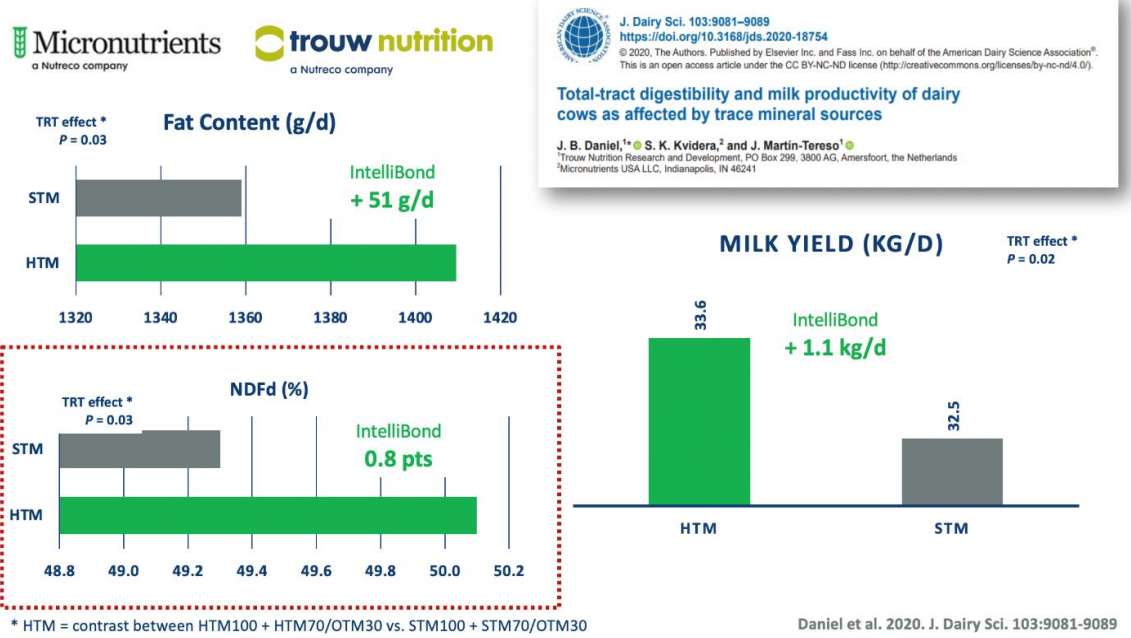 Predictability and mineral use

Cattle and dairy cow diets are often formulated using NRC mineral requirements. These are established by combining the amounts predicted to support animals through growth, maintenance, gestation and lactation periods. However, the calculations involved are known to be imprecise and ruminants only absorb a fraction of the total mineral provided. How much of a supplemented mineral is available, when the mineral is free for absorption and mineral uptake can be altered by internal and external factors making it hard to predict how much is used.

Sustainability and predictability: Factors to consider when adding trace minerals to the diet

Several elements must be considered when supplementing animal diets with trace minerals, including how much mineral is provided in the basal diet, any potential dietary antagonists, mineral palatability and costs. All of these considerations are easier to determine if the mineral being used is more predictable in how it functions within the animal. Supplementing feeds with minerals that are more stable makes their use more predictable.

While an important mineral for cattle, some forms of manganese are poorly absorbed, which means any potential change in absorption could greatly alter how much is delivered. Additionally, the NRC's recommended level may be too low. Using a more stable and predictable form of manganese, like hydroxy-based manganese, could allow for more precision in diet formulation. Similarly, providing a stable copper source in diets may make a challenging situation slightly easier to navigate. Antagonists to the trace mineral can be difficult to manage and feeding diets with reactive copper can make it hard to navigate the line between providing not enough copper and too much copper. In an examination of beef and dairy cattle feeds, a number of diets included toxic levels of the mineral.6 However, hydroxy copper, has demonstrated almost twice the relative bioavailability of copper sulphate potentially making it easier to use with precision.7

Using a stable source of zinc, like hydroxy zinc, in ruminant diets makes it easier to provide the desired amount of the mineral. In testing, hydroxy zinc demonstrates twice the relative bioavailability of zinc sulfate.2 As there are potential gut health benefits from increasing the amount of dietary zinc without raising the amount excreted, using a more bioavailable form could satisfy both needs.

"Trace mineral requirements are a moving target and not very easy to establish - more is certainly not always better," said Jeanne Boekhorst, regional ruminant manager for Asia-Pacific. "There are a lot of factors that need to be taken into account and often we don't know all these factors, so predictability of your trace mineral source is really key."

Stable trace minerals can provide more predictable results, she said during the webinar. Adding, "A good example of a stable trace mineral source is IntelliBond [trace minerals], which we know, we've got the data, the peer-reviewed data – they have a higher relative bioavailability compared to sulphates."

However, there also can be other benefits from replacing the use of inorganic trace minerals with alternative forms that have better stability. Future presentations are set to address these advantages.

The next webinar in Selko's Global Webinar Series is, on digestibility and is set for May 6.