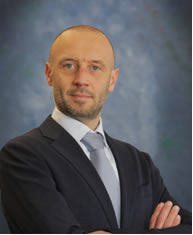 Erik Centen has been promoted to the position of managing director for CTB's Instruments and Controls Group, according to Victor A. Mancinelli, chairman and chief executive officer for CTB.

In his new position, Centen will oversee all aspects of CTB's Instruments and Controls Group (ICG) business unit and will be responsible for worldwide growth. The business unit includes CTB's AgroLogic and Fancom brands.

Centen previously led the financial operations for ICG as well as overseeing its IT team since joining the company in 2018. Prior to joining CTB, Centen worked for one of the world's largest dairy companies where he had progressively greater responsibility culminating in management of that company's supply chain. His education includes a combination of economics concentration and financial controlling from Wageningen University in Wageningen and Fontys in Eindhoven, both in the Netherlands.

Centen is a native of the Netherlands where he resides in the village of De Mortel.